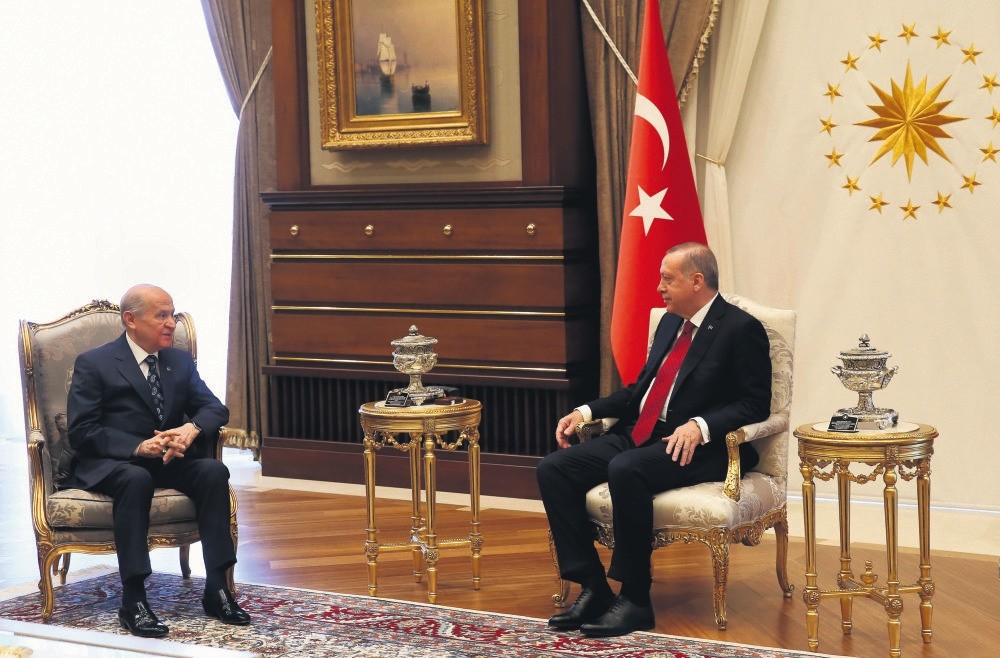 President Recep Tayyip Erdoğan and Nationalist Action Party (MHP) Chairman Devlet Bahçeli announced their agreement to bring the presidential and parliamentary elections up to June 14, 2018. This decision for early elections was an unexpected development for many in Turkey. The AK Party has a clear principle and policy that favors holding all general elections as scheduled. On various occasions, AK Party officials have mentioned the party's willingness to hold the elections on Nov. 3, 2019, as scheduled. Bahçeli's call for early elections found support from Erdoğan and AK Party officials this time. This is mainly due to the political ambiguities and uncertainties that could spring up by delaying the transition to the presidential system. The transition to the presidential system and its adaptation to the new conditions may take some time even after the presidential election, but early elections will be a stimulant to accelerate the transition process. This decision will also help to reduce certain risks in international relations and domestic politics and stimulate the bureaucratic transformation, which will save Turkey at least one year for much-needed economic reforms.

Early elections will motivate the transformation within the bureaucracy and accelerate the shift to the presidential system. Many people, especially in the business community and investors, complain about the sluggishness of the bureaucracy in Ankara. In these transition conditions, those in the bureaucracy do not want to take any risky initiatives that could have positive consequences for the country. This limbo leads to the postponement of necessary structural reforms for the economy, education, law and many other fields that are needed to strengthen and stabilize Turkey's competitive edge. Early elections will help to shorten the period of bureaucratic limbo and will provide more time and space for reforms.

Reducing political uncertainty and increasing resilience against economic shocks as well as possible regional diplomatic crises related to Syria and Iraq is a major concern for Erdoğan. Uncertainties related to the future of Syria create long-term security risks for Turkey. Ankara tries to maintain balanced relations with both Moscow and Washington, but the increasing tension between those two countries over Syria puts pressure on Turkey to choose sides in Syria. The tension between the U.S. and Russia is not limited to Syria, as it seems that relations between the two will be further polarized on a number of other issues in the near future. Ankara tries to maintain balanced relations with these two major actors while also trying to increase economic and political cooperation with Moscow.

U.S. President Donald Trump's unpredictable and confusing moves with regard to the Middle East make it more difficult for Ankara to stabilize relations with Washington at the moment. The White House and the Pentagon's contradictory statements about Washington's Syria policy is another tricky issue for Ankara. Erdoğan does not want to find himself in the middle of a crisis with either Moscow nor Washington while he would be focusing on the critical 2019 presidential campaign. Early elections will reduce the time for distraction for decision makers in Ankara while they are dealing with the sensitive foreign policy issues that could have long-term impact on Turkey's national security. If re-elected, Erdoğan, with his newfound presidential powers, will stand as a greatly strengthened political actor in dealing with his international counterparts.

Reducing the risks and potential burdens of political alliance between the governing AK Party and MHP is a matter of concern for both parties. This political alliance started to take form after the Gülenist Terror Group- (FETÖ) led coup attempt on July 15, 2016. Erdoğan and Bahçeli have maintained it throughout the transition process for the presidential system, but the social and political bases of both parties are different and the local representatives of both parties may request more autonomy in the regions where the two parties compete against each other. There are certain elements of discord in this alliance, and trying to maintain it and keep it strong until 2019 could be costly for both parties. It would be better for both parties' interests to create autonomous policy lines after the presidential and parliamentary elections.

Both parties may continue to agree on certain principles and issues, but they may also want to state their points of departure more comfortably, which their constituents expect from them. The alliance between the two parties may reflect a substantive political influence in Turkish politics, but the total support for AK Party-MHP alliance is less than the sum total if we consider each party separately. The AK Party and MHP may more comfortably clarify and reframe the scope of their alliance on the basis of joint interests and shared principles when the election pressure is gone. It is therefore reasonable for the leaders of both parties to go to early elections when the popular basis of their alliance is solid and strong. There are always political risks in elections, but both Erdoğan and Bahçeli feel politically strong enough to take this challenge earlier than originally scheduled.