Half-hearted EU enlargement in the Balkans 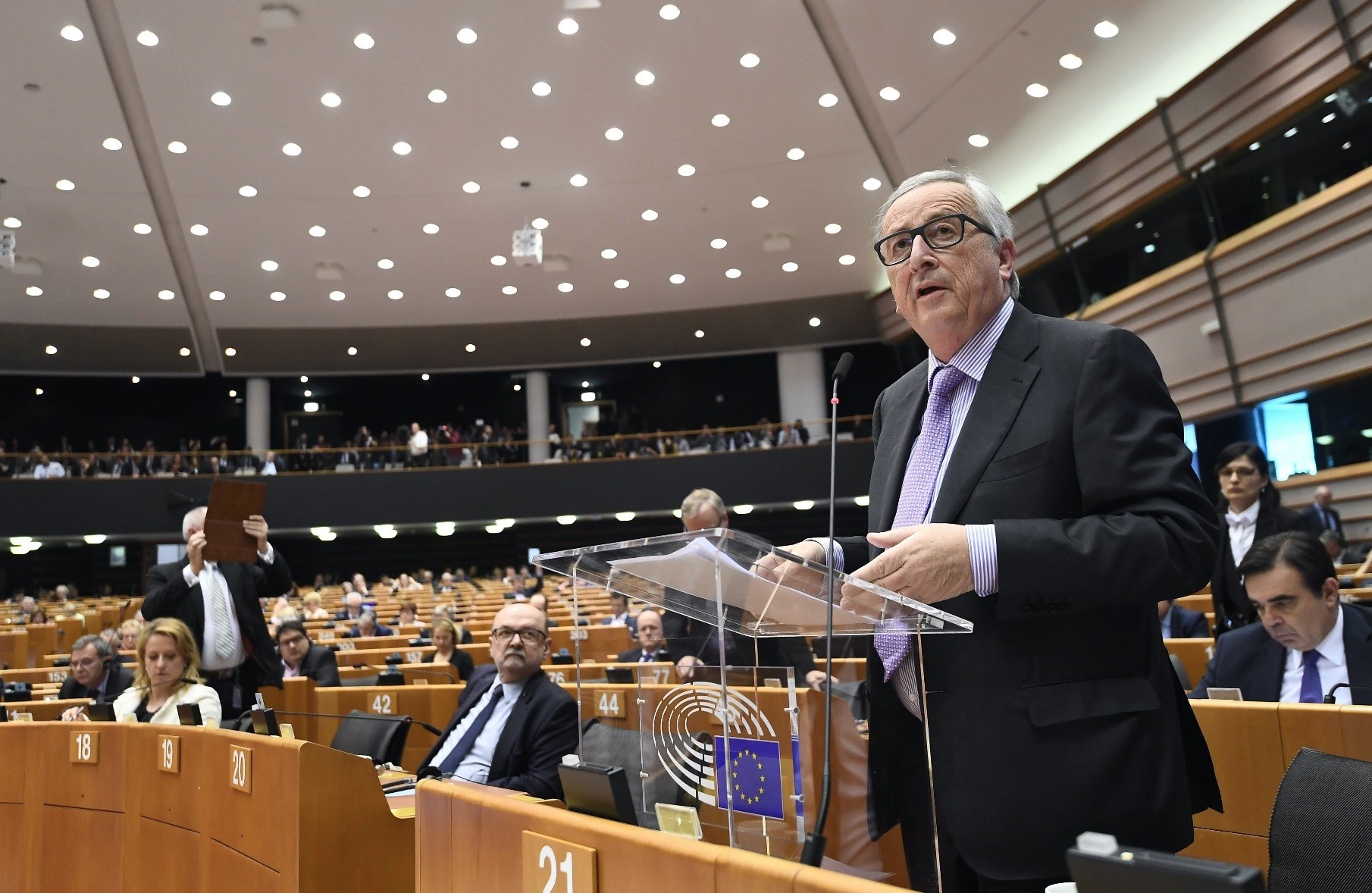 EU Commission President Juncker delivers a speech in the European Parliament, Brussels, May 2.
by Teoman Ertuğrul Tulun May 14, 2018 12:00 am

European Union Commission President Jean-Clade Juncker is reported to have declared in a very recent interview (published in the Dutch daily newspaper Trouw) that, "We Europeans sometimes think that we are the boss of the world," but that, "we forget that we are a small and weak part of the universe. We are losing economic power. We are slowly but surely falling from 25 percent of global gross national income to 16-18 percent" and "we are on the losing side also demographically." Juncker also added that "we exist culturally, but we are not dominant. So I always invite everyone here to a more pronounced modesty. We must indeed listen to the rest of the world."

It is possible to find the trace of Juncker's rather gloomy characterization of the declining role and influence of Europe in the strategy recently announced by the EU Commission on the EU engagement toward the "Western Balkans." The strategy considers the EU enlargement process in the region as the part and parcel of the larger strategy to strengthen the EU by 2025. In this respect, the EU Commission first adopted the strategy in February 2018 under the title of "A credible enlargement perspective for an enhanced EU engagement with the Western Balkans." Afterward, on April 17, 2018 in Strasbourg, the 28 member College of Commissioners recommended to the EU Council to open accession negotiations with Albania and Macedonia, in the strange terminology adopted by the EU upon the insistence of Greece: the "former Yugoslav Republic of Macedonia." The EU has been, on paper, extensively engaged with the "Western Balkans" since the 2003 Thessaloniki EU Council summit. The term "Western Balkans" was initially employed by the EU policy makers in order to describe the part of the Balkan Peninsula that remained outside of the European Union. It included seven states that were formed after the breakup of Yugoslavia (Bosnia-Herzegovina, Croatia, Kosovo, Macedonia, Montenegro, Serbia, and Slovenia) and also Albania.

The said strategy underlines that the prospect of EU membership for the "Western Balkans is in the Union's very own political, security and economic interest." It describes such an enlargement as "a geostrategic investment in a stable, strong and united Europe." The strategy of the EU, while explaining the respective European paths of the "Western Balkan" countries, describes Montenegro and Serbia as "the current front-runners in the process." Albania and in their biased terminology "the former Yugoslav Republic of Macedonia" are labeled as countries "making significant progress on their European path" of which "the Commission is ready to prepare recommendations to open accession negotiations, on the basis of fulfilled conditions." As for Bosnia-Herzegovina, the strategy declares that the "Commission will start preparing an opinion on Bosnia and Herzegovina's membership application." As regards to Kosovo, the strategy ambiguously states that Kosovo "has an opportunity for sustainable progress through implementation of the Stabilization and Association Agreement and to advance on its European path once objective circumstances allow." It also stresses openly that Kosovo will "benefit considerably from a definitive normalization agreement with Serbia."

The High Representative/Vice President of the Commission Federica Mogherini, together with Enlargement Commissioner Johannes Hahn, presented the annual Enlargement Package in the European Parliament on April 17, 2018 in Strasbourg. They declared the EU Commission's recommendation to the EU Council to open accession negotiations with "the former Yugoslav Republic of Macedonia" and Albania. They described the decision of the Commission as a step forward not only for Macedonia and Albania, but also for the entire "Western Balkans" region.

The EU faces an imminent Brexit. There are reports in the international press that "in Eastern Europe, the E.U. faces a rebellion more threatening than Brexit." It can be said that the EU, as openly revealed by EU Commission President Juncker, is losing influence in the international arena. It thus needs new blood and it is in need of reversing its demographic decline. In such a state of affairs, the EU Commission's preference to push forward the enlargement process towards the "Western Balkans" and its recommendation to start the accession negotiations with the rather underpopulated countries of the region can be considered as a well-advised move. It seems that the Commissions' decision and recommendation for enlargement in the "Western Balkans" is not only a "geostrategic investment for a stable, strong and united Europe," but also a kind of life line support for the vitality of the EU.

This approach of the Commission needs approval by the EU Council. However, in his speech to the EU Parliament on 17 April 2018, President of France Emmanuel Macron ruled out any expansion of the EU until the 28 member countries of the Union undertake serious reforms. He interestingly stressed in his speech that he does not want to see Balkan nations turn towards Turkey or Russia. It is reported in the press that, during his recent visits to Balkan countries, the EU Council President Donald Tusk said that "adding Albania and Macedonia to the bloc's ranks would be tough but worth the effort." In fact, Macron's remarks on EU expansion openly show us that the half-hearted EU enlargement in Balkans will most probably have a tough and rather unpromising future.Macron also owes an explanation to the Turkish public on why he does not want to see Balkan countries turn toward Turkey. Considering that European media outlets and EU officials have so far failed to explain why Turkey's engagement with the other Balkan countries is harmful (Turkey's engagement is in fact beneficial), Macron must explain why he has chosen to unfairly target Turkey in his speech.