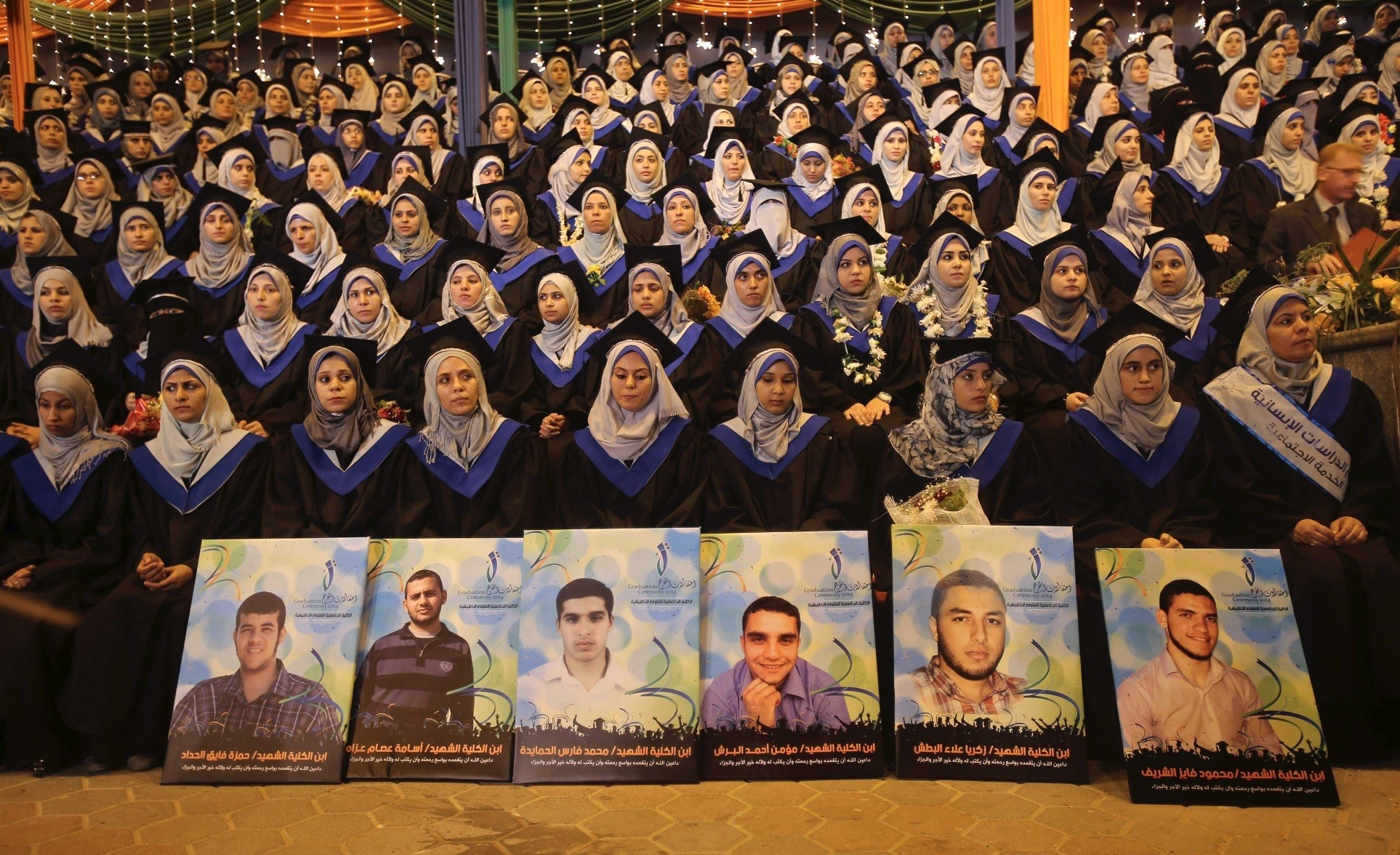 Palestinian graduates attend their graduation ceremony as they sit behind posters of the students who were killed by Israeli forces in a seven-week offensive, at the University College of Applied Sciences, Sept. 10, 2014.
by Fadi Zatari Jun 11, 2018 12:00 am

Israeli academic institutions, universities, as well as research centers are undeniably active participants in advocating, empowering and supporting Israeli's colonization project and emboldening the apartheid system in the Palestinian territories. Considering that Israel is one of the largest manufacturers of weapons in the world, Israeli academia plays a major role in designing and developing Israel's military industry. Israeli academia further justifies Israeli's aggression as well as crimes and human rights violations against the Palestinians under occupation, including the Israeli army's involvement in testing and experimenting its weaponry on Palestinian civilians. In the last decade, thousands of Palestinian children and elderly people have been killed, while thousands more have been severely injured, maimed and intentionally targeted by Israeli soldiers to cause severe disabilities.

The interconnectedness in Israel between academia, the army and the intelligence services is clear. For instance, the National Security Studies Center at the University of Haifa offers Graduate Studies in National Security and Strategic Studies, which has educated hundreds of high ranking and senior officers in the so-called Israeli Defense Forces (IDF). Prominent Israeli academics have been working in the Israeli army or in the Intelligence Service. For example, the Chairman of the Board of Governors at the University of Haifa, Ami Ayalon, was the former head of the Shin Bet (i.e. Israel's secret service). Likewise, the Board of Governors of Hebrew University in Jerusalem, Carmi Gillon, was also the former head of the Shin Bet. Additionally, former Israeli soldiers receive special privileges to study at Israeli universities, including academic scholarships, particularly if they served in combat units.

As a settler, apartheid and manifestly racist state, Israel does not allow Palestinian's from the West Bank and Gaza Strip to study or work in Israeli academia. This supports the argument that Israeli academics, without any exception, are discriminating against all Palestinians from the occupied territories. During my study at Birzeit

University, a leading educational institution and intellectual hub for Palestinians in the West Bank, many of the university's students were detained and the university was even closed several times by the Israeli military. The targeting of Palestinian universities, research institutions and even schools by the occupying force is not a new phenomenon. For instance, the Israeli military closed several Palestinian schools, facilities and universities, considering them "illegal." The University of Birzeit was one of them, which was closed in January 1988 for 51 months consecutively. Israel has a long history of restricting Palestinian rights to access education.

Moreover, Israeli academic institutions and universities discriminate not only against Palestinians but also against any individual who advocates for Palestinian civil and human rights and freedoms. In his superb autobiography, "Out of the Frame: The Struggle for Academic Freedom in Israel," Israeli historian and Professor Ilan Pappe draws an exceptional image of how corrupt and racist Israeli academia is. He was not only called a "traitor" and "agent of Hezbollah," but he also received death threats for supporting the Palestinian struggle in reclaiming their rights.

By advocating and writing in support of the justice of the Palestinians, Pappe paid a heavy personal price. He was excluded by his own university (University of Haifa) and community. He was also discriminated against in Israeli academia for his political stands that challenge Zionism's narrative. In the above-mentioned autobiography, he expounds on his journey of "divorce with the Zionist movement," leaving Israel and Israeli academia and eventually becoming a promoter of the Boycott, Divestment, Sanctions (BDS) movement. Professor Pappe explained his experiences in Israeli academia maintaining:

"I decided to look for a safer academic haven abroad. It became urgent after direct death threats arrived at our home. Letters covered in excrement were put into our mailbox, which means that the senders knew our house, and one persistent telephone caller indicated that he knew the movements of my wife and children and threatened to kill them."

The Palestinian Campaign for the Academic and Cultural Boycott of Israel (PACBI) was established in Ramallah 2004. It is part of the BDS movement and advocates for boycotting Israeli academic and cultural institutions for their continued unethical involvement in violating Palestinians human rights and maintaining the Israeli Apartheid regime. The aim of PACBI is to isolate Israeli academia to force it to change its unethical policy and actions toward the Palestinians.

Boycotting Israeli academia has different aspects, such as refusing to get involved, individually and collectively, in any event, symposium, conference or academic activity, organized or sponsored by Israel, the Israeli lobby or any institutions, which serve the objectives of Israeli propaganda. It also calls for international students to boycott studying at Israeli universities, since Israeli programs at these universities are designed to whitewash the racist nature of the apartheid regime and occupation of the Palestinians territories, as well as to give foreign students a "positive image" about Israel. PACBI also advocates the boycotting of talks, debates, and speeches by any Israeli state official or official representatives of Israeli academia.

As an ethical solution for the unethical role played by Israeli academia in contributing to the violation of Palestinian human rights, sanctioning of, or being silent on, the disproportionate use of force by the Israeli military, which has resulted in the killing and maiming of civilians and facilitating for the experimentation of prohibited weapons in the Gaza Strip for instance, boycotting Israeli academia focuses on raising the complicity of those who aid and abet in the framing of "collective blindness." It empowers those who have been disenfranchised and subjected to violence and dehumanization, to organize and force a change where there are gross human rights violations. It puts pressure on Israel from outside and increases the costs of a continued belligerent occupation of Palestine. Only when actual individuals are affected by being boycotted will this trigger some measure of response from within Israel. By boycotting Israeli academia, this campaign is intended to isolate Israel and restrict further Israeli violence against the Palestinians or their right to access education and to be free.

In essence, boycotting Israeli academia is a non-violent social justice tool. It is a protest against Israeli academia's involvement in research and the development of Israeli weaponry, as well as the unethical and violent responses employed by the state in violation of Palestinian rights to access education. Finally, participating in the boycott campaign is a form of solidarity with the oppressed and occupied Palestinians who are enduring systemic Israeli racism and discrimination in every aspect of their lives. Therefore, boycotting Israeli academia is an ethical responsibility of every academic, scholar and intellectual who stands for justice and peace. It must be understood that academic freedom as a value is not separate from the political context of its exercise. Such a position should become the highest moral and ethical imperative for any conscientious individual.