Trump-Kim agreement: A diplomatic success or a public spectacle? 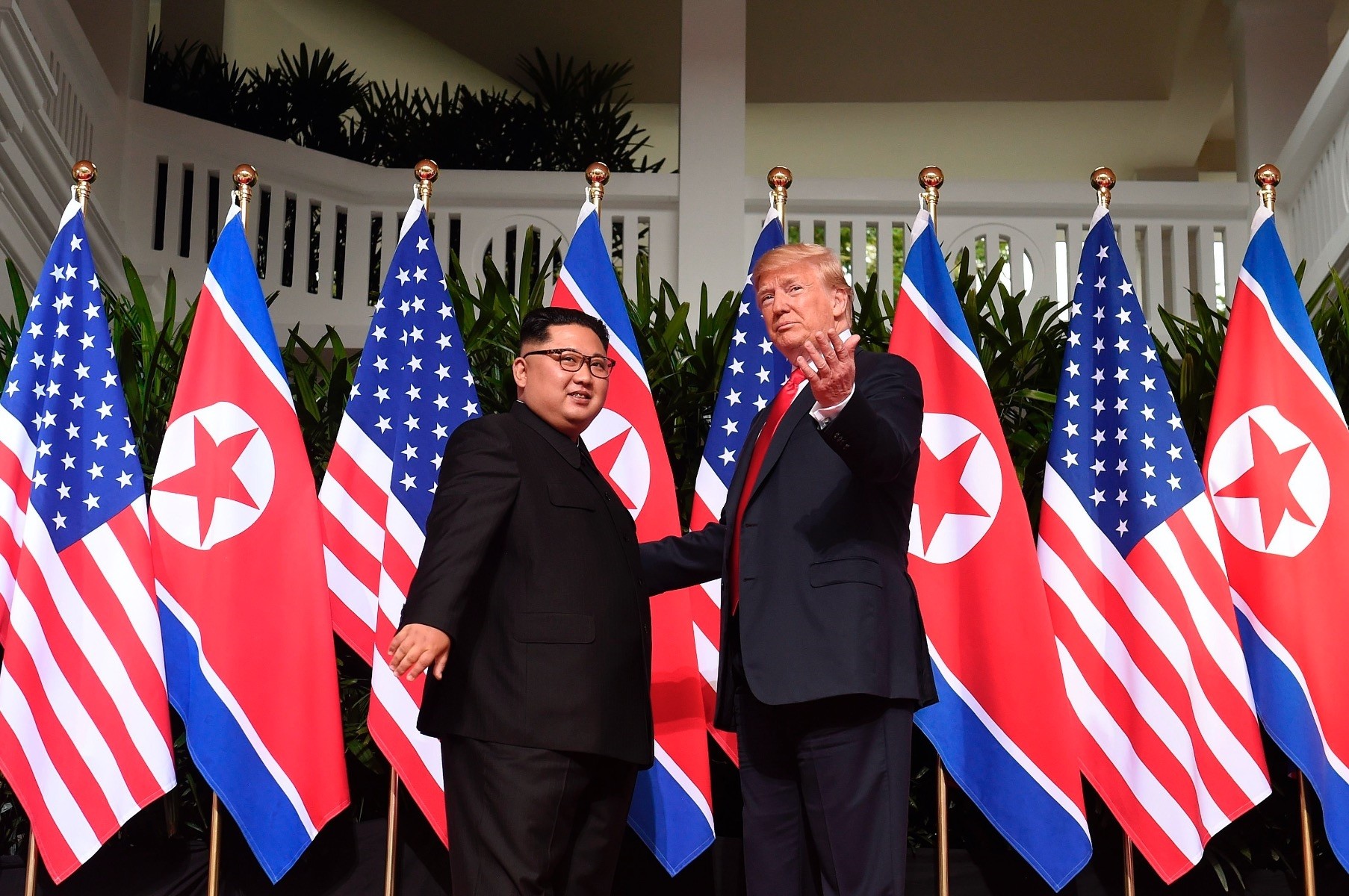 President Trump gestures as he meets with North Korea's Kim Jong Un at the start of their historic summit, Singapore, June 12.
by Talha Köse Jun 15, 2018 12:00 am

U.S. President Donald Trump and Democratic People's Republic of Korea (DPRK) Leader Kim Jong Un's historic summit on Sentosa Island, Singapore ended with the signing of a document and joint statement from the two leaders. The two agreed to work on complete denuclearization and joining their efforts to build lasting and stable peace on the Korean Peninsula. The agreement was considered a remarkable success for some analysts whereas there is a broad skepticism about the possible achievements of the deal for many. The Korean peninsula came to the brink of nuclear confrontation last year. In comparison to last year's exchange of bitter statements between the two leaders, constructive language with the hope of a complete normalization of relations between the two countries is a significant diplomatic achievement. Whether the agreement will bring success to achieve its goals or not, the two leaders' handshake was a dramatic PR spectacle.

Some people compared the deal with the famous Reagan-Gorbachev Summit of the 1980's. The American side promised to stop joint war games with South Korea and Japan and reduce its military presence in the Korean Peninsula. The DPRK will stop nuclear and ballistic missile tests and schedule the process of complete denuclearization. Economic sanctions against the DPRK will continue, but no further sanctions will be issued. It is expected that the sanctions will gradually be reduced as the two sides build more trust. It is unlikely that Pyongyang will give up its nuclear program. The DPRK's nuclear capacity and know-how will stay for a long time, however, no further investment will be made in this area.

President Trump already gained what he wanted from the agreement with Kim. Trump thinks that he is the greatest deal maker of all time and he believes he can succeed in his way if he is given enough space and autonomy. In comparison to the earlier multilateral agreements that the U.S. had withdrawn during Trump presidency the ongoing negotiations with the DPRK has a different logic which makes it a more promising case. The U.S. withdrew from the Paris Climate Agreement, the Iran Nuclear Deal, the Trans-Pacific Partnership and after the latest G-7 Summit, which was held in Charlevoix, Quebec signaled further withdrawal of multilateral agreements.

The Trump-Kim agreement has both promising dimensions as well as serious risks. Risks include the personal aspect of the deal. Personalities and the ties between the leaders were too much on the table in the last year and a half, in both escalations of the relations as well as in the agreement. Whether a leadership change in both countries or the change of mind among the leaders may allow for the continuation of the deal is a complete mystery. Trump considers norms and institutions as obstacles to his "unique negotiation skills." We still do not know whether Kim is a predictable diplomatic negotiation partner. Both Japan and South Korea have some skepticism about the deal between the two leaders; they are primarily concerned about Kim's unpredictable moves. Building trust between the actors that have had very hostiles relations for decades will take a longer time.

The promising side of the Trump-Kim summit is the overall logic of the agreement. The agreement aims to change the dynamics of relations between the two countries fundamentally. The agreement seeks to improve the hostile nature of relationships and expects to get rid of obstacles in this direction. The DPRK's nuclear weapons capacity and plutonium enrichment capabilities are obstacles for long-term trust building. Technical details of de-nuclearization were not discussed in detail in the agreement. It was more of a memorandum of understanding rather than a wholly negotiated technical text. The two countries, along with South Korea, Japan, China and Russia still have a lot to discuss until the sustainable deal is reached between the parties.

In Comparison to the Joint Comprehensive Plan of Action (JCPOA), or the Iranian nuclear deal, the Kim-Trump Agreement has an entirely different logic. Technical dimensions of the verification systems and sanctions were discussed in detail in the JCPOA, whereas the agreement did not aim to change Iran's relations with the West and its regional counterparts in a positive direction. The deal was based on the assumption that the parties will cheat. No trust building and relationship building efforts were designed in the medium term to normalize Iran's relations with the international community. Because of this Iran's ambitions of regional expansionism soared after the signing of the JCPOA. Negotiations with the DPRK emphasized the normalization of relations and trust building first and postponed the other technical details. The Trump-Kim agreement can be considered as a significant diplomatic deal, but it is too early to judge whether it will turn into a diplomatic success. Both skeptics and supporters have enough reasons to confirm their positions.