Turkey's fifth republic and the 2018 elections 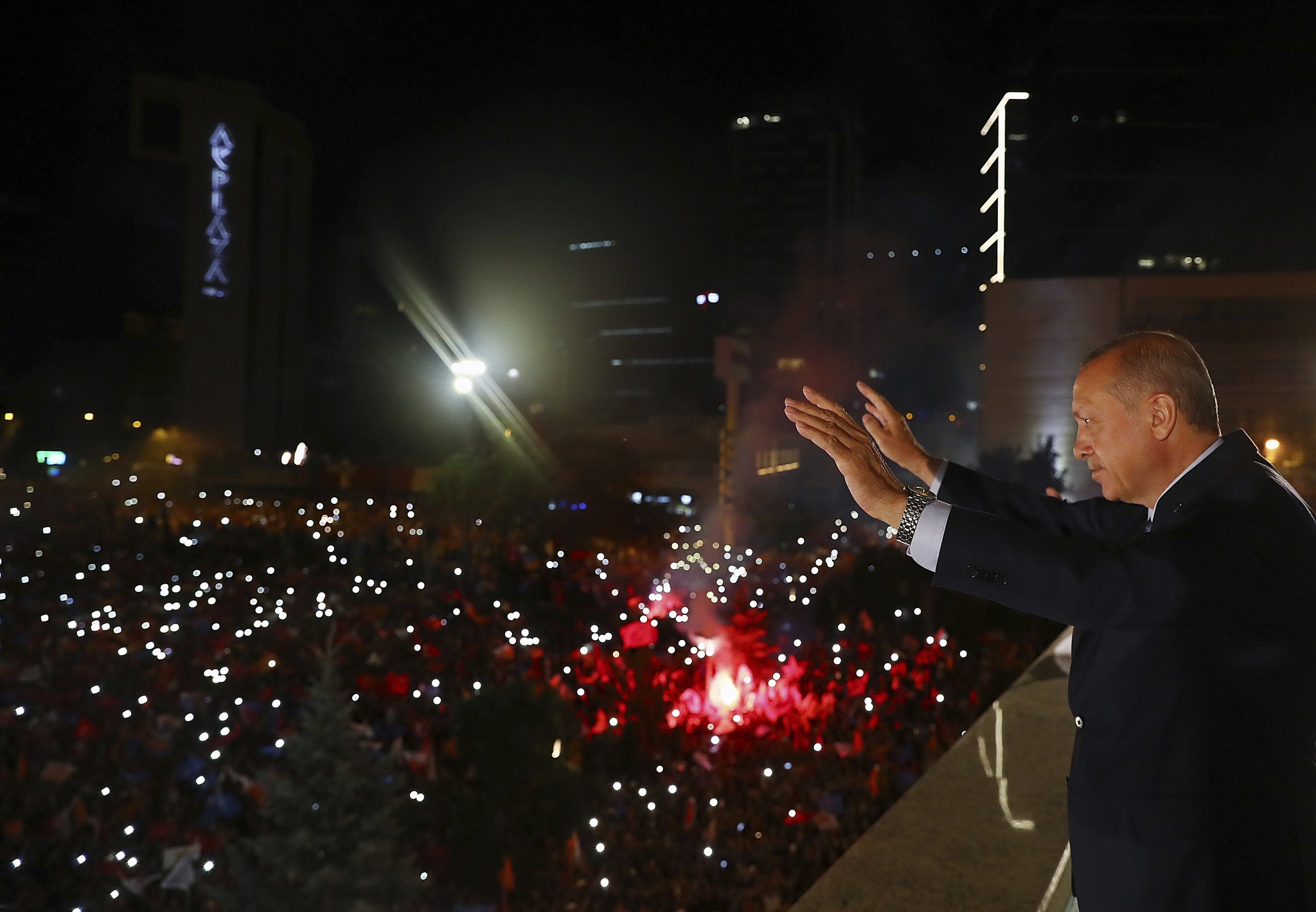 President Erdou011fan waves to supporters celebrating his and the AK Party's victory in Sunday's elections, Ankara, early Monday.
by Şener Aktürk Jun 27, 2018 12:00 am

The June 24 parliamentary and presidential elections marked a historic turning point in Turkey's political development. Constitutional amendments that were popularly approved in the referendum of April 16, 2017 came into effect with the conclusion of these elections. A number of observations about this latest electoral cycle might provide an empirical baseline for situating present-day Turkey in a comparative historical perspective.

Turkey went through yet another round of fiercely contested and very competitive elections, where the outcome was uncertain until the very end, and the presidential candidate and the electoral alliance that won the parliamentary elections both succeeded with a rather narrow margin of 2-3 percent. The uncertainty of elections is the core a competitive multiparty democracy; therefore, it is nice to see such a high level of uncertainty regarding electoral outcomes in Turkey. For example, Russia, which is often unfairly compared to Turkey in this regard, has not witnessed such a competitive presidential election for the last 18 years since Vladimir Putin's election as president in March 2000.

Turnout was very high at around 86 percent, an indication of the high enthusiasm of Turkish citizens regarding their basic democratic right and duty. Equally important, the eight political parties that received approximately 99 percent of the votes will be represented in the new Parliament, making it one of the most representative in Turkish history. Only two political parties, the Free Cause Party (HÜDA-PAR) and Patriotic Party (VP), which together garnered about 0.5 percent of the vote, along with independent candidates, failed to gain representation in Parliament. In a stark contrast, only the Justice and Development Party (AK Party) and the Republican People's Party (CHP) gained seats in Parliament in the 2002 elections, when all other parties, which together received 45 percent of the vote, failed to get any.

The 2018 elections contributed to the transformation of Turkey's party system. The shift to a presidential system coupled with the legal changes that made electoral alliances possible pressured some political parties into two electoral alliances: The People's Alliance joined by the AK Party, the Nationalist Movement Party (MHP), the Great Union Party (BBP) and implicitly including the HÜDA-PAR, and the Nation's Alliance created by the CHP, the Good Party (İP), the Felicity Party (SP) and implicitly including the Peoples' Democratic Party (HDP).

CHP presidential candidate Muharrem İnce received 30.6 percent of the vote in the presidential race, which is far more than the 22.6 percent that his party received in the parliamentary elections; thus, confirming his status as the most popular politician in the main opposition party despite repeatedly being denied the party's chairmanship.

The Turkish political party system has always had bipolar tendencies dating back at least to the 1950s, if not to the 1920s or the 1910s. This bipolarity has been reintroduced under different party labels for decades. Using the names of the two main parties that dominated the 1950s, the first decade of multiparty politics, I will refer to these two poles as "Republicans" (the CHP and its allies) and the "Democrats" (the AK Party and its allies). These descriptions also parallel the parties' present-day ideologies with the governing AK Party explicitly claiming to be the descendant of the Democrat Party (DP) of the 1950s and the main opposition party as the legal and organizational heir to the CHP dating back to the 1920s, preserving its exact name and logo, among other key symbols of party's identity. Cast in these terms, in the current "Democratic" electoral alliance received around 53 percent, whereas the "Republican" alliance received around 45 percent – a rather competitive balance. The formation of two electoral alliances before the elections also increased "accountability" for the voters. In the former electoral system, voters had much less control or prior knowledge about party coalitions.

Kurdish votes were split between the AK Party and the HDP, a rather long-term pattern that is often ignored by Western media. İP candidate Meral Akşener, hailed by some in foreign and Turkish media as the most powerful rival for Erdoğan, only received 7.3 percent of the vote, far below Erdoğan's 52.6 percent and İnce's 30.6 percent.

This was also an election about the future of Syrians, both in Turkey and in Syria. Despite their ideological differences, the opposition parties were united in their promises for reconciliation with the Bashar Assad regime in Syria; whereas the AK Party and the MHP both supported Turkey's current policy of supporting the Syrian opposition led by the Free Syrian Army (FSA) and seeking the removal of Assad as an illegitimate leader. Turkey is hosting 4 million Syrian refugees, the highest number in the world, and yet the anti-refugee rhetoric employed by İnce and Akşener did not earn them an electoral majority.

The most substantial criticism regarding the electoral process was the continuation of the state of emergency and unequal access to the mainstream mass media. Multiple presidential candidates promised the removal of the state of emergency, which would provide a major boost for democratic development. Opposition candidates particularly criticized state-owned public broadcaster TRT for providing limited coverage of their campaigns. On the other hand, prime-time interviews and commercials of opposition candidates, including İnce, Akşener and even SP candidate Temal Karamollaoğlu – who received 1 percent of the vote, appeared in four of the top five Turkish television stations – all of which are privately-owned – providing them with considerable but not equal visibility during the election cycle.

Following the convention of labeling different political historical periods after different constitutions, one could describe the current phase as Turkey's "fifth republic." The first republic was that of Turkey's original Parliament and its Constitution from 1920-1924, with which the Ankara government waged the National Struggle. The second republic began in 1924 with a new Constitution and a Parliament primarily shaped by the founding leader of modern Turkey, Mustafa Kemal Atatürk, which remained in effect until 1960. The third republic from 1960-1983 and the fourth republic from 1983-2017 both began with military coups when new Constitutions were drafted under military dictatorships. The fourth republic went into crisis with the 2007 presidential elections, where the CHP-led opposition denied Parliament's right to elect a president, which triggered the AK Party to submit a constitutional amendment requiring the popular election of the president. The amendment was approved in a popular referendum in 2007 and came into effect with the first popular presidential election in 2014. The constitutional referendum of April 2017 transformed the popularly elected president into the chief executive, which will now come into effect for the first time following the simultaneous presidential and parliamentary elections of June 24, ushering in Turkey's fifth republic in earnest.