Is there a legal gap in defining cultural value? Let's look at late historian Sezgin's case in Frankfurt 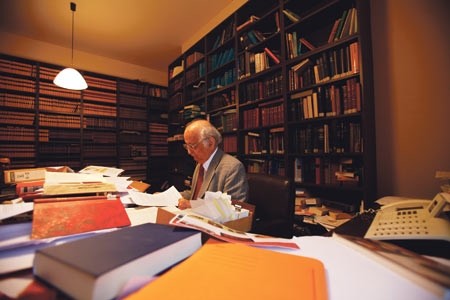 Late Turkish historian Fuat Sezgin was accused by Germany of attempting to smuggle a large book collection in the Goethe Institute u2013 that actually belonged to him.
by Ferhat Küçük
Jul 18, 2018 12:00 am

The investigation launched by German authorities against late Turkish historian Fuat Sezgin is completely political rather than legal, stemming from the deepening political rift between Ankara and Berlin

Fuat Sezgin, the world-famous Turkish historian of Islamic science, passed away at the age of 94 last month. Thousands of people, including President Recep Tayyip Erdoğan, ministers, academics and intellectuals from around the world were at his funeral in Istanbul's Fatih district. According to his will, Sezgin was buried in the historical Gülhane Park where his Museum of Islamic Science and Technology History is located. He is commemorated with deep sorrow and respect at the same time.

How could the late academic Sezgin leave such a lasting legacy for all of us, and what makes him a great scholar? Besides his gentle, hardworking and inspiring way of living, the most accurate answer is for certain the masterpieces and sources he left behind.

Spending most of his time – 17 hours a day – working on the history of Islamic science, Sezgin visited almost all the libraries and archives in over sixty countries, particularly in Europe and the Middle East, and unearthed a total of 1,300 hardcover sources on the field.

In his youth, Sezgin was determined to discover the sources of Islamic science and learned how to bind a book from a Syrian bookbinder so he can save damaged sources for the future on his own. Sezgin produced volumes of works at the Institute of the History of the Arab Islamic Sciences at Johann Wolfgang Goethe University in Frankfurt, where he served as the founder and director until his final days.

Some of his pieces include "Astronomy, Geography and navigations in Islamic civilization," "Islamic Medicine," "Science and Technology in Islam," "Piri Reis and the pre-Columbian Discovery of the American continent by Muslim Seafarers," and so on.

Sezgin published almost all of his research in German, one of the reasons the German language today is defined and used as the source language of this field.

However, since May 2017, Sezgin's name was mentioned in some unfortunate news stories. According to reports, the German Attorney General started proceedings against Sezgin, accusing him of embezzling German cultural assets "according to the requirements of the law on the protection of cultural heritage – Gesetz zum Schutz von Kulturgut in German."

Naturally, the public witnessed the prosecution news stories with shock, for Sezgin was as gentle as a dove and only cared and focused on his research; he often did not even leave the library for days. The attorney general announced the accusation as "committing to move the large book collection belonging to the [Goethe] Institute to Turkey by embezzling them."

With only a basic understanding of the law, it was not that hard to see that the investigation document was completely political rather than legal, as the political rift between Ankara and Berlin was gradually deepening. To give a short example, Sezgin was defined in the prosecution documents as "a close friend of Erdoğan…" showing how biased and politically motivated the whole prosecution launched against him really was.

Following the start of the prosecution, the German authorities in the Ministry of Science realized that the scientific library in question couldn't be described as a national property except for a few pieces of art such as paintings by Albrecht Dürer and Lucas Cranach; the Frankfurt Attorney General accordingly had to close the investigation.

Yet, the question of who is the real owner of the books in question is still trying to be answered by the German Attorney General. As a result, the Frankfurt Administrative Court (Verwaltungsgericht) prohibited Sezgin's 15,000 books to be transported from Germany and expanded the accusations against him and sealed his research room in the institute.

Sezgin, then 94, wanted to maintain his scientific research and complete the 18th part of his entire corpus on Arabic Literature, but the German Ministry of Science also announced that Sezgin wouldn't be allowed to use his manuscripts and notes. Sezgin recounted the situation in the following way, "All of my research books are in that room, I can't enter in it."Sezgin was a researcher who spent all of his money, no matter what the cost, to reach any kind of piece, article, map, book or material belonging to the history of Islamic science. His publications, used as the primary sources by researchers around the world, were released in the "Arabic-Islamic Sciences Magazine" (Geschichte des Arabischen Schrifttums). The hardcover sources, also regarded as a great bibliography, are today a great factual, global resource. 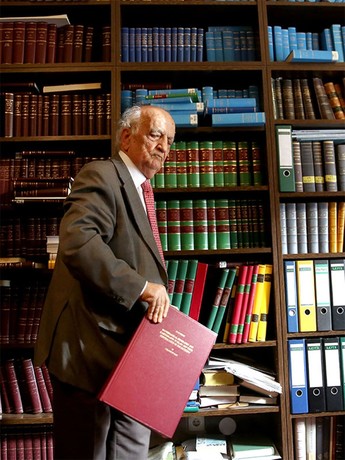 There was a general feeling of indifference towards the field of Islamic science in Germany, which was once the European country that most welcomed and encouraged all academics to contribute in the history of Islamic science within its institutes and universities.

Sezgin, who had moved to Frankfurt because of the German university providing great opportunities for him to work on this field, naturally disliked the rising trend of prohibitions, e.g. the closure of some related faculties, and the growing indifference to his field. As a person who devoted his life to contributing to this field, Sezgin was very saddened by this situation.

In parallel, a foundation on Islamic science, namely the "Fuat Sezgin Research Foundation for the History of Science in Islam," was founded in Istanbul's Gülhane Park, thanks to the efforts of then-Prime Minister Erdoğan. It was a great source of happiness for Sezgin. The museum still exhibits more than 700 works, the majority of which are samples of the inventions and discoveries of Muslim scholars throughout history.

So, who is the real owner of the books?

The discussion around the ownership of the books started with Sezgin's decision to transfer them to the library of the Islamic Institute in Istanbul founded by the Turkish government. The transportation of the nearly 40,000 books personally owned by Sezgin himself was prohibited at the German airport.

In addition, the story has gradually deepened and is ongoing. To further its case against him, the related Germany authorities discharged him from his post as the director of the institute, but they did not abolish the institute since it was funded by Kuwait.

There is a debate about who is the owner of the books. International law does not define cultural property but rather leaves what is covered by the term to be domestically defined by the countries involved, according to their own laws. However, which types of cultural heritage should be protected is defined in the agreement on the International Protection of Cultural and Natural Heritage, but the precise definition of cultural property is not made in any of such legal documents.

According to the first sub-article of the sixth article of the related German law (Gesetz zum Schutz von Kulturgut/2016), the term "National Cultural Property" contains books included in a national list containing cultural value, defined as public property and included in a public institution, registered and included in a public institution that protects cultural heritage whose expenditures are provided by a state or defined as a part of a cultural collection of a state or a province.

While none of Sezgin's books fall under the scope of the legal definitions above, the German state still tries to hamper efforts to transfer the books to Turkey. Although Sezgin stated insistently many times that the books are his personal property and not the property of the institute or university, the German state claims that "Sezgin's research may span more than 100 years," and thus they did not allow the books to be taken out of their country as part of the Law of the Protection Cultural Property. Although not even one single book is included in the list of national cultural properties, some special conditions may be taken into consideration. The German Ministry of Science tries to base its claims and investigation on the sixth article of the law, namely items "registered and included in a public institution whose expenditures are provided by a state that protects cultural heritage." According to the ministry, this article requires Sezgin to leave the books to the Goethe Institute, since the Hessen province owns it.

On the contrary, Sezgin's books in the institute are not a "culture collection," but are for research. Moreover, as it can be understood from the title of the related legal article, describing a piece as having "cultural value" requires it to also be "national" at the same time. In other words, the piece concerned needs to be about German history or similar subjects.

In addition, Sezgin's books could be freely used for research in Germany and not belong to a German artist or academic. The purpose of the institute, which is accepted as a research foundation by German law, is defined in the registry book as "researching and learning the Arabic-Islamic cultural history of science" and its capital was/is provided by Kuwait and other Arab countries – not Germany.

However, Sezgin meticulously labeled all of the books that he bought, copied or saved since 1980. He used yellow labels are for books bought with the money of the institute, while the books with white labels were bought with his own money. In his personal library, the number of white-labeled books is approximately 40,000 in total, while the yellow-labeled books amount to about 15,000. The books being held in the Frankfurt airport belong to Sezgin's own personal library – i.e. the white-labeled books.

Despite this apparent fact, the German Ministry of Science still insists – illegally – on creating difficulties for sending these books to Turkey, simply because of the ongoing crisis between the two states. Who cares about the law? It seems that Berlin currently does not.