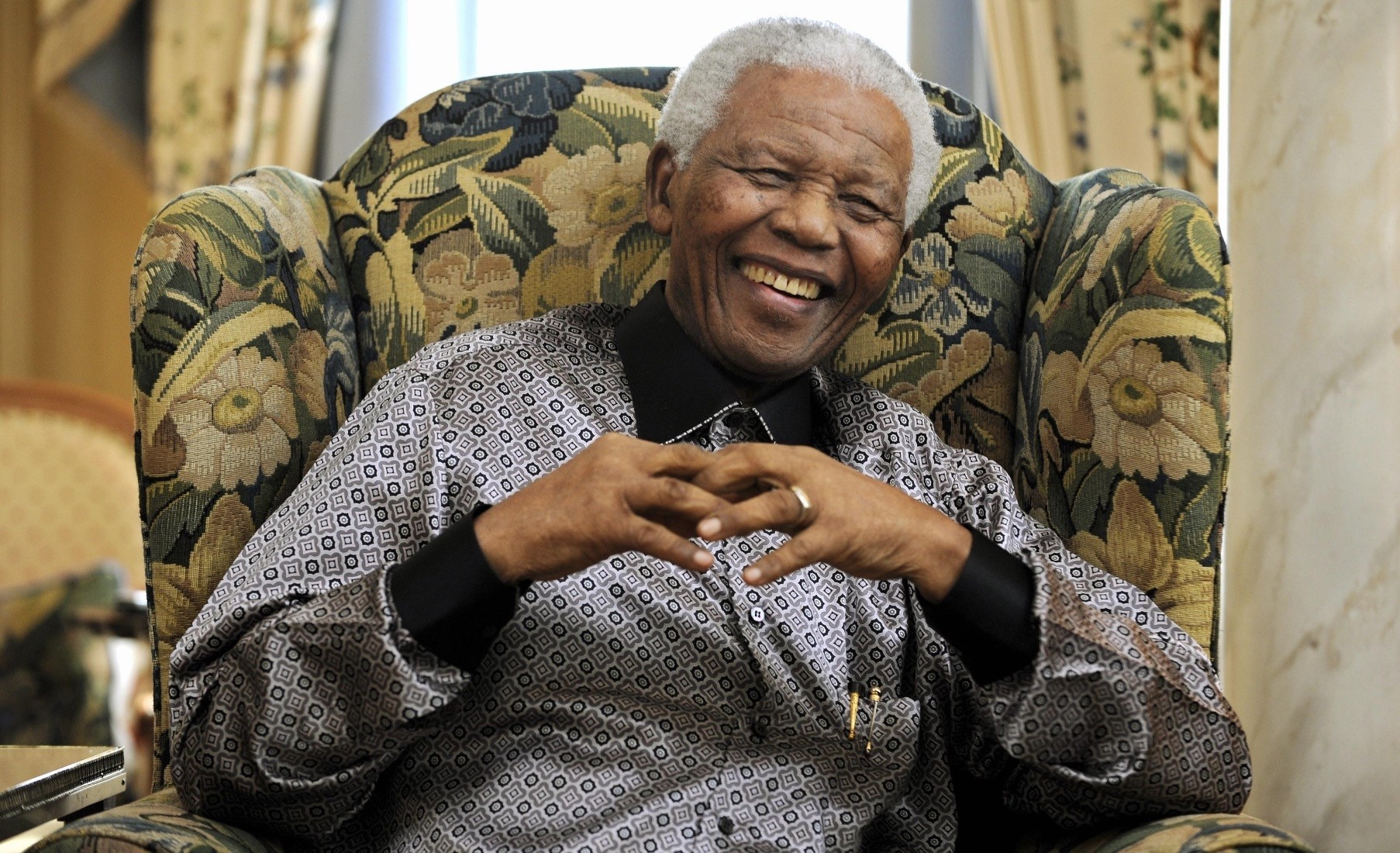 Nelson Mandela, the late president of South Africa and social justice campaigner, was commemorated around the world yesterday; many well-wishers expressed deep sorrow but also respect for his inspiring life story and legacy.
by Mushtak Parker
Jul 19, 2018 12:00 am

Mandela, the first democratically elected president of a non-racial South Africa, is still respected all over the world as a symbol of the struggle against apartheid and white minority rule, and against all forms of racism

Millions of South Africans and people all over the world commemorated the centennial of the birth of Nelson Rolihlahla Mandela, one of the true icons and statesmen of the 20th century, on July 18.

Mandela, the first democratically elected president of a non-racial South Africa, became known and respected all over the world as a symbol of the struggle against apartheid and white minority rule, and against all forms of racism. To many, he was a living legend and the hero of African liberation from colonialism.

The centennial could not have come at a more crucial time for the Rainbow Nation, Mandela's pet name for the racial melting pot that is South Africa, in its 24-year post-apartheid era, as it faces entrenched political, economic, financial, developmental and transformative challenges.

The statistics and life experiences of the majority of black and other non-white populations of South Africa confirm that despite the fact that the country has made impressive strides in various fields since the African National Congress (ANC), led by Mandela who came to power in elections in 1994 and five years after his death in 2013, they rue the lack of integration between the various races. The lack of land reforms; the continued economic domination of whites and the emerging black establishment; the elite capture of vast sections of the economy; the entrenched corruption of the political elites; the failure of successive ANC governments to deliver on jobs, affordable housing, black empowerment, protection of women against violence and rising inequality between the haves and have-nots, all of which would have been anathema to Madiba, the endearing nickname by which Mandela was widely known.

The ruling ANC government headed by President Cyril Ramaphosa, faced with a general election in 2019 and a black electorate increasingly disillusioned by the failure of the ANC to deliver on its promises after two and a half decades in power, is capitalizing on the birth centennial of one of its famous sons, stressing that "we need to stay true and recommit to Madiba's ideals, including his unwavering commitment to justice, equality and a non-racial South Africa."

Mandela eloquently espoused his political philosophy in his "Statement from the Dock" at the infamous Rivonia Trial, the show trial that he and his ANC comrades were subjected to in the Pretoria Supreme Court on April 20, 1964: "During my lifetime, I have dedicated myself to this struggle of the African people. I have fought against white domination, and I have fought against black domination. I have cherished the ideal of a democratic and free society in which all persons live together in harmony and with equal opportunities. It is an ideal, which I hope to live for and to achieve. But if need be, it is an ideal for which I am prepared to die."

Who would have thought that the mischievous little boy born in the village of Mvezo in Transkei in the Eastern Cape and who grew up in the Thembu royal house would go on to become one of the iconic international peacemakers and statesmen of the 20th century and a living legend wooed by royalty, politicians and celebrities, and by millions of ordinary people as a symbol of hope for liberation from their oppression, the direness of their poverty and the indecency of the inequality that has ravaged modern society.Mandela was incarcerated for 26 long years with several comrades for the struggle against apartheid on the infamous Robben Island prison off the coast of Cape Town. He won the heart of the world and symbolized the triumph of the human spirit when following his release from Pollsmoor Prison on Feb. 11, 1990. With his subsequent election as the president of South Africa in 1994, he humbly chose the path of reconciliation and restitution instead of revenge.

The underlying and recurring theme in Mandela's philosophical DNA remains the power of forgiveness, which he exuded by disarming even his most die-hard of detractors through the generosity of his spirit and deportment, firmly rejecting any notion of a Maoist "cult of personality" or even sainthood, preferring to be a sinner who was trying to do something good. "What counts in life," he once said, "is not the mere fact that we have lived. It is what difference we have made to the lives of others that will determine the significance of the life we lead."

Yet, reality suggests that as good a statesman Mandela was, especially in reconciling a post-apartheid South Africa, as a politician his acumen sometimes deserted him either because of inexperience, the politically motivated counsel of his advisers or simply by the inability of the ANC to fast-track its transformation from a liberation movement into a ruling political party. Mandela made some crucial errors both in domestic and foreign policy. His "open border" policy led to an influx of economic migrants, which exacerbated the country's dire male adult unemployment rate. The ANC's own investment arm, Thebe Investment Corporation, and its flagship black empowerment entity, Future Bank, suffered spectacular bankruptcies.

On social issues, Mandela's legacy permeates through three failed policies: The ill-thought out attempt to introduce Muslim personal law to appease local Muslim groups; the drastic dumbing down of the state education system and the quality of education; and the failure to come up with a credible policy on HIV/AIDS, especially in the light of the death of one of Mandela's own sons from AIDS and South Africa having one of the highest incidences of the disease in the world.

In foreign policy, Mandela achieved greater success, especially as a role model for Africa and other emerging countries. His support for the Palestinians was unflinching, and his persuading Moammar Gadhafi of Libya to abandon his nuclear ambitions paved the way for the lifting of U.N. sanctions.

His biggest foreign policy faux pas was to refuse the Ataturk Award, Turkey's most prestigious state honor, for which he was nominated in 1992 by the coalition government of Süleyman Demirel and Erdal İnönu in recognition of his life-long struggle against apartheid. Mandela's fellow Robben Island inmate, the late Dr. Seddick Isaacs, explained to me years later that in hindsight Mandela regretted refusing the award because he was wrongly advised to reject it in protest of Ankara's alleged human rights violations.Mandela's regret was further manifested after he left office when he sent a message to Ankara that he would be prepared to accept the Atatürk Award should it be offered to him then. By then the damage was done.

The South African Foreign Ministry failed to recognize the historical ties between the cape colony and the Ottoman sultanate, which established diplomatic ties with the cape in the 19th century at the behest of Queen Victoria, who asked the sultan in Istanbul to send an emissary, Abu Bekir Effendi, "to sort out your [Muslim] subjects" who were bickering among themselves.

South Africa under Mandela, however, did set a global standard and a remarkable legacy in truth and reconciliation, which has yet to be successfully replicated in other countries of former conflict and repression.

The South African Truth and Reconciliation Commission was based in part on the Chilean Rettig Commission, created under President Patricio Aylwin Azocar, to investigate abuses under the Pinochet regime. Through the commission, South Africans were given the chance to exorcise the catharsis of living under the inhumanity of apartheid from their psyche. Mandela deftly and largely successfully pushed through an exercise, which no amount of international awards and honors, including the part discredited Nobel Peace Prize, could make up for the sacrifices he and his comrades made in their struggle for dignity and democracy in South Africa.Mandela's choice of Thabo Mbeki as his successor proved to be highly flawed. The haughty Mbeki became the HIV denier of South African politics. His successor Jacob Zuma, perhaps the most disastrous of Mandela's successors, excelled at the state capture of vast chunks of the South African economy for personal gain.

The reality is that both Mbeki and Zuma were eventually ousted by the ANC, and it remains to be seen how many terms President Cyril Ramaphosa will survive, especially with the threat of a divisive new Mining Charter and the policy of Expropriation Without Compensation looming.

The Mandela legacy will endure, but the danger is the building of a "cult of Madiba" and its commercialization. There are already signs of this happening.