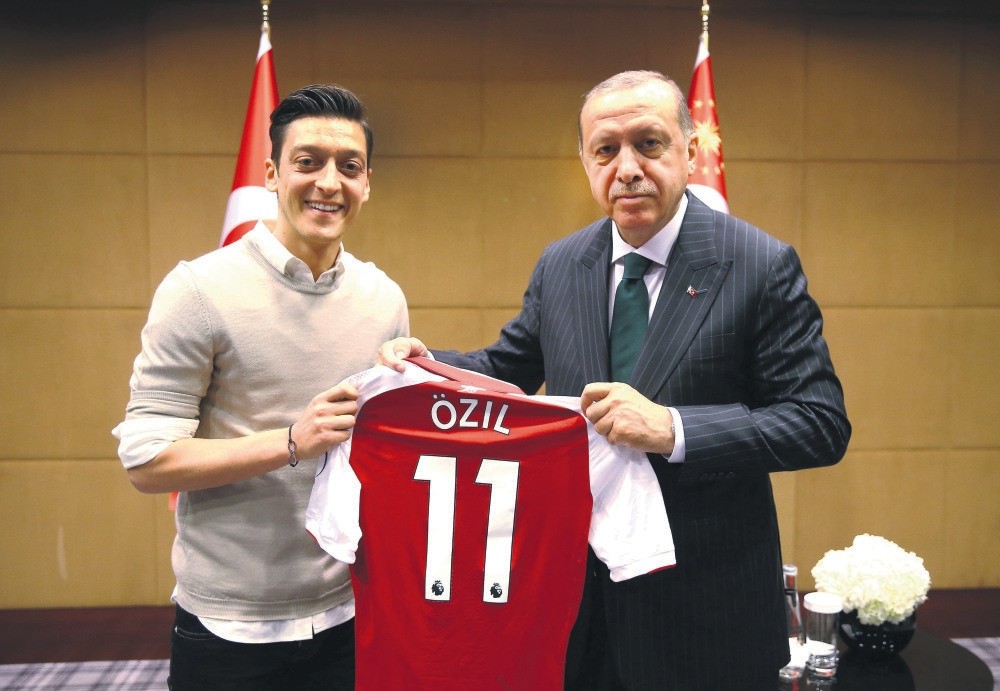 These are disturbingly dark times for football, ethnicity and identity. First the fiasco of the French football team expressing their "African" heritage leading to racist backlash and now the ordeal of Mesut Özil`s resignation from the German team due to racism. In both France and Germany, the fleeting fraternity promoted by football can no longer conceal ever-growing social cleavages.

Özil publically proclaimed that he will never again play for Germany due to a "feeling of racism and disrespect." Özil's ferocious yet focused Twitter tirade presented a laundry list of complaints outlining his ill-treatment by the German media, the German Football Association (Deutscher Fußball-Bund or DFB) and the national squad`s fans after Özil and his co-player, İlkay Gündoğan, took pictures with President Recep Tayyip Erdoğan in May.

Both Özil and Gündoğan had every right to take a picture. Taking a picture with President Erdoğan is not about petty politics, it is about honoring the highest office of his family's Turkish ancestry. Özil is a football player and not a politician. Senior DFB officials disrespecting Özil's roots and using him for pitiful political propaganda is highly unethical.

Özil, by posing with President Erdoğan in a photograph, is exercising his legal freedom of expression. Since when has this become a crime? Moreover, the photo shoot was part of a charitable event. Grindel`s pernicious overreaction to what is, after all, merely a picture, is inexcusable.

Özil's resignation throws fresh flames onto Germany's incendiary political tinderbox, reopening Germany`s debate on immigration and assimilation. Chancellor Angela Merkel is on a razor`s edge for welcoming 1.2 million refugees in 2015, especially by Germany`s toxic anti-immigrant far-right parties like the Alternative for Germany (AfD), Pegida, the National Democratic Party of Germany (NPD) and Hogesa. These parties` unsavory hate speech against Özil was exceeded in venom and vitriol by their gutless armies of social media trolls.

Özil's critique was primarily targeted against the DFB's president, Reinhard Grindel, who used and abused the talented 29-year-old player as a convenient scapegoat to mask his own glaring incompetence. Özil lamented "Grindel calls me German when we win and immigrant when we lose."Özil complained that German media outlets provocatively brought up his dual German and Turkish identity, especially after he came under fire following Germany's inauspicious World Cup exit. Grindel was desperate after the DFB were dealt a media maelstrom following Germany`s lackluster World Cup performance, so he lashed out on Özil.No wonder he no longer wants to don the shirt of a country where those in authority and those who should be supporting him don't accord him the dignity of being treated as an "equal" citizen.

Reinhard Grindel has a thorny past. As a politician in 2004, Grindel spewed that multiculturalism was "a myth and a lifelong lie." It might be inappropriate for him to shoulder the responsibility of supervising players and coaches from richly diverse ethnic, racial and religious backgrounds.

Every sportsperson should be judged on merit and performance rather than bigoted prejudice. The responsibility for explanation and a full apology to Özil now resides with Grindel.

Now is precisely the time for all Germans who represent an "open society" to show solidarity with Özil and peacefully protest against Grindel. Özil's unfair discrimination is repugnant. FIFA should launch a formal inquiry into this scandal and take decisive decisions and sanctions as required. A reality remains that a Muslim player of Turkish origin, like Özil, has to endure much fiercer criticism as compared to others in his position. For instance, when Germany player Lothar Mätthaus was recently pictured with President Vladimir Putin, there was no outcry, but a conspicuous pin-drop silence.

The overreaction from authorities and from many (so-called) fans of football to what is just a photo uncovers an ominously xenophobic undercurrent in German football and society.

There is seemingly no way back for Özil but let us hope he'll take Grindel with him. That's the only way to "right" this "wrong."

The bigotry Özil faced is in the media spotlight due to his stature, but millions of dual ancestry Turkish-German citizens and other minorities in Germany are race baited and bullied by skin-head gangs and hooligans, notoriously so in Eastern Germany Saxony, in Duisberg and Köln, which, due to large immigrant populations, are seething cauldrons of social unease.

Many activists in Germany seeking to undermine far-right militancy are deprecated as "Volksverräter" a Nazi term meaning "traitor." The pro-refugee pro-immigrant press is derided as "Lügenpresse" or "lying press."

Germany was blessed with a tumbling Berlin "Wall" in 1989. In 2018, the last thing Germany needs is erecting new "walls" between communities and identities. In an era of Trump, Brexit, and the rise of a far-right, Germany and all Europeans must build "bridges" rather than building "walls."