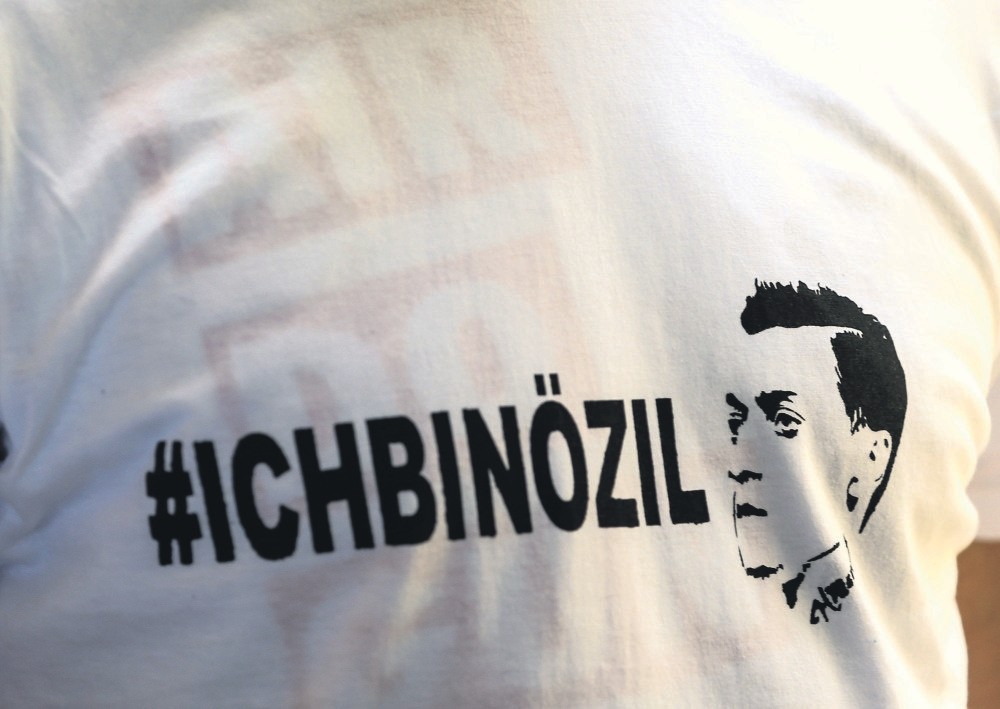 A T-shirt bearing the words ,I am u00d6zil, is worn by a protester during a demonstration against the German government's treatment of international football star Mesut u00d6zil, Germany.
by Markar Esayan Aug 03, 2018 12:00 am

Everything began when Mesut Özil posed for a photo with President Recep Tayyip Erdoğan in Britain. Following the photo that triggered a huge reaction, Germany unexpectedly failed to qualify in the group stage of the World Cup. Cem Özdemir, former co-chair of Germany's Green Party, uttered these stunning words on a program on the German ZDF channel:

"Erdoğan is responsible for Germany's elimination. They [Özil and İlkay Gündoğan] took photos with Erdoğan, and this decreased the morale of the players. That's why they could not play well."

In fact, his statement alone was basically a confession that revealed the seriousness of the situation. Why would German internationals of Turkish descent taking pictures with an elected, legitimate political leader bring down the morale of German players? What if such a claim did not stem only from Özdemir's Erdoğan phobia but was, in fact, true?If the German team was actually eliminated due to the negative impact of that photo, we are facing a very serious situation indeed. What kind of feelings and thoughts did these players have about Turkey and Erdoğan? How were they so negatively affected that they failed in the World Cup? Or was it actually because Özil's teammates were dismayed by the racist attacks against him? The last question seems to be the most plausible and humane.

I would hate to believe that it could be true, but is it not problematic enough that a veteran politician and the former co-chair of a party that receives substantial vote in Germany said these words on a mainstream channel like the ZDF and that it was considered normal? But if, as stated above, Özdemir was right, there would be a much more serious situation in Germany.

Whatever the truth, however, Özil was virtually lynched because of the photo and decided to quit the national team in protest of the German Football Federation's stance. His in his poignant farewell message he said, "I am German when we win, but I am an immigrant when we lose."

Mutlu Özil, Mesut's brother and manager, made the following statement:

"We made this decision together. He thought much about the issue. He has served the national team for 12 years. There have been some unfortunate events recently. We have discussed what is best for him and made our decision of him quitting the national team. Racism has always existed and will exist in Germany, but our family has not experienced it much. There are good Germans and bad Germans. Racism was always there. It has been on the rise recently and discussed more openly. Of course, there are also very good people among Germans; those who like and support Mesut. They send mails, express their support and beg him not to quit the team. There are also some who exhibit racism. We are not disappointed. We live in Germany, but we are Turks. We have two roots. Mesut does not deserve all this. They should not have done this because of a single photo. Mesut would not want to leave after 12 years of service. Everyone wants to leave decently by playing a last match. Mesut could have left under better conditions. We did not want it to end this way, but they have done this on purpose. I will tell Mesut about what's happening here when I see him. I'm sure he also follows the supportive statements. Surely, he knows that Turkey is united behind him. Last night, our president called me and boosted our morale. That is, in itself, enough for us."

Support for Mesut from Turkey is normal and expected. Many German politicians have also expressed support for Mesut. But what has been done cannot be undone. A young and talented player had to quit the national team because of his faith and nationality. This should be of serious concern for Germany.

But how did such a negative atmosphere emerge? If only we could say this is an isolated incident, but it is not. Germany and Europe have a serious racism problem. The Özil incident was extensively covered by the media because he is famous, but there are many such racist incidents that go overlooked.

That the attacks targeted Turkey has not gone unnoticed either. We witnessed the abuse thrown at Turkey and Erdoğan for the populist discourse during the election processes in Germany and Europe. Turkey's ministers were not allowed to hold meetings in Europe. A female minister was kept in her car and even escorted out of the country. European Turks were attacked by police dogs and detained. This happened where militants from the PKK, the Gülenist Terror Group (FETÖ) and the Revolutionary People's Liberation Party-Front (DHKP-C) freely spread propaganda against Turkey and even threaten Turkish citizens.

In the German and European press, subjective news on Turkey and the wave of hatred toward Erdoğan has reached unbearable levels. Portrayed with a Hitler mustache, Erdoğan was discredited as a dictator and Turkey was pictured as a barbarian country dragged back into the dark ages. In a country with millions of Turks, Germany is not only exposing citizens of Turkish descent, but also other Muslim Germans to racism. It is hard to understand why the German government does not take a meaningful approach against such attitudes that would endanger domestic peace and seriously damage democracy. Occasional trouble between countries can be short-lived or extend for a longer period. However, both Germany and Turkey should know that mutual relations must normalize. Indeed, the relations appear to have weathered their worst period, and normalization with the Netherlands too seems to be back on track.

On the other hand, irresponsible perception operations deeply affect public opinion, and they are not to be mended by governmental decisions. People believe claims are real, and they do change their attitude. They even put pressure on their governments.

In other words, no one wins that game. Turkey would like to have and maintain good relations with every country, but when this becomes impossible, it also knows how to defend itself. Now, what about ordinary people? How will they guard their lives and honor? How can the damage done to democracy be fixed? How will resilient injuries of populism, which was used as leverage in elections, be mended?

The Özil incident has shown that populism feeds racism and takes a toll. Is this not a sign that centrist politics are suffering in Germany and Europe? Why are extremist right and racist movements shifting to the center? If centrist politicians do not take strong and bold steps to solve this problem, if they submit to the easiness of populism, this is what we will encounter.

Moreover, centrist parties will not be able to take on the championing of extremist right's discourse and promises; the extreme right will take over the race and be the winner of this "wild run," similar to Adolf Hitler's rise.

The fundamental problem is Europe's approach to "others." Pretense or smoothing over the cracks will not do. World War I saw changes in borders, but people generally stayed put. In World War II, it was the people that shifted. Europe saw a chance to get rid of minorities. The continent has not fully come to terms with both wars, and the past has been faced only superficially, oblivion being the true motive.

Now, this is what haunts Europe today. Europe is not open to outsiders. It is not only afraid of them, but also despises them. Therefore, even though Turkey received 3.5 million refugees, the EU would have almost disintegrated if Turkey had not signed a readmission agreement. Just because Turkey's government does not suit their lifestyle and mentality, they declared Erdoğan a dictator. However, Turkey is Europe's chance to open up to the world and become a global power that overcomes Eurocentrism. Actually, it should be Turkey hesitating to be part of the EU, but it is really inexplicable that Europe should apply double standards toward a secular, democratic Turkey with a bright future.

So, Özil, Erdoğan and Turkey are not the cause, they are the outcome. The real question is how infected Europe is with the viruses of racism and isolationism.