How recent is anti-Muslim racism? 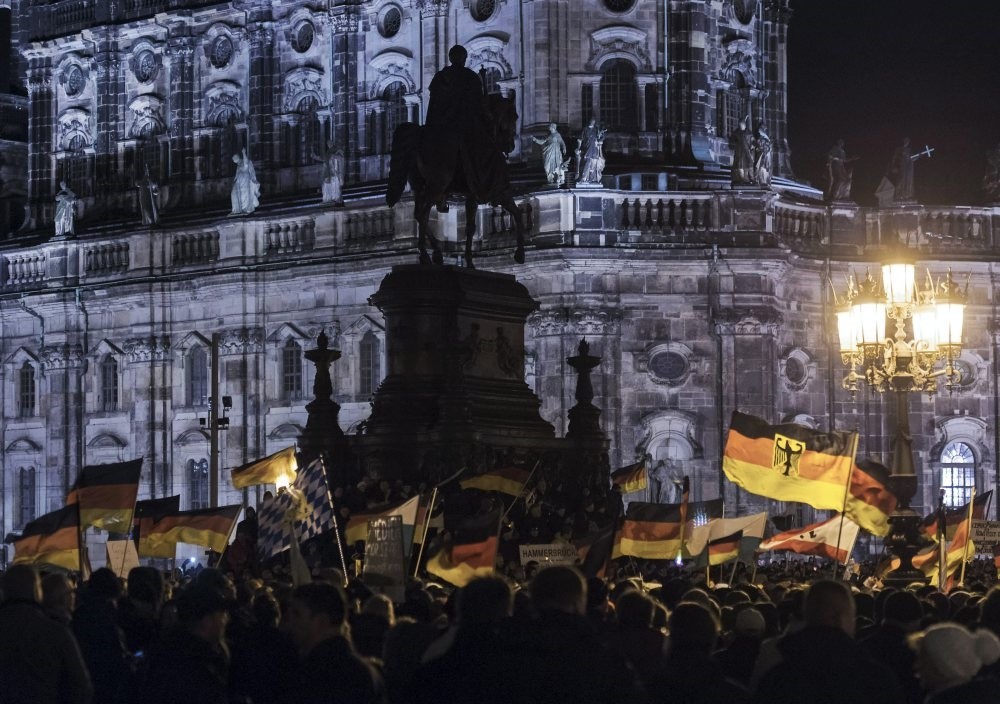 Far-right protesters holding German flags participate in a rally against Islam, in front of the bronze equestrian statue of King John of Saxony, Dresden, Dec. 22, 2014.
by Elif Köroğlu Aug 10, 2018 12:00 am

The statement "Islam does not belong to Germany" by Horst Seehofer, the German politician of the Christian Social Union in Bavaria, is equivalent to the statement "Muslims do not belong to Germany." The de-individualization of Muslims does not change the discrimination and othering of them. As the term anti-Semitism was needed to highlight the growing danger of anti-Jewish hostility in the past, the mere use of Islamophobia will not describe the discrimination and danger Muslims in Western societies are faced with.

An analysis of recent empirical studies proves that there is a preponderance of a fanatic, irrational and unprogressive Islam in Germany. The common cultural, political, geographical, philosophical, theological basis of Judaism, Christianity and Islam is being denied, while construing devotedly the dichotomy between the two unequal parties. There is a continuous line from the Crusades of medieval times through the Ottoman Empire and European colonialism to the anti-Muslim racism of nowadays. The argumentation strategy of the bigoted dichotomy towards Islam and Muslims, disposed in the Crusades holds on through the centuries and explains the anti-Muslim racism of nowadays.

Back in 1453, when Constantinople was conquered by the Ottoman Turks, Cardinal Bessarion summarized the situation to the Doge of Venice as follows: "A city which was once so flourishing has been captured, despoiled, ravaged and completely sacked by the most inhuman barbarians." Another historical example of the antagonism and de-humanization of Muslims happened in 1920, when the French army entered Damascus, their commander marched to Saladin's tomb and declared: "No revoilà, Saladin! – Here we are again!"

This was the beginning of a new era, when Pope Urban II urged his audience to undertake a "just war" against Muslims. Analyzing these quotes, we can assert how this mindset was used to legitimize the colonization of most Muslim countries by European powers.

This is why Fred Halliday, criticizing the term Islamophobia and speaking of anti-Muslim racism, determines "Islam as religion, was the enemy in the past: in the crusades or the Reconquista. It is not the enemy now… The attack now is against not Islam as a faith but Muslims especially immigrants who might be covered by the term. The enemy is not faith or a culture, but a people."

A rating of racism and discrimination based on ethnic background or religion is as complex as the phenomenon of discrimination itself. Nevertheless, there are qualitative and quantitative analyses which prove the discrimination of the Muslim minority in Germany. "Muslims are often victims of negative stereotyping, at times reinforced through negative or selective reporting in the media. In addition, they are vulnerable to manifestations of prejudice and hatred in the form of anything from verbal threats through to physical attacks on people and property," states a 2006 report of the European Monitoring Center on Racism and Xenophobia (EUMC).

The empirical researches show that the disadvantaged position of people with a Muslim background in Germany is not explainable with human capital-related factors, such as qualification, language ability et cetera. Anti-Muslim racism means a rational and intentional group-focused enmity, which appears in the disaffirmation of Islam and Muslims and in the dichotomous construction of "we" and the "others" emphasizing the ideology of disparity and the higher valence of the dominating culture.

According to David J. Finlay, Ole R. Holsti and Richard R. Fagen in their book "Enemies in Politics," this aspect shows the connection between the enemy image and the significance of ideology "in groups with an overriding ideological orientation, enemies are an integral part of the organizations' immediate and long-range problems of group solidarity and fulfillment of plans."

Enemy images embrace similar to prejudices cognitive, affective and connotative components and whereas generalizations, categorizations and stereotypes can be disproved, enemy images are characterized by their stability. There is a distorted reality concerning the structures of perception and cognition as well as an intended enhancement of the enemy images through political propaganda.

The analysis of historical incidences shows that numerous territorial conquering expeditions were legitimatized with consciously constructed enemy images. That way, problems concerning inner security were antagonized with the help of systematic propaganda, suggesting a potential danger to the public caused by certain social groups. Based on this potential danger, a preventive war against the enemy is being enforced, although the enemy does not exist in reality.

Furthermore, enemy images have a system-stabilizing function, since the collective rejection of the enemy serves the cohesiveness of social groups. Having a mutual enemy – regardless of national or ideological nature – helps the stabilization of the national self-esteem to be achieved, whereas the acceptance of the status quo, the political leadership and the political system grows.

Also, with the help of an enemy image, domestic conflicts are being trivialized: "Pointing to an enemy, is one way to distract the attention of the public from major problems. Thus, problems within a country, like unemployment or pollution are viewed as less important."

Thus, this phenomenon is defined by Stuart Hall as racism without races and describes racism as a social construction, in order to categorize social groups and to create a hierarchy between them. The anti-Muslim racism works with the essentialization of cultural differences, which suggests a static, homogeneous and foreign Islam, while Muslims are being de-individualized and reduced to the assumed image of the religion. That is why Muslims and individuals marked as Muslims are asked to admit human rights or distance themselves from fundamentalism. The dichotomy between the European identity and the Muslims has provoked social movements such as PEGIDA, "Patriotic Europeans against the Islamisation of the West" in Germany and later the right wing political party Alternative for Germany (AfD). There are a lot of examples of how anti-Muslim racism is reflecting itself in Germany: Violent attacks and targeted killing, arson and damaging of mosques (37 attacks in 2018 in Germany), discrimination against Muslims in schools, universities, workplaces et cetera, disrespect and defamation toward Muslims, Anti-Muslim-Test in Germany for the naturalization, defamation of the religion itself, presenting Islam as dangerous, threatening and fundamentalist and so on.

This process of othering is a racialization of Islam and Muslim culture, where the religion is replaced by race in order to classify people. While the authors of the Runnymede Reports (1997) define Islamophobia as an unfounded hostility towards Islam, the recent analyses show that we need to be more precise. The authors state that it refers to the practical consequences of such hostility in unfair discrimination against Muslim individuals and communities, and to the exclusion of Muslims from mainstream political and social affairs.