Rise of institutional Islamophobia in the West 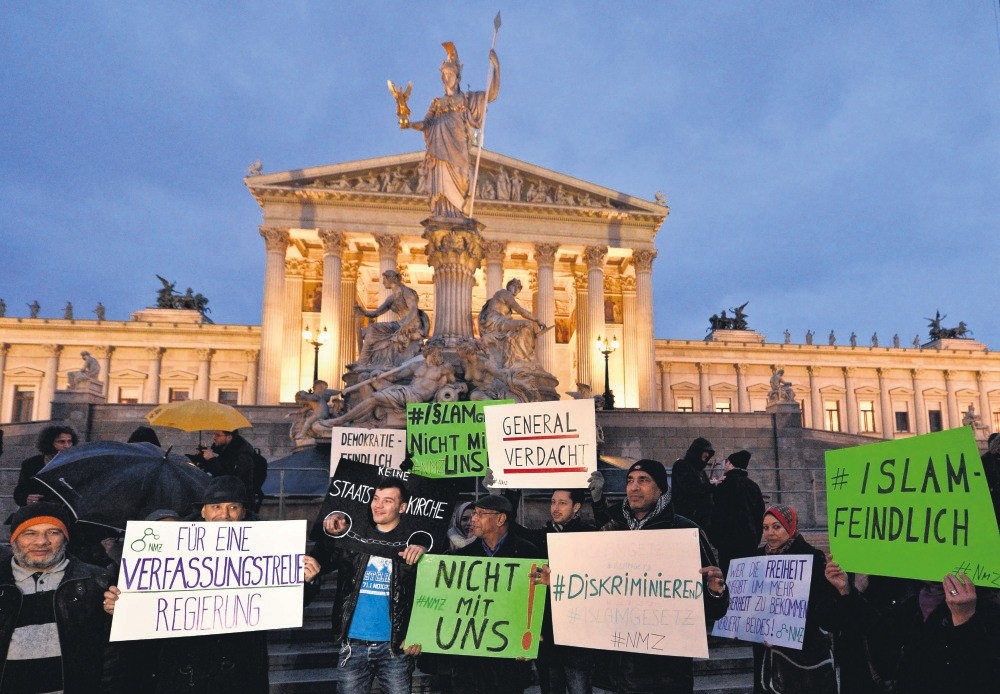 Protesters hold banners during a demonstration organized under the slogan ,New Islam Law? Not with us!, in front of the parliament building in Vienna, Austria, Feb. 24, 2015.
by Mushtak Parker Aug 16, 2018 12:00 am

The rise of populist politics and parties in recent years in Western democracies and in Russia, Eastern Europe and even in enclaves such as Philippines and India, perhaps not coincidentally has been in tandem with the rise of neo-fascism, anti-Semitism, Islamophobia, patriarchy infused with misogyny and racism in general. This has also coincided with waves of migration from emerging countries in Africa, Asia, Latin America and Eastern Europe, where refugees, economic migrants or asylum seekers are fleeing poverty, corruption and hopelessness in their own societies.

The politics of a country reflects the character of its people; however, that is an oft-quoted adage fraught with oversimplification. In reality, the rise of extreme-right parties is not new, whether in Europe or elsewhere, for the underlying causalities and the liberal democratic process is complex and fraught with shifting dynamics.

There is no doubt that the neo-fascists in Europe, Anglo-Saxon countries and in other places where whites are the majority have been emboldened by the electoral successes or progress of far-right parties. In fact, 2017 was a good year for Europe's far-right and extreme nationalists, who are strong in central Europe, especially in Austria.

While other counterparts, such as the Alternative for Germany (AfD), Geert Wilders's Freedom Party (PVV) in the Netherlands and Marine Le Pen's National Front (FN) in France, have had limited success largely because they have been ostracized and exposed for what they are by the centrist political consensus, Austria's Freedom Party (FPÖ) is the only one to have translated electoral gains in the October general election last year into real power.

It entered a coalition government with the conservative People's Party (ÖVP), led by Austrian Chancellor Sebastian Kurz, but although it is the junior partner in the coalition government, the FPÖ has secured control of ministries including interior, foreign and defense.

When democratic centrist parties, whether on the right or left, start cooperating with anti-democratic extremists then, by its very rationale and contradictions, there are no cheers for democracy. In Italy the anti-establishment Five Star Movement and the Far Right anti-immigrant Northern League formed the government after months of haggling, each finding an unlikely but expedient common ground in deportations and lifting the poor out of poverty.

Could these be a beginning of a dangerous slippery slope that could only lead to disaster for a European continent that is the only one in contemporary history to have started and endured two so-called "world wars" in the last century? In truth, they were essentially European tribal wars pitting the Anglo Saxon British, the German Teutons and the Soviets against each other, and dragging the rest of the world into the conflict whether they liked it or not.

History bears witness that the convenient scapegoat turned out to be European Jews who, over the previous centuries, were subject to brutal anti-Semitism resulting in the Holocaust during World War II in which millions of Jews, gypsies, communists and others perished.

In 2018 Europe, it seems to be the turn of Muslims. Europe seems to be oblivious about the similarities and the danger of history sleepwalking into repeating itself. This may be an exaggeration, but perhaps in the Europe of the 1930s such a moral dereliction too was prevalent, because politicians were too obsessed with the narrow self-interest of their parties and their pockets.

It was over two centuries ago that the Anglo-Irish statesman and philosopher, Edmund Burke wrote: "The only thing necessary for the triumph of evil is for good men to do nothing."

Democratic politicians should not shy away from calling a spade a spade. Austrian Vice-Chancellor Heinz Christian Strache, leader of the Freedom Party, is a neo-fascist, and Chancellor Kurz ignores this at his own peril. The extreme right like the communists and other nondemocratic groups, including Jewish, Buddhist, Hindu and Muslim fascists, use the democratic process for expediency.

Those who believe that the closure of mosques, expulsion of imams, the banning of hijabs for girls, cutting benefits for migrants and refugees, seizing the phones of asylum seekers and so on by the current Austrian government is merely to do with arresting the onslaught of so-called "political Islam" are deluded.

Fascism, like a leopard, is incapable of changing its spots. The current state of electoral politics in Western democracies at the height of populism, shifting sands of economic well-being of citizens, growing inequality of the haves and have-nots, change in global sovereign capital ownership from the West to China, Japan and the Gulf states of Saudi Arabia and Abu Dhabi, and the diametrically and ideologically opposed but expedient "alliances" between democratic parties and extremists, which ought to be anathema, has seen fascism and political chauvinism finding its niche. This is not confined to the West but in several other societies.

How entrenched and how enduring its shelf life becomes, only time will tell. The challenge for politicians is to redefine liberal democracy, which puts the interests of citizens above those of the corporate world and the cornucopia of interest groups.

Austria has failed to exorcise the specter of neo-fascism from its psyche and society following the passing of the Denazification Laws in 1946, in the aftermath of the collapse of the Third Reich and the defeat of Nazism and Germany. Remember, Austria was the only country to form an Anschluss (union) with Germany after it acknowledged itself "a German state" in 1936, paving the way for Adolf Hitler to incorporate it into Germany.

The problem is that Europe in the aftermath of World War II has been faced with a spate of democratic deficits in almost every aspect of society. In general, this has been highlighted by poor political leadership – with a few exceptions; short-termism in policies fueled by a notion that "we've never had it so good" in perpetuity; an inability to come to terms with the loss of the empire; a chauvinism in domestic, foreign and economic matters partly based on racism; and governance incompetence which has served to marginalize huge sections of their own populations.

European democrats have displayed a breath-taking policy and moral ambivalence when it comes to the Muslim world. Take Turkey's EU membership negotiations. It is no secret that the Austrian government wants Brussels to break off negotiations. Perhaps they got their cue from seasoned politicians of yesteryear, such as former German Chancellor Helmut Schmidt who in the past said out loud what many other European leaders dare not say in public – that Europe is a "Christian club" and effectively is not compatible with Islam and that there is no room for hordes of Muslims from Turkey.

I have no track with extremists, especially violent ones, of any kind, whether it is neo-Nazis, evangelicals, Jewish settler groups, Hindu and Buddhist chauvinists, die-hard African nationalists and so-called jihadists. I fully understand and support the right of a democratic government to restrict and control immigration, to fight terrorism and to safeguard the economic prosperity of all its stakeholders.

It is the rule of law and not political or racial prejudice that defines a democracy. European democracy is at a crossroad clouded by a motley assortment of factors such as the failure of mainstream politics and democratic capitalism, the rise of populism, the encroachment of extremism, gratuitous scapegoating of religious and ethnic minorities, and poor leadership. The tragedy is that none of these are new. Whether history repeats itself, only time will tell. Turks may have a legitimate retort: "Not at our expense!"