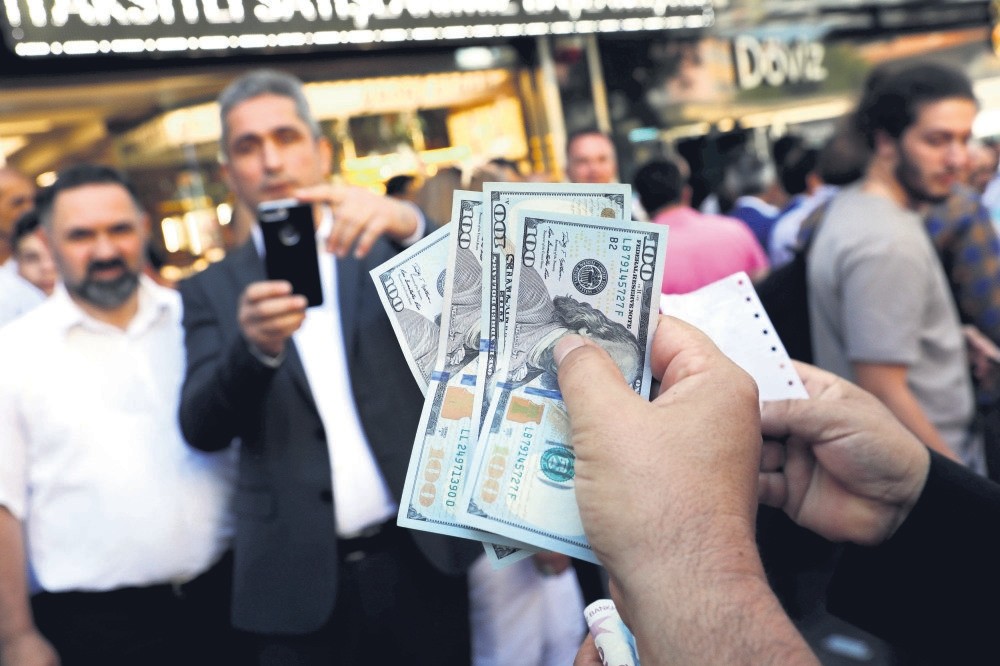 A businessman holding U.S. dollars poses for his friend in front of a currency exchange office in response to President Erdou011fan's call on Turks to sell their dollar savings to support the Turkish lira, Ankara, Aug.14.
by Markar Esayan Aug 17, 2018 12:00 am

The already tense relations between Turkey and the U.S. hit a new low over the detention and trial of pastor Andrew Brunson. In a recent speech, U.S. Vice President Mike Pence demanded that Turkey, in a rather threatening tone, free Brunson and soon after, the U.S. imposed sanctions on two Turkish ministers. After waiting for the decision to be reversed to no avail, Turkey launched similar sanctions on two U.S. officials in retaliation. Meanwhile, a delegation from the Foreign Ministry went to the U.S. to resolve the crisis. We learned, however, that the meeting saw no results, mostly because the U.S. set a firm deadline for the release of Brunson, a move President Recep Tayyip Erdoğan personally addressed in statements soon after. This type of move makes negotiations impossible. The executive branch in Turkey cannot interfere with the judiciary because it is another independent body in the government.

Moreover, one cannot help but remember that Fetullah Gülen, the mastermind behind the July 15 coup attempt, and his henchmen have not been extradited by the U.S. to Turkey despite being sent boxes of evidence that they were involved in the failed coup. Treating Turkey like a banana republic is not appropriate. In the meantime, the U.S. insists on harboring an organization – the Gülenist Terror Group (FETÖ) – that continues to commit crimes in Turkey through its crypto elements and then has the audacity to preach to Turkish delegations about the "independence of the judiciary and judicial processes in the U.S."

Yet, the issue goes beyond that. Foreign exchange rates in Turkey are soaring contrary to economic indicators, suggesting manipulation, with U.S. President Donald Trump doubling the tariffs on Turkish steel and aluminum. His follow-up tweet was ugly, emphasizing "the strong dollar and the sliding lira."

At the time, I was reading, by coincidence, an article by renowned European historian Tony Judt titled "Israel without Clichés." The article was published in The New York Times in June 2010 and was posthumously incorporated into his book, "When the Facts Change." Judt was a genuinely objective scholar with unflinching devotion to intellectual ethics, the loss of whom has left us impoverished. So, I appreciate his views.The article was about the Israeli attack on the "Free Gaza Flotilla" in international waters, and it also criticized the unconditional U.S. support for Israel. In the last paragraph, Judt wrote the following lines referencing Turkey: "Along with the oil sheikdoms, Israel is now America's greatest strategic liability in the Middle East and Central Asia. Thanks to Israel, we are in serious danger of 'losing' Turkey: A Muslim democracy, offended at its treatment by the European Union that is the pivotal actor in near-Eastern and Central Asian affairs. Without Turkey, the United States will achieve few of its regional objectives – whether in Iran, Afghanistan or the Arab world. The time has come to cut through the clichés surrounding it, treat Israel like a "normal" state and sever the umbilical cord."

When Israel was in question, I think it would be helpful to note that Judt was Jewish.

The emphasis on Israel here is important because of the close connection between this country, which enjoys immunity in U.S. foreign policy, and the U.S.' attitudes toward Turkey, which can be described as hostile at the moment. Turkey had carried out active mediation between the Palestine Liberation Organization (PLO), Hamas and Israel until the operation "Cast Lead" against Gaza, which came as a surprise to Ankara. It had also mediated between Israel and Syria. Indeed, in 2006, Israel's then-foreign minister described bilateral relations as "perfect," while Erdoğan, the prime minister at the time, visited Israel in 2005. There he expressed that he sees anti-Semitism as a crime against humanity. Despite the deterioration of relations, Turkey maintains this principled stance.

Erdoğan believes he was deceived by Israel. Just four days before the operation on Dec. 23, 2008, then-Israeli Prime Minister Ehud Olmert visited Turkey and talked about Syria and Gaza and had a phone conversation with Erdoğan two days later; however, Israel never informed Turkey about the operation and closed the door on diplomacy. During the ensuing three-week operation, 1,300 people were killed. Soon after, in 2009, the famous "one minute" incident took place.

Actually, Turkey assumed in good faith a role the U.S. was supposed to fill, but instead ended up facing threats. Today, regarding the Palestine issue, the Syrian conflict or the natural gas reserves in the eastern Mediterranean, Turkey is being unfairly and clumsily targeted by the U.S. and Israel. During the latest crisis, these have certainly had a much greater effect than the Brunson issue.

So how to evaluate the latest crisis? Is it enough to explain by referencing the Israeli lobby? Definitely not. Turkish-U.S. relations had already begun to deteriorate before the Trump era, during former U.S. President Barack Obama's term. The U.S. just could not understand its NATO ally's valid concerns. But can we explain the issue within the context of Obama and the Turkish-U.S. relations?

Neither Judt nor I think so. The issue is more about the end of the Cold War and the 9/11 attacks. Judt wrote: "The predictable backlash has been a new tone in American policy, an arrogant impatience with foreign opinion of any kind. The Cold War is over, runs the unilateralist creed of the [George W.] Bush administration and its supporters, and the dust has now cleared. We know who we are, and we know what we want. Foreign policy is about national interests. National interests are served by the exercise of power. Power is about arms and the will to use them, and we have both. In the words of the columnist Charles Krauthammer, in June 2001, 'The new unilateralism seeks to strengthen American power and unashamedly deploy it on behalf of self-defined global ends.'" This aggressive, disregarding and arrogant attitude toward Turkey is nothing more than a Trump-style manifestation of that general trend.

Apart from Turkey's importance, such cases undermine the credibility, predictability and prestige of big nations, and especially that of a big power like the U.S. Yes, the Turkish economy has been damaged by the current crisis. Turkey's $77 billion trade deficit is its weak spot. But it is not alone. The U.S. itself runs a nearly $600 billion trade deficit and is among the most indebted countries in the world. As Judt also wrote, if the U.S. had been an Asian or South American country, it would have already fallen into the clutches of the International Monetary Fund (IMF). The U.S. is much more dependent on foreign capital than the others. Joseph Nye, who served as former U.S. President Bill Clinton's intelligence and defense adviser, criticized that in his book "Bound of Lead," in which he analyzed the nature of the changing American power. According to Nye, in today's inextricably complex international relations, relying exclusively on hard power undermines and disables Washington's clout. The U.S.' real power lies in encouraging the world in its quest for democracy, good things and peace. This, Judt says, is a myth. Though it does not stand up anymore, it still prevails. Instead of transforming it from a myth into fact, the U.S. keeps wasting this shattered legacy as well by relying mostly on its hard power.

The U.S.' role in Europe

The U.S. came to Europe's aid after the destruction of fascism and Nazism and helped the old continent make a fresh start, a nice exception in history in my opinion. Europe thrived and ascended within the secure environment of the Cold War. The U.S. may be right in refusing to shoulder this burden anymore. On the other hand, 9/11 was a major trauma.

But the positive role it played following World War II, at least for the sake of Europe, was shed after the Cold War and 9/11. This trend stemmed from countries trying to reduce their reliance on hard power. However, if the U.S. had restored collapsed states, resolved the Palestine issue instead of invading Iraq and Afghanistan after 9/11, allowed international organizations, particularly the U.N., to function well instead of shamefully refusing to join the International Criminal Court, how would the world be today?

Let's assume that the U.S. is an isolated continent not interested in the rest of the world. Is this the way to maintain being a big power or to protect national interests? If it loses the trust of its allies, and if anti-American sentiment spreads from marginal regions to the whole world, what will the ability to deploy troops anywhere in the world within 48 hours provide the U.S.?

After all, Erdoğan stood his ground in an opinion piece for The New York Times: "At a time when evil continues to lurk around the world, unilateral actions against Turkey by the United States, our ally of decades, will only serve to undermine American interests and security. Before it is too late, Washington must give up the misguided notion that our relationship can be asymmetrical and come to terms with the fact that Turkey has alternatives. Failure to reverse this trend of unilateralism and disrespect will require us to start looking for new friends and allies. Unless the United States starts respecting Turkey's sovereignty and proves that it understands the dangers that our nation faces, our partnership could be in jeopardy. Turkey has established time and again that it will take care of its own business if the United States refuses to listen."

Apparently, the president of a country suffering an unjust crisis with the U.S. does not ask for mercy after all. Despite everything, he opens the door for correcting mistakes before it's too late. The U.S. should appreciate this.

However, I won't hold my breath.

If the U.S. relies too much on its hard power, it may see the rest of the world, which it has left embittered and damaged, unite against it much sooner than expected.

I think this will not create a better future for the world. Unless we find better ways to live together and share resources, an insecure future awaits us all.