What's new in Turkey's fluctuating relationship with the EU? 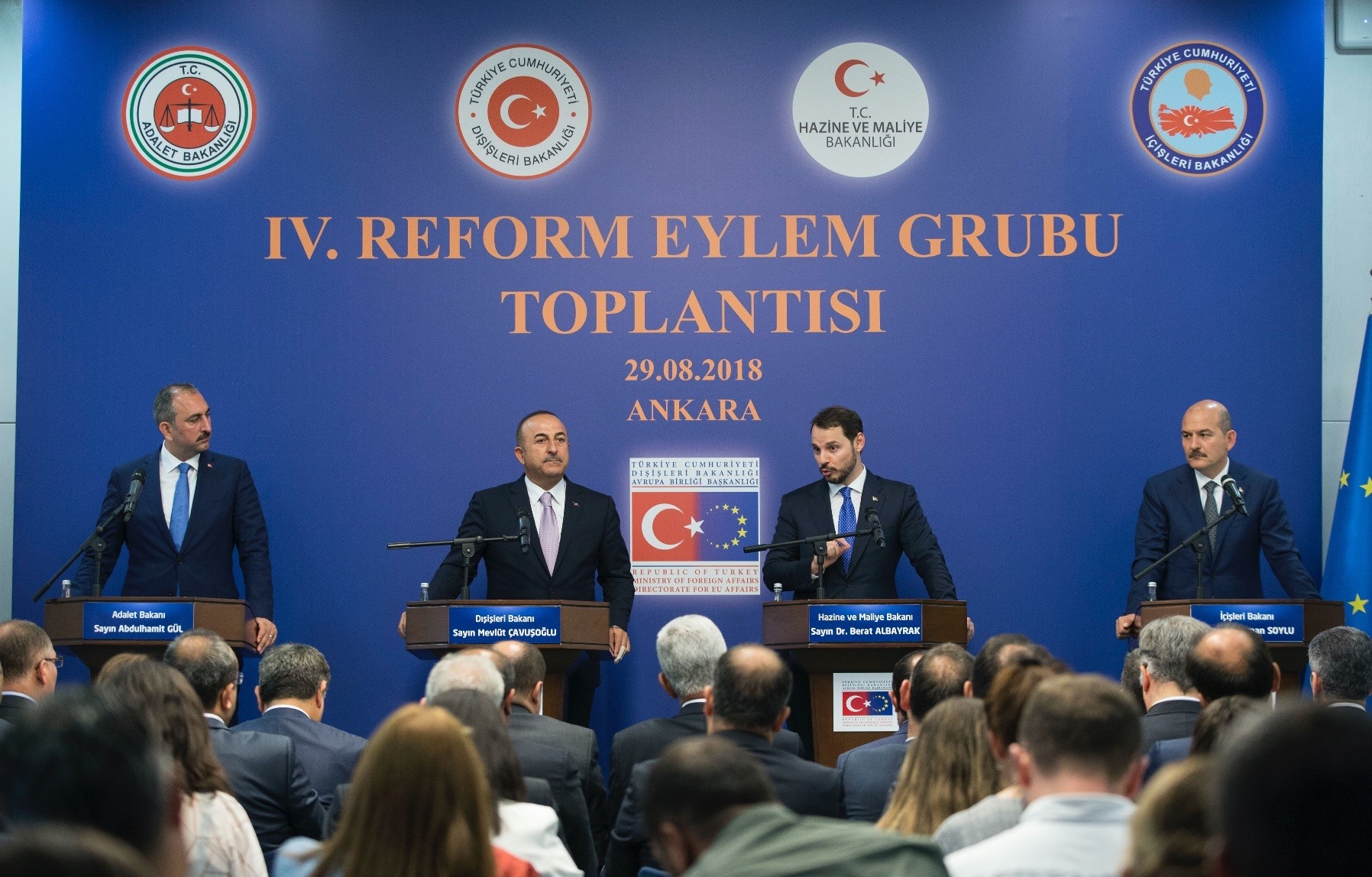 Just recently, Turkey and European Union representatives resumed some significant meetings, called Reform Action, after a three-year break. At the end of the gatherings, four leading Turkish ministers gave a news briefing to the press. One of the ministers said that EU reforms have resurfaced after the global markets attempted to downplay the value of the Turkish lira against the U.S. dollar, which has the potential to affect not only the financial economy of Turkey but also of all the other regional countries. For few years, there has been a huge threat to the existing trading balance, which is likely to cause turbulence in all the markets worldwide. There are also other risky conflicts such as the ongoing proxy wars in the regional countries, the presence of the failed state governments in the region and the humanitarian and refugee crises. They are all continuing to unbalance the social and national security of the region, and particularly of Turkey. Hence, the financial economic stability of Turkey is extremely important for the already volatile region.

Speaking following the meeting, Foreign Minister Mevlüt Çavuşoğlu, accompanied by EU leaders, stated that all parties agreed to speed up the political reform process which includes the enhancement of the existing judicial basic rights, justice, freedom, protection of individual data, security of institutions and individuals. It can be easily said that the close cooperation with the European Council will bring a close collaboration for the partnered committees of member states, where Turkey remains an essential founding member as well as a parliamentary assembly member, involving all related human rights fields and other institutions.

Headlines from the meeting

On May 13, EU delegations also held a meeting and discussed their mutual expectations for all involved parties. What helped the delegations improve their cooperation for the purpose of common benefits regarding each member respectively was the threatening global economic system. In the meeting, Turkey requested to improve collaboration to fight the regional terrorist groups such as the PKK, its Syrian affiliates – the Democratic Union Party (PYD) and its armed wing People's Protection Units (YPG) – Daesh and the Gülenist Terror Group (FETÖ).

The meetings, also encompassing foreign policy, energy, transportation, the fight against terrorism, security and economy, promised hope for the upgrading of universal norms and standards of human rights.

The meeting was productive as all parties intended to improve relations in every aspect. The Turkish government initiated a reform program with important headings: Judiciary, Security, Justice and Freedom where the European Human Rights Agreement will be taken into account to enhance a strong law system in Turkish courts, which in turn will lead to a stronger democracy. The new government will enforce the rulings in the court of law on Jan. 1, 2019. Any possible breaching of human rights and freedom will be prevented as European laws will be increasingly implicated into the Turkish judiciary system. Hence, the Turkish judiciary system will improve standards to increase the trust and confidence within the Turkish public. The state of emergency, for example, was in effect due to terror threats and attacks in the country and ended on July 19.

Treasury and Finance Minister Berat Albayrak, one of the participants of the meeting, highlighted the importance of the collaboration of mutual business agreements between Turkey and the EU. Albayrak mentioned the global financial threat that took place on Aug. 10 where the U.S. dollar accelerated overnight against the Turkish lira to weaken the market value and attempt to cause economic chaos and instability within the country. Thankfully, the Turkish public reaction was overwhelmingly patriotic and calm, as the expected crisis ceased to take place. The U.S. then applied commercial sanctions against Turkey, which has caused economic and political aftermaths that have and will continue to affect EU member states as well.

The important aspects of the meeting were the negotiations for the Customs Union and visa exemption that will build the foundation for economic and trading grounds where every party will win/win. The regional peace and stability are important for economic growth as Turkey has increased trade figures compared to the previous year. Turkey and the EU have attained important decisions to improve trade, economic and financial enhancement for a better future in joint benefit goals. The member states may agree to function in collaboration to focus on the strategy that will result in benefits for all those involved. The solution-oriented states having the willpower will be surely capable of resolving all issues. Therefore, upcoming visits to France, Great Britain and Germany will take place soon.

The war on terror

Turkey is in a critical region regarding the infestation of terrorism where internal national security is as relevant as foreign security in another country, since global terror has no borders. The concept of safety and security must be ensured on an international level to provide peace for all the countries worldwide. The fight against terrorism, immigration exodus, narcotics, organized crime is ongoing with the European Union process. Turkey has successfully been combating Daesh.

Turkey successfully overcame the 2016 coup attempt by FETÖ – the shadowy group that had infiltrated into the army and the state – but the expected support from all member EU states did not take place. Unfortunately, Interpol hasn't properly collaborated with Turkey, proving that double standards against Turkey still exist. Turkey has remained loyal to the EU's March 18 agreement about the immigrants rescued from the Aegean Sea. Millions of immigrants have been displaced and there is an identity crisis where most do not have legal documents to prove who they are. This has been a great burden, managed by Turkey alone. Turkey has provided good quality living conditions and facilities in the camps that have been housing the refugees and immigrant exodus that have sought refuge for years. The government has managed to maintain the surplus of millions of refugees and fight against terrorism alongside the human plight, all in accordance to the rule of law.

Turkish relations with the EU have been an ongoing affair that have existed throughout the decades. The EU has always stated regulations to be implemented by the candidate countries, which Turkey has taken into account and applied all the standards. However, each time promises have been broken by the EU as new standards have constantly been raised and added to the list. There has been an unreciprocated wooing that has tired the Turkish people over the years. Will they tie the knot this time around? The next meeting will be held next December.