Can Idlib be a milestone for a peaceful Syria? 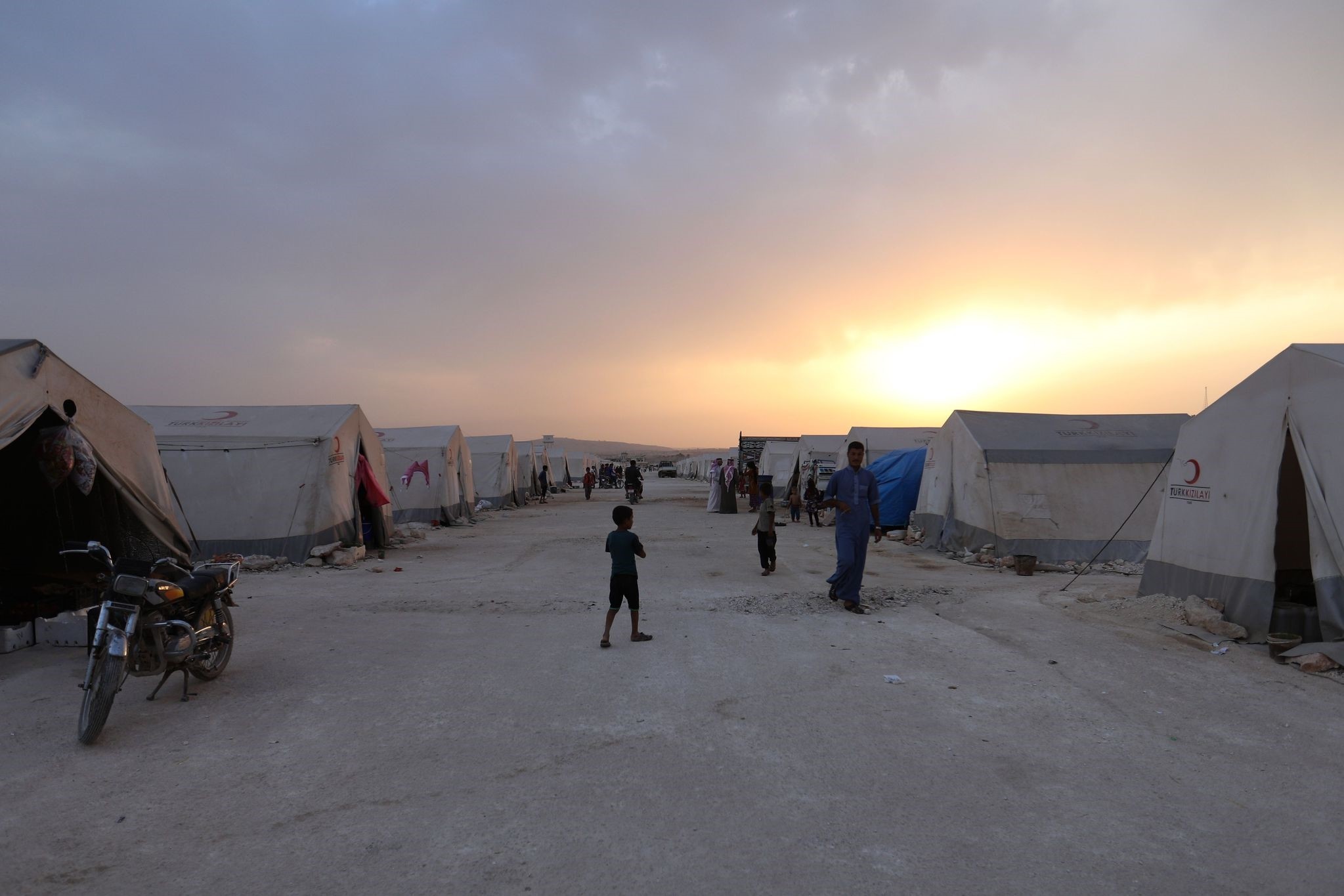 A debate about a cease-fire in Syria in front of the world's press defined the recent summit in Tehran on Sept. 7. The whole world saw there how Turkey prioritizes the humanitarian situation in Idlib. It's another matter whether the debate was accidentally broadcast live or there were other calculations. But we know that the Turkish delegation had not been informed about the upcoming live broadcast. President Recep Tayyip Erdoğan was doing his best to persuade his counterparts about preventing civilian casualties in Idlib at a meeting that he did not know was open to the public. The whole world watched Turkey defend the rights of unprotected civilians as much as its national interests and concerns. We hope this stance will serve as an example for all the major powers of the world.

Erdoğan's stance represented the greatest achievement of the summit. Though his proposal for a cease-fire went unanswered, at least he called for the parties to lay down arms.

Turkey has kept working even after the summit to turn this call into a ceasefire. At the heart of the issue are the lives of 3.5 million people, and it's impossible for Turkey to handle such a massive refugee influx.

Unfortunately, Turkey, which currently hosts around 3.5 million Syrian refugees, could not receive sufficient political or economic support from the other parties, particularly from the EU. Turkey has spent around $30 billion on refugees through both public and private agencies. The EU has given Turkey a hard time, so to speak, before releasing the 3 billion euro tranches. It has tried to use this as a trump card for different political purposes. And now we have come to a point where millions of new refugees are about to knock on the doors of Europe. The world should recognize that the EU's new border force cannot stop these millions. Actually, I wonder how ethical or rational it is to refrain from launching a comprehensive and necessary initiative for a solution to the Syrian crisis and instead setup an army to stop people fleeing death, while allocating 35 billion euros to this force.

President Erdoğan referred to that responsibility in a piece he wrote for the Wall Street Journal (WSJ):

"All members of the international community must understand their responsibilities as the assault on Idlib looms. The consequences of inaction are immense. We cannot leave the Syrian people to the mercy of Bashar Assad. The purpose of a regime offensive against Idlib would be indiscriminate attacks to wipe out its opposition – not a genuine or effective campaign against terrorism."

Yes, Idlib is the last exit before the toll. Committing a bloodbath in Idlib when considerable progress has been made toward a political solution to the Syrian civil war through the Astana and Geneva processes certainly would not serve any country's interests, including the U.S., Russia and Iran. But I think what matters here is the chief priority. When peace is not the priority, different positions emerge, of course.

What will be disastrous at this point in the Syrian civil war is to succumb to opportunism and trickery. The trust achieved between Turkey, Russia and Iran within the Astana process should never be abused and the U.S. should definitely heed Turkey's red line regarding the PKK and the PKK- affiliated People's Protection Units (YPG).

At the moment, 16 million people in Syria oppose Assad. Assad has carried out countless massacres in this ugly war, including chemical weapons assaults. If Syria were to make a new start politically, Assad's involvement in this process would mean a stillbirth with a minority continuing to terrorize the majority. Such a start cannot bring any good. Those who urge Turkey to negotiate with Assad should understand that this is not about Turkey's caprices or obsession.

No doubt Turkey understands and shares the concerns of Russia and the coalition about radical groups. It must be remembered that it was the Turkish army, together with moderate opponents, which dealt the severest blow to the radical groups in Syria. In the coming periods too, meaningful achievement in both political and military processes would be virtually impossible without Turkey's involvement and contribution. As Turkey's importance is so obvious and as it brings no inadmissible conditions to the table, why is this opportunity dismissed? Turkey's sole priority is the protection of civilians and preventing the creation of statelets by terrorist groups along its borders, not only the PKK but also Daesh and other radical groups. Turkey is the country that has suffered the most at the hands of these groups and is conducting the most effective fight against them.

"Idlib is the last exit before the toll. If the international community, including Europe and the U.S., fail to take action now, not only innocent Syrians but the entire world stands to pay the price. Turkey has done everything in its power to stop the bloodshed next door. To ensure that we succeed, the rest of the world must set aside narrow self-interest and throw its weight behind a political solution," wrote President Erdoğan.

His critical messages in the WSJ are of great importance. All active powers should assess well how events will unfold following a disaster in Idlib. It's obvious that such a disaster would have impacts not only on the region but also on the whole world. Syria is a choke point for global peace now. This region has become so enmeshed in various concerns and interests that, unless a peaceful solution is achieved, it's quite possible for countries to enter into a conflict there at some point. And that conflict may quickly escalate. Moreover, it's also obvious what kind of challenges the EU will meet in the face of such a big refugee flow.

On the other hand, parameters for a peaceful solution are clear: Syria should not be divided, as creation of statelets by terrorist groups and sectarian and ethnic clashes are likely to follow; it should be prevented. The only and right way of doing this is to maintain Syria's integrity and enable its development after switching to a democratic system. For this purpose, Syria's neighbors and the U.S. and the EU should collaborate sincerely in line with the R2P (Responsibility to Protect) doctrine of the U.N. Let me repeat it: The issue of Syria cannot be resolved through secret dealings and tricks on the ground. That would be a disaster for the world.

The U.S. had played a meaningful role in restoring Western Europe following World War II. Today, the same role must be assumed to bring stability to other regions, particularly the Middle East. The U.S. veering toward hard power in the wake of 9/11 has damaged the positive role it played for global democracy and peace. President Truman said immediately after World War II:

"We all have to recognize, no matter how great our strength that we must deny ourselves the license to do always as we please."

That understanding should guide the U.S. again. It's time to stop discrediting international institutions that were established or strengthened after World War II. The U.S. continues to punish the U.N., by refusing to meet its financial obligations, over its failure to get support from the organization regarding the occupation of Iraq. Many other similar destructive practices can be cited here. But these institutions had emerged after a series of wars that had claimed 70 million lives. Allowing these institutions to step in to spare the world such global catastrophes is among the greatest achievements of mankind. President Erdoğan underlines this when he says, "The world is bigger than five."

There must be a way

Mankind has to remember again that there are other ways of sharing the world's resources than fighting and colonizing. Hard power-based leadership may be adopted by different countries at times. But living in peace all together depends on the dominance of the idea of global peace and cooperation. This way, a win-win formula can emerge and allow us to use for our peoples' welfare the resources that we would devote to war.

These are not romantic suggestions. We do not have to witness world wars and the deaths of tens of millions of people in order to understand that they are valid and implementable.

Hence Syria stands as an opportunity before us. Why not turn Syria into a milestone of a new realpolitik understanding? Why not disappoint pessimists or those who benefit from war? Mankind has the potential to achieve this. One only needs to believe it.

Turkey speaks out the truth even if it is left alone. It's time for the world now to end Turkey's loneliness in this regard. The world is our common home and peace and security there would benefit us all. So, even if we do not feel an ethical necessity for peace, it is the best choice for utilitarian reasons.