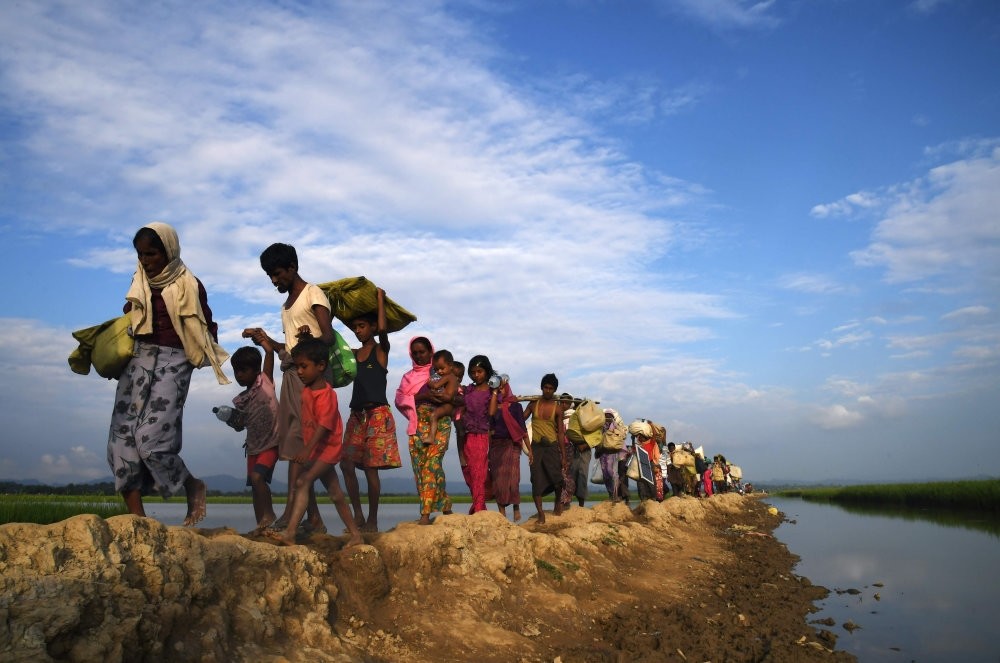 Rohingya refugees walk towards the Balukhali refugee camp after they were forced to leave Myanmar, Sept. 6.
by Teoman Ertuğrul Tulun Oct 03, 2018 12:00 am

In 2017, the United Nations Human Rights Council (UNHRC) adopted a resolution on the human rights situation in Myanmar and established an independent international fact-finding mission. The said mission was tasked with determining the facts and circumstances of the human rights violations and abuse by military and security forces of Myanmar particularly in the country's Rakhine State against the Rohingya people. Human rights violations are listed as including, but not limited to: arbitrary detention; torture and inhuman treatment; rape and other forms of sexual violence; extrajudicial, summary or arbitrary killings; enforced disappearances; forced displacement and unlawful destruction of property. It is mentioned in the resolution that the fact-finding mission was established with a view of ensuring full accountability for perpetrators of the violations and bringing justice for victims. The President of the Council appointed Marzuki Darusman (Indonesia) as chairperson and Radhika Coomaraswamy (Sri Lanka) and Christopher Sidoti (Australia) as members.

The said mission presented its 20-page fact-finding report to the U.N. Human Rights Commission on Aug. 28. According to paragraph 14 of the report, "The mission strictly adhered to the principles of independence, impartiality and objectivity. It sought consent from sources on the use of information, ensuring confidentiality as appropriate. Specific attention was paid to the protection of victims and witnesses, considering their well-founded fear of reprisals." The mission assessed the facts "in light of international human rights law, international humanitarian law and international criminal law, as applicable in Myanmar."

A wide report on the issue

The fact-finding mission also released the full 440-page account of the findings of its 15-month examination of the situation in three states in Myanmar (Rakhine, Shan, and Kachin) on Sept. 18. According to the U.N. Human Rights Office of the High Commissioner statement of Sept. 18, the 440-page account makes dozens of recommendations, including to the U.N., the international community and the government of Myanmar. The account states that the fact-finding mission calls "for the investigation and prosecution of Myanmar's Commander-in-Chief, Senior Gen. Min Aung Hlaing, and his top military leaders for genocide, crimes against humanity and war crimes." It is also critically important to note that the 20-page report, as well as the 440-page account of the findings, refer to the existence of a genocidal intent against the Rohingya in Myanmar.

In this context, from my perspective, the 20-page report remarkably explains the legal framework of genocidal intent in paragraphs 84 to 87 and states the following regarding genocide within the context of Myanmar:

"Genocide occurs when a person commits a prohibited act with the intent to destroy, in whole or in part, a national, ethnic, racial, or religious group, as such. The Rohingya are a protected group under this definition. Their treatment by the Myanmar security forces, acting in concert with certain civilians, includes conduct which amounts to four of the five defined prohibited acts; (a) killing, (b) causing serious bodily or mental harm, (c) inflicting conditions of life calculated to bring about the physical destruction of the group in whole or in part, and (d) imposing measures intending to prevent births," reads paragraph 84.

The said report refers to the critical element of the crime as "genocidal intent" in paragraph 85 and in paragraph 87 states clearly that, "The mission concluded, given these considerations on the inference of genocidal intent, that there is sufficient information to warrant the investigation and prosecution of senior officials in the Tatmadaw (Myanmar military) chain of command, so that a competent court can determine their liability for genocide in relation to the situation in Rakhine State."

In the "Main Conclusions and Recommendations" section of the report, the fact-finding mission draws attention to the following priority areas for action:

"The international community, through the U.N., should use all diplomatic, humanitarian and other peaceful means to assist Myanmar in meeting its responsibility to protect its people from genocide, crimes against humanity and war crimes. It should take collective action in accordance with the U.N. Charter, as necessary," states paragraph 103a.

The 400-page account of the finding of the mission sets out in extensive detail its findings on the extreme violence perpetrated against the Rohingya in Rakhine State. It documents in unsparing detail "how the Tatmadaw (Myanmar military) took the lead in killing thousands of Rohingya civilians, as well as forced disappearances, mass gang rape and the burning of hundreds of villages." The report reveals "a pattern of rape and other forms of sexual violence committed on a shocking scale. Hundreds, possibly thousands, of Rohingya women and girls were brutally raped, including in public mass gang rapes. Many victims were then killed or mutilated. This represents a particularly serious pattern of orchestrated and condoned sexual violence." The report concludes that "rape and sexual violence are part of a deliberate strategy to intimidate, terrorize or punish a civilian population, and are used as a tactic of war." According to the above-mentioned U.N. Human Rights Office of the High Commissioner statement of Sept. 18, Radhika Coomaraswamy of the fact-finding mission stressed, "The horrors inflicted on Rohingya men, women and children during the August 2017 operations, including their indiscriminate killing, rise to the level of both war crimes and crimes against humanity." She also underlined that "the crimes themselves, and the manner in which they were perpetrated, were found to be similar in nature, gravity and scope to those that have allowed for genocidal intent to be established in other contexts."

The fact-finding report on Myanmar brings to the fore once again the importance and relevance of the 1948 Convention on the Prevention and Punishment of the Crime of Genocide (1948 Genocide Convention). As per the U.N. Treaty Collection registration, Myanmar signed the Genocide Convention on Dec. 30, 1949, and acceded to the Convention on March 14, 1956. It should be mentioned that according to the U.N. treaty registration, Myanmar declared reservations regarding Article III (concerning the punishable acts including genocide) and Article VI (concerning the trial of persons charged with genocide) of the Convention.

As it was mentioned in a Center for Eurasian Studies (AVİM) analysis published last year on the occasion of the Dec. 9 "International Day of Commemoration and Dignity of the Victims of the Crime of Genocide and of the Prevention of this Crime," the adoption of the said convention came immediately after the Holocaust and World War II.

The Convention was ratified by Turkey on March 23, 1950, by the Law No. 5630 and the said law was published in the Official Gazette No. 7469 on March 29, 1950. Unlike a number of other state parties, Turkey did not declare any reservation to the Genocide Convention and since then on a number of occasions was among the pioneer U.N. member states for the combat against the crime of genocide. Turkey's support for the International Criminal Tribunal for the Former Yugoslavia (ICTY) and the International Criminal Tribunal for Rwanda are examples in this respect.

As we underlined in the latest AVİM commentary titled "U.N. fact-finding mission report confirm the importance of the Genocide Convention," in order to eliminate the odious crime of genocide, the international community should continue to work on the solid legal basis of the 1948 Convention on the Prevention and Punishment of the Crime of Genocide. At the same time, the international community should avoid all efforts to water down the authority of the said convention by introducing cases not covered by or not congruent with the letter and spirit of the convention.