Does Britain want to turn back time on Brexit? 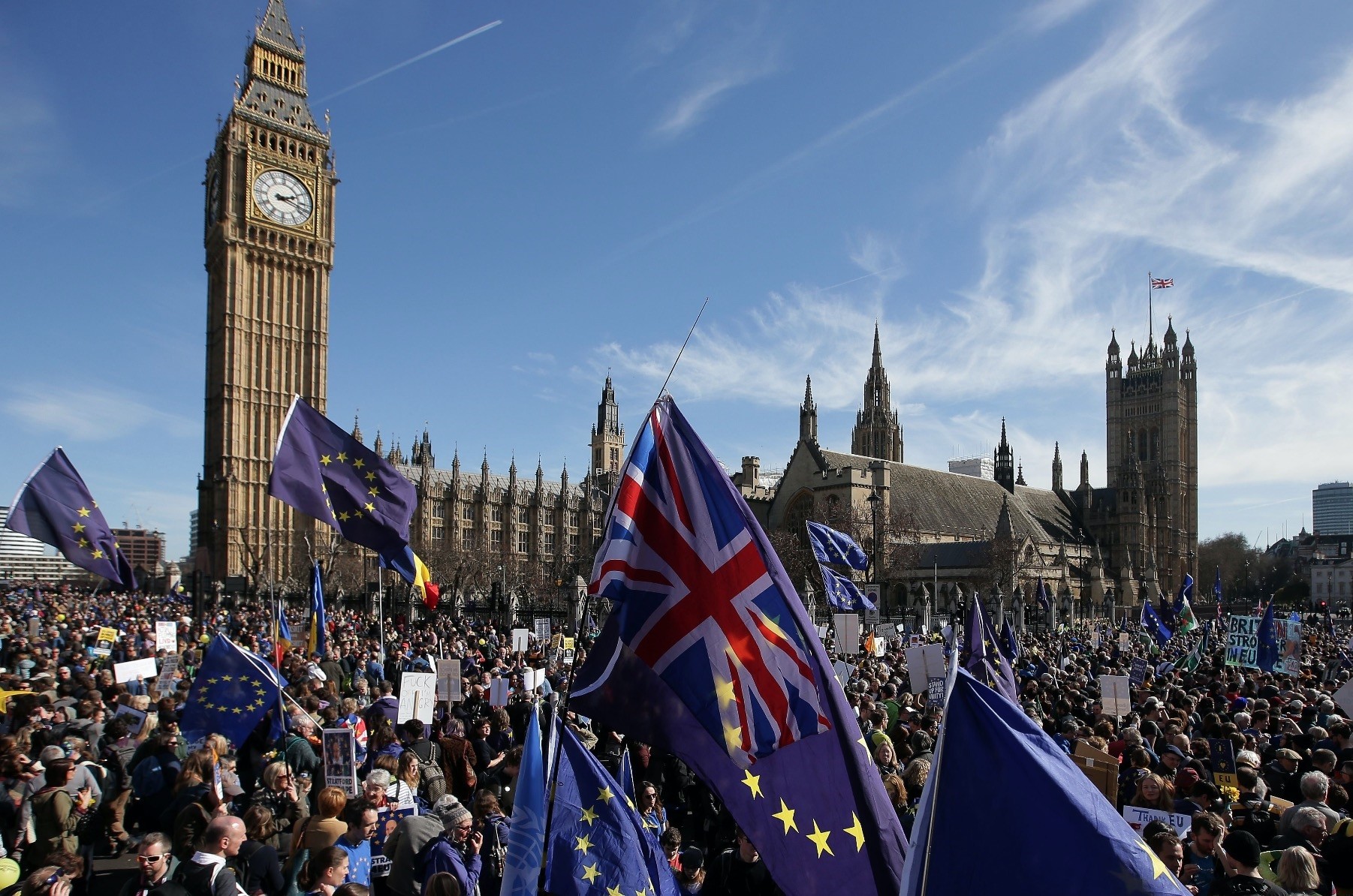 Demonstrators holding EU and U.K. flags gather in front of the Houses of Parliament in Parliament Square following an anti-Brexit, pro-EU march in London, March 25, 2017.
by Nagihan Haliloğlu
Oct 15, 2018 12:00 am

It seemed, and still seems, that while Brexiters want fortress U.K., Remainers seem to campaign for fortress Europe

As anyone who has had any exposure to British popular culture will know, Britain's best-loved TV hero is Dr. Who: a time-travelling "doctor" who helps smooth out not only disputes among galaxies and warring alien tribes, but also reveals extraterrestrial goings-on that have secretly shaped human history. On Oct. 7, the time-travelling doctor graced the screens again in his, well, her, 13th embodiment – yes, this time as a woman. When Jodie Whittaker was announced as the 13th doctor, there was uproar and jubilation of equal measure, with some male fans saying they would no longer watch the series. And it was then that Steven Moffat of "Sherlock Holmes" fame, the series producer since 2010, said that the show was "not exclusively for liberals; this is also for people who voted Brexit." However, given that there is a nebulous campaign to have a second referendum about leaving the EU, the show's central time-travelling conceit seems to cater especially for the "Dr. Who"-loving liberals of Moffat's description who want to "channel" their favorite hero's powers of going back in time.

Clearly, 2018 has seen several news stories that demonstrate the potentially rather debilitating effects of Brexit, particularly in the health services and academia, both sectors, but especially health, being reliant on non-British EU citizens. The alarms sounded by the liberal-leaning media have created an atmosphere in which the same liberals believe that many Brexit-voting folk must have seen their wrong ways and given half a chance, they would now vote remain. The idea of a second referendum has been voiced by certain celebrities, journalists and politicians for a while, but at the end of September, London Mayor Sadiq Khan explicitly called for a second referendum, followed by Nicola Sturgeon, the first minister of Scotland, a part of the union that voted overwhelming to remain.

It's very strange to be watching Brexit from where I am standing. I do not know any British citizen who has voted to leave –in many ways I guess that disqualifies me as a "Britain expert." But I still feel implicated by the way the Brexit campaign was run, warning of "12 Million Turks" that would flock to Britain when Turkey joined the EU. The problem was not so much that the Leavers claimed this; I know Brexiters (a tweet by @petertimmins3 said we should stop calling them Brexiteers, which "sounds swashbuckling," just as calling Boris Johnson simply Boris makes him sound like a lovable fool) are not my friends. It was the way Remainers responded by reassuring the Brexiters that "Turkey will never join the EU, silly." It seemed, and still seems, that while Brexiters want fortress U.K., Remainers seem to campaign for fortress Europe. People have been talking across purposes, and indeed have been talking about completely different things when seemingly they have been talking about Brexit. People from different sides of the political spectrum voted the same way for very different reasons, but that's referendums for you, hardly the sharpest tool in the box when it comes to democratic exercises.

I have been to the U.K. a number of times since the Brexit vote and can happily report that I have not noticed a change in the way people treat me. But I keep hearing from friends how their European colleagues feel insecure about their jobs. An American acquaintance that lives and works in the U.K. has been waiting for months for the renewal of her residency, while it took only weeks before Brexit, preventing her from travelling for her job. Such inconveniences, when added up together, create the "hostile environment" that current PM Theresa May promised to deliver as home secretary back in 2012. So far, Brexit remains an "atmosphere," and the real "leaving" is scheduled to happen in March 2019. Till then, Theresa May is trying to get the best exit deal possible; it seems with not much success. In August, when I suppose March 2019 still seemed far away to her, May was declaiming the slogan "No deal is better than a bad deal," but now she is finding it hard to garner support for her hard Brexit plans. After several meetings between British and EU negotiators it appears that no deal is a probable reality rather than a rhetorical device.

The most contentious matter in the negotiations, it turns out, is not EU citizens' rights to live and work in the U.K., but a border within the British Isles themselves. With Brexit in place, the border between Northern Ireland and the Irish Republic would become a hard border again, a division no one wants to revive. To that end, Donald Tusk has suggested that Northern Ireland stay in the EU, which then, in effect, would mean a hard border within the United Kingdom, which May has already said is unacceptable. Still trying to put a brave face concerning the difficulties the country will face cutting ties with European partners, May announced that now the country would allow in "skilled immigrants," not just from the EU but from the world at large. I would want to rejoice at this news as it would mean job opportunities for several of my friends in the sceptered isle, but May's "hostile environment" started working well before Brexit, and I have seen non-EU friends being refused visas repeatedly. So there really can't be an easing of entry for qualified friends, but am looking forward to chatting with German tourists at the non-U.K. visa queue at Heathrow.

In her Brexit speech last week, Sturgeon said, "Never has so much been lost by so many to satisfy so few." As a spectator of British politics, my experience has been that once they start quoting Churchill, the gloves are off. My Facebook time line tells me there will be a "March for a Final Say" on Oct. 20. It will be interesting to see what other resources the "second vote" campaign will draw upon before March 2019.