The Balkans: Neither the backyard of the EU nor the playground of any country 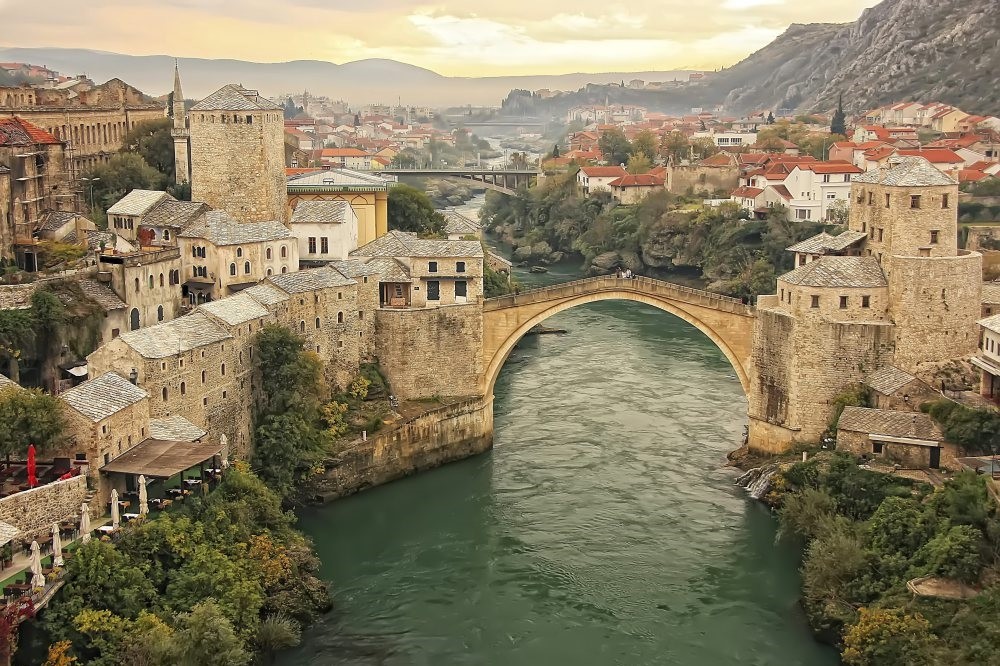 A general view of Stari Most, the 16th-century Ottoman bridge in the Bosnian city of Mostar.
by Teoman Ertuğrul Tulun Oct 25, 2018 12:00 am

The Balkans is not a frequently used term in the European Union context. For the EU, the Balkans mostly means the "Western Balkans," a term with no historical roots and fabricated for a divisive political agenda. In the early 1990s, the Western countries, and specifically the EU countries as a group, decided to ontologically transform the Balkan region, starting with its name. In line with this decision, they divided the Balkans into regions. According to the EU – Croatia, Bulgaria, Romania, and Greece (since they are EU members) are not part of the Balkans anymore.

In this sense, they are part of "Europe," a term that is itself subject to interpretations based on various political agendas. On the other hand, Bosnia-Herzegovina, Serbia, Montenegro, Kosovo, Albania and Macedonia comprise what the EU calls the "Western Balkans" region. When confronted with this term, the question that inevitably comes up is "well, who compromises the 'Eastern Balkans?'" It seems that Turkey is by its lonesome self the "Eastern Balkans" although this is strangely never explicitly stated.

According to the Encyclopedia Britannica, the word "Balkan" is a Turkish word meaning "mountain." The term "Western Balkans," meanwhile, disregards the sociological and historical facts of the Balkans, destroys its integrity and tries purposefully to exclude a certain country, Turkey, from the Balkans and hence from Europe. From my perspective, the term "Western Balkans" is a misnomer. It represents an attempt to "balkanize the Balkans," as in, it is an attempt to fragment an already fragmented region tragically full of historical and current rivalries and animosities.

As I had elaborated in my article in Daily Sabah titled "Half-Hearted EU Enlargement in the Balkans" (May 14, 2018), the EU Commission adopted in February 2018 a strategy under the title of "A credible enlargement perspective for an enhanced EU engagement with the Western Balkans."

The strategy considers the enlargement policy "as part and parcel of the larger strategy to strengthen the EU by 2025. It also presented the enlargement package in the European Parliament in Strasbourg and declared the Commission's recommendation that the EU Council opens accession negotiations with certain "Western Balkans" countries. Furthermore, it made specific recommendations concerning certain other countries of the region.

Some reports and analysis consider the "Western Balkans" region as the southern backyard of Europe, while others refer to the "Western Balkans" as the "playground" of non-Western countries trying to increase their influence in the region. This approach is not limited to press reports or political analyses.

We witness the same understanding in the official statements of influential EU leaders. For example, French President Emmanuel Macron, in a speech to the European Parliament on April 17, ruled out any expansion of the European Union in the context of "Western Balkans" until the Union is reformed. However, he also stated, "I don't want a Balkans that turns toward Turkey or Russia."

Another more recent example is the statement of German Foreign Minister Heiko Maas in the Bundestag on Sept. 12.

During his speech, he reportedly stated that China could replace the EU as a major player in the "Western Balkans." He also expressed the view that, "It's important that we offer these ['Western Balkan'] countries a European perspective, and a reliable one, because they're otherwise turning to other countries, such as China, which are already ready and don't have the values we have."

In addition to these statements made by EU leaders, the European Union Institute for Security Studies (EUISS) had published on Sept. 3 its Chaillot Paper No. 147 titled "Balkan futures – Three Scenarios for 2025." The EUISS website describes the Chaillot Papers as "the institute's flagship publication written by external experts as well as the Institute's senior analysts, and based on collective work or individual research, they deal with all subjects of current relevance to the union's security."

We understand from its title that this Chaillot Paper was prepared to shed light on the possible security situation in the Balkans by 2025, which was defined as a target date for strengthening the EU. Accordingly, the Executive Summary section of the paper asks the following question: "What will the Western Balkans look like in 2025?" What is the most interesting and striking in the paper is that it refers to "disruptive external actors" in the "Western Balkans" as one of the game changers in the said region. The paper tries to explain the game changers in the region and asks the following question: "Several other external actors are actively working against the goal of liberal reform in the region. Will the Western Balkan states be able to mitigate these potentially disruptive inﬂuences, represented mainly by Russia, China, Turkey and the Gulf States?"

Turkey in the region

It is quietly hair-raising to see such a serious accusation against Turkey in a paper prepared under the responsibility of one of the institutions of the EU dealing with the security studies. One would expect that the Chaillot Paper in question provides proper justifications for its accusation. However, this is not the case. According to the paper, Turkey is a disruptive external actor for the "Western Balkans" because it:

Encourages NATO to invite Macedonia to join the Alliance

Enjoys a positive reception among the citizens of "Western Balkan" countries

Is respected by the young Serbian people

The paper thus nonsensically argues that Turkey is a "disruptive external actor" because it promotes friendliness, cooperation, stability and security in the region. After a thorough examination, it becomes apparent that the paper fails to provide any rationale for why Turkey should be designated as a disruptive external actor.

It is utterly deplorable to read such an unprofessional assessment in the flagship publication of the European Union Institute for Security Studies. In my opinion, EUISS owes its audiences a correction for naming Turkey as one of the "disruptive external actors" in the Balkans without providing any proper justification.

The recent assessments and views expressed in the publications, strategies and statements of the EU institutions and leaders lead me to the following conclusion: The EU's interest in the Balkans has been prompted mostly by fears about the roles of other countries in the region. If this is the case, this interest represents the old "spheres of influence" understanding of European powers' colonial expansion into Africa and Asia of the past centuries.

The Balkans are an integral part of Europe. The EU should not consider the Balkans only as part of a "sphere of influence" game. It should respect the historical, social and cultural integrity of the region. In this respect, it should be underlined that Turkey is not simply a geographically Balkan country, but has been socially and culturally a part of this region for centuries.

Turkey is not an outside power vying for dominance in the region, it is instead a Balkan country focused on cultivating its ties with fellow Balkan countries and on furthering the region's development and maintaining its integrity. Turkey has never explicitly or implicitly showcased a rivalry mentality with any other country regarding this region. Nor has anyone been able to demonstrate how Turkey's initiatives represent a danger for the Balkans. Insisting on reading Turkey as an outside power with a negative influence on the Balkans demonstrates a poor understanding not only of Turkey but of the Balkans as a whole.