Global media failing the test in coverage of Palestinian cause 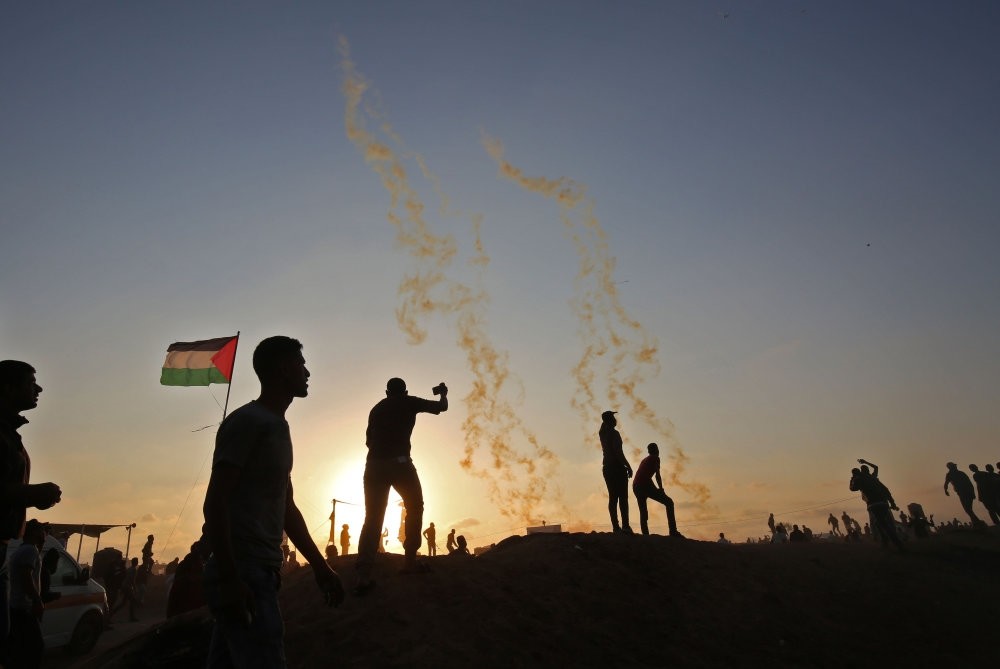 Palestinian civilians protest as tear gas is fired by Israeli troops, near the border with Israel, southern Gaza Strip, May 15.
by Yusuf Özkır
Nov 02, 2018 12:00 am

The mainstream global media, using its wide network of facilities, portrays Palestinians defending their freedom as enemies rebelling against the ‘peaceful' Israeli state

Mads Gilbert and Erik Fosse, the Norwegian physicians who worked voluntarily in the Gaza Strip, which has been under Israeli occupation for years, published a book called "The Tears of Gaza." Shedding light on the extent of Israel's aggression in Palestine, the co-authored book tells the sad stories of how Palestinian people including women, children and elders were killed, injured and disabled by Israeli bombardments and beyond.

The two doctors share with the world unknown incidents they witnessed in a Gaza hospital. The two Norwegians point to the prejudice in the approach of the global media particularly when it comes to the Palestinian cause. To put it more clearly, they emphasize that media groups, which have a global network and high-tech equipment, either broadcast inhumane incidents on the Palestinian land for the sake of Israeli interests or just ignore what happens. They criticize the global media's disregard of moral and professional rules, and try to convey the truth, albeit a little bit.

In fact, from the point of view of the global media, it is easily seen that what is happening in the Palestinian lands is intentionally darkened. It is possible to say that things have been getting even worse after Donald Trump became U.S. president. The Trump administration's direct pro-Israel stance has negatively affected the interest of the global media in the region. The criticism of the brutality of the Israeli state, which was more frequent before Trump's term, is on a declining trend. Even if Israel's occupation policy in Palestine since 1948 could not be prevented, the media's approach to such open-ended murders could have been more condemning and critical. At least, Israel wouldn't be as relaxed as it is while perpetrating attacks on local civilians. The Israeli attacks did not stop at all and the world has been quite silent. It can be said that the general broadcasting policies of the U.S. and European media on Palestine seem to be affected by the White House's approach to protecting Israel.

Although humanitarian concerns should be emphasized according to the basic principles of journalism, today there are different parameters that are more determinant in the news on Palestine. Regarding the famous dilemma of "the power of media or the media of power," the news on Palestine shows that the latter is more valid.

Backed by the U.S. administration, Israel is playing a dangerous game with the aim of fully invading Palestine. The news of recent actions and policies with the cooperation of Israel, the United Arab Emirates (UAE), Egypt and Saudi Arabia show that the Israeli state is preparing to take the last step in its goal.

In Palestine, which Israel has occupied piece by piece since 1948, there is no region under the control of Palestinians except the Gaza Strip and the West Bank. So it is accurate to say, Gaza, which has been under blockade since 2006, is like an open-air prison without electricity, water, gas, medicine or food.

Calls for help to end this situation made by countries, particularly by Turkey and Qatar, are constantly ignored by Israel. In the West Bank, the Israeli soldiers' arbitrary violence and arrests are still going on. Israeli pressure and violence in Jerusalem, where Al-Aqsa Mosque is located, has intensified since the U.S. moved its embassy to it in May 2018. Al-Aqsa Mosque, the first Qibla of the Muslims, and other holy places in the region have been attacked and invaded by fanatic Zionist groups while Muslims are not allowed to pray in those places. Although the Islamic world and the media are not very aware of it, it is important to emphasize that a process in which the Muslim sites in Jerusalem are gradually being destroyed has already kicked off.

The killing of Aisha al-Rawbi

Similarly, there are many signs to show the plans to remove Palestinians from their lands still continue uninterruptedly. With the intense support of the Trump administration, the Tel Aviv government, under the leadership of Prime Minister Benjamin Netanyahu, is trying to establish new settlements on Palestinian land by destroying the houses of Palestinian civilians.

Fanatical Zionist communities are accompanied by state troops as they destroy Palestinian houses. Aisha al-Rawbi, 47, who was in her car on Oct. 12, was killed by a stone thrown by new Zionist settlers.

What's unfortunate is that al-Rawbi's murder, which shows how brutal and dangerous the Israeli occupation of Palestine is, saw no global reaction. Neither politicians nor the world's mainstream media have taken a primary position on this event. Moreover, more than 200 Palestinians have lost their lives in Gaza since the start of the "Great Return March" on March 30 this year, but the media hasn't fulfilled its duty regarding this sad story. The killings of Palestinian civilians continue.

The approach of the global media to the Palestinian case is largely disrupted by the nature of the incident. In addition to the figures given by news agencies, it is difficult to encounter a journalistic reflex that will carry the matter to the headlines. The coverage the issue gets in the news is insufficient to create strong public opinion. One of the first journalistic principles is that there is a direct relationship between the way in which the news is told, which page it is on and public opinion.

In other words, there is a significant difference between telling the same news on the first page of the newspaper with a photo or putting it on the eighth page. The effect of the two on the reader cannot even be compared. Therefore, telling the news about the Palestinian case or putting it in the newspaper is not, of course, enough when taking into consideration the above-mentioned factors.

Perhaps news that is told only on one of the inside pages may trivialize the extent of the story. Therefore, since it cannot find a proper place in the media, the Palestinian cause suffers from a lack of sufficient public opinion. The same reasons are valid for television broadcasting.

Therefore, Palestinian suffering and Israeli occupation and violence do not have sufficient public reaction and opinion. And so a story of inhumanity becomes victim to the deliberate ignorance of powerful media outlets, just like the Norwegian doctors highlighted in their highly esteemed book.

Trump's pro-Israeli occupation approach and scandalous decisions, such as the Jerusalem embassy crisis, also fuel the fire in an already-chaotic region and make the case even worse. In fact, this story should have turned into a success story of the global media; if it could fulfill its actual duty and hear the voice of the oppressed people and force the international community to take action in order to end the tragedy. On the contrary, while the world is mostly in need of the media's credibility in such a time period, it hasn't been able to contribute in finding a solution to one of today's biggest global crises.