The 2018 midterm elections and their implications for Trump's presidency 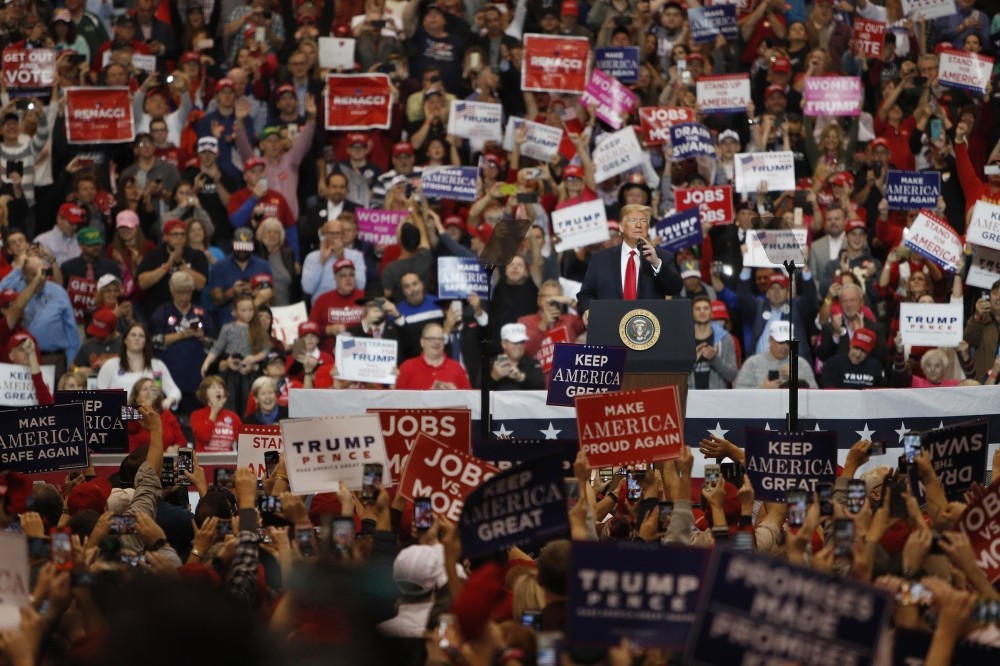 U.S. President Donald Trump speaks to supporters during a rally at the I-X Center in Cleveland, Ohio, Nov. 5.
by Gloria Shkurti Özdemir Nov 09, 2018 12:00 am

After the 2018 midterm elections, the Democrats' focus will be more on domestic affairs, while Trump intends to pursue a more active foreign policy and use it as a political opportunity

Tremendous success tonight! This is how Trump evaluated the 2018 midterms via his Twitter account. Nevertheless, with Republicans losing the House of Representatives the tremendous success of the elections can be highly questioned.

Unlike most of the previous midterms, America and the world were waiting eagerly for the results of the 2018 midterm elections. At a time when partisanship, polarization and identity politics are the main determinants of American politics, this midterm was more a referendum on Trump and the future of his presidency than a mere race between the two political parties. Not surprisingly, the turnout for these elections (not yet official) is believed to be higher than 36.4 percent as in 2014.

In this election, 435 members of the House of Representatives and 33 members of Senate were up for elections. At the time this article was written, more than 90 percent of the votes were counted and the Republicans expanded their majority in the Senate (Republicans: 51 seats, Democrats: 44 seats), while they lost the House of Representatives to the Democrats who have not had a majority since 2010 (Democrats: 223 seats, Republicans: 197 seats).

This means that while the Democrats will be able to check and balance Trump's actions, they are not powerful enough to stop his unpredictable policies. For a better understanding it is important to see the impact of the midterm elections from the domestic and foreign policy perspective.

In the domestic realm, the Democrats will have subpoena powers and also will be able to obstruct Trump's policy agenda. First, with a majority in the House of Representatives, the Democrats will be able to start more investigations on Trump on issues such as his tax returns, which Trump has refused to disclose, or the alleged Russian interference in the presidential elections. Yet, this would not mean that the Democrats now have the power to impeach Trump. Impeachment needs the approval of two-thirds of the Senate, namely 67 senators, which is a high number to be achieved at a time when the Democrats themselves are divided on this issue. Many Democrats are waiting for the results of the Robert Mueller investigation regarding external interference in the presidential elections. Yet, just a few hours after the midterm elections, Trump fired Attorney General Jeff Sessions, replacing him with acting Attorney General Matthew Whitaker who has not concealed his criticism of the Mueller investigation and further suggested killing the investigation by limiting the budged provided to Mueller.

In American history, when the chambers of Congress have been divided between Democrats and Republicans, presidents tend to be more active in their foreign policy to direct attention away from domestic complications. Something similar can be expected from Trump as well. However, despite the fact that the Democrats will tend to replace the liberal values at the center of American policies, a drastic change in Trump's foreign policy is not likely.

Regarding transatlantic relations, many European politicians have translated the Democratic win in the House of Representatives into hope. While Trump will continue to be skeptical of the European powers and criticize them, it is very likely that the Democrats will try to stop Trump from re-introducing more tariffs on the EU.

The Middle East will be a main focus of Trump in the following two years as the quagmire in the region leaves more space for action. Trump's policies towards Saudi Arabia, Iran, Turkey and the Israeli-Palestinian conflict deserve special attention.

After the murder of Jamal Khashoggi, Trump is left at the crossroads regarding one of his closest allies in the region, Saudi Arabia. Considering that the Kingdom is the biggest arms costumer for the U.S., Democrats may push Trump to block/limit arms sales. Furthermore, the Saudi intervention in Yemen likely will face increased opposition.

The midterm elections were held just a couple of days after Trump put sanctions on Iran. While Democrats gaining power in the House of Representatives may be seen as a positive development for Iran, the euphoria should not last long as the powers of the House of Representative are not enough to stop the sanctions. For this reason, a dramatic change in Iran policies is not expected, and the sanctions will continue.

Similarly, dramatic changes cannot be foreseen in terms of Turkish-American relations. A couple of days ago, the Trump administration offered $12 million as a reward for three PKK leaders. The Turkish side considered this a significant step but not enough as long as the U.S. keeps supporting the People's Protection Units (YPG) in Syria. As Trump's policy toward the YPG is unlikely to change, relations with Turkey will remain the same as well; however, it is important to highlight the fact that the tension between the two states has lessened considerably in the last weeks.

In terms of the Israeli-Palestinian conflict, it is expected that Trump will announce more details of his Israeli-Palestine peace plan. Considering that the stance of Republicans and Democrats towards Israel is similar, tensions between Democrats and Trump are not probable.

Last, Russia and China are two states that have been at the center of Trump's presidency. While the trade war with China is unlikely to change, as both parties support a tougher stance toward it, the Democrats will push the investigations regarding Russian influence in the presidential elections; yet, at the individual level, Trump may maintain warm relations with Putin.

To conclude, after the 2018 midterm elections, Democrats will focus more on domestic affairs, while Trump will tend to pursue a more active foreign policy and use it for political opportunity. Furthermore, Trump's unpredictable policies will persist, and there is little the Democrats can do in the House of Representatives. Though they can put some pressure on Trump, this will be felt more in domestic affairs rather than foreign policy.

* Assistant to the editor-in-chief of Insight Turkey/SETA