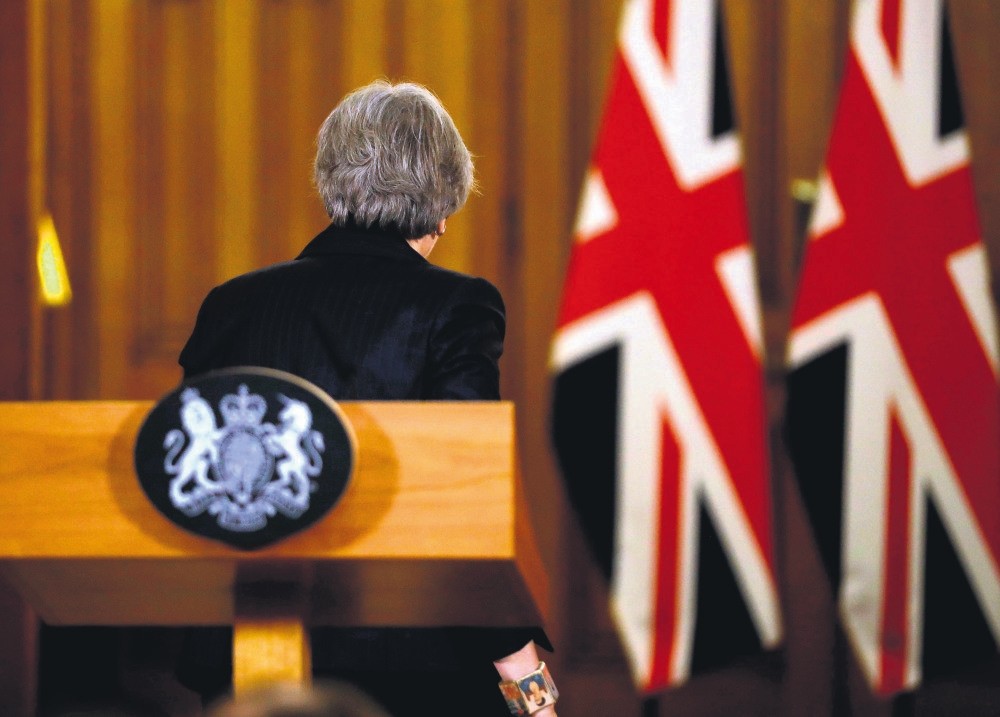 U.K. Prime Minister Theresa May leaves the podium after giving a press conference in central London about the Brexit process, Nov. 15.
by Jurgens Klaus Nov 21, 2018 12:00 am

A border cutting through the backyards of private homes, in the middle of rivers, dividing entire towns and neighborhoods; checkpoints at roads and even uniformed patrols stirring up memories of sad times everyone had hoped were gone for good. God forbid but perhaps even a return to violence as it is not impossible that no one concerned will be happy with that kind of reality.

This scenario was one of the worst, yet theoretically and unfortunately still possible outcomes of a hard Brexit; an outcome that probably everyone on shared Ireland wants to avoid at all cost. Hence Brexit after last week's publication of the 585-pages long accord is today's article topic, yet seen with Irish-Irish eyes.

Flashback: Close observers of all things referendum now and then and on location often say that above all else Brexit was a political miscalculation of enormous proportions, actually an individual miscalculation of enormous proportions. As a matter of fact, then-Prime Minister David Cameron had taken his referendum to the public because he wanted to outmaneuver exactly those (party) opinion makers who had always asked to leave the European Economic Community (EEC) and then the European Community (EC) or later the European Union. A "Remain" victory was what he and his aides had anticipated. Well, as we all know things turned out differently and the rest is history…The Irish-Irish dimension

Let us begin with a technical note: Both Ireland and the Republic of Ireland are the correct terms to describe the EU member state. For clarity this article uses Republic. And what one hears from over here on the ground is a cautiously optimistic evaluation of the 585 Brexit Withdrawal Bill pages.

Brexit always had a number of thorny issues with avoiding a renewed hard Irish border top priority, which is most definitely a major concern when seen from the Republic. There was the question about how much money the U.K. would need to pay out to Brussels – currently a total of up to 39 billion euros, although in installments, and up to 10 years – and the debate over free movement between the U.K. and the EU but these had been topics of less relevance to Dublin. The border was and is the main subject.

Twenty years later that peace and stability have become normality and there are other things analysts must remember: Between the Republic and the entire U.K. including Northern Ireland we find what is known as the Common Travel Area (CTA) which in principle is a smaller version of the Schengen Agreement of which neither the Republic nor the U.K. are members; it has been announced by the British government that no matter what type of Brexit happens, it would stay in place; it is a "borderless" accord to allow Irish and British nationals to freely travel between both sides as well as to settle, study and work.

The Republic was at the forefront of the Brexit debate though. As a member of the EU, it was bound by any joint decisions in this regard but it appears as if Dublin made its voice heard very clearly albeit in diplomatic circles more so than via public statements and greatly helped to prepare for last week's compromise deal.

Besides, public support for the EU is at an all-time high, currently standing at 90 percent, a dream figure in most other member states. It underlines that her citizens want to remain in the EU yet want to make the most of Brexit now that it has become reality, too.

Northern Ireland and its population suffered greatly in past conflicts. There was a time when few would visit or invest in this fine part of the U.K. The hard border between the north and the south added to tensions. The Good Friday Agreement played a crucial role in the return to peace and this is written in the context of that there had always been groups in favor of a closer union with London and others who prefer a national unity strategy for the entire island of Ireland.

Brexit, unfortunately, brought back memories of that past as old divisions popped up once more. Not surprisingly over here there was a clear majority vote "Remain" (56 percent).

However, as Theresa May needs partners for her otherwise minority government, it seems likely that by the time the deal goes for a vote in the Parliament, the Democratic Unionist Party (DUP) would not vote for it. But when listening in on entrepreneurs and the wider business community, including those active in the agricultural sector, one understands that they actually support May's third Brexit way which could see the whole of the U.K. staying in some form of a Customs Union with the EU unless a separate and all-encompassing free trade agreement would be agreed upon.

What is encouraging up here, too, is that we find fault lines and ideological divisions but nothing of the sort that rocked Northern Ireland's peace and stability previously. It is all about debating what is best for Northern Ireland and its relations with the Republic. Opinion is more fractured in the Republic though.

What impacts Northern Ireland most is the question about what the term "backstop" actually implies. It is commonly understood that it entails that if there is a last-minute no-deal between London and Brussels that Northern Ireland would somehow stay in the Customs Union hence avoiding an external border between the EU and Northern Ireland. What few have calculated as of yet is another scenario: populist sentiment in the U.K. gains the upper hand, early elections are called for one reason or the other and a second Brexit referendum is tabled. Then all currently agreed upon parameters would be open to renegotiating with an open outcome unless "Remain" would win.

Brexit still in the making

After a rocky Cabinet ride, British parliamentarians must still approve or reject Theresa May's third way Brexit deal, too. Thus confusion still surrounds an otherwise much-cherished announcement, much cherished if seen from an Irish-Irish perspective. Yet many on the mainland argue that her deal is not what the British people had been asked to vote upon in 2016; they either say that the only solution is a new Brexit referendum or to scrap the present accord and renegotiate. Leading Cabinet members, as well as Brexit Secretary Dominic Raab, resigned over the matter.

The most pressing question is whether in the case of a hard Brexit, which is theoretically unfortunately still an option, perhaps after early elections and perhaps even after a second referendum in the U.K. should "Leave" gain the upper hand again although "Remain" would expect to come out victorious, too, the CTA can survive.

The moment CTA is shelved or suspended or even only substantially modified, a hard border is on the negotiating tables once again. From what one hears both in the Republic and in Northern Ireland something which must be avoided at all costs yet approaches may differ, see the DUP's stance for example. One can only hope that in the interest of peace for the Republic of Ireland as well as Northern Ireland that whoever negotiates for either London or Brussels today and tomorrow will keep this in mind.