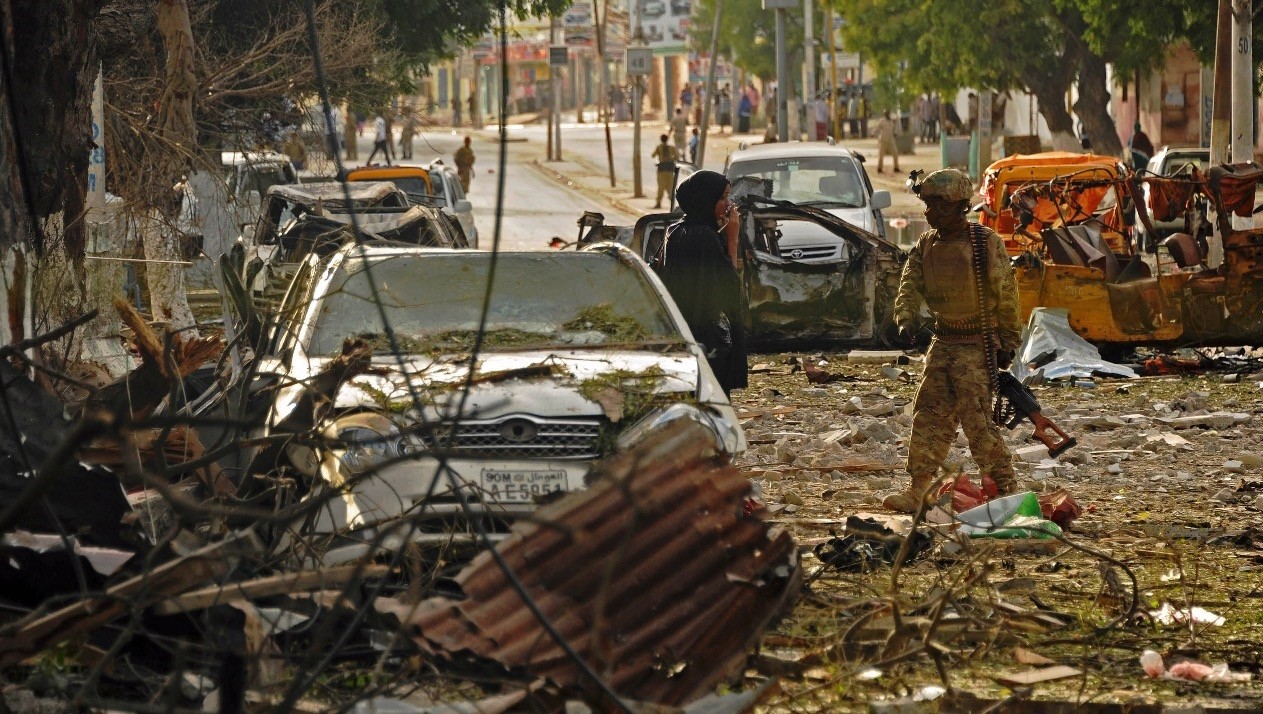 A woman stands next to a soldier at the scene of a terror attack on the Ambassador Hotel claimed by Somaliau2019s al-Qaeda-linked al-Shabaab, in Mogadishu, June 2, 2016.
by Mohamed Salah Ahmed Dec 01, 2018 12:00 am

The history of Islam on the Horn of Africa dates back 1400 years. It came from the Arabian Peninsula through migration and trade, mainly from Yemen and Oman. In Somalia, during the 14th century many Somalis converted to Islam and gradually Islam became the dominant religion. Today, almost 100 percent of Somalis are Sunni Muslim and largely adhere to a Shafi'i version of the faith.

In the beginning, the Sufism interpretation of religion dominated Somali social and political spheres and allowed them to successfully accommodate religion with politics. During the anti-colonial era, Sufism played an important role and was used by anti-colonial leaders to confront and fight the colonial powers.

During state formation, although some people could argue that the state was secular, civil government leaders were affiliated with Sufism. Nevertheless, religion was never a threat to the state. However, after the coup in 1969 ended the civil government, the military regime shifted toward the Soviet Union and adopted scientific socialism. In the beginning, the military regime stayed out of religion and showed secular state behavior.

However, that did not last long because the regime's socialist political mobilization did not match well with religious traditions. And finally, the military regime had to interfere in religious practices to successfully implement scientific socialism.

Concurrently, new religious ideologies were imported to the country - mainly from Egypt and Saudi Arabia and led by clerics that had received their religious educations there. They brought different ideas and interpretations that contrasted with Sufism dogma and even declared them a null and void sect because their religious practices indicated that they committed "Shirki," which associates partners with Allah, making them infidels. They undermined and clashed with the military regime, claiming the righteous teachings of Islam. This marks the beginning of a radicalized interpretation of Islam. They lacked key principles that Islam promotes, such as acceptance, tolerance, peaceful debate and more. Violence has been their only choice.

Their emergence was a part of a global phenomena, part of the "awakening Islam project" taking place in the Muslim world that arrived in Somalia in the 1970s. Their arrival marked the birth of radical Islamists in Somalia. However, the military regime's oppression and crackdown, more or less, helped them gain more supporters. They advocated for the establishment of an Islamic state, like other Islamists movements that existed, and to attain that they called for jihad.

As a matter of fact, there is confusion with the primary meaning of the word "jihad" in recent years, as some scholars argue that it's martial in nature, while others focus on its spiritual dimensions. Linguistically, the term refers to the idea of "struggle," and early Islamic sources draw a distinction between greater and lesser jihad. The first is regarded as individual duty and a person's struggle to live in accordance with the religion's obligations, while the second is regarded as efforts to bring the surrounding communities into obedience with Islam with clear instruction by how and who. However, the second interpretation has become popular and hijacked even the general meaning of the concept.

Furthermore, the debate is not limited only with the way Muslims understood and interpreted the concept, but also the announcement and declaration method. Interpreting this concept has seen various transformations in accordance with time and situation. Traditional religious scholars regarded jihad as defensive in nature and to be used when Muslims face external threats and give the authority to announce to the state. This body of thought makes a clear distinction between combatants and non-combatants.

In the contemporary period, as a reaction to colonialism and imperialism, some figures systematically dismantled or radically reinterpreted the classical meaning of the concept. For instance, unlike traditional scholars, the revisionists have argued that jihad can be declared or announced by the proper political authorities and blamed the existing states for abandoning the true path of Islam. This reinterpreted jihad as an individual duty incumbent on every Muslim and has been a strong reference for contemporary "jihadi movements" and groups such as al-Qaida and later Daesh. Undoubtedly, various geopolitical events contributed to the triumph of this interpretation among Islamists in the Middle East, particularly the Arabian peninsula: the failure of the Arab nationalist armies in the 1967 war that resulted in the loss of Jerusalem, Anwar Sadat's peace treaty in 1979 with Israel, which most Islamists perceived as a betrayal of Islam, and the success of Afghanistan jihadis to oust the Soviet Union.

Despite, geographical and political differences, most Islamic movements in Somalia accepted the second interpretation of jihad. They had the notion that Islam was in danger and needed to be saved, which does not require waiting for the birth of an Islamic state. Thus, it is our responsibility to establish it in Somalia. Sects like Al-Itixaad, which was promoting the Wahabism ideology, would be a good example. Al-Itixaad was one of the Islamist movements that emerged in the 1970s. They opened military camps in south and northeastern Somalia and trained many fighters; even some of the prominent leaders of Al-Shabaab graduated from those camps in 1991-1996. During that time, they allied with al-Qaeda and brought some foreign fighters to the country. The Islamic Courts Union (ICU) emerged in 2006, later breaking into different sects, such as al-Shabab.

Al-Shabab has been operating in Somalia and the Horn of Africa since 2006. They have carried out many outrageous attacks that claimed the lives of many innocent people and assassinated politicians, community elders and religious clerics. Although weakening and losing control of most of the territories today, they still operate effectively and carry out operations, such as the outrageous murder of a cleric and 14 others, including his wife on Nov. 26. They accused him of insulting the prophet, which he denied. It was not the first time that al-Shabab killed a cleric, but this incident exposed a bitter reality: Radical ideology and interpretation are not just limited to militant groups, but also rooted within society. In other words, it has become a social norm. Thus, defeating and eradicating radicalism is not just dependent on the downfall of al-Shabab but must look beyond the militant groups that emerge one after another.

It is a bitter reality that there are many beliefs and values that al-Shabab and the rest of the society share. In fact, al-Shabab are from the society, but no wonder when you meet the same religious views and behavior from the random person.

This points to the deeper causes of this problem and has something to do with religious interpretation and beliefs, which need to be remedied. However, the Somali government must inevitably carry out social re-educate and reinterpret certain concepts that had been reinterpreted by radical clerics in the 1960s and 1970s. Effective government institutions are critical for this process with religious clerics playing an import role in dismantling and undoing this radical ideology that has claimed the lives of many innocent Somalis.