Elections in Bangladesh: Tough run for Hasina in the days ahead 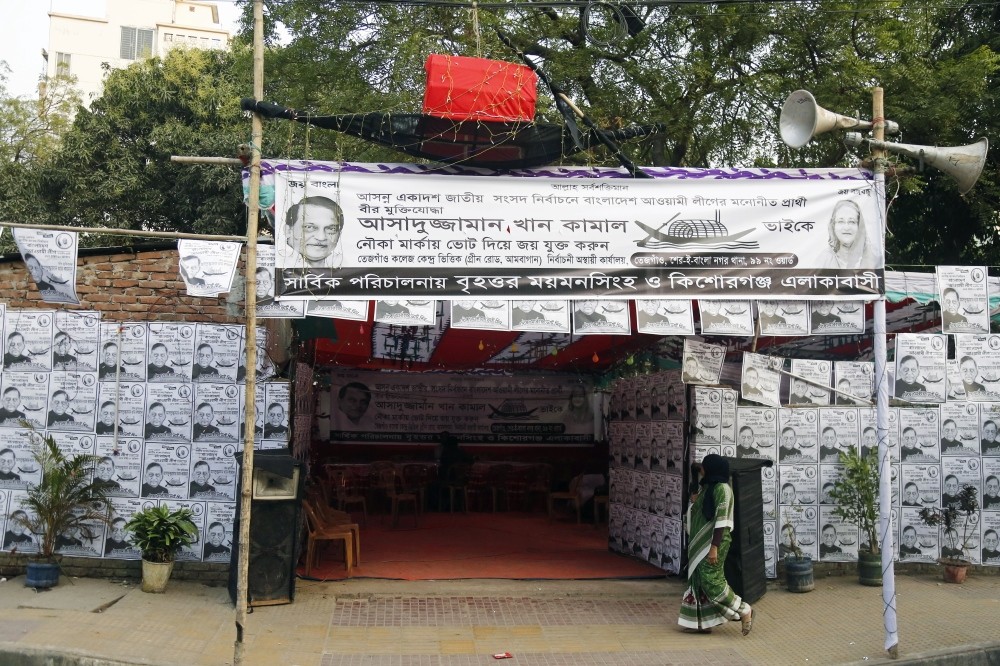 A Bangladeshi woman passes by a temporary election camp installed ahead of 11th national elections for parliament in Dhaka, Bangladesh, Dec. 12.
by Imran Khalid Dec 19, 2018 12:00 am

The evolution of politics in Bangladesh has been quite erratic since its inception in 1971. There have been 10 general elections in the country since and each time it has triggered different textural changes to its whole political fabric. The political scene in Bangladesh has oscillated between democracy, military dictatorship and an ugly amalgam of both. Each election has produced something new and further added more twists to the already febrile and charged political atmosphere in which questions about who actually controls this country have popped up more vigorously. The same is expected in the forthcoming national elections.

Bangladesh's Election Commission announced recently that the election will take place on Dec. 30 despite the imprisonment of the leader of the main opposition party and the banning of its chief partner, Jamaat-e-Islami. As expected, this announcement has exuberantly charged the political atmosphere.

The opposition has expressed serious concerns that the election will not be free and fair; therefore, it has been demanding the installation of a caretaker setup to supervise the election process. On the other hand, the ruling Awami League party has sternly rejected this demand by the opposition for a caretaker government ahead of the election as "unconstitutional." The opposition's fear is very genuine and has gained further strength after the witnessing of a massive crackdown against the workers and office-bearer of Khaleda Zia's Bangladesh National Party (BNP) in recent months. As per the claims by the BNP leaders, the Awami League has conspired to squeeze BNP supporters in unending litigation by initiating almost 90,000 lawsuits against it – entrapping more than 2.5 million BNP workers and supporters in a never-ending legal maze. The intensity of this one-sided crackdown can be gauged from the fact that, in the month of September alone, more than 4,500 supporters and workers of the BNP were sent to jail on fabricated charges.

Zia herself is entangled in 34 different cases; her son Tarique, the BNP's acting chairman who lives in exile in London, was also sentenced to life in prison at home over an alleged 2004 grenade attack on Prime Minister Sheikh Hasina. Irrespective of the polite talk of Sheikh Hasina in public, her government is literally bent on squeezing the BNP before the next elections. Hasina's father, Sheikh Mujibur Rahman, who led the country to independence in 1971, was murdered along with most of his family in 1975. But, whenever in power, Sheikh Hasina has always appeared to be extremely vindictive, not just toward her arch political rival Zia and her party, but also toward an ever-growing list of perceived adversaries.

Despite many evolutionary turns and twists in Bangladeshi politics, one thing has been a glaring constant in the last two decades: the bitter rivalry between the two most powerful female politicians, Sheikh Hasina Wajed, the leader of the Awami League and current Prime Minister, and Zia, a two-time former prime minister and head of the BNP. Another unique feature of the electoral game in Bangladesh is the inverse relationship between the fair elections and voter turnout. Whenever the elections were "fair," the voter turnout was very strong, and whenever the election process was maligned, the majority of voters preferred to stay at home. Put simply, low turnout means low credibility. The Awami League, which came to power in 2009 after registering a landslide over Zia's BNP-led alliance, has accumulated "fat" and become quite despotic after being in power for so long. It seems fully committed to grabbing a third consecutive five-year term at any cost. This fierce determination of the Awami League to retain its control of the corridors of power has dramatically changed the political atmosphere.

In 2014, Hasina comfortably led her party's success in a highly controversial election that was boycotted by the BNP and other opposition parties over allegations of pre-poll rigging. But this time, the BNP is in no mood to repeat its mistake of leaving doors open for the Awami League. One major change in the BNP's strategy was to divorce its long-standing ally, the far-right Jamaat-e-Islami, and instead join a coalition of smaller, secular parties to form a broad opposition group, the Jatiya Oikya Front, with 82-year-old Kamal Hossain, a widely respected constitutional lawyer, as its figurehead. The month of October saw another little surprise when the otherwise ruthless Awami League suddenly turned sweet and put the brakes on some its ruthless hounding of the opposition, particularly the BNP. With little respite in its ripping down every aspect of the opposition's election campaign, Prime Minister Sheikh Hasina herself invited the leaders of the Jatiya Oikya Front for talks, promising to favorably consider their demands for guaranteeing fair elections. But despite such initiatives from Sheikh Hasina, there is little likelihood of any reconciliation between the two sides on the Oikya's demands, which include ending the trials and imprisonment of her political opponents, including Zia, dissolving parliament and forming a neutral caretaker government during the election period, and ensuring security for and oversight of the voting.

The Awami League has shown some leniency as far as political prisoners are concerned and is also attenuating its own government to an election-period skeleton administration. But it will not go beyond this. The Oikya Front has made it clear that it will further intensify street protests if its key demands are not met; yet, it is very obvious that they will not flirt with the idea of provoking a clampdown or resorting to a boycott. The sour experience of abstaining from parliament has taught some tough lessons to Zia and her followers.

Their absence from parliament allowed the Awami League to not only deeply infiltrate powerful instruments of state and blackmail BNP loyalists in the powerful business community, but also to chop down the infrastructure of the BNP's hierarchy. But despite such a long persecution at the hands of the Awami League, the BNP still retains a strong grassroots following and by all accounts, has the potential to stage a comeback in a big way on the pretext of a sympathy vote. The exceedingly aggressive tactics of the Awami League are expected to backfire in some important constituencies, and there is every likelihood of a fierce contest on election day. At the same time, fears are whirling about the possibility of pre-election riots in some sensitive areas. The Awami League is also banking on support from its smaller political partners to offset the mounting pressure of the growing popularity of the Jatiya Oikya Front. Nonetheless, a fierce battle is expected in the run-up to this historic election in December.

* Freelance columnist based in Karachi, Pakistan