The Palestinian case in Turkey 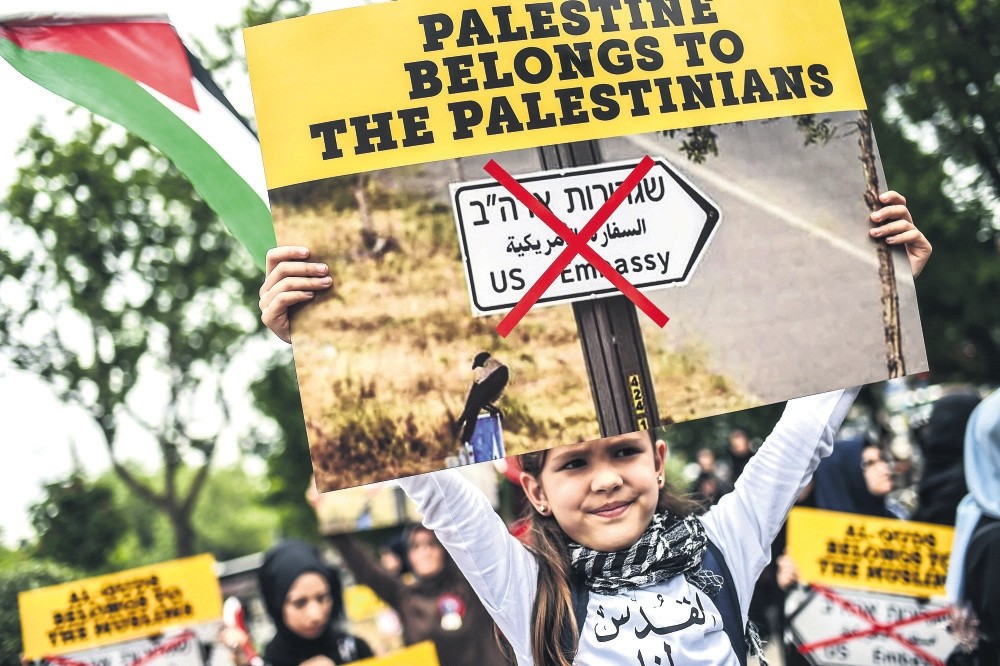 A young Turkish girl holds a placard during a protest against U.S. President Donald Trump's controversial decision to recognize Jerusalem as Israel's capital, Istanbul, May 11, 2018.
by Fadi Zatari Jan 15, 2019 12:00 am

The Palestinian cause occupies a unique place in Turkish political discourse. It unites all political parties from left to right in supporting the oppressed Palestinians and in standing against Israel's injustice and apartheid. Throughout my stay in Turkey, I have often heard Turkish people openly decry Israel's state-sponsored terrorism and acts of injustice. Remarkably, there is huge solidarity and support for Palestinians in Turkey both at the governmental level and through nongovernmental organizations (NGOs). However, throughout my own interactions with many of the Turkish NGOs working on different aspects of the occupation of Palestine and the harms that it manifests, I noticed that many of their activities have a predominantly religious rhetoric, which might stay limited only to slogans. This approach can motivate the religious Turkish people to exhibit greater solidarity with the Palestinian people, but this alone cannot change much of the reality in the colonized Palestinian lands, where Israel's apartheid regime controls every aspect of Palestinian life, freedom and action.

Many of the academic studies in Turkey on Palestine or on Israel, including books, articles, and even lectures, are mainly historically and/or religious oriented. Indeed, studying Palestine or Israel from historical or religious points of view is significant. Nevertheless, there are many neglected issues such as the political social aspects of the Israeli-Palestinian conflict and the racist structures of the Zionist movement. Israel deals with Palestinians based on pure racial discrimination. This is to argue that Israel should be considered in Turkish academia, research centers, and media as an apartheid regime.

There are a huge number of instances that demonstrate that Israel is a racist and apartheid state in the way it treats Palestinians. Israel is involved in the daily harassment of Palestinians, restricting their freedom of movement, to work and to education, uprooting their trees, killing and wounding random innocents, imprisoning and arresting them without trial, bombing homes of civilians and entire cities etc. Israel not only violates and denies the basic human rights of the Palestinians such as the right of movement but also actively contravenes and neglects recognizing the norms of international law in relation to Palestinians.

Some Turkish universities are conducting conferences with Israeli universities or inviting Israeli academics to talk in Turkey. Turkish people, in particular academics and NGOs, should be aware of the danger of this kind of normalization, which destructively affects the future of the Palestinian people and their existence. Despite public knowledge of the role played by Israeli universities as part of the Israeli apartheid regime, even more Israeli educational institutions continue to empower and advocate for Israel's colonization project in Palestine. For example, the National Security Studies Center at the University of Haifa offers Graduate Studies in National Security and Strategic Studies, which has educated hundreds of high ranking and senior officers in the so-called Israeli Defense Forces.

One significant aspect in dealing with Israel would be for Turkey and the Turkish people to support and empower the Palestinians by helping the Palestinians counter their enemy. International solidarity is a powerful tool in raising awareness and bringing issues to the fore. This could be done, for instance, by boycotting Israel on all possible levels, especially economically and academically. The boycott challenges the Israeli apartheid regime and its racist policy toward the Palestinians on the global level. Despite the importance of boycotting the Israeli regime, there is still a lack of awareness in Turkey about the significance of boycotting Israel. So, Turkish NGOs can mobilize the Turkish people to boycott Israel in every aspect until Israel stops its discrimination and oppressive policy toward the Palestinians. To conclude, since Turkey presents a glimmer of hope for the Palestinians, the religious rhetoric and emotional discourses about Palestine in Turkey ought to advance toward more practical steps. These alternative approaches are more effective in empowering every aspect of the Palestinian cause while contributing to the weakening of the Israeli apartheid regime.