The democratic uprisings in the MENA and their aftermath 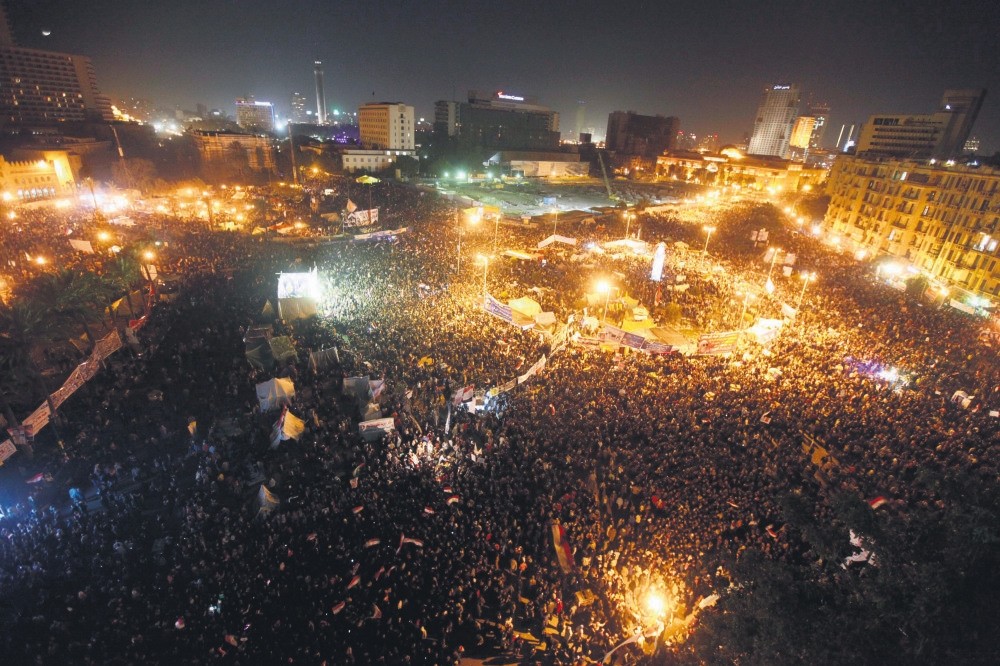 Demonstrators take part in a protest marking the first anniversary of Egypt's uprising in Tahrir square in Cairo, Jan.25, 2012.
by Mohammad Dawood Sofi Jan 23, 2019 12:00 am

The Middle East and North Africa (MENA) has become a hotbed of revolt, rebellion, and resentment for the masses who have felt disillusioned with the sociopolitical and economic situations for so long. It all started with Mohammad Bouazizi setting himself on fire, thus providing the much-needed spark that dramatically ignited and inaugurated the popular Arab Spring uprisings that disturbed the political situation, political culture, and security situation across the Arab world. The command and control of the autocrats experienced a heavy shudder because of these uprisings. Yet, the vigorous discussion and debate about the reasons and causes for these mass protests – coupled with the significance of social media tools, especially modern technology – hitherto searched and researched without rest by academics, experts, think tanks and analysts, remain critical. The reasons range from, among other things, social disorder and political deprivation, or the inept educational system and identity crisis.

Many analysts have linked these popular protests, which were organized, led, and sustained mainly by the youth, with several decades of socio-economic and political deprivation. The powerful dictators in the MENA region faced spontaneous but long in the making anti-government protests and dissent by "youth" who were largely disillusioned because of mounting unemployment and a discouraging political atmosphere.

'THE PEOPLE WANT TO OVERTHROW THE REGIME'

In professor Mahmood Monshipouri's view, today's youth in the Muslim world are more interested in jobs and freedom than the agenda of "Islamic" militants, of using violence to topple autocratic regimes. Indeed, these mass protests were largely apolitical and far from the influence of any particular group or ideology. The unifying slogan al-sha'ab al-sha'ab yuri'd isqāt al-nizām ("the people want to overthrow the regime") has for the first time, since the 1950s, powerfully captured the imagination of the people in the MENA region. Being free of religious iconography and vocabulary, the protesters, especially the youth, did not call in the name of Islam rather chanted "Erhal" ("Leave") or "Game Over."

THE DAWN OF A NEW ERA IN THE MENA REGION

For Monshipouri, although, it is early to say with certainty that it is the dawn of a new democratic era in the MENA region, specifically after witnessing the developments in Syria, Libya and Yemen. However, "it is evident that the digital protesters have shaken the foundation of the old order, enhancing the prospects for change toward democracy" and universal and inclusive notions of identity such as citizenship.

Social media and information and communication technologies (ICTs) are regarded as the important driving force behind the Arab revolts. Modern technology, for some who overly exaggerate its role, is the only tool capable of bringing social change. Whereas, for others, it is one of the critical tools effective in altering the status quo. Ostensibly, Monshipouri argues that social media and ICTs alone do not bring social change or make revolt possible. Without denying the significance of modern technology, he rightly maintains that the modern technologies "are crucial to organizing, instigating, and upholding nonviolent movements," nonetheless, it "alone lacks the necessary venom to put an end to authoritarianism."

Similarly, grievances – political, economic, or social – alone do not bring social change, rather for the revolution(s) to materialize an intensive collective effort is necessarily required. However, as a new form of protests embodying online activism, the internet and social media, gave the protesters a significant and effective platform to break their silence, generate a healthy discussion, give updates about new programs, mobilize the masses and organize protests. Social media, as has been rightly highlighted by one famous scholar, "gave substantive, symbolic and organizational force to the revolution."

The MENA protests and the Green Movement

Ironically, there are very few attempts that relate, connect, and find similarities between the Green Movement of Iran and the 2010/11 Uprisings in the MENA region. For instance, Ray Takeyh in his piece published in The Washington Post while trying to connect the two public protest movements asserts that the Green Movement was not so much a catalyst but rather a harbinger of the new momentous democratic uprisings in the MENA region.

In 2009, Iran witnessed a huge wave of social movement, known as the Green Movement – a solid opposition movement against the former President Ahmadinejad led by Mir Hossein Mousavi that arose after Iran's contested presidential elections.

However, the origins of the Green Movement are to be found in the mowj-e-sabz (the green wave). Prior to the 2009 presidential elections, the color green was visible everywhere in Iran including on the streets and cars, and large segments of the people and even websites of the Iranian bloggers were painted in green.

Besides containing deep cultural and religious underpinnings, many argue that the color green symbolized protest and dissent. Prompted by contested presidential election results and desire for freedom and expression, the protesters in Iran's Azadi Square or other places within the country and the protesters in Egypt's famous Tahrir Square or elsewhere demonstrated almost similar patterns, as both movements were fundamentally demanding legal and political reform.

On the other hand, between the lines, especially noteworthy is to understand the policy of the U.S. because it continues to play the most serious role of external actor and maritime power affecting and/or shaping the dynamics and destiny of the contemporary MENA region.

Historically speaking, the foreign policy of the U.S. toward the MENA region represented conflicting goals – supporting pro-Western and pro-American but authoritarian powers on the one hand and advocating democracy on the other; in other words, U.S. foreign policy navigated between consideration of geopolitical exigencies and the promotion of democracy.

For example, in Egypt, it promoted autocracy rather than democracy, especially during the reign of Hosni Mubarak. The U.S. harbored a similar set of patterns and policy vis-a-vis Tunisia and other countries. Some of the compulsions of the U.S. to support autocrats in the region were to keep away Islamic groups from power, protect its interests in the region, and safeguard its alliance with Israel.

Therefore, the power of the autocratic regimes were strengthened, expanded and reinforced with the U.S. support to better serve the strategic interests of the latter. However, in the midst of popular protests, the policy of the U.S. constantly shifted directions, overtly encouraging the masses and covertly seeking to maintain its ties with loyal allies in power. The U.S. supporting the protests in some places and opposing them elsewhere in fact depended on the size of the protests and who was ruling the country. Given the nature of its relations with Saudi Arabia, Bahrain, the United Arab Emirates (UAE) etc., it was unlikely for the U.S. to advocate regime change in such states.

While the U.S. has maintained cordial and close relations with most of the countries of the MENA region, its relationship with Iran in the post-1979 era, however, has been dominated by anger, hatred and suspicion. As a result, the U.S. has frequently clashed directly with the Islamic Republic of Iran over a number of issues, especially on the latter's preoccupation with Islamic law.

The enmity between Washington and Tehran

The rivalry between the U.S. and Iran, according to Monshipouri, is more political than technical or legal, following the Iranian Revolution and the fall of the monarchy. Whereas the U.S. heavily attempts to impose its sociopolitical and ethical-cultural norm globally, Iran places its geopolitical interests over and above the former's global external norms. Similarly, the U.S. lays emphasis on secular modernization, globalization and human rights; Iran insists on religious codes as a source of human dignity and gender identity and therefore places Islamic identity above such considerations. This already polarized relationship witnessed further exacerbation given the context of the nuclear dispute and other events. However, recently the bilateral relations between the U.S. and Iran have taken a new twist, possibly looking for some necessary concessions between the two realities.

In sum, the current U.S. foreign policy is largely concerned with and interested in maintaining the status quo and preserving contemporary power structures in the region. Its major objective, in doing so, is to maintain its power hierarchy in the region and beyond and secure its strategic goals and interests thereof. Therefore, it would do anything and everything to prevent others, especially China and Russia, from replacing or decreasing its influence or from becoming potential hegemons in the MENA region.