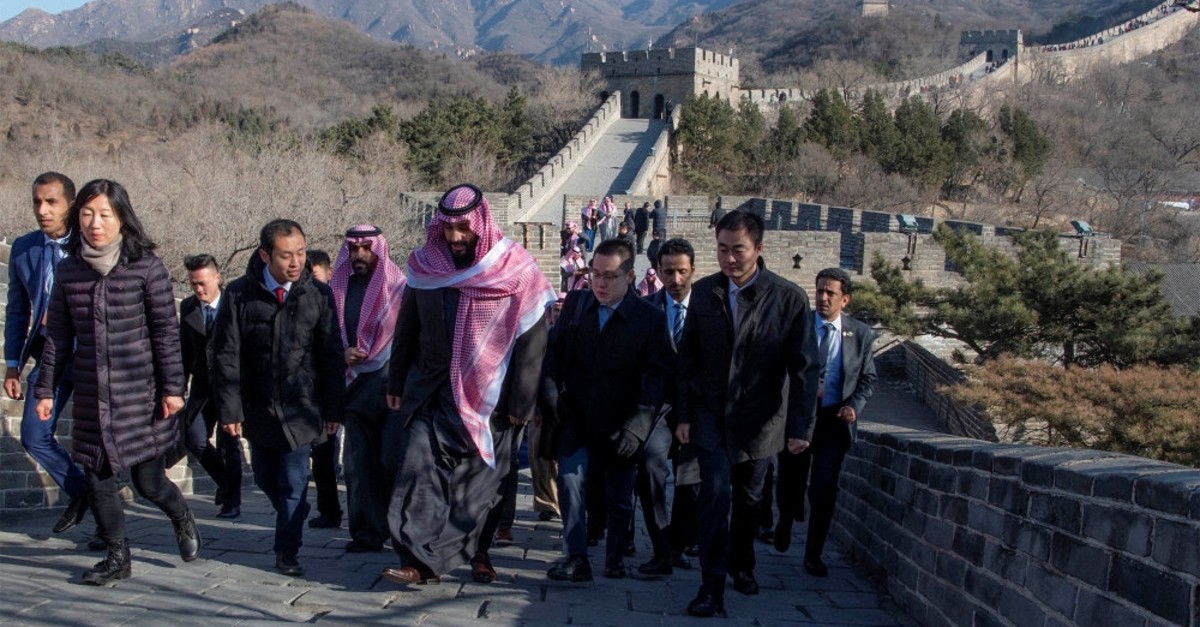 Saudi Arabia's Crown Prince Mohammed bin Salman walks with officials during his visit to the Great Wall of China in Beijing, Feb. 21, 2019.
by Omid Shokri Kalehsar Mar 01, 2019 12:47 am

The political and economic developments in the Middle East region are always at the forefront of the great world powers, and each power, using the leverage of political relations and investment, seeks to increase its presence and influence in the region using infrastructure projects to reduce the presence of competitors in this strategic region.

Major powers are always willing to have energy supplies from oil and gas producing countries, or if they can achieve it, they will prevent the control of energy sources and the routes of energy transit by rival powers.

China is now, and in the face of increasing economic growth since the 1980s, seeking to play an important role in global developments. The Middle East is one of the areas where Chinese politicians have been keen to import a significant part of the demand for oil from the Middle East. In order to increase its role, China has major projects such as the "One Belt, One Road" (OBOR) plan, which will increase the role of China in the regional and global balance of power. The new Silk Road plan is designed to invest in the infrastructure of more than 60 countries and the development of two commercial routes, the Silk Road Belt and the Silk Road of the Sea, which were presented by China in 2013.

Iran and Saudi Arabia as two main members of the Organization of Petroleum Exporting Countries (OPEC) have always had a special place in China's foreign policy. China has paid special attention to Iran and Saudi Arabia in the road and belt project. During Saudi Crown Prince Mohammed bin Salman's (MBS) recent visit to China, officials of the two countries emphasized strengthening relations between the two countries, strengthening the linkage between the two countries' development strategies, increasing the level of cooperation in the design of the OBOR and noted the willingness of the two countries to adopt a common policy on regional and global issues from other summits.

Before MBS's visit to China, Iranian Foreign Minister Javad Zarif, along with Iran's Minister of Petroleum Bijan Namdar Zanganeh and their Parliamentary Speaker Ali Larijani, went to China. Zarif wrote about the visit of the Iranian delegation to China on Twitter, which was the main topic of the talks between the two countries, as "Iran's role in creating a new silk road, as well as continued political, security and economic cooperation."

During the visit, Zarif and Zanganeh discussed the future of China's investment in South Pars Phase 11 as well as the continuation of China's oil imports from Iran. The China National Petroleum Corporation's (CNPC) withdrawal from South Pars has been a major concern for Iranian authorities, since Iran needs foreign capital and technology to increase its gas production capacity.

The Chinese authorities assured Iran that MBS's visit to China would not have any effect on Iran-China relations. Maintaining a balance in China's relations with Iran and Saudi Arabia is of particular importance to Chinese politicians, because its energy security depends to a large extent on the oil coming from these two countries. Another important point is Iran's influence on Shiite believers and Shiite groups in the region and the influence of Saudi Arabia on the Sunni block of the region has been, and remains, a concern of the Chinese government.

The policy pursued by the Chinese government against the Uighur minority should be arguably Saudi Arabia's objection. Last week, the Turkish Foreign Ministry spoke of the Turkish government's formal and strong stance on the Chinese government's detention camps for the Uighur minority. It should be noted that while China has over 1 million people from the Uighur Muslim minority held in forced labor camps, the preservation of good relations between Riyadh and Beijing and the quest for a greater presence in the Chinese energy market seems to have been more of a concern for the Saudi government. Because of this, it has been silent about China's policy towards the Uighur Muslim minority.

During the visit, MBS called for China to participate in the 2030 Arabian program. Saudi Arabia's 2030 program focuses more on renewable energy and reduces its dependence on oil exports. Saudi Arabia is leveraging investment to reduce Iran's role as its competitor. They have been using the energy market in India, and if they want to do so, will not lose sight of this leverage to reduce China's oil imports from Iran. Although Iran can also maintain its share in the Chinese oil market by offering special discounts to Chinese customers and also insurance on Iranian oil tankers. In previous years, Saudi Arabia has been demanding a boost to its European market by offering a discount to some Iranian oil customers. The competition between Iran and Saudi Arabia in the market for China's energy will surely be in the interest of China and bring the country the necessary oil under convenient and affordable conditions.

Saudi cartels have always been a favorite of Saudi officials. Saudi officials are ready to buy Chinese drills, Saudi Arabia's consumer market is a good destination for luxury goods and expensive Chinese companies, and Chinese companies want a more active presence in all commercial and infrastructure sectors of the country. Project 2030 presents an opportunity; it's a good place for Chinese companies, because Saudi Arabia's shadow boom does not threaten them. The U.S. sanctions have, despite the potential of all industrial sectors in Iran, prevented Chinese companies from investing in the current situation in Iran. As expected, Saudi Arabia and China signed a $10 billion energy deal during the crown prince's visit. Under this contract, the Aramco State Oil Company and China's Norinko Corporation have signed a $10 billion contract to build a refinery and a petrochemical complex in the city of Punjin in northeastern China.