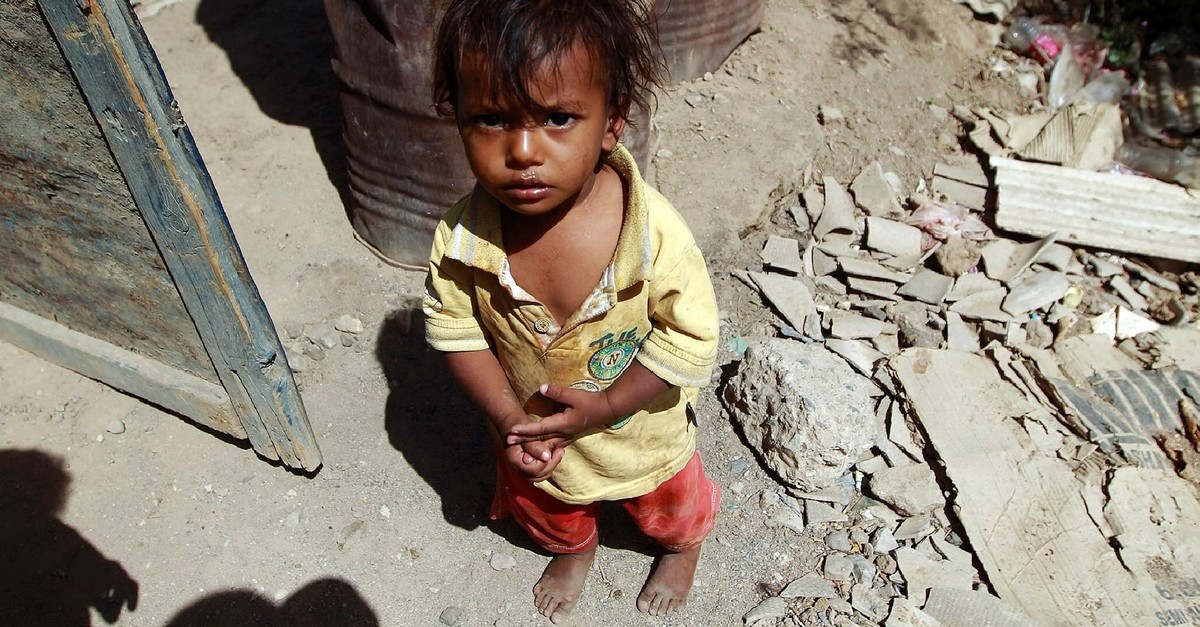 A Yemeni child displaced due to the tragic civil war in the country stands in the rubble of a building damaged by airstrikes in the capital Sanaa.
by Noofal Mohsen Basharahil * - Foyasal Khan ** Mar 04, 2019 1:14 am

Intervention of foreign countries, namely Saudi Arabia and the UAE, into the civil war in Yemen helps nothing but is heating up the war and creating a humanitarian crisis

The current population of Yemen is around 28 million people, of which 65 percent is Sunni and 35 percent is Shiite. The vast majority of Sunnis live in the south and southeastern parts of the country, while the northern part is dominated by the Shiite inhabitants (Zaidis).

Since 2011, the Republic of Yemen has been in a state of political crisis. This crisis began when a mass of people took to the streets to protest against poverty, unemployment, corruption, and the resignation of President Ali Abdullah Saleh. In face of the protests, President Saleh stepped down and Abdrabbuh Mansur Hadi was formally elected president on Feb. 21, 2012. In between this transitiona

l process, the central government was absent. Using this opportunity, the Houthis rebels of the Ansar-Allah militia and the al-Islah forces, as well as al-Qaida, got involved in a violent armed conflict.

In September 2014, the Houthis repaired their relationship with the former President Saleh and took control of the capital and much of the north. Since 2015, the Saudi Arabia and United Arab Emirates (UAE)-led coalition intervened in Yemen leading to the worst humanitarian crisis in the world. In December 2017, Saleh was shot dead in Sanaa resulted in a new civil war and a Saudi Arabian-led military intervention aimed at restoring Hadi's government. As of now, more than 60,000 civilians and combatants have been killed in armed violence in Yemen since January 2016. In this conflict, Malaysia's military involved under the Najib Razak (the former prime minister of Malaysia) administration, which was condemned by current Prime Minister Tun Dr. Mahathir bin Mohamad, the then opposition leader.

After the conflict in Yemen entered its fourth year on Saturday Feb. 23, 2019, the International Institute of Islamic Civilization & Malay World (ISTAC) of the International Islamic University Malaysia (IIUM) organized a symposium, "Stand with Yemen," in Taman Duta, Kuala Lumpur. In this symposium, Prime Minister Mahathir Mohamad clearly stated, "We will not take sides in big power rivalries, and neither will we rely on military alliances or strategic partnerships."

Through this he reaffirmed the country's non-interference policy. Malaysia decided to maintain distancing itself from the previous government's support for the Saudi-led military campaign. Instead Mahathir underlined that Muslim nations need to turn away from war and start working to uplift the socioeconomic well-being of all.

The symposium highlighted that the main crisis in Yemen is the product of three types of wars. Firstly, a war on terrorism led by the United States of America. Secondly, a proxy war between Saudi Arabia and Iran. The former wants to restore the regime of President Hadi while the latter supports the Houthi movement to turn against President Hadi. The last and the most important one is the civil war between north Yemen and south Yemen as result of the failure of the 1990 unity between the two countries. In this symposium, a number of issues were discussed from different points of view. However, we feel that the economic issue has not received much attention. In this short piece, we will focus on likely economic consequences of the civil war between north Yemen and south Yemen in the following lines.

South Yemen covers around 70 percent of the area of the Republic of Yemen with a population around 5 million, while north Yemen stands at 30 percent with a population of over 20 million. The civil war escalated in 2015 when the Houthis took control over the country because the political and military elites in northern Yemen felt that the south had intentions to return back to their country, which was independent before the unity of 1990. In 1994, Yemen experienced a civil war between the northern and southern parts and thus, the unity between them collapsed.

In 2015, the Houthis took the control of north Yemen without resistance and then they moved toward the south with strong support by the official army of Yemen which is controlled by the south since the war in 1994. This situation created strong resistance when the Arab Alliance led by Saudi Arabia gave military aid to the south. Thus, the south took back control of their country. This new scenario generated enormous hatred and enmity between northern and southern Yemen with regards to the control of economic resources when the majority of resources such as oil and gas was centralized in the south. Thus, the war turned into an economic wa

This unbalanced situation has made the Houthis incapable of meeting the government's responsibilities toward the people in the impoverished north. For instance, they have failed to pay the salaries of employees for more than two years and failed to provide energy to crucial sectors. Thus, the country is under a comprehensive economic paralysis. The Houthis have to use the majority of the resources to support their war against the official government. The economic situation in the south is in disarray because of the spread of corruption in the official government. In our opinion, the economic war that escalated in 2016 between the official government and the Houthis is the main cause stand behind this present humanitarian crisis.

Lastly, we would like to conclude by saying that Malaysia deserves special credit for holding this symposium at a time when the situation in Yemen is more complicated and the country is suffering a humanitarian catastrophe in terms of shortages of food, spread of massive poverty and violent conflict which has forced millions of families to flee to other parts of the world. Thus, we urge the members of the international community to extend their immediate help to protect the lives of approximately 22.2 million Yemeni people. Besides providing humanitarian assistance, Yemen is in need of political support to resolve the crisis of unity. With this, Yemen may be able to move toward a sustainable solution instead of temporary support that does not touch the root of the crisis.