Diplomacy is the only solution in Kashmir 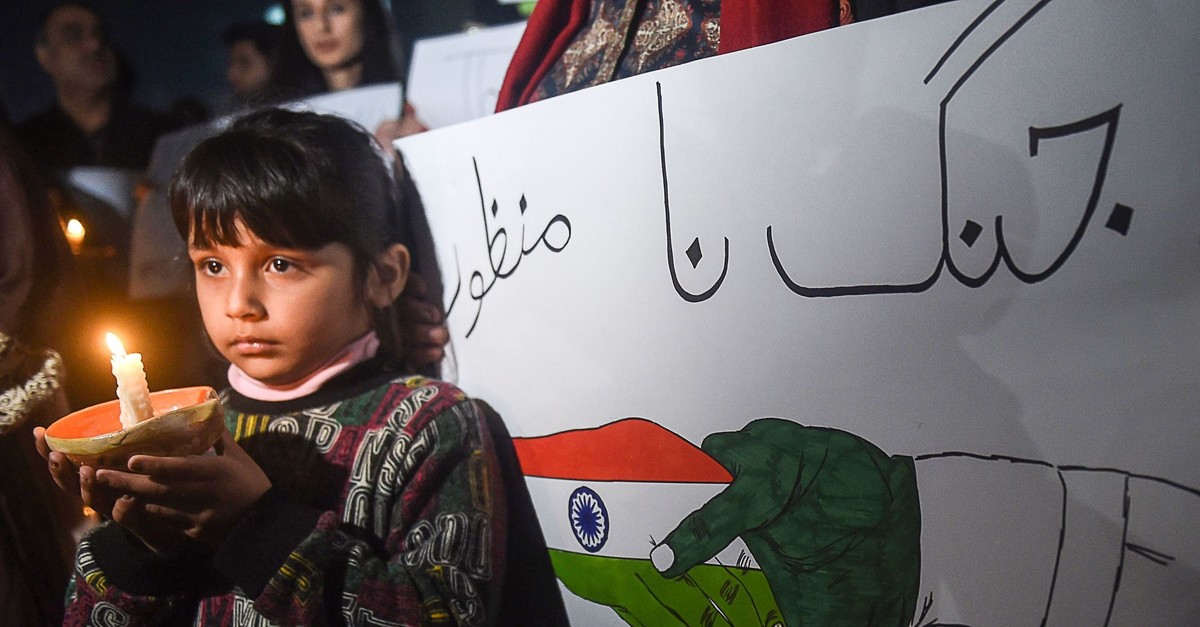 A Pakistani girl holds a lighted candle during a vigil for peace in Lahore; tensions have soared between India and Pakistan since a suicide bombing in Kashmir, March 3, 2019.
by Jaffar Hasnain Mar 11, 2019 12:02 am

As politics and power take center stage, Kashmiris continue to suffer with no end in sight, just like Palestinians, and more recently, Syrians

Whenever an attack takes places in Kashmir, the Indian government and media immediately accuse Pakistan of staging it, without providing appropriate evidence. Continuing the tradition of baseless accusations, the Indian government has re-established the terrorist narrative on Pakistan yet again by accusing it of carrying out the deadly Pulwama attack, which claimed the lives of over 40 Indian Central Police Force Reserve personnel. What the Indian media and government fail to recognize is the fact that their own intelligence and military have failed in bringing peace to Kashmir. Yes, every terrorist attack should be condemned no matter where and how it happened but blaming a sovereign state for every terrorist attack shows the incompetence of the Indian government in containing the violence in Indian occupied Kashmir. The unjustified accusations don't simply end here. Ever since the attack took place, the Indian media has started warmongering by inviting biased, anti-Pakistan guests on talk shows, misleading the Indian citizens, framing false facts upon the credibility of Pakistan, and calling for more violence in Indian-occupied Kashmir.

Talking about facts, the Indian government is accused of grave human rights violations in the region. The United Nations has condemned the routine clashes and use of force by the Indian military towards Kashmiris on multiple occasions. Despite the outcry from the international community and human rights groups, the Indian military continues its regime of brutality against innocent Kashmiris. Last year, a two-year-old Hiba Jan became the youngest victim of the Indian pellet guns used in Indian-occupied Kashmir.

The solution to this perplexing issue cannot be a war between two nuclear powers. By using a harsh rhetoric, India is not only risking the lives of millions of innocent Indians and Pakistanis, but also putting the world in grave danger of a nuclear catastrophe. The severe atrocities witnessed during World War II have embedded in our memory that such steps could lead to problems that may have no ultimate ends. The conflict between India and Pakistan needs a diplomatic dialogue based on comprehensive solutions that benefit all of the stakeholders involved. The idea of a military advance cannot be brought forward to resolve years of oppression and instability.

Loss of life and terrorism justified by any ideology should be strongly condemned no matter who is involved but playing a blame game over sensitive issues is not suitable to a country like India.

As politics and power take center stage, Kashmiris continue to suffer with no end in sight, just like Palestinians, and more recently, Syrians.

* Anchor at A News TV channel, based in Istanbul