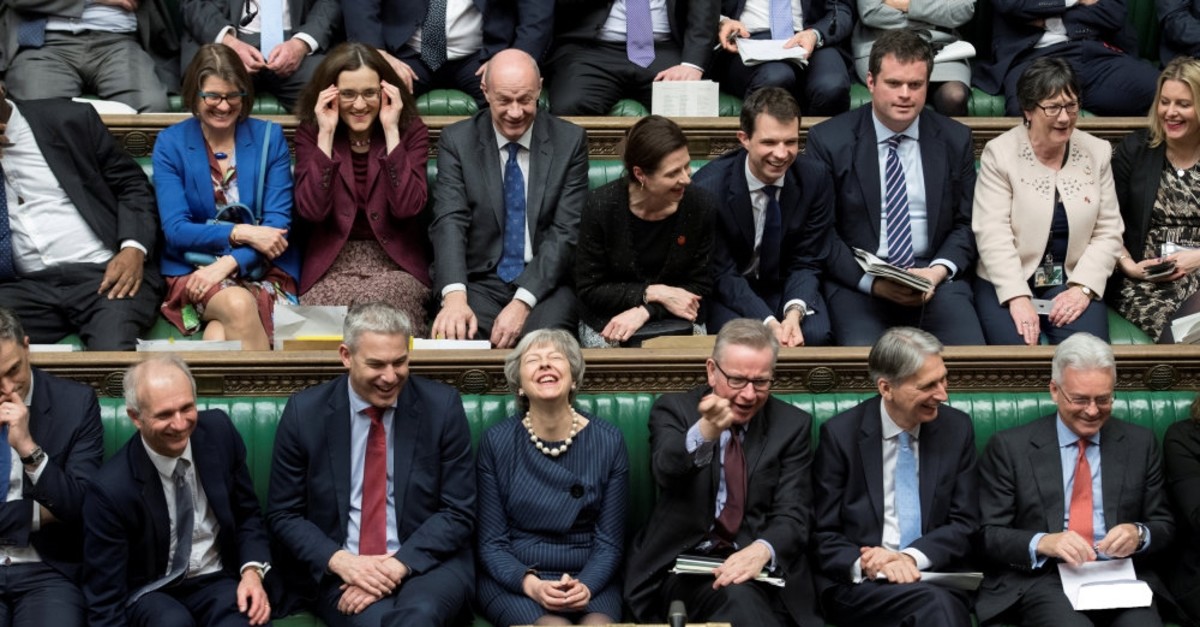 Britain's Prime Minister Theresa May reacts during the debate on extending the Brexit negotiating period in Parliament in London, March 14, 2019.
by Jurgens Klaus Mar 16, 2019 12:53 am

Here in London, in what has been labeled as Brexit decision week – yes, another – one must admit that it will indeed be remembered in British history as extraordinary. Let us briefly sum up events before analyzing its impacts on both sides of the English Channel.

First, on Tuesday British Prime Minister Theresa May lost her Withdrawal Agreement re-run vote; second, various groups of different political colors lost their motion for a "No Deal Brexit" on March 13 as well. And third, on Thursday a number of amendments, some even amendments to amendments, were voted upon in the House of Commons with the most important outcome being that May's government now has an option to request an extension of the exiting deadline yet no longer than June 30 from the European Council meeting next week.

Were this not enough of a drama behind the scenes, these three days will be discussed in Westminster and beyond for years to come. Let us here only mention one such noteworthy development to underline the seriousness of the division in the House of Commons: Brexit Secretary Stephen Barclay was one of seven Cabinet ministers who voted against their very own government's delaying Brexit motion, no peccadillo by all standards.

The ayes have it; or do they?

Outside Parliament the mood was clearly influenced by the strong winds and permanent rainstorms. It was an all but fitting backdrop for what many in the United Kingdom (and in continental Europe, too) would label as a grim, depressive Brexit bandwagon trundling along without any clear direction.

Members of the public engaged in ever more vociferous defending of their either/or opinion while members of the reporting media resorted to basically only suggesting what could happen next yet with few actually being certain about the next movements inside the House of Commons.

The re-run of Prime Minister Theresa May's Withdrawal Agreement on Tuesday was defeated by 391 votes against with 242 in favor. It was expected, as last-minute legal advice presented to Parliament focused on the fact that May's last-minute evening flight to Strasbourg on Monday to meet with EU Commission President Jean-Claude Juncker had not led to any significant change in how the infamous Backstop could be modified.

As had been proposed by the Prime Minister the next day Parliament had a chance to ask for a No-Deal Brexit, yet this was voted down, too. Back to square one, observers felt inclined to say as only one scenario remained on the table: asking for a delay.

And on Thursday this exactly happened. With voting starting shortly after 5 p.m. local time, various options were put to the MPs, including one that said the UK should ask for a second referendum should an extension being denied. With that amendment being defeated, too, finally Parliament agreed on something instead of saying what it does not want: 412 votes in favor and 202 against meant that Theresa May now can ask Brussels to grant a Brexit extension up until June 30. That ball is no longer in London's court, however, as it is the remaining 27 EU member states that must agree in unanimity whether to say "yes" or perhaps "no."

A surprise still possible for May

As strange as it may sound, it appears on Friday morning that Theresa May would be able to actually win the upper hand, at least to a certain extent. Let us clarify possibilities, written with all required Brexit hesitation before committing to any firm commentary.

May now has a whole weekend to sound out her own divided Conservative Party plus the Northern Irish Democratic Unionist Party (DUP) with guarantees by her otherwise minority government. She could meet with Jeremy Corbyn from the Labour opposition, too. By Wednesday she must pack her bags and head off to the EU again to ask Brussels for the extension voted on in Westminster yesterday.

But she could do something even more risky: present parliament yet one more Withdrawal Agreement text before close of business on Wednesday. Why would she do that?

With few options left intact, it all boils down to accepting Theresa May's deal or going for the extension yet with a risk that Brussels prefers a longer extension well beyond the May European Parliament elections. Brexiteers on all sides of the House (yes indeed, there are Brexiteers on both sides of the House as we know by now) fear that if Brussels only accepts a longer extension, Brexit would be totally watered down or in the worst case, called off completely. As Parliament in principle said it wants no "No Deal" – Brexit chances are that in a last second attempt her government has just enough of a majority to pull that off.

Hence, Theresa May is trapped in between pulling it off and calling it off someplace down the Brexit line.

What is the risk involved in this undertaking? The risk is what would happen if Parliament rejects her deal a third time. She would travel to the EU Council Meeting with almost empty hands except for her one question: Please grant us an extension until June 30. Brussels might just as well say "no" as with what justification could May support her claims? How could a parliament that hasn't so far managed to find a compromise so far do so with another three months?

Should May table her deal a third time and it goes through, Brexit still takes place on March 29 as is written in statutory law.

Should May go to Brussels and return with whatever new political declaration add-ons chances are that Parliament votes on Brexit the day before March 29, and the UK still leaves in an orderly manner with using the word "orderly" perhaps being exactly the opposite of what one would associate with it… Should the EU grant that extension until June 30, May could run down the clock again and present her deal closer to the month of June, hoping for the best!

If at any moment during the extension period, the opposition Labour Party asks for a no-confidence vote, early elections are also on the cards before June 30. A new government may have a completely different view on all things Brexit.

Uncertainty all around and after what historians may later on call a significant week in British politics, what is certain though is that both members of the public and members of the House and even with an extension should try and find compromise. Britain is completely divided, highly polarized. Demonstrations on either side have remained peaceful for the time being, but judging by the aggravated state of many demonstrators camping outside Westminster this past week emotions might boil over at any minute.

Did the Brexit process do any good to British society as was promised by its campaigners? Will Brexit be good for British society once it finally ticks off? From a windswept observation post just outside the House of Commons one feels inclined to say we shall wait and see as a clear answer with a resounding "yes, it does and will continue to do so" is unfortunately not an option for the time being.