White supremacism has turned into terrorism 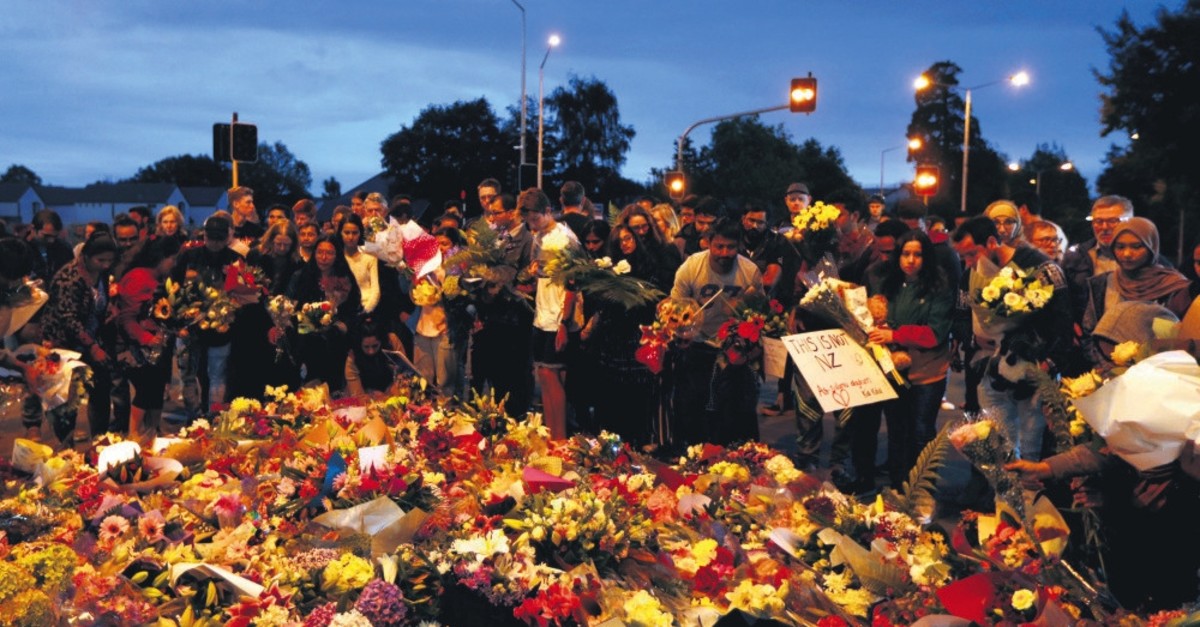 People place the flowers in tribute to the victims of the terrorist attacks against two mosques in Christchurch, New Zealand, March 17, 2019.
by Esra Karataş Alpay Mar 18, 2019 12:09 am

The New Zealand mosque attack has revealed a solid reality; white supremacism is another kind of deadly terrorism that spreads fear and targets innocent people in all societies

A tragic terrorist attack took place in two mosques in the peaceful city of Christchurch, New Zealand. Worshiping Muslims had gathered for Friday prayers and were listening to the imam's sermon. The worshipers at one of the mosques were attacked by a well-armed terrorist who had arrived with an automatic weapon to cause maximum damage. The terrorist filmed his own actions with a camera mounted on his head and livestreamed himself throughout the whole massacre on social media. Some 49 people were murdered in cold blood and more than 20 others were seriously injured in front of a social media audience online. Hence, the video was shared repetitively for all to see.

It seemed as if the terrorist was playing a video game; however, he was shooting human beings that fell down as mere corpses. We, the audience watched a surreal horror movie, unable to comprehend the amount of violence. The terrorist was obviously well-prepared with his military gear, artillery and uniform. He had calculated every detail as he marched inside the mosque to shoot unaware worshipers, caught totally off-guard. A mosque is considered to be a house of God and a holy place of worship for Muslims as they gather to worship in peace, harmony and respect for one another. The idea of an armed terrorist walking in and attacking them as they perform their duties is unimaginable.

One of New Zealand's darkest daysNew Zealand Prime Minister Jacinda Ardern gave a public statement on television, "This is one of New Zealand's darkest days. Clearly what has happened here is an extraordinary and unprecedented act of violence. Many of those who will have been directly affected by this shooting may be migrants to New Zealand, they may even be refugees here. They have chosen to make New Zealand their home, and it is their home. They are us. The person who has perpetuated this violence against us is not. They have no place in New Zealand. There is no place in New Zealand for such acts of extreme and unprecedented violence, which is clear this act was."

The prime minister's compassionate speech was welcomed by the shocked Muslim community, which has been scared far too many times. However, this terrorist attack does not seem like a random outrage carried out by a single person but rather it happens to be a by-product of the everyday racism and anti-Muslim used and repetitively legitimized by the media and right-wing politicians. Many right-wing politicians have openly vilified and targeted immigrants and refugees – blaming them for their own failing policies and shortcomings. The use of social media is another form of violence, used by the terrorist to spread fear and broadcast his terrorist attacks, so as to give courage to other terrorists.

The terrorist published a 74-page manifesto that identified him as a 28-year-old Australian, Brenton Tarrant, of Scottish and Irish descent. He states that his motives were to spread his extremist ideology of white supremacy. There are disturbing messages and unfortunate role models of white-supremacists.

There is a part written directly to the president of Turkey, as he threatens and warns him. "Erdoğan, the leader of one of the oldest enemies of our people, and the leader of the largest Islamic group within Europe. This warlord must bleed his last, whilst he visits his ethnic soldiers currently occupying Europe. His death will also drive a wedge between the Turk invaders currently occupying our lands and the ethnic European people whilst simultaneously weakening Turkey's hold on the region, removing a prime enemy of Russia and destabilizing and fracturing NATO."

There is a whole page written "To Turks." The manifesto reads: "You can live in peace in your own lands, and may no harm come to you. On the east side of the Bosporus. But if you attempt to live in European lands, anywhere west of the Bosporus. We will kill you and drive you roaches from our lands. We are coming for Constantinople and we will destroy every mosque and minaret in the city. The Hagia Sophia will be free of minarets and Constantinople will be rightfully Christian owned once more. Flee to your own lands, while you still have the chance."

There are words and letters hand written and inscribed on the terrorist's automatic machine gun which all have symbolic meanings referring to historic events in relation to the Christian crusades and Christian ideological supremacist murderers that have obviously been deemed as heroes for this terrorist.

"Refugees Welcome to Hell" was written on the gun and could be clearly visible near the tip. The name "Alexandre Bissonnette" written near the gun's grip could also be clearly read. He is the terrorist who attacked a mosque in Canada in 2017 and killed six worshiping Muslims. The name "Anton Lundin Pettersson" is a European murderer who killed two migrant children in Sweden. The numbers "1683" symbolizes the year 1683, the date of Vienna's second siege by the Ottoman Empire. "Antonio Bragadin" is a Venetian military officer who broke his pact/agreement and murdered his Turkish captives. "Skanderberg" was a Christian Albanian leader who fought against the Ottoman Empire. "Charles Martel" was a Christian Frankish leader who defeated the Muslims in Andalusia at the battle of Tours.

The terrorist was caught by the police. Hopefully tightened security measures may prevent any more possible future terrorist attacks and New Zealand can return to the tolerant society that it once was. On the other hand, Sen. Fraser Anning for Queensland, Australia published a controversial document titled "New Zealand Mosque Shooting," where he implies that Islam, Muslims and immigrants may be the cause for terrorist attacks.

May these cruel acts of hate, murder, genocide and massacres never be repeated ever again, anywhere on earth, as we are reminded that terrorism has no religion. International measures must be taken to prevent politicians from being able to use hate speech freely and condemning religious and ethnic segments of society. The world is waiting to see leaders unite and condemn the terrorist attacks against Islam and Muslims worldwide.