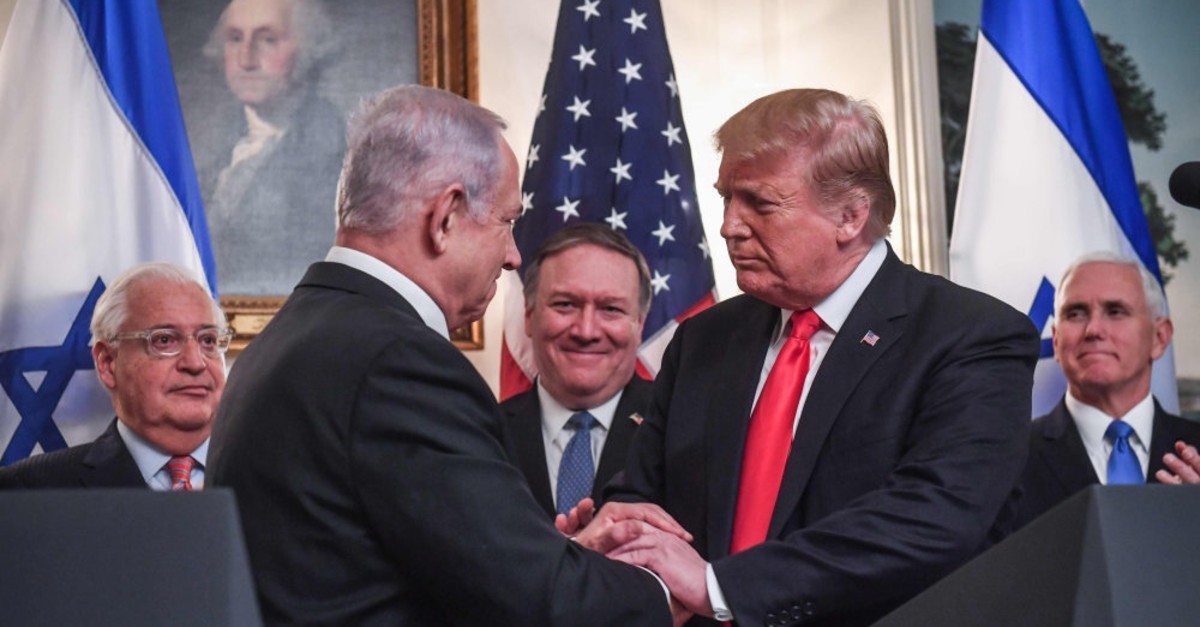 As Erdoğan said, Trump's statement on the Golan Heights was a free gift to Netanyahu ahead of elections. That's something Turkey, Russia and China cannot accept

In his recent visit to the Middle East,U.S. Secretary of State Mike Pompeo agreed that "Donald Trump may have been sent by God to save Jews from Iran." When he was asked whether "Trump was just like Queen Esther, sent to save the Jewish people from the Iranian menace," Pompeo replied, "As a Christian, I certainly believe that's possible." Does Pompeo's answer echo his beliefs or was it merely to boost Netanyahu's re-election campaign?

One of the indispensable foundations of the U.S. Middle East strategy is to sustain the superiority of Israel. There is no doubt that Trump is fully committed not only to Israel's survival but also to its superiority and leadership position in the Middle East. Though he rhetorically tried to maintain a broker's neutrality in the Arab-Israeli conflict, all his actions and policies toward the region are in line with his indubitable support to Israel. His standpoint is fully in agreement with his objective which states that the U.S. stands copiously with its "true" friends and Israel is the truest and closest. In a cynical political gambit, Donald Trump signed a presidential decree last Monday, ceremoniously acknowledging Israel's dominion over the occupied Golan Heights.

Obviously, the timing of Trump's proclamation boosts Netanyahu's electoral campaign. The declaration comes at the time Netanyahu's despondency is blatant in his desperate and obsolete political discourse that attempts to cover up corruption scandals. Netanyahu's inability to settle pending security problems with the Gaza Strip and his failure to finish the case of his captured soldiers in the besieged enclave obstructs his smooth success in the coming election.

Thus, a visit to his close ally in Washington would show Netanyahu's political wit in international diplomacy. There is no doubt that Netanyahu has achieved major inroads in normalizing relationships with Arab states and Gulf monarchies. His breakthroughs in boosting economic and political ties with the African continent are undeniable. Taking advantage of the mounting "Iranophobia" among the Gulf States, Netanyahu succeeded to persuade them that Israel is their indispensable ally and Iran is the lurking enemy. He relatively succeeded, but his chronic headache is still intact. At the time Trump was signing his proclamation of Israel's sovereignty over the Golan Heights, a rocket landed in Tel Aviv, the furthest distance a rocket has been fired into Israel since the 2014 war fought between Israel and Hamas. The rocket inflicted tangible damage to property and seven Israelis were wounded. Israeli air forces launched strikes against civilian properties in the Gaza Strip in return.

The Israeli newspaper Haaretz leaked reports about an unannounced meeting that took place on Feb. 21, 2016 between Egyptian coup leader and President Abdel-Fattah el-Sissi, Jordanian King Abdullah II, Israeli Prime Minister Benjamin Netanyahu and former U.S. Secretary of State John Kerry. The alleged report manifests the level of readiness with which the regimes in Cairo and in Amman are cooperating to finalize a regional settlement to the Palestinian cause. Under Trump, the entire Palestinian political and economic structure, which was originally set up on the Oslo Accords that promised the Palestinians a viable Palestinian state, seems to be dispelled. The illusion of the two-state solution is waning and the reinstating of a one-state solution or rather a one-state hegemony is superseding it. Almost every U.S. president campaigned on colossal promises to Israel, including the relocation of the American Embassy from Tel Aviv to Jerusalem. However, later they all signed the waiver stipulated in the 1995 law draft to keep the U.S. Embassy in Tel Aviv. Trump also pledged during his campaign to move the embassy from Tel Aviv to Jerusalem. Unlike his predecessors, in December 2017, Trump delivered on his promise and formally recognized Jerusalem as Israel's capital, and approved moving the U.S. Embassy. It was opened in May 2018 to coincide with Israel's 70th anniversary.

Trump's decision provoked resentment among Muslims, but the Arab and Muslim formal reaction was null. As a businessman, Trump is then tempted to capitalize on his "return on investment" by pleasing the American Israeli Public Action Committee (AIPAC) and his ally in Israel, Benjamin Netanyahu, days before the Israeli election. The Arab countries seem to have utterly endorsed Trump's standpoints on Israeli-Palestinian peace. Their current stance vis-à-vis Trump's proclamation regarding the Golan Heights shows that their reaction will not exceed verbal condemnation if any. Though Arabs do not enjoy too much in common, Israel and the Arab states have recently shown that they have grown closer over common attitudes vis-à-vis Iranian threats. The 2002 Arab initiative that outlined Arabs willingness to totally normalize relations with Israel could be entirely dissipated. The public statements of the Arab leaders unequivocally signal that Trump does not need to bring serious pressure on them to liquidate the Palestinian cause and the occupied Golan Heights in favor of his true ally, Israel.

Why the Golan Heights?

Among Syrians and Arab citizens there is a widespread belief that the Golan Heights were abandoned and even sold by the Syrian regime in the 1967 war by the then-Defense Minister Hafez Assad, in return for covert Israeli support for him to later lead the Syrian regime and become president in 1971. The Golan Heights is a region in the Levant nested between four countries (Syria, Lebanon, Jordan and Israel's occupied Palestinian territories) it spans about 1,800 square kilometers. It supplies Israel with one-third of its water needs.

The region's geopolitical importance makes Israel challenge all international conventions that don't recognize Israel's annexation of the region. All direct and indirect negotiations between Israel and the Syrian regime end up in failure. In 2008, Israel and Syria had begun an open dialogue with the aim of comprehensive peace under the patronage of Turkey but it also failed after Israel's war on Gaza in 2008.

Although Turkey is not on good terms with the Syrian regime of Bashar Assad, President Erdoğan staunchly reproached Trump's decision. Immediately after Trump's proclamation, Turkey's president said that Turkey will take the issue of the Israel-occupied Golan Heights to the United Nations. Erdoğan said U.S. President Donald Trump's statement on the Golan Heights was a free gift to Israeli Prime Minister Benjamin Netanyahu ahead of elections. That's something Turkey, Russia and China cannot accept. Now, are Trump's endless initiatives toward Israel merely to boost Netanyahu's re-election campaign? Or is he walking hand-in-hand with Netanyahu toward realizing the dream of the Zionists? Or maybe are they both moving in the wrong direction of history by challenging the will of the nations of the region and completely disregarding the consequences of such reckless decisions.