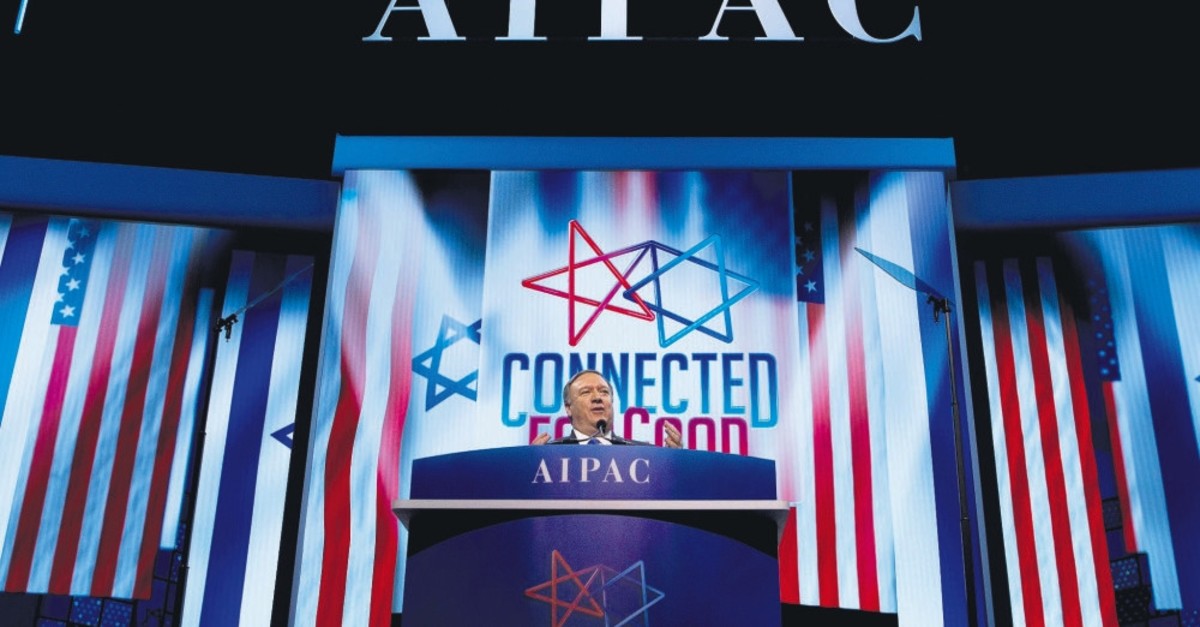 AIPAC relies heavily on U.S. mainstream media for the dissemination of Israel's narrative and for perception management by omitting daily human rights violations that the Israeli Defense Forces commit against Palestinians

Despite the 18,000 faithful who came the past weekend to pledge their unwavering support to Israel, the American Israeli Public Affairs Committee (AIPAC) finds itself in a Dickensian moment of history that could be retrospectively described as: "It was the best of times; it was the worst of times" or it was the winter of gloating; it was the spring of scrutiny.

AIPAC's guests of honor may vary in faiths and political affiliations; they may vary in fame, clout and the sizes of their wallets. But on certain characteristics they are all identical: Their cultish faithfulness in the mentality of "what's good for Israel is good for America," and in their adherence to disseminate the committee's talking points on foreign policy ad nauseam.

After seven decades of statehood, Israel remains unsustainable without billions of U.S. taxpayers' money, without the U.S.' blind commitment to veto any resolution that attempts to hold Israel accountable for the routine human rights violations and transgressions against international laws – something that ironically would have justified "regime change" if it were another country doing it.

Over the years, AIPAC has successfully marketed Israel as a logical cognitive dissonance. Although the 2019 Global Firepower report ranks Israel the 16th most powerful military in the world, it is presented in the U.S. as a nation that is under existential threat. Though it is a wealthy, innovative, and advanced nation, it is presented as a nation that is worthy of perpetual and unconditional funding from American taxpayers.

Looking through the stained glass

Following Israel's 70th anniversary, these three controversial AIPAC lobbied-issues came to fruition: Termination of the Iran Nuclear Deal, transfer of the U.S. Embassy to Jerusalem, and getting the U.S. to recognize the Golan Heights as part of Israel; hence underscoring the AIPAC's exceptional clout in driving U.S. foreign policy. The only outstanding item in Israel's wish-list is to declare the remnants of the Muslim Brotherhood, most of whom are in the dungeons of Egypt, a terrorist organization. Surely these accomplishments could boost Israeli Prime Minister Benjamin Netanyahu and U.S. President Donald Trump's image – something they both desperately need as a specter of corruption charges looms.

That being said, despite the common perception, America, save former President Carter, has never been an "honest broker" in its effort to help negotiate peace between Israel and Palestine. And that duplicitous brokerage is now on steroids. Unlike previous U.S. envoys to the Middle East who diplomatically concealed their staunch support of above-all-laws Zionism, Trump's son-in-law Jarod Kushner who is now piloting the U.S.' Middle East policy, seems to enjoy being closely affiliated with Netanyahu and the extreme elements of Israel politics.

The 'missing in action' media

AIPAC relies heavily on U.S. mainstream media for the dissemination of Israel's narrative and for perception management by omitting daily human rights violations that the Israeli Defense Forces (IDF) commit against Palestinians, including children. So it should shock no one to see media groups that would assign reporters to file stories from dangerous war zones would never send reporters to educate American audiences on what happens at military checkpoints or about the unbearable living conditions in the Gaza Strip.

Generally speaking, in democracies, media provides some of the most critical public services – information, scrutiny and empowerment. Without them, average citizens will remain ignorant or ill-informed, therefore easily exploitable socially, politically and economically, and those whom power is entrusted with will grow more authoritarian and abusive, with impunity.

By the same token when the media surrender their journalistic independence to the highest corporate or individual mogul bidders, they, in due course, grow dysfunctional and lose sight of their role to advance the public interest and keep power in check. In such conditions, the media becomes a dangerous tool.

According to the Gallup media surveys, older Americans are more likely to trust the media than younger Americans. In the latest survey, 53 percent of those aged 65 and older trusted the media, compared with just 33 percent of those under the age 30, and this demographic perceptional enlightenment is the biggest revolution against fictional narratives that cannot withstand the smell test. That revolution is not only active in social media; it has real presence in the U.S. Congress. And this presence is more profound than Adam Milstein, a major pro-Israel funder's, anti-Islam claim that "The Muslim Brotherhood is now part of Congress" in reference to Muslim Congresswomen Ilhan Omar and Rashida Tlaib or President Trump's reckless posting of a propagandistic video implicating Omar as a terrorist sympathizer. Since then, death threats against Omar have alarmingly increased.

Trump's tweet that set the stage for the U.S.' formal recognition of the Golan Heights as part of Israel, posted the day before the Special Counsel Robert Mueller turned in his final report on the Russia Investigation. Of course, this latest of many "Trumplomacy" adventures has very little, if any, to do with U.S. national interest.

Trump's violation of the international law that considers the Golan Heights as occupied territory was meant to give another troubled leader, Prime Minister Netanyahu, who is AIPAC's first choice, a boost in the upcoming election. This blind loyalty to Israel's grand objective in the Middle East would further alienate and shut out any opportunity to reconcile with the Muslim streets that are fed up with the despotic older guards such as Egypt's President Abdel-Fattah el-Sissi and the more youthful perilous pawns such as Saudi Arabia's Crown Prince Mohammed bin Salman. This reckless decision endorses the "might is right" worldview, re-inspires irredentism and intensifies the sporadic disorders already underway in many parts of the world. It undermines the U.S.' geopolitical interests in the long term. Most of the credit goes to AIPAC.

Before AIPAC came to the scene the Jewish Zionist Council used to do the heavy lifting when it came to lobbying for Israel. Under the Kennedy administration, Attorney General Robert Kennedy launched an investigation that later found out that the Council had "compromised its position" thus ordering it to register as a "foreign agent." The Council never registered. It was voluntarily dissolved, and, in the late 1960s, AIPAC whose mission is "to strengthen, protect and promote the U.S.-Israel relationship in ways that enhance the security of the United States and Israel" assumed its functions.

Due to the blurred line of U.S. national interest and AIPAC's emboldened status under the current administration, it is a matter of time before the new generation in the House would demand hearings citing the 1962-63 investigation as a precedent.

This year's de facto conference theme was "Let's gang up on Ilhan, shall we?" Led by Israel's Prime Minister Benjamin Netanyahu who told the conference "take it from this Benjamin, it's not about the Benjamins," it is about Israel's shared values with the U.S., he added. This assertion might persuade anyone who is oblivious to or ignores the fact that the United Kingdom is the closest to the U.S. when it comes to shared values, history, fighting side-by-side in major wars and a strategic partnership that ensures each a robust support for the other. But, everyone knows no politician who knows a thing or two about international relations could claim that the U.K. and America will be friends forever. Yet, "Israel and America are connected now and forever," said Speaker Pelosi.

AIPAC has been having a rough time spinning any and all legitimate criticism of Israel's ruthless oppression of the Palestinian people as an ill-intentioned anti-Semitic attack on all Jews, though many of the most antagonistic toward that apartheid-like system are thoughtful Jews, Jewish human rights and peace-promoting organizations.

The United Nations has recently issued a report blaming the Israeli army for the cold-blooded killings of 189 unarmed Palestinians that included 35 children and some journalists and first aid workers, and maiming more than 9,000 during last year's "Right of Return" protests in Gaza. The report which was based on more than 300 interviews and more than 8,000 documents concludes that Israel may have committed crimes against humanity. With these kinds of crimes and Netanyahu's Likud Party forming a partnership with a zealot party that promotes the forced removal of Palestinians has compelled many including 2020 presidential candidates such as Sen. Bernie Sanders and Sen. Kamala Harris to boycott attending the conference. President Trump did not waste time in condemning their decision to not pay their loyalty homage as an anti-Israel stance.

Many halls are pocketed in AIPAC's "carrot or stick" groupthink power that had total monopoly on the Middle East narrative and the future of the Palestinian people. Just don't tell those diehard AIPAC loyalists who were at the conference about it.When groupthink rouses the masses into disorder it is a tragedy. And when groupthink rouses the political, economic, social and the intellectual elites to surrender their autonomy to think critically and independently, it is a tragic comedy.

* Former diplomat who frequently writes on foreign policy and geopolitics in the Horn of Africa, and Islam