The Golan Heights factor and the future of destabilized Syria 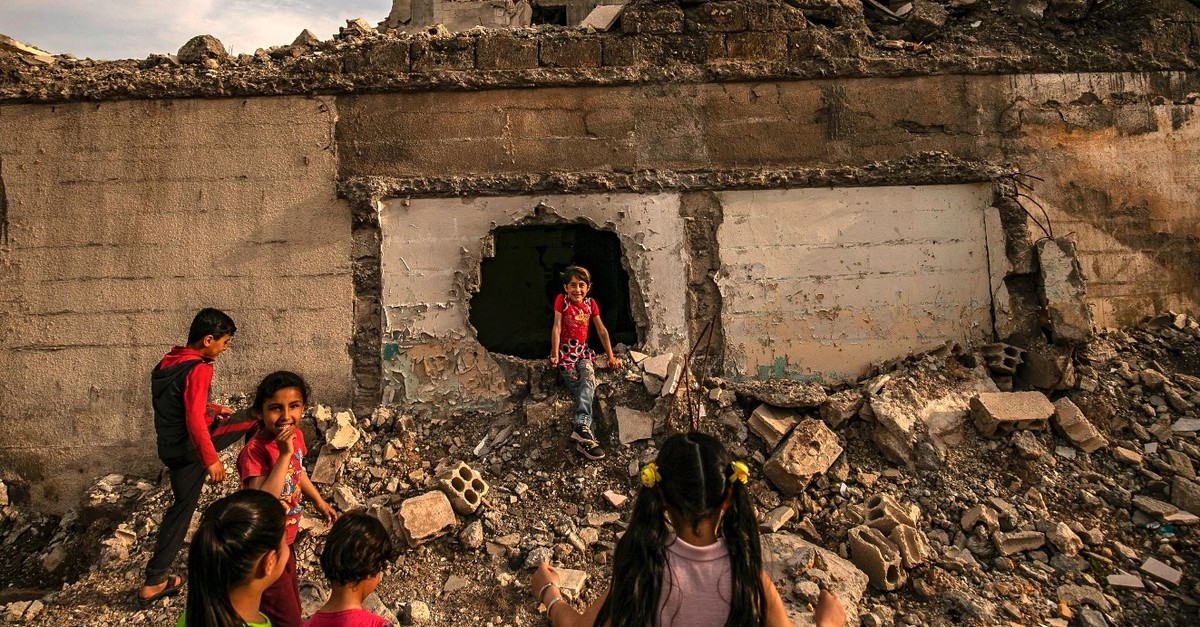 The Trump administration's controversial decisions in the Middle East are fueling regional conflicts, which indirectly lead to further the destabilization of war-torn Syria as well

Donald Trump's statement on March 21 that the time has come for the U.S. to "fully recognize" Israeli sovereignty over the Golan Heights, the territory Israel seized from Syria in 1967, has generated public outcry, frustration and bewilderment. A surprise present for Benjamin Netanyahu on the eve of the highly contested parliamentary elections, the U.S. move doesn't have the potential to change the legal status of an "occupied territory" recognized by the U.N. Still, it gave Prime Minister Netanyahu a needed boost and won him the next term in office, the fifth successive time. The intention to proceed with construction of illegal settlements on the Golan Heights was the core of the Netanyahu's election campaign and he gained greatly from Trump's unexpected statement.

Moved and happy, the newly elected prime minister has made a pledge to "bring to the government a resolution calling for a new community on the Golan Heights named after President Donald J. Trump" as soon as Passover festivities are over, while adding that "all the Israelis were deeply moved by Trump's historic decision."

The reaction of the world community to the U.S. president's decision was quite different. It was immediately condemned by different countries, including Turkey, as unilateral and prone to negatively impact the situation in the Middle East. In a joint statement on April 26, the Astana peace talks guarantor countries Turkey, Russia and Iran denounced the U.S. move to recognize the Golan Heights belonging to Israel and reaffirmed their respect for "sovereignty, independence, unity and territorial integrity of the Syrian Arab republic and to the purposes and principles of the U.N. charter." In the course of its summit on March 31, the Arab League condemned Trump's decision, stating, "We declare once again our refusal to accept any decision taking that could undermine Syria's sovereignty and contest the status of the Golan Heights as an integral part of the Syrian territory."

These days, the U.S. foreign policy often brings surprise and short-sighted decisions prone with dire impact on the sensitive international matters. The most recent is the U.S. refusal to grant further waivers to Turkey, Japan, India, China, Italy, Greece, Taiwan and South Korea on the import of Iranian oil that triggered the world crude price increase of 2.5 percent just on the first day. Trump's decision has frustrated Turkey and made Foreign Minister Çavuşoğlu to remark that "pushing [us] to buy oil from countries other than Iran is going too far." The move created commercial tensions with China and India and may potentially unsettle global energy prices while contributing to destabilization in the Middle East.

Still, this new twist of the anti-Iranian sanctions is just another example of the U.S. foreign policy becoming increasingly egocentric under the Trump administration whose main driver is the "Make America Great Again" motto.

Nowadays, the whole world is impacted by these impulsive U.S. initiatives that produce political cracks and tensions. In the Middle East, they have triggered the blockade of Qatar, continuously complicate the situations in northern Syria and contribute to tensions around Israel. Sadly, the produced effect, besides being far from positive, ruins the previous U.S. administrations' successful achievements whose paramount importance remained valid for decades.

In 1978, the historic Camp David Accords brokered by the then-U.S. President Jimmy Carter, for the first time ever since the Six-Day War of 1967, fixed Israel's agreement to withdraw from Arab territory. It resulted later in Egypt and Israel signing a formal peace treaty to end their 31 years of war. Though far from perfect and suffering from substantial deficiencies, the accords paved the way for a far-reaching stabilizing impact on the general situation in the Middle East and to save the region for the years to come from protracted and open confrontations.

Peace for the Middle East

Israel seized the Golan from Syria as the result of the Six-Day War instigated to safeguard itself, believe the people of Israel. Syria had used that strategic plateau for shelling the country's north that jeopardized the very existence of the state of Israel. Roughly two-thirds of the wider Golan Heights are occupied since then by Israel in strong contradiction to the decisions of the U.N. Security Council and particularly Resolution 497. Israel's current attacks against the Iranian forces in Syria are a bid to keep Tehran from its northern border while its troops withdrawal is Israel's life dream.

The Syrian conflict has brought Israel and Russia closer together and their relations today are much warmer than during the Cold War years. Still, conflicting interests prevail behind the handshakes and smiles. Russia is a staunch supporter of Israel's bitter enemy, Syria and a joint coalition partner of its adversary, Iran. Besides, it was the Russian airstrikes that gave the Iranian and Hezbollah forces the necessary support for saving the Assad regime from an eminent collapse.

Construction of illegal settlements on the Golan Heights was started soon after the Six-Day War in pursuit of maintaining Israel's grip over the territory of strategic importance. Today, the population of the Golan Heights stands at around 50,000 people including 22,000 Israeli settlers spread over 33 settlements, according to the Israeli figures. Around 18,000 Syrians from the Druze sect, most of whom refuse to take Israeli citizenship, remain in the Golan Heights.

For years, peace in the Middle East remains fragile and easily disturbed by the outbursts of hostilities and the international community concerned contributes tons of effort to keep the Middle East stabilized and the correlation of force balanced.

With Donald Trump coming to office, U.S. policy has increasingly acquired its pro-Israeli stance. In December 2017, President Trump recognized Jerusalem as the capital of Israel, despite the Palestinian claims to the eastern part of the city. Following up on his decision, the U.N. General Assembly overwhelmingly passed a resolution asking the U.S. to revoke it, but that didn't happen. Trump's next move became his decision on the Golan Heights to cement the breaking-off from decades of U.S. peace policy in the Middle East.

Bearing no legal implications, Trump's decision has a political connotation. Benjamin Netanyahu's trump card, to win him the parliamentary elections, was his high foreign political ratings resulting from the U.S. recognition of Jerusalem as the capital and Israel's sovereignty over the Golan Heights. Both were done by the silent consent of Moscow where Netanyahu paid a surprise visit just five days prior to elections, the second one since the Russian reconnaissance aircraft had been shot down over Syria in September 2018.

For Moscow, friendly relations with Israel offer stronger influence in the Middle East, while for Israel, Russia is a lever to restrain Iran and eventually get its forces out of Syria.

In the light of developments in Syria and around it, the matters of its territorial integrity are a focus of international attention. Israel has seized roughly two-thirds of the wider Golan Heights from Syria and declared its formal annexation in 1981, this was unanimously rejected by the U.N. Security Council and international community but continues as such since then.The recent move by the U.S. president has reignited indignation with the Golan Heights annexation while affirming the international consensus that the area is occupied Syrian land. The Arab states have long demanded the area be returned, and they immediately condemned the March 21 decision of Trump to recognize Israeli sovereignty over the Golan Heights. The development further highlights Syria's absence from the Arab League, from which it was expelled at the start of insurgency against the Assad regime. While some Arab League members believe that Syria, one of its founders, should be readmitted others like Saudi Arabia and Qatar, supporting Syrian opposition, remain against this move.

A staunch supporter of the Syrian territorial integrity, Moscow currently keeps good working relations with Israel and supports the idea of it joining the effort to coordinate the foreign troops withdrawal there from. Prime Minister Netanyahu is keen on accomplishing a breakthrough with Moscow on Syria and doesn't exclude a possibility to reach an agreement on Israel's involvement in coordination, Russian sources reveal. Nevertheless, Israel's position is still waiting to be cleared and its consent may be well conditional on Russia's intention to facilitate the pro-Iranian military groups' withdrawal from Syria.

For Russia, Israel's engaging in coordination of foreign troop withdrawal would be highly important. Israel traditionally has strong relations of partnership with the U.S. and supports its continuous presence in Syria including in the operational zone around the al-Tanf military base positioned to control the activities of Iran.

The Russian side has continuously confirmed that a plan to establish such coordination does exist. It envisages, among other things, the Syrian government involvement in its implementing and an establishing of a working group to be tasked with "normalizing the situation in Syria after the last spots of aggression are eradicated."