The sociological supply and demand gap in Algeria 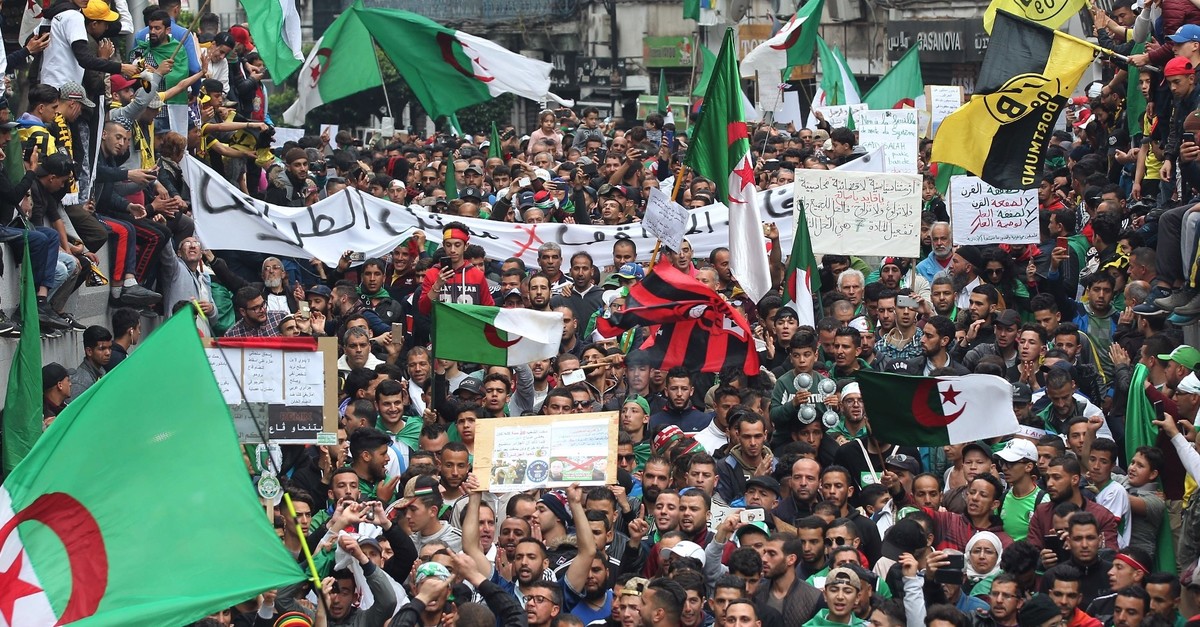 Algerian protesters take part in an anti-government demonstration in the capital Algiers on May 3, 2019.
by Hüsamettin İnaç May 09, 2019 12:08 am

Since December 2010, the continuous street protests have reminded us of the Arab Spring, which was composed of uprisings, rebellions, resistance, so-called revolutions and transformations. They were stigmatized as social movements in the general meaning by the world media.

In this sense, the term "social movement" can be defined as a collective, organized, sustained and non-institutional challenge to authorities, power-holders or cultural beliefs and practices. These movements are conscious, concerted and sustained efforts by ordinary people to change some aspect of their society by using extra-institutional means.

Social movements, many times, may drastically change national identities and the perception of life. Even upheavals and social turmoil can accelerate this kind of identity transformation.

The movements we encounter in the Middle East, for example, are a stance against dictatorships and anti-democratic governments in this region. These movements are really interesting because they derive from the peoples' own initiatives and without any leader or manipulation. For this reason, these movements are called the "Arab Spring" borrowed from the "Prague Spring of 1968." Probably, such definitions and descriptions may reflect some early feelings and excitement.

In this context, there are many important questions to be asked about the Algerian uprisings, the alleged latest example of the Arab Spring.

First, are the protests and the street movements in Algeria capable of the potential and possibility to meet social expectations? Will the establishment and military regime resist popular demands? Have external powers and imperialist actors' ambitions to intervene in Algeria in breaking out the changing and transformation potential within the region? Will the candidates who have the support of different segments of Algerian society be nominated against those of the establishment? Can the social movements which were initiated in Algeria create a deep wave and trigger sociopolitical dynamics of the entire African continent?

More precisely, the Algerian army is in a rush to protect its almighty position which it has kept up till now. Its strength is reflected in a public proverb that "every state has an army, but in Algeria, the army has a state."

At the same time, this proverb indicates the huge gaps between the civilian and military bureaucracy and ordinary people briefly in respect of beliefs, needs, demands, ways and life.

Nevertheless, military authorities have decided to take a position as a witness between people and the establishment in order to preserve its critical position in the next stages of sociopolitical changes. In this context, that is the reason why the chief of general staff declared that President Abdelaziz Bouteflika must resign in accordance with Article 102 of the Algerian Constitution as an opportunist actor.

However, initially Bouteflika rejected this offer but later took the step because of the determinant street protests which were seeing increasing participation. As a matter of fact, this withdrawal contains some threats, intrigue, and malicious intentions within itself because Bouteflika left the door open for the establishment by postponing the elections for an undetermined period of time.

One of the most important obstacles in the path to success for the sake of social movements is deprivation of leaders and leading figures. Even opposition leaders did not reject Bouteflika's candidacy and hesitated to take the people's side.

On the other hand, there are some disadvantages in front of the street protests such as the heterogeneous character of the protesters and the lack of common aims within the opposition wing; which are ready to be manipulated by the establishment. The international situation is also not suitable for the liberation movement in Algeria to attain its objectives because the Islamic world is living its weakest period.

Moreover, the U.S. combined with some Muslim states such as Egypt, Saudi Arabia, and the United Arab Emirates (UAE) under the auspices of the Middle East Strategic Alliance (MESA) called the "Arab NATO" and enslaved to their wills that these states will do everything in their powers to suppress the demands of the Algerians.

The declaration of Israeli sovereignty over the Golan Heights, the admission of Jerusalem as the capital city of Israel, and the American support of radical extremist Benjamin Netanyahu as the prime minister of Israel are some damaging parameters for the sake of Algerian protests. In line with these developments, the Muslim countries mostly did not react against U.S. policies to create permanent chaos in the Middle East.

The U.S. watched for an opportunity to replace France in the African peninsula as an imperialist power and even planned to manipulate such a development to create a so-called "African Spring."

From this perspective, it is important to appreciate that the transformation of the Arab world is probably still in its early stages. To talk about "revolutions" is exceedingly premature. So far, its most dramatic achievements are the overthrow of the elderly rulers of Egypt and Tunisia.

However, the basic structure of these regimes remains intact. For example, Hosni Mubarak may no longer be Egypt's president, but the army is still firmly in command. There is also a concerted pushback against the protesters by regimes such as Bahrain, Yemen and Syria, often with the support of regional players such as Saudi Arabia.

In addition, the European states attempt to make such movements moderate and bloodless, preventing an immigration flux and to maintain the status quo in Algeria with only minor revisions. Unfortunately, it can be said that the street protests in Algeria are not capable enough to have radical changes and constitutional amendments and plural democracy at least in the foreseeable future.

* Dean of Faculty of Economics and Administrative Sciences, head of Political Science and International Relations at Dumlupinar University