Amidst local election backlash, May gambles on a Labour lifeline 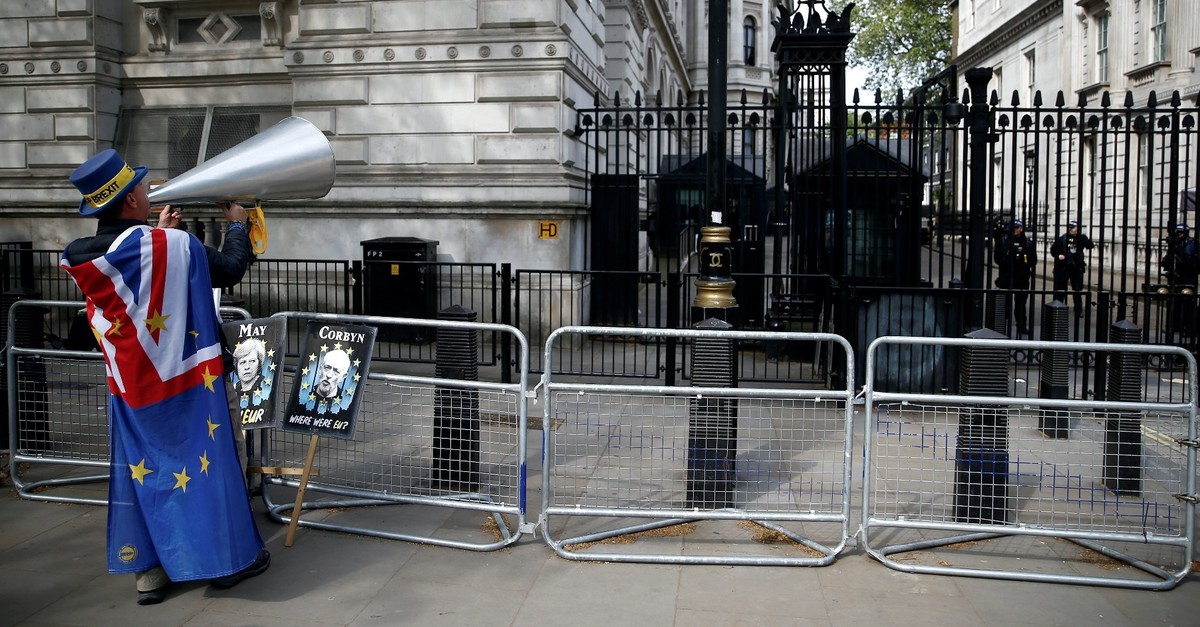 An anti-Brexit protester demonstrates outside Downing Street, as uncertainty over Brexit continues, London, Britain, May 7, 2019.
by Bashdar Pusho Ismaeel May 10, 2019 2:05 am

By failing to entice Tory rebels into her withdrawal deal, and now, with the political risk of relying on the opposition to break the deadlock, May has backed herself into a tough corner

Almost 3 years since the historic EU referendum, the emphatic message from the recent local elections is that the people are fed up and frustrated from the Brexit impasse and want political parties to get on with finally delivering Brexit.

The U.K. local elections saw the Conservatives lose over 1,300 councilors. However, the public backlash was not channeled at the warring Tories alone. Far from the expected gains, the Labour party actually lost 82 seats.

U.K. Prime Minister Theresa May pleaded with Labour opposition leader Jeremy Corbyn to "listen to what voters said" in the recent local election, put differences aside and do a deal. The nature of May's pleas to a rival party says much about her political predicament and the disastrous state of Brexit.

The U.K. failed to leave the EU as planned on March 29 with a new deadline of Oct. 31 agreed with the EU bloc.

After May's proposed EU withdrawal deal was emphatically rejected three times by Parliament, the Tories finally entered contentious talks with Labour in hope of securing a Brexit compromise and breaking the impasse.

With the withdrawal agreement rejected by a significant portion of both Tories and Labour MPs, encompassing both 'Remainer' and 'Brexiteer' camps, Parliament made it clear what it didn't want. However, it's never been clear what it is prepared to vote for, making compromise from so many different sides of the divide a difficult undertaking.

By failing to entice Tory rebels into her withdrawal deal, and now, with the political risk of relying on the opposition to break the deadlock, May has backed herself into a tough corner.

The gamble may backfire

The gamble to work closely with Labour may backfire spectacularly for May unless she is bailed out by opposition MPs.

Finding compromise with the Labour Party will mean potential scenarios being proposed that will ultimately deepen the Tory civil war.

It has been strongly rumored in recent days that May would make bold concessions to Corbyn of a temporary but comprehensive customs union until the next general election in 2022, with the U.K. aligning closely with EU work rights and also agreeing to align with a wider range of EU single market regulations on goods.

The chairman of the 1922 committee of Tory backbenchers, Sir Graham Brady, warned that staying in a customs union could lead to a "catastrophic split" in the party.

However, some Tory PMs such as Rory Stewart, the International Development Secretary, have indicated that "short-term pain" and a Tory party split may be a price worth paying if it means a Brexit deal can be done.

May stated that finding "unified, cross-party position" with Labour was not the choice she wanted, admitting that members of her party "find this decision uncomfortable".

Such words are unlikely to soothe angry Tories, and will only accelerate calls for her to quit. Ultimately, May has to take a lion's share of the blame for finding herself in a position where she is relying on support of the opposition and not her own party for a Brexit breakthrough.

Any deal with Labour is only worthwhile if it can unlock more Parliament doors than that become closed.

It's not just the Conservative party that carries risks; many Labour PMs are displeased with Corbyn for effectively bailing out their political rival from a mess they created.

However, while the Tories may have taken the brunt of the public backlash in the local elections, the message was clearly also for the Labour Party. People are clearly displeased at the mannerism of the opposition in this political crisis. Far from stealing Tory council seats, Labour actually lost seats.

Corbyn, who acknowledged that the local election results signaled voters wanted MPs "to get a deal done" on Brexit, does not want to lose further credibility with the public by being portrayed as the obstacle to a Brexit solution, but clearly working with Tories carries political risks.

Either way, Labour must portray any compromise agreement on Brexit as a Tory cave-in.

Dozens of Labour PMs are likely to be alienated by any deal, especially those that seek another referendum. Labour PMs are particularly skeptical of the long-term validity of any deal. With Tory vultures circling around May's head, there is always the danger that if the likes of Tory Brexiteers Boris Johnson or Dominic Raab secure the leadership, then they could quickly dismantle the deal.

With a number of Tory and Labour PMs likely to turn on their respective leaders, even if a compromise can be struck between the parties, Commons success is not guaranteed.

There were suggestions from some Tory circles that a compromise deal was close, but this is likely to be a marketing ploy rather than a reflection of reality.

In fact, the Shadow Chancellor John McDonnell, who indicated a lack of trust for May after Tory negotiating positions were leaked to the media, rejected proposals of a temporary customs union to win Labour support.

He underscored the need for a permanent customers union, which may woo some Labour PMs b

ut kill off much more Tory support for May.

McDonnell made a damning assessment of the cross-party talks, likening it to "trying to enter a contract with a company going into administration."

Meanwhile, the People's Vote campaign, which demands a referendum on the final Brexit deal, is gaining momentum with a letter signed by more than 100 opposition PMs.

The political paralysis from the Brexit debacle has not eased but deepened further. What was May's mess that was hoped to quickly resolve is now also a noose for the Labour leader, with both mainstream parties at risk of irreparable splits.

Now, both parties brace themselves for a further backlash from the public via the EU Parliament elections in a few weeks' time, an event that they the people will feel forced to participate in due to the failure of their politicians.

With more twists in the Brexit tale to come, the political roller coaster for the disenchanted public is set to continue.

* Op-Ed contributor based in London