Civil organizations under political pressure in the Netherlands 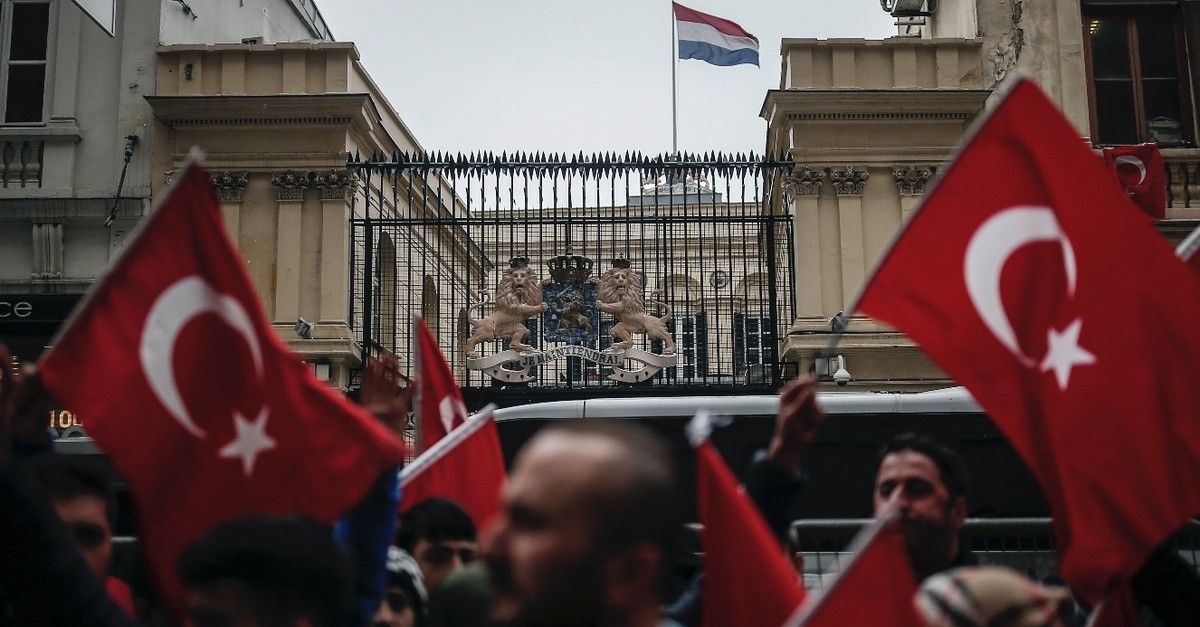 A group of people protest against the Dutch governmentu2019s controversial decision to ban the Turkish foreign minister from travelling in the Netherlands, outside the Dutch Consulate, Istanbul, March 12, 2017.
by Fatih Öztosun May 13, 2019 12:06 am

The policy framework regarding the integration of migrants in the Netherlands is becoming more restrictive. Integration has become an inseparable part of the agenda of political parties in which ethnic minorities are increasingly instrumentalized. Hardly any difference can be found anymore between the statements of populist right parties and mainstream parties about subjects related to ethnic minorities. Recently the Dutch House of Representatives came up with a radical decision to interrogate mosques, whereby participants are legally obligated to cooperate and give information under oath.

An official definition of the concept of integration has never been given by Dutch authorities. The integration of non-Western migrants (migrants with a Turkish, Moroccan, Surinamese and Antillean descent) has been a topic for discussion in Dutch politics since the 1980s. The policy framework regarding the integration of migrants has been changed over time. Initially, integration was primarily aimed at closing the social economic gap between autochthones and ethnic minorities, but over time the focus was also placed on cultural aspects whereby cultural preservation was increasingly seen as a risk to integration and social cohesion. Integration has become an increasingly politicized topic. Western and Dutch values are put forward as essential to successful integration, and persons with a migrant background are expected to internalize these values. For example, in 2017, a proposal by former Minister Lodewijk Asscher was approved concerning the so-called "participation declaration" that requires newcomers to sign a statement about the rights, duties and cultural norms of Dutch society.

Various other decisions have been taken since then in the context of integration policies. Since 2014 there have also been discussions about the contribution to integration of Turkish civil organizations in the Netherlands. In 2014, Former Minister Asscher (Labour Party, PvdA) claimed that Turkish Muslim organizations do not contribute to integration. This statement led to many reactions. Two members of parliament of Turkish origin were expelled from the Labour Party because they did not agree with the statement and the restrictive integration policy of Asschers' party that wanted to be implemented with regard to Turkish organizations. Even more striking was that the academics that did the research on which Asscher based his statements announced that the minister was manipulating the findings of the research. Dutch academics stated at the time that the demand for integration of associations is inconsistent on a legal basis because associations are actually established on the basis of the freedom of religion and the right of assembly and association and not with the aim to behave in the framework of a political agenda like "integration."

After the coup attempt in 2016, Turkish organizations were invited to the Dutch Parliament for a hearing by a commission. The argument was that political developments in Turkey influence the integration of Turkish society negatively and lead to polarization and tensions. There was a disapproving attitude in Dutch politics about the ties of Turkish civic society with Turkey. During the hearing, associations were asked by members of parliament about their opinion on political developments in Turkey and if they have any relationship with the Turkish government.

In February, the pressure on Turkish organizations went so far that a member of parliament of the government party VVD publicly indicated that the government should not accept organizations as interlocutors that do not contribute to integration like the Islamic Foundation Diyanet and Milli Görüş. Also, the language parents spoke at home with their children and their political choices in their country of origin were made a topic of discussion. The House of Representatives has recommended that the government develop a strategy against the diaspora strategy of Turkey.

Foreign funding of Dutch-Turkish associations has been questioned in Dutch politics since 2016 with the argument that "unwanted foreign interference" should be prevented because according to Dutch politics this kind of interference will block the integration of the Turkish community. The promise to restrict foreign funding was also written in the government agreement. In August 2018 discussions started about weekend schools in the Netherlands that are funded by Turkish authorities for Turkish language and culture education.

In Dutch politics, it is claimed that these weekend schools are schools of President Recep Tayyip Erdoğan and that they should be forbidden and dissolved. Some experts in the Dutch-Turkish community criticized the reactions of politics because the Netherlands has not offered mother tongue education at schools to migrant children since 2004. It is even forbidden to teach Turkish in primary school. They ask the Dutch government to respond to the need for mother tongue education itself, if it does not want any financing from other countries. Some associations indicated that they have had weekend schools for years and that they have been mistakenly portrayed as suspicious by the attitude of politics.

In March 2019, the Dutch Parliament decided to investigate and question Muslim organizations about foreign funding. It is the most radical investigation method used by the House of Representatives in the context of its monitoring task. It is called "parlementaire ondervraging" in Dutch. It aims to interrogate mosques under oath, and they are legally obliged to cooperate. The commission that will be set up by the Parliament even has the legal authority to view documents of associations and enter places.

In February 2019, the government made some declarations about foreign funding and weekend schools due to questions from the Parliament. The minister said that countries are free to encourage the preservation of their own language and culture abroad and that the Netherlands does this too. It is known that the Netherlands offers Dutch language and culture education to Dutch children in almost 200 schools in 115 countries. The minister also mentioned how many associations in the Netherlands are financed by Turkish authorities, which is interesting because it shows how disproportionate the associations want to be controlled. The integration of Dutch volunteers that work because of solidarity with the military of Israel has never been questioned or the donations that the far-right Freedom Party (PVV) receives from the Islamophobic David Horowitz Center and the regular visits of Geert Wilders to the Israeli Embassy.

The minister reported that foreign funding may increase "problematic behavior" and that funding from "unfree countries" must be forbidden. The Netherlands' own experts criticized this explanation because the concepts "problematic behavior" and "unwanted foreign funding" do not correspond to criminal law and sanctions based on these vague terms are a threat to the democratic legal order. The concept of an unfree country is also seen as not objective. Turkey is one of the countries on the list of unfree countries in the explanation of the minister. The explanation about foreign funding is interpreted by critics as othering Muslim organizations because it not aimed at other organizations – only mosques.

The report adopted by Council of Europe's Venice Commission experts in March on standards with respect to foreign funding of nongovernmental organizations in Council of Europe member states is interesting in the context of the discussions in the Netherlands. The report stresses that the right of associations to seek financial and material resources is protected as an "inherent part" of the right to freedom of association and that this concept has been confirmed already in international instruments, including Article 11 of the European Convention on Human Rights and Article 2 of the International Covenant on Civil and Political Rights.

It is written that restrictions can only be based on a prior risk assessment indicating plausible evidence that is "sufficiently imminent to the state or to a democratic society." Abstract "public concern" and "suspicious" about the legality and honesty of financing of the nongovernmental organization (NGO) sector – without pointing to a substantiated risk analysis concerning specific involvement of the nongovernmental organization sector in the commission of crimes – cannot justify restrictions to this right. It is also written that states must create an enabling environment in which associations can effectively operate and facilitate access of associations to (foreign) funding to achieve their aims.