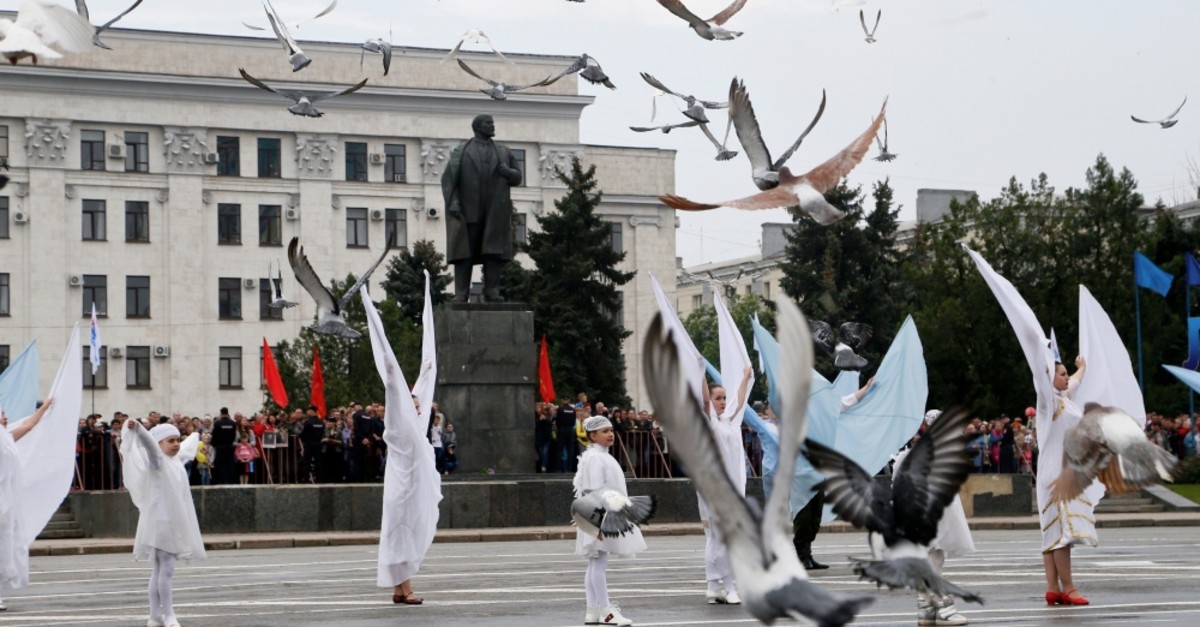 People take part in Victory Day celebrations to mark the defeat of Nazi Germany in World War II, as pigeons fly above in the rebel-controlled city of Luhansk, Ukraine, May 9, 2019.
by Görkem Dirik May 14, 2019 12:02 am

Unforeseen political events have taken place over the past months in the heart of Eurasia, specifically in Kazakhstan and Ukraine. On the one hand, the unanticipated landslide victory of the comedian and TV star, Volodymyr Zelensky, in Ukraine's presidential elections, did not only mark the end of technocracy in Ukrainian politics but also revealed the discontent of the people of Ukraine with the country's current political figures. On the other hand, pieces of analogous baffling news convulsed Eurasian politics following the announcement of Nursultan Nazarbayev, or Elbasy, meaning "Leader of the Kazakh Nation," that he would step down from the presidency after 30 years in power. Following his resignation, the life-long leader of Kazakhstan handed over power to the former Minister of Foreign Affairs and Prime Minister Kassym-Jomart Tokayev, who seemed to be the best possible technocratic option Kazakhstan had.

Nevertheless, the shift in power in Kazakhstan and Ukrainian politics from high-profile figures to relatively low-profile figures has raised numerous questions pertaining to whether this jeopardized the implementation of a "multi-vector" foreign policy.

The Turkic republics in Central Asia are blessed with rich oil and gas resources. Within these republics, Kazakhstan stands out with its huge geographical size, natural resources and relatively more stable and well-governed statehood. Due to its resources and enormous size, Kazakhstan finds itself crammed between the interests of rising powers, regional powers and the superpowers.

Theory suggests that because of their vast natural resources, the newly independent states may act pragmatically, as globalization has led to economic interdependence, wherein both the small states and the bigger states need each other. Finding itself geographically enclosed between Russia, and an emerging China, Kazakhstan constructed its foreign policy on principles of multi-vectoral relations.

As the founder of the Kazakh state and one of the architects of Kazakhstan's current foreign policy, former President Nursultan Nazarbayev stated that his country's prominence lies with the fact that it is uniquely positioned to be a bridge between Europe and Asia, which is the core reason behind Kazakhstan's multivectoral foreign policy. Therefore, through the implementation of multivectoral foreign policy, Kazakhstan manages to triangulate its relations between the West, Russia and China. This allows Kazakhstan to adopt strategies of balancing and bandwagoning, such as maintaining a broad array of partners, both economically and politically from competing blocs, without creating any pronounced adversaries in the international arena.

For instance, Kazakhstan has carefully cultivated its international partners in the extraction, processing and export of its natural resources, through which the country has adeptly avoided dependency on any single external state while maintaining friendly and productive partnerships with multiple geopolitical actors, not all of whom are friendly with each other.

However, the country's decision to become a member of the Eurasian Economic Union (EEU) in 2014 cast doubt on the fact as to whether this marked the end of Kazakhstan's successful implementation of multivectoral foreign policy. This was mainly due to the logic that Kazakhstan had a special relationship with Moscow, which embraced Kazakhstan as a key partner whose participation in the EEU was crucial to the success of the organization.

However, as part of its balancing strategy, Kazakhstan soon diversified its foreign policy mechanisms by establishing closer ties with the West. This included bilateral agreements with the EU, cooperation on the disarmament of Kazakhstan's nuclear arsenal with the U.S. and the establishment of its first major international oil exploration partnership with the U.S. company, Chevron. According to the former Kazakh leader, Nursultan Nazarbayev, this averted any threats to Kazakhstan's national security.

Consequently, it can be said through frameworks of multivectoral foreign policy, Kazakhstan has been able to curtail security-related questions that have arisen. Take, for example, the case of Russian attempts to enclose Ukraine. Therefore, Kazakhstan through the implementation of the multivectoral strategy has been able to accommodate Russia and China as well as to constitute a viable modern democratic state.

In other words, this policy has enabled Kazakhstan to preserve its amicable relations with Russia, in order to attract the Western world to its energy sector and to feed China's increasing thirst for energy in the face of its growing industrialization process.

In the midst of alternating leadership, we can contend that this will lead to a bifurcation in Kazakhstan's long-sustained multivectoral foreign policy. Nazarbayev handed his presidential locus standi to Tokayev, which was an obvious indication that Nazarbayev is determined to act as a "watchdog" in Kazakh politics as well as to conserve Kazakhstan's current stance in international and regional affairs.

Therefore, it can be said that Tokayev stands as the best possible technocratic option for the country, who is expected to continue Nazarbayev's political legacy, both in domestic and foreign affairs. In this regard, the interim president and the mastermind of Kazakhstan's foreign policy, Tokayev, who will also run for the presidency in the snap elections scheduled for June 9, has publicly stated that his country will preserve the current status quo. Hence, alleviating fears and mitigating the possibility of a drastic shift in Kazakhstan's position, Tokayev acknowledged the superior position of Nazarbayev, who will remain as the head of Kazakhstan's Security Council for life.

The same for Ukraine

On the contrary, the same cannot be said about Ukraine. The decades-long systematic Russification policy of both Czarist and Soviet Russia has significantly weakened Ukraine's ethnic identity. This led the country to suffer never-ending ethnonational problems, thus leaving the country linguistically divided, and ethnically polarized. Therefore, the ethnonational competition between ethnic Ukrainians and Russians obstructed Ukraine's hand in implementing a successful multivectoral foreign policy.

More specifically, although linguistically Slavic and a culturally proximate nation to Russia, the ethnic Ukrainians, weary of the constant deteriorating economic conditions, embraced the EU as the only loophole to escape from the country's endemic problems, such as corruption.

However, the kinship between the ethnic Russians in Ukraine and their "motherland" (Rodina) Russia created a zone of political polarization, and as such was reflected upon during many presidential elections in Ukraine.

In other words, the people of Ukraine were compelled to make ethnocentric decisions in almost every national election since the declaration of independence. This mitigated Ukraine and its electorate to search for viable options and further forced them to choose either pro-European (represented by ethnic Ukrainians) or pro-Russian (represented by ethnic Russians in Ukraine) presidents. Apart from aggravating ethnic tensions, this resulted in a further oscillation in Ukrainian politics between pro-Westerners (ethnic Ukrainians) and pro-Russians (ethnic Russians).

The ethnic tensions present increased Ukraine's vulnerability and transformed the country into a fragile state, open to external interventions. Years of meddling by Western countries in support of Ukraine's right to integrate into the EU was countervailed by Russian efforts to preserve the ethnic Russians in its sphere of influence. Such interventions prevented the Ukrainian political elite in finding a consensus between the demands of its ethnically and politically divided electorate, which gave birth to the 2004 Orange Revolution and in 2013 Euromaidan. As a result, the Ukrainian policymakers failed to implement multivectoral policies between the West and Russia, which thus culminated in a civil war as well as the de facto dissolution of Ukraine.

Amid high expectations, the former president of Ukraine, Petro Poroshenko, failed to materialize the demands and expectations of the Ukrainian electorate after the Maidan revolution. His inability to introduce tailor-made solutions to Ukraine's ongoing problems coupled with the lack of his political-wisdom further deteriorated the socio-economic problems in the country. Moreover, throughout his incumbency at the presidential post, Ukraine confronted a detectable aggravation of nepotism and corruption in governmental and bureaucratic branches across the country, which gradually decreased his accountability, credibility and reputation as president.

During this era of political turbulence, Volodymyr Zelensky appeared as the only option "at home," thanks mainly to the drastically growing anti-Poroshenko sentiments amongst Ukrainians. Despite his inexperience in politics and lack of academic knowledge in world affairs, Zelensky managed to rally the infuriated masses, by ridiculing Ukrainian politics and politicians on social media. Therefore, it can be said it was Poroshenko, himself, who handed his former post of the presidency on a golden platter to his opponent, Zelensky. As absurd as it may sound, today Ukraine is run by a comedian, a country at a de facto war with Russia as well as with a country with vast socio-economic and ethnic problems.

Nevertheless, it can be argued that the new cabinets under the leadership of technocrat (Tokayev in Kazakhstan) and rookie (Zelensky in Ukraine) politicians will thus further examine the implementation of the multivectoral foreign policy. In this regard, it is important to note that Kazakhstan and Ukraine are indispensable partners for the Western bloc, due mainly to their balancing role in the face of ever-aggressive Russia and a rising China.

Therefore, it is highly likely that the Western bloc will exert political pressure on Kazakhstan's new cabinet and its leader in order to preserve the country's role as the "buffer state" between the East-West geopolitical dynamics. In addition, the West will also take the mandatory precautions to prevent a possible shift of power in Kazakhstan's foreign policy at the expense of Russia.

Nonetheless, on the Ukrainian side of the court, there are several uncertainties. First of all, Ukraine's engagement with the European Union, particularly following the ratification of visa-free travel for Ukrainian citizens, has not "fanned the flames" regarding the country's continuous oscillation between Russia and the West.

Secondly, Ukraine's attempts to implement multivectoral foreign policies have proven fruitless in the hands of technocrats in the post-Maidan era. This raises a crucial question as to whether a TV star "comedian" can overcome such political obstacles in a country, where anti-Russian sentiments still dominate the socio-political climate in Ukraine. Moreover, there are severe allegations regarding Zelensky's ties with oligarchs, such as Ihor Kolomoisky, who has been accused by the FBI of laundering money, ordering contract killings, and clandestinely financing Zelensky. Indisputably, this solidified the rumors vis-a-vis Zelensky exerting nepotism and corruption in Ukraine.

At this point, I would argue that Zelensky may need more than luck, namely a miraculum dei to alleviate Ukraine's never-ending agonies. This is to say, it seems highly unlikely that Zelensky will be able to "weather the storm" under current conditions and accusations, considering his inexperience, and the lack of intellectual know-how in politics, which diminishes the hopes for "bright days" for Ukraine.

* Op-Ed contributor, holds Master of Science in Conflict Studies and Nationalism from the London School of Economics (LSE)