How to buy a revolution: Sudan's story 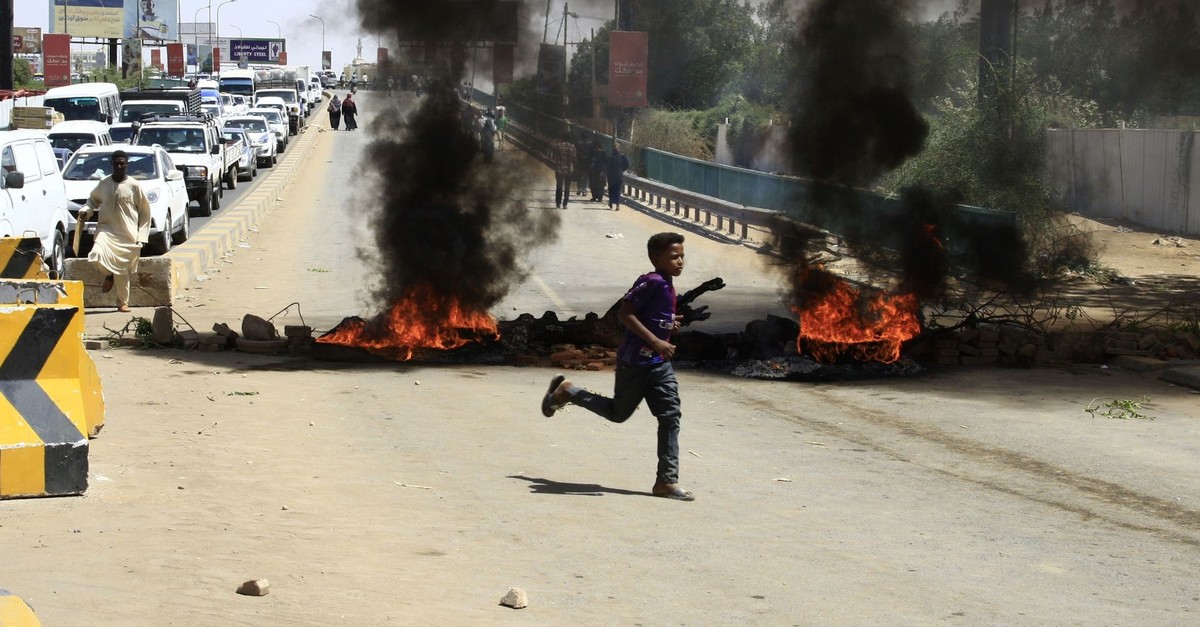 The U.S. and regional autocrats are repeating their policy stance from the so-called Arab revolutions against the current Sudanese protests and follow an interest-based strategy backing military rule

In Saudi Arabia's war chest, one of the tried and true ways to protect their throne from various threats, including the threat of democracy, is to write a check. And I call it war chest because the democratic struggle is seen as saber-rattling by the House of Saud. In order to defang this enemy, Saudi Arabia goes to horrible lengths to prevent the heat of democratic struggle from reaching it. If neighboring countries get funny ideas, such as a right to a democratic government, freedom of expression, the rule of law and so forth, the Saudis and Emiratis never fail to preemptively reach out and throw their weight behind the enemy of their enemy.

Jamal Khashoggi, a Washington Post columnist, was slaughtered "Pulp Fiction" style inside the Saudi Consulate in Turkey. Others like Iyad el-Baghdadi have been warned of a similar fate by the CIA. However, there is always some external limit to every negative tendency. Everyone cannot be executed based on a whim. Therefore, the Saudis have loosened their war chest and placed the order for the Sudanese revolution.

Role of Saudi Arabia, UAE and US

If rhetoric was the real indicator of a country's democracy-supporting credentials, the United States would stand out as the true defender of democratic ideals. That has been the image in the minds of many people because that is what Americans say – and they say it repeatedly year after year, decade after decade, reflexively. However, if actions were really to speak louder than words, which I don't believe is ever the case, especially in politics, then the United States and United Kingdom duo or the United States and Saudi Arabia duo would stand alone as the true players deterring democracy abroad.

In the wake of the so-called Arab revolutions, the United States as well as the Saudis came down on the side of the regime of Hosni Mubarak of Egypt until it became impossible to protect him and then the United States joined the side of the Tahrir Square crowd and started behaving as if it was always on their side. The Saudis aggressively came to the defense of the regime in Bahrain, where most people are Shiite, but the regime has been Sunni. Saudi and Emirati troops were allowed inside Bahrain by the Bahraini regime to safeguard against the threat of people demanding democracy. It was violently crushed.

The U.S. Navy's Fifth Fleet, which has been stationed in Bahrain since the mid-1990s, has been the key to projecting American power in the region and ensuring safe passage of oil to global markets. Regime change through democracy could have brought a democratic government, which may or may not have allowed the continuous stationing of the Fifth Fleet. The "devil-you-know is better than the devil-you-don't" mindset prevailed here too. Simply fill in the rest.

We are now witnessing the same phenomenon in Sudan. The street protests followed by the military's role as well as the U.S. and other regional autocratic powers' response to it is the same déjà vu all over again. Omar al-Bashir has been removed from power and sent to prison, bringing his three-decade reign to an end. However, the jubilation was disrupted when the old guard crept back in quietly, the usual epilogue to stories of democratic struggle. The military helped remove al-Bashir from power but are now reluctant to just hand over the power to the civilians, who started this revolution. The people's brief joy was replaced with frustration and desperation. Alex de Waal, a Sudan expert at Tufts University said, "It's basically al-Bashir's henchmen taking over. It stops a civil war among Sudan's rivalrous military oligarchs, but it won't satisfy the demands for democracy."

Abdel Fattah Abdelrahman Burhan is the current head of state of Sudan, whose deputy, General Mohamed Hamda – also known as Hemeti – is the man who controls the Rapid Support Forces. That is the same powerful paramilitary group drawn from the same ethnic group as the Janjaweed militia that carried out the fearsome slaughter campaign in Darfur in the 2000s. Most of the protesters are from Darfur.

'Wanted' by the ICC

The Sudanese military guard wants the power for itself and are backed in this noble cause by the usual suspects: Saudi Arabia, the United Arab Emirates (UAE) and the champion of freedom and democracy, the good old United States of America. A little mention of unmentioned realities here becomes indispensable because many might argue that the United States is taking no sides here in Sudan. The truth is that Omar al-Bashir had been a Russian ally. Al-Bashir is wanted by the International Criminal Court (ICC) for crimes against humanity and war crimes in the Darfur region. He earned American sanctions by hosting Osama bin Laden in the 1990s. Sudan has been designated a terrorist state by the U.S. since 1993. Never mind that England had hosted bin Laden and his office Maktab-al-Khidmat (the Services Bureau) around the same time as well. The office issued countless calls for violent jihad from that England office, a fact down the Orwellian memory hole now.

Kenyan leader Uhuru Kenyatta is also wanted by the ICC for crimes against humanity, including murder, rape, persecution and deportation, committed during the post-election violence in Kenya. However, he has been cleared of the charges thanks to the mysterious refusal of a key prosecution witness to testify and another one admitting to lying. The one thing that Kenyatta has in his resume that al-Bashir doesn't is that Kenyatta is a U.S. ally.

The support for anti-democratic elements is so deeply internalized in the American power system and American journalism that Declan Walsh in The New York Times complained about the United States being absent from the scene in Sudan when so much is happening there. He said, "The United States has largely been absent from the international engagement with Sudan at the very moment when the country's future is up for grabs." Let me decipher the coded language, which otherwise may sound like Walsh is urging the U.S. to play its role in promoting and supporting democracy in Sudan now that the time is appropriate. He actually means to say that it should be the United States that should micromanage the country's future and control the events of the future to ensure the country moves forward in the direction favored by rich U.S. corporations and the U.S. government.

Saudi Arabia and the UAE pledged a $3 billion aid package to Sudan as well as diplomatic clout in an effort to tip the scales in favor of the Sudanese generals. Turkey and Qatar have been unique in stark contrast to the whims and ambitions of the usual suspects by demanding that the power be given to the people of Sudan. The funniest statement came from Egypt, saying it supports "Sudanese people's choice and will" because General Abdel-Fattah el-Sissi of Egypt himself crushed the Egyptian "people's choice and will" by removing Mohammed Morsi, a democratically elected leader belonging to the Muslim Brotherhood, in a bloody coup.

Egypt has a history of strained relations with Sudan. First, in a late 2017 visit by President Recep Tayyip Erdoğan to Sudan many agreements were signed to boost the economic partnership between Turkey and Sudan. One of the agreements was for Turkish investors to rebuild the Red Sea island of Suakin to boost tourism and provide a transit point for Muslim pilgrims to cross the Red Sea and be able to reach the holy city of Mecca in Saudi Arabia. Egyptians and Saudis criticized the agreement by labeling it as an attempt to undermine the stability and security of Saudi Arabia, the UAE and Egypt, which they called a "Sunni moderate alliance." At least these Arab nations have retained their sense of humor. Calling these countries "moderate" is the ultimate joke. Easing Muslims' path to Islam's holiest site to be touted as a threat is another joke.

There are other factors that have affected the relations between Sudan and Egypt. One is the Halayeb Triangle issue, which is a 20,500-kilometer land area that both the nations have a claim to. The issue had been on the back burner for a while until Cairo signed a controversial agreement with Riyadh in 2016 where two strategically important Red Sea islands, Tiran and Sanafir, were handed over to Saudi Arabia. The agreement redrew the maritime borders between the two countries and Saudi Arabia recognized Egyptian sovereignty over the Halayeb Triangle.

Another bone of contention between Egypt and Sudan has been the Grand Ethiopian Renaissance Dam (GERD), which once completed would be the seventh-largest hydroelectric power plant in the world. It is being built in the Benishangul-Gumuz region of Ethiopia, which is only 40 kilometers east of the country's border with Sudan, which stands to benefit from the project in the form of an electricity grid in Khartoum and limiting the flooding of the Blue Nile in Sudan, thus benefiting agriculture. Cairo fears that Khartoum would side with Ethiopia regarding the future of the dam, affecting Egyptian access to water from the Nile River basin. Further straining the ties between Egypt and Sudan is Egyptian anger over alleged Sudanese support of the Muslim Brotherhood's plans to overthrow the regime of Egyptian President el-Sissi.

Apart from the fact that Sudan has sounded alarms with democratic uprisings, it is important for a number of other reasons to the Saudis. Sudan provides Saudi Arabia with two forms of living beings that the latter can use for slaughter; namely goats for Eid and child soldiers for the war in Yemen. Democracy will return to Sudan, but only after it has crossed Saudi Arabia and the UAE.