Theresa May's legacy: Destroyed by archrivals, or herself? 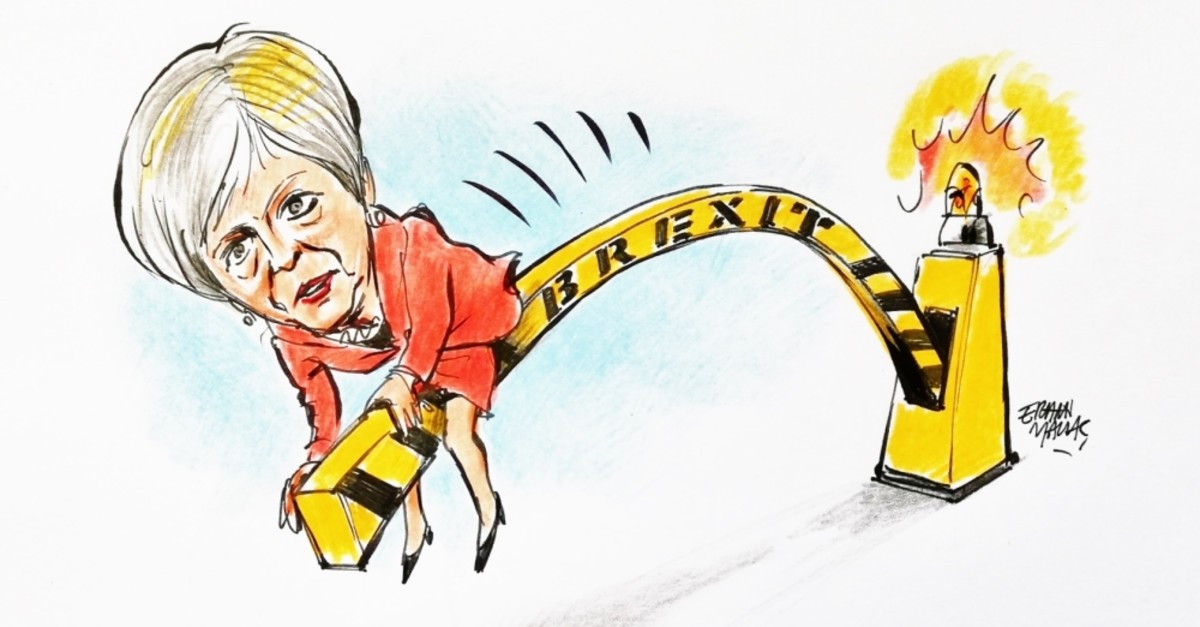 The path that led to Theresa May's resignation was paved by members of her own party, cemented by the EU's indifference and aggravated by her own failures. How Brexit will be carried out and by whom remain the lingering questions

A world leader is in political free fall after announcing resignations both as party chairperson and as prime minister – but who and what led to this development? Was it Brexit and Brexit alone? Or are there other, more difficult to detect undercurrents above all else in Theresa May's own party which made governing no longer an option?

Behind closed doors and in hushed voices influential circles within the British Conservative Party (officially the Conservative and Unionist Party) had it suggested for quite some time: In order to see Brexit through one person would need to go. No, not just another Brexit minister – the prime minister herself was supposedly in the way of getting a deal done. After her first defeat in the House of Commons when her withdrawal agreement draft was rejected, those voices became louder and by around early March the question was no longer if, but when.

The first indications of what lay in store for May became apparent when Stephen Barclay replaced Dominic Raab as secretary of state for exiting the European Union on Nov. 16 of last year. Raab had gone public with his resignation letter; a practice not necessarily seen as the diplomatic choice as some critics say resignation letters are a private matter between politician and prime minister.

He had employed frank wording, more direct than what Brussels and London had gotten used to from a politician who had acquired a much-respected place in Brexit negotiations during his albeit very short period in office. Raab wrote "I cannot support an indefinite backstop agreement, where the EU holds a veto over our ability to exit. The terms of the backstop amount to a hybrid of the EU Customs Union and Single Market obligations. No democratic nation ever signed up to be bound by such an extensive regime."

In other words: The man in charge of heading the negotiation teams and frequently meeting with EU counterparts disagrees about what he actually has to agree with on behalf of his boss, Prime Minister Theresa May. Either he did so before accepting the job hoping for significant changes along the way, or he realized his discontent once installed in the new role. No matter which is true his letter sent shockwaves through the political establishment. Not only this: Step by step it became obvious that a sizable segment of the Conservative Party itself would support Raab's assumptions. The question on everyone's mind: Is the prime minister doomed? In order to better understand who decides in conservative party politics we must scrutinize the role of what is called the 1922 Committee. Initially the parliamentary group of MPs who do not hold cabinet or other leading government positions (of course this only holds when the Conservative Party is in power), today the latter are invited on a regular basis, too.

First and foremost it is this committee which any prime minister must have solidly on her or his side. It is much more relevant than the party caucuses; granted, you get nominated to run as party chairperson via party members but once in office the 1922 Committee would be your most important opposite number.

And it was here during a 1922 Committee meeting in December of last year where Theresa May first announced her willingness to no longer lead her party into a general election. She knew that this was her only chance of staying in office, at least for another year. But she and her party and the entire public now knew that her days as prime minister were clearly numbered.

Could Brussels come to May's rescue?

One should not overlook the rather important detail that Theresa May was a half-hearted "remainer" who once in power had to accept the will of the people and see Brexit through. It is no secret in this context that even former Prime Minister David Cameron was hoping for that the referendum would go his way; that is, "remain" would come out on top. May had thus a very delicate and complicated task ahead of her ever after she replaced David Cameron as prime minister.

It is not unfair to say that she would probably have hoped for more active support from the side of Brussels to help her in this delicate role. But besides countless handshakes and doorstep photo opportunities the EU's negotiators put forward one proposal and that one proposal only, and asked London to either accept it or walk away.

And now it became clear that her very own administration had supposedly left most major decisions about what London actually wants, what type of contingency plans would be required and most importantly, if there is "no deal" how could Britain cope with it?

With very little legal and political ammunition, so to speak, in order to tell Brussels what London actually prefers no wonder then that the EU soon got the upper hand; "take it or leave it" was their slogan.

What May took to Brussels was more the "what we do not want" list of agenda items instead of constructive policy proposals.

Theresa May 2.0 or hard-liner next?

After June 7 – the day May officially steps down as party leader but stays on as prime minister until her successor has been chosen – candidates who wish to replace her will be tested and interviewed, narrowing choices down to two before the 124,000 party members have their say. As many names circulate this article could not pay line space to all of them so let us only mention that former Foreign Secretary Boris Johnson is one of the front-runners, and yes indeed, former Brexit Secretary Dominic Raab is slowly warming up and increasing his candidate visibility, too.

Should a hard-liner get elected, the risk of exiting with no deal might resurface. Could the present Oct. 31 deadline for leaving the EU be extended once again? Would someone prefer a second referendum as May had hinted at in a last second attempt to keep her in office and garnering support from Labour to finally vote for her Brexit deal? Many open questions lead me to my final analysis.

Theresa May will be gone soon, but her successor inherits exactly the same dilemma: How to deliver on the referendum? What's more, there will still be a 1922 Committee; besides, there will always be the European Union. On top of it all there is a highly polarized British society who are losing trust in their elected leaders and only yesterday during elections for the European Parliament gave Nigel Farage's brand-new Brexit Party a sensational victory with May's Conservatives dropping into single-digit territory.

Who started to destroy May's legacy before she even leaves Downing Street? As it stands today, both her archrivals within her own party but, written in all due modesty, she herself must shoulder responsibility for her failures and colossal misconceptions and misjudgments both at home and in Europe.