Deciphering the codes of Russian revisionism under Putin 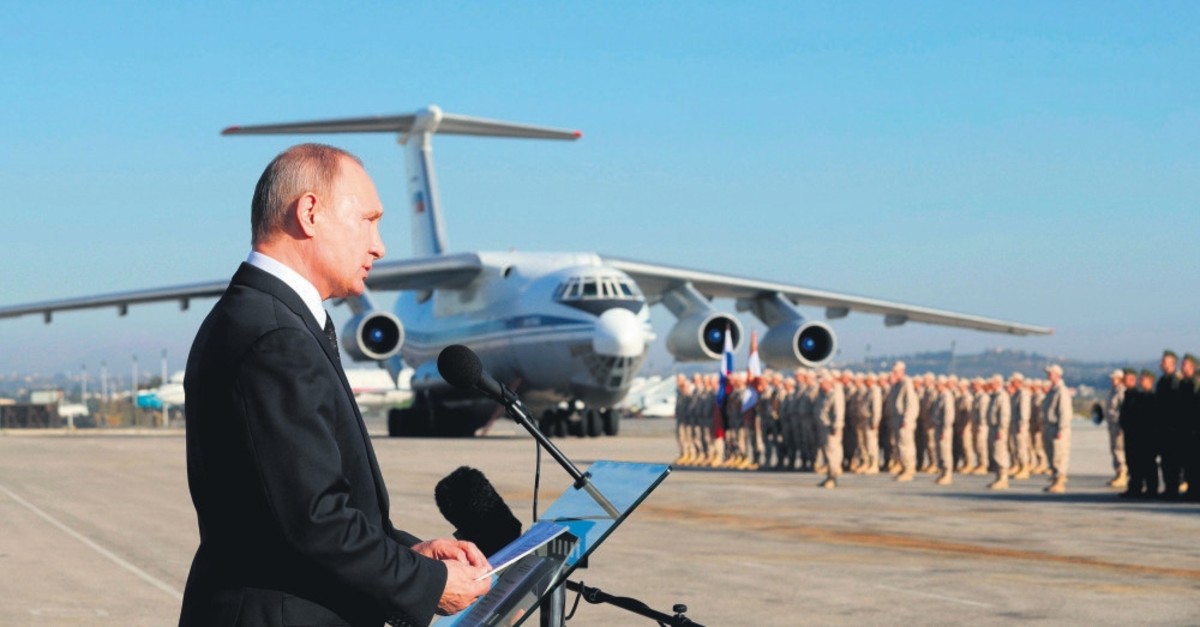 As its economy and international prestige recover, Russia more confidently projects its own distinctive alternatives against Western-centered paradigms

Since President Vladimir Putin came to power in the late 1990s, Russia has been experiencing a national revival. Having an imperial legacy in the background and acting as one of the two superpowers of the Cold War era, it is quite natural and understandable that Russia wants to leave the troubled years of the 1990s behind and put a serious claim to global power status in the emerging century. Putin's Russia has been extremely aghast at the primacy of Western actors in world politics and therefore has been seeking to help bring into existence a multipolar world order in which Russia shapes the course of global developments decisively. The historic talk Putin delivered to the Munich Security Conference in 2017 is now considered by many as the harbinger of Russian desires to hollow out the foundations of the liberal international order in the years to come.

It is a strong Russian conviction that rather than treating Russia as a defeated power and imposing a peace settlement on it, similar to what victorious Western powers did to Germany in the immediate aftermath of World War I, Western powers should have paved the way for Russia's incorporation into the emerging security order in post-Cold War Europe, similar to how post-Napoleonic France had been incorporated into the Concert of Europe in 1815.

In order to voice its strong criticism against Western aggrandizement, Russia needed to recover from its economic malaise under the strong leadership of President Putin. The improving Russian economy and the growing need of Western powers to seek Russia's help in responding to the geopolitical challenges of the post-9/11 era seem to have emboldened Russian leaders to openly air their grievances with respect to the pillars of the liberal international order. Besides, Russian leaders believe that Russia's historical legacy, immense military power capabilities, rich natural resources and huge landmass provide her with the ability help bring into existence a Russia-friendly regional and global order.

Russia turned out to be vehemently against the color revolutions in the post-Soviet region. From Russia's perspective these revolutionary movements were masterminded by Western circles and carried out by local agents. Seen from Moscow, the promotion of democratic values in Russia's near abroad cannot be seen isolated from the geopolitical competition between Russia and the West.

For some time, Russia has been in the international limelight due to its support for ethnic separatists in Georgia and eastern Ukraine, its incorporation of Crimea into its territory, its strong backing of the Assad regime in Syria and the hybrid tools that it employs to wage political warfare against Western liberal democracies. Hardly a day passes without Russia being accused by Western circles of pursuing aggressive, assertive and neo-imperial policies in its near abroad.

Lean toward the East

However, despite the growing strategic rapprochement between Moscow and Beijing in recent years, one should not conclude that these countries want to establish a military alliance like NATO. The closer Russia comes to China, the stronger the Russian message that Russia is not without alternatives. Active Russian agency in the establishment of the Eurasian Economic Union, the Shanghai Cooperation Organization and BRICSs (Brazil, Russia, India, China and South Africa) should be read as Russia's growing determination to soft-balance against the West.

Recently, the intensification of the trade war and a Cold War-like confrontation between the United States and China seem to have added up to Russia's geopolitical clout because this time China appears to be quite willing to improve its relations with Russia. The recent visit of Chinese President Xi Jinping to Russia in the early June of 2019 has undoubtedly demonstrated that these two countries have now entered into a new stage in their relations, with strategic considerations shaping the tenor of their relations more decisively than ever.

Despite some counterfactual arguments, it seems that Western powers promised Russia not to enlarge NATO eastwards in return for Russia's acquiescence to Germany's unification and its eventual accession to NATO. However, this is not what has transpired. Therefore, a strong feeling of disillusionment, containment, and encirclement reigns in today's Russia. The Yeltsin era during the 1990s did not witness a serious breach in Russia's relations with the West mainly because Russia was weak and the then ruling elites saw westernization as the only route to modernization and development.

Unlike the developed Western economies that are built on capitalist values, the Russian economy very much relies on the export of commodities in a semi-closed economy, such as gas and oil. The idea that capitalist economic modernization would eventually culminate in political liberalization and democratization does not strike a sympathetic chord with Russia. Russia seems to have adopted a mercantilist economic model in which many economic activities are closely regulated and monitored by the state and economic power is a means to the state's political and strategic influence at home and abroad.

Unlike many Western powers where postmodern ways of arranging state-society relations have taken deep roots and where issues of security mostly concern low-politics issues, Russia offers an example of traditional nation-states that tend to define security through the lenses of sovereignty, survival and territorial integrity.

Russia defines itself as a "sovereign democracy" and abhors Western attempts at preaching the virtues of liberal democracy and universal human rights. From a Russian perspective, historical experiences, geopolitical realities and cultural values produce different conceptualizations of democracy across the globe. Putting the idea of universal human rights at the center of global politics and authorizing the United Nations or other regional security organizations to help organize multinational peace operations in conflict-riven places contradicts Russia's state-oriented security and diplomatic culture. Russian uneasiness with such multilateral UN-led operations can be seen in Kosovo in 1999 and Libya in 2011. The Russian position on the Syrian crisis also reveals that the principle of not interfering with states' internal affairs, no matter how severe the internal conditions are, still colors Russia's international behaviors. Russian rulers do not want to see the principle of "responsibility to protect" drive international involvement in conflict-riven places.

Recent years have also witnessed that President Putin has been vociferously arguing in favor of the revival of Russian nationalism imbued with distinctive legacies of communism and Orthodox Christianity. Ascribing a historic mission to Russia, Russian leaders believe that Russia is the most important defender of Western civilization against the corrosive impact of extreme consumerist, self-centric and hedonistic values on predominantly Christian societies.

Moreover, it is also believed that the Russian society is built on the primacy of patriarchal and traditional communal values instead of self-regarding individualistic morality. Russian society evinces a predisposition to communitarian ethics over individualistic or cosmopolitan ethics. That is to say that the meaning of life of an ordinary Russian emanates from his/her belonging to the larger Russian community in which common societal values take priority over individual quest for happiness and well-being.

Russia's approach to the liberal world order is informed, among others, by the historical dynamics of its relations with the Western international community. On one hand exists a strong pro-western tradition in Russian culture and history, according to which the road to modernity and development goes through Russia's acceptance of Western values and practices. On the other hand a strong resistance to the West also exists in Russian history, whose most exemplary manifestation took place during the Cold War era. Here Russia is defined as the anti-thesis of the West and its liberal values.

Finally, the so-called Eurasian school of thought sits somewhere in the middle of these two polar positions. According to Eurasianism, Russia is both a European and Asian country at the same time and Russia's historical mission is to unite the diverse communities in the Eurasian region under Russia's moral and political leadership. Russia is the geopolitical hegemon of the Eurasian region and without strong Russian leadership neither Russia nor other Eurasian communities would be in a position to restrain western and eastern encroachments. Given Russia's foreign and security polices over the last decade, one can argue that Eurasianism has already become the dominant geopolitical school of thought in Russia.

Russian elites are quite keen on the point that Western values are not superior to Russian values. Therefore, whenever Westerners question Russia's place in the West and adopt a condescending view on Russian values, Russian apposition to the Western international order climbs up. This appears to explain why Putin's regime is trying to boost Russian self-confidence by investing a lot on rewriting national history and offering patriotic education in schools. For example, Russian schools books highlight victories against Napoleon's France and Hitler's Germany in such a way to help reconstruct Russian national identity in the emerging century.

In the emerging century in which realpolitik security practices are likely to gain more salience and hard power capabilities are to become more critical in the context of geopolitical rivalries, many will continue to probe into Russia's global aspirations.