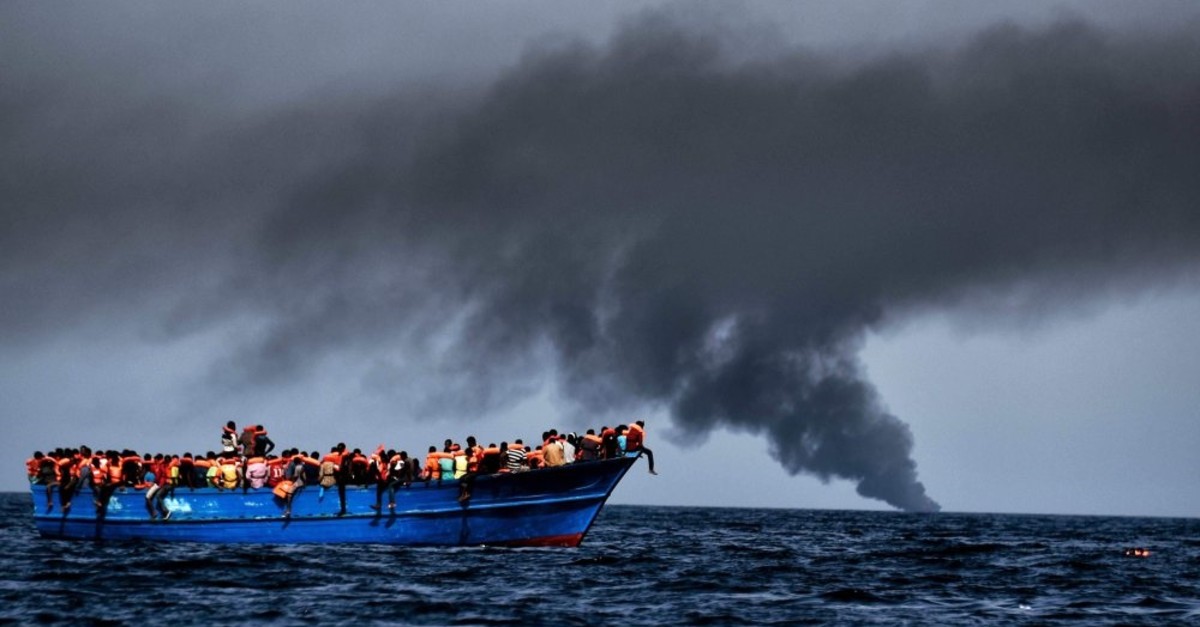 Migrants wait to be rescued by Italian authorities as they drift in the Mediterranean Sea some 20 nautical miles north off the coast of Libya, October 3, 2016.
by Maria Beat
Jun 20, 2019 12:01 am

Starting as a coal and steel union, the modern European Union is overwhelmed with political discourses, conflicting aspirations and growing disagreements. Over the years since the 1957 Treaty of Rome, an image of community to bring prosperity and happiness has been overshadowed and the economic foundation, once solid, has experienced a crack. Cherished liberal and democratic values and the propagation of tolerance and multiculturalism have generated an unexpected and weird result: the raising of euro-integration opponents and far-right nationalists to power.

The results of the recent European elections confirm the sad but awaited truth: Business as usual doesn't work for the EU anymore. Hungary gave an astounding 52% support to the national-conservative party of Prime Minister Viktor Orban. More than 30% of Brits chose the Brexit Party of Nigel Farage, which was established on the eve of elections and hardly has a coherent program. In Italy and France opponents of euro-integration and the far right emerged on top as well.

The electorate stepping back from the mainstream and traditionalist parties and a rise in nationalism is a reaction to the general drop in living standards and the overall inability of the EU to cope with an avalanche of problems aggravated these days by the refugee influx.

Cooperation is a fragile and delicate process, and it works best when economic prosperity is on the rise. At the end of the '50s, the process looked promising as a foundation for euro-integration that respected universal civil freedoms and humanitarian values to build a successful commonwealth of nations. It gave the emerging European Union an image of a dreamland that garnered the attraction of millions in desperate search for a better life in an impeccable society.

Europe was wholeheartedly meeting those from distant lands by revealing tolerance for their lifestyle and appreciation of their national tradition in pursuit of building its community based on respect for personal dignity and multiculturalism. Also, EU economies were comfortably using those largely coming from the Middle East and Southeastern Asia as cheap labor for their development.

Emerging as a compact and economically sound mechanism, at a certain point the EU became rather driven by political ambition. Mesmerized by the idea to end Europe's division decided by the Great Powers at the Yalta Conference, the EU took a risk by undertaking an unprecedented enlargement in the early 2000s by accepting 10 former Soviet affiliates, namely Bulgaria, the Czech Republic, Estonia, Latvia, Lithuania, Hungary, Poland, Romania, Slovenia and Slovakia jointly with Cyprus and Malta. The EU accepted the post-socialist economies regardless of their lacking compliance with its established accession criteria motivated by political ambition. By doing this, it assumed their donor role, resulting in increased financial burden for the original founders that eventually generated public discontent and protest to evolve into such revolts as the current yellow vests movement in France.

The experienced enlargement has started to dilute the functioning ability of EU mechanisms and impede the decision-making process and overall efficiency. Launched as its follow up, such mechanisms as the Black Sea Synergy, European Neighborhood Policy and Eastern Partnership continue matching the pace, while lacking the capacity to make an actual take off.

An average EU citizen is born in the Middle East, Southeastern Asia or to a lesser extent in Central Europe. All of them take the EU for their home where they live by the rules, expecting the community to provide for their comfortable living.

Enlargement is a magic word in the lexicon of the EU bureaucracy, while the actual process is hardly immune from lop-sided selectivity if not political bias.

Turkey's long-awaited accession is a vivid example. It signed a partnership agreement with the European Economic Community (EEC) in 1963, applied for EU membership in 1987, was officially recognized as a candidate for full membership in 1999 and started the accession talks in 2005. Still, the negotiations were put on hold in 2007 due to the objections of Greece and opposition from Germany and France. Since then, the process has been virtually stalled, and speculation remains strong that the prime reason is Turkey's cultural and religious identity. The recent European Commission's report draws a negative perspective on Turkey's progress in the accession process to cast substantial doubts over the future of Turkey-EU relations and its eventual EU membership.

In the meantime, EU problems keep piling up. Some, like Great Britain's awaited departure, are of a structural nature and would need a domestic remedy. Others, like the on-going refugee crisis, require the assistance of outsiders, Turkey primarily.

In March 2016, the pressure of the refugee influx compelled the EU to strike a deal with Turkey. In line with it, it started sending back to Turkey those who arrived on Greek islands illegally, while accepting legal arrivals from Turkey. The deal also envisaged visa-free entrance to EU countries for Turkish nationals – a provision that is still waiting to be implemented. The agreed upon financial remuneration for Turkey has also run into difficulties and continues waiting to be fully paid. For its part, Turkey has fully complied with its part of the deal to result in substantial reduction of arrivals via its territory. Currently, Turkey hosts around four million Syrian refugees, which is by far the highest number of displaced persons in the world.

In the meantime, the EU migration policy remains vague and unsettled, while it continues trying to pursue its members to agree on migration issues and on comprehensive plan to manage the migrants' inflows. Its task is complicated by a lack of final clarity on what is meant by "refugee" or "migrant" that is still to be given by international agencies and the U.N. in particular. As a result, a crisis erupts every time a boat with asylum seekers from Africa or the Middle East arrives at Europe's doorstep, while protection procedures vary on a case-by-case basis.

This January alone, 49 migrants rescued by nongovernmental organization (NGO) boats in the Mediterranean were stranded at sea for three weeks waiting for a handful of EU countries to decide which of them would let them disembark. Cases like that make the refugees' plight dire.

A continuous absence of a unified EU strategy on refugees motivates member countries to focus on temporary measures. They usually are health assistance, language support, food and clothes, and temporary shelter and leave the migrants out of the social medium of the hosting country to often prompt them to seek affiliation with paralegal associations engaged in radicalization and criminal activities. As a result, EU countries have started to witness

outbursts of ethnic conflicts, public looting, vandalism and social misbehavior that generate a growing antagonism of locals toward the migrants in certain parts of Germany, France and Greece.

For comparison, a broader scaled Turkish practice provides refugees with assistance in adaption to ease integration into society. The authorities run professional upgrading and retraining programs to help them find employment, provide for the family and become self-sufficient.

The refugee crisis has revealed the limits of EU tolerance and its inherent deficiencies to promptly resolve a dire situation. Today, opinions in the EU differ either to seal the borders for the new arrivals or accept the refugee quotas while the former seeming to gain the upper hand with no horizon for the influx to stop.

Strife for integration is a natural process, though its directions could vary. Brexit has made an unexpected disservice to the EU by undermining the overall solidity of its euro-integration. The development has contributed to reverting the world's attention in the direction of Asia China and India, in particular. In the meantime, Great Britain, a traditional supporter of the euro-Atlanticism approach, may start very soon to center on another integration community considering its fiduciary relations with the current U.S. administration.

In the meantime, euro-integration is increasingly impacted by the increasing cooperation of Russia and China triggered, to a no lesser extent, by sanctions imposed on Russia by the U.S. and the EU in the aftermath of Crimea's annexation in 2014. As of today, they have brought Russia-EU relations to a virtual stalemate, while propelling the Russia-driven integration processes in the direction of Africa, Asia and Latin America. By doing this, the imposed sanctions have indirectly boosted activity of such multilateral cooperation platforms as the BRICS countries, the Shanghai Cooperation Organization (SCO) and the Eurasian Economic Union (EEU).

Turkey is an active supporter and contributor to the newly emerging integration processes, while continuing its pursuit of joining the EU, which falls in line with the multi-vector direction of its foreign policy initiatives. For Turkey, the Black Sea Economic Cooperation Organization (BSEC) headquartered in Istanbul may become another instrumental platform for multilateral interaction. In the meantime, the embodied potential of this fully-fledged economic cooperation organization remains sleeping as of today.