Palestinians can thwart the 'deal of the century' 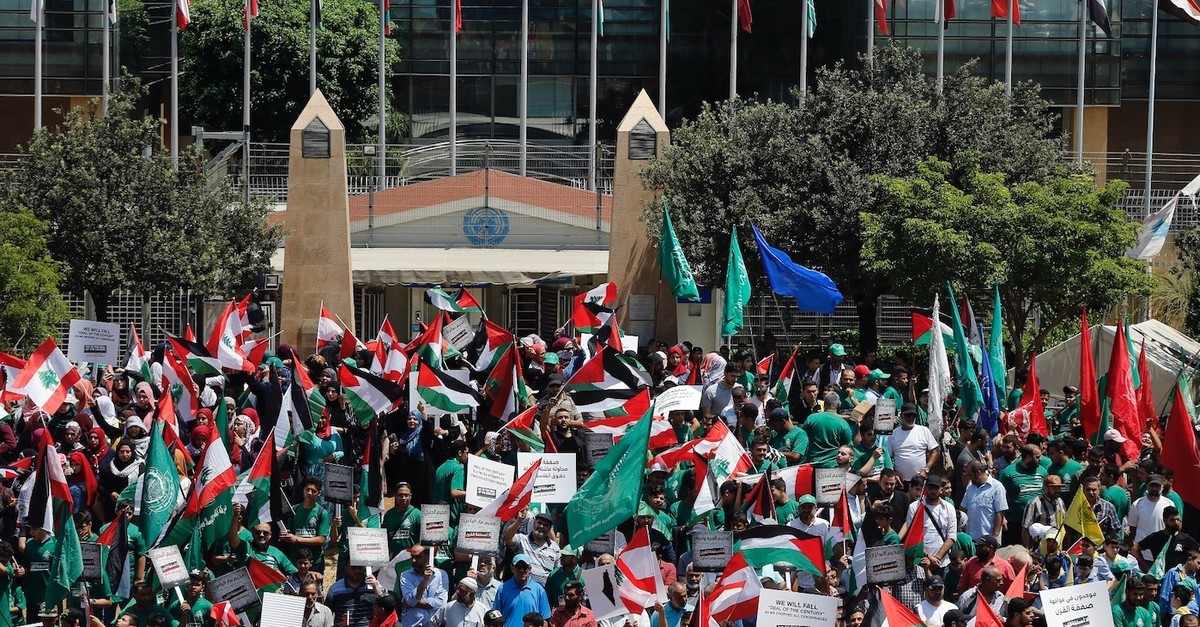 Palestinians hold Lebanese, Palestinian and Hamas flags during a demonstration against a U.S.-sponsored Middle East economic workshop in Bahrain, in front of the United Nations headquarters in Beirut, Lebanon, June 25, 2019.
by Ali Abo Rezeg Jun 28, 2019 12:06 am

Palestinians can thwart the infamous 'Deal of the Century' plan by reactivating their popular resistance methods; most specifically, the creative resistance we saw in the Great March of Return

With the U.S.-led workshop held earlier in the Bahraini capital Manama, it became clear that the so-called "deal of the century" is a mere bid to portray the Palestinian cause as an economic issue being defended by "desperate" Palestinians.

While addressing the participants in the meeting, Jared Kushner, the architect of the pro-Israel deal and U.S. President Donald Trump's son-in-law and senior adviser, didn't say a single word about the Israeli occupation against the Palestinians, alleging that any "economic prosperity" in the region can end the decades-long conflict in the region.

Palestinians, for their part, replied by not attending the meeting, confirming their firm position not to allow the U.S. to have any mediating role in the Palestine-Israel conflict.

This position dates back to late 2017 after the U.S.' notorious recognition of Jerusalem as the capital of Israel and the relocation of its embassy from Tel Aviv to the Palestinian holy city.

At the time, the terms of the deal were still unknown, different Israeli leaks unveiled that it would include unlimited concessions in favor of the Israeli occupation, mostly in Jerusalem, and right of return issues. It would also allow Israel to annex major swathes of the West Bank to implement the "Greater Israel" project.

However, are Palestinians nowadays able to hinder and stop this plan, which comes amid a decade-long Palestinian internal division? It also comes at a time when chaos extends to six or seven Arab capitals, the last of which protests hit another two Arab states – Sudan and Algeria – in an abrupt development many regional observers considered as a second wave of the 2011 Arab Spring.

It is true that Palestinians are fragmented nowadays, and there are two authorities, one in the blockaded Gaza Strip and another in the West Bank. But, Palestinians are extremely united in their rejection of the "deal of the century," which, they say, aims at nothing but liquidating their just cause.

The numerous positions that came from the Ramallah-based authority were almost the same with those issued by the Gaza-based resistance factions. The Palestinian leadership's categorical rejection of the deal refutes claims that Palestinians are still divided.

However, a single political umbrella is needed for Palestinians nowadays to empower them to face these challenges, which could be the most serious since the Israeli occupation of the West Bank and Gaza Strip in 1967. Such an umbrella organization could inject new life in the Palestine Liberation Organization (PLO) by holding general elections and including resistance movements and diaspora-based Palestinians to get the utmost representation.

Palestinians could be able to thwart this plan by reactivating their popular resistance methods; most specifically, the creative resistance we saw in the Great March of Return. The successful Gaza-based model of weekly marches should be copied not only in the West Bank but also in all areas bordering Israel, most importantly, Jordan, Syria and Lebanon. Palestinian groups based in these countries should assume their responsibilities in exerting popular pressure over Israel.

The early Palestinian revolution, which was triggered in the 1960s, came as a result of attempts to terminate the right of Palestinian refugees to return to their homes in historical Palestine. The Great March of Return has been a new way of popular resistance that came in the most appropriate time as Palestinians realized that their inalienable right of return has become vulnerable again.

Palestinians, as well, should spare no effort to confront the U.S. administration worldwide by calling for staging protests in front of U.S. Embassies on the five continents. It is the exact time for popular and joint action as the current U.S. administration has been working, every now and then, to totally terminate the Palestinian cause. Millions of Palestinians, who are scattered worldwide, can easily campaign against Washington's stark bias to the Israeli occupation.

Moreover, it is time for Palestinians to play all the cards they have. Palestinian legal experts should take advantage of being a member of the International Criminal Court (ICC) and sue the Israeli leaders who were involved in committing war crimes and crimes against humanity during Israel's three aggressive actions on the Gaza Strip.

They should also expose any Arab official who took part in the Bahraini conference by asserting that participation in such conferences not only washes Israel's face, but it also emboldens its leaders to commit more crimes against their Palestinian brothers, if they still see them as such.