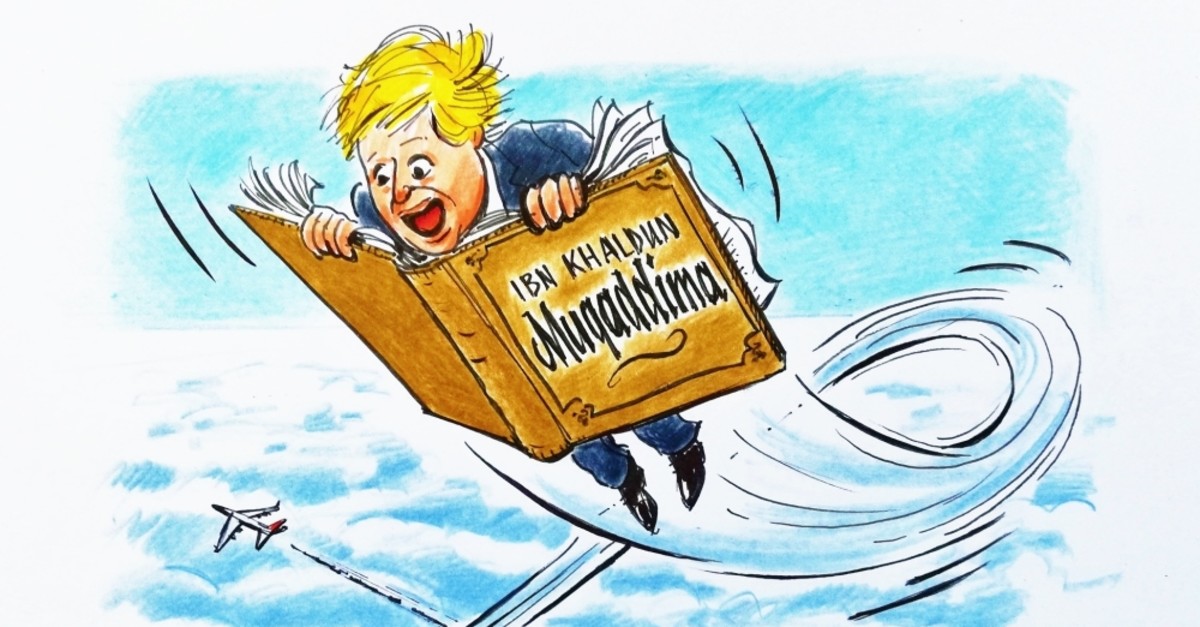 It seems like Johnson and other Brexiteers are attempting to boost the ‘asabiyyah' of the British nation, and preventing the kingdom from falling into a state of senility. Ibn Khaldun wishes them good luck with that!

A discussion on the Oxbridge grading criteria coincided with a video of Boris Johnson referencing Ibn Khaldun, for whatever crazy economic scheme he wants to feed to the British public, on my Twitter feed last week.

The gist of Yascha Mounk's tweets on the Oxonian grading system was that Oxford dons favored essays that had counterintuitive, rhetorical arguments. Having just come out of end of term grading, I can totally see how a bored professor will favor an essay that says something unexpected, having read another 30 essays the day before.

The counterintuitive style suggests that the speaker/writer has read and absorbed all the conventional wisdom and "having seen through" those arguments has gone beyond and discovered the universe anew. But sometimes, as we have seen in the case of Brexit, a bit of conventional wisdom and common sense might be just what Britain is lacking at the moment.

The country is being ruled by Oxbridge men who are locked in a race for the top job, so there's precious little of that. And so when Boris Johnson pops on my timeline and talks about Ibn Khaldun, I see it in the great tradition of the counterintuitive style. A man from Balliol College, Oxford is not going to reference some contemporary economist who has worked on the EU that would make sense to his average audience. He has to dredge up the 14th Century Tunisian scholar to make his point, and he did got that wrong, as people who are more familiar with Ibn Khaldun's economic theory have already pointed out.

But as we know, with Johnson, who cares about content? It's the panache, the wink and nudge way he says Ibn Khaldun, making the "kh" sound as hard as the Brexit he wants to deliver.

Boris Johnson quoting Ibn Khaldun is, in fact, not quite so out of the ordinary as one might think, if we have a closer look at his education and ancestry. Johnson has read "Classics" at Oxford; and as I was told by a Heidelberg professor that Arabic could count toward my Classical language requirement for the Ph.D., Ibn Khaldun should by rights be rubbing shoulders with Aristotle and Plato. He may be more than a 1,000 years their junior, but when you consider his work "Muqaddima," written in 1377, you'll see that he speaks about the same sort of issues that the Greats spoke about. How to run a country, how poetic language helps or hinders state affairs and how the old poets can never be surpassed.

The issue of classics is a very fraught one in the Islamic world, because hardly any one of us read any of them. The issue is doubly fraught in Turkey where Arabic was shunned for many decades. It was in fact in the summer of 2008 that I first saw a copy of Ibn Khaldun's "Muqaddima" ("Prolegomena" in Boris Johnson's preferred classical language) in my life, in the Frank Rosenthal translation.

I was in a mall in Amman, where I was learning Arabic (fusha, naturally) trying to break the curse of Turks being deprived of classical language learning. As I keep saying to friends: When the early Turkish Republic stopped Arabic education of all sorts, we might as well have started learning Greek and Latin, embracing our Anatolian heritage as the plan was – then we too would have politicians like Boris Johnson! Back in 2008 I read the first 100 pages of "Muqaddima," practically the Introduction of the Introduction, which was all about how awful historians were in misreporting past events, not checking sources, etc. except for him of course. As I was writing a Ph.D. at the time, it struck a particular chord with me, and I felt personally attacked for my awful footnoting skills.

I imagine that Johnson must have read several Prolegomena's in his capacity as a Classicist, which makes me wonder if the "Muqaddima" gets taught at Oxbridge. And I don't mean between the lines in a superficial second hand article, but a close reading of the text in the original, as students might read Plato's "Republic" in the Classical Greek. "You are one to talk," I can hear you saying, "Do university students in Istanbul read 'Muqaddima' in the original?"

In response to which I shall of course refer you to the name of the university I work at, yes, a disclaimer this late into the piece is redundant - and we do have reading groups in which professors and students sit down together and read "Muqaddima" in the original, with Turkish and English translations at hand.

This is, it has to be said, far from common in the Turkey of today, but it used to be, so I like to assume, an ordinary sight in Ottoman madrasas, where Ali Kemal, Boris Johnson's great grandfather, would have studied another set of "Classics."

It would of course be highly speculative to imagine that the one heirloom that passed down from Ali Kemal down to Boris Johnson is a tattered copy of the Ottoman statesman "Muqaddima" in Ottoman script. It is, however, much more likely that Johnson has heard of Ibn Khaldun through Ronald Reagan, who quoted the scholar on taxes back in 1981. His influences seem to be coming more from the other side of the Atlantic rather than the Mediterranean basin.

It is of course quite telling that U.S. Republicans and U.K. Conservatives have latched on to Ibn Khaldun quite selectively, seeing in him a champion for reducing taxes. He seems to have been studied more by economists than any other social scientists in Europe and the Americas.

However, his theory of solidarity "asabiyyah," and "senility" of civilizations are just as useful today in making sense of how communities stick together and how prosperous states fall into a state of lethargy, losing all their vigor and combativeness after a couple of generations. Ibn Khaldun seems to say that a state can have too much wealth, and that this is not good for group feeling.

It seems like Johnson and other Brexiteers have taken this to heart and decided to provide the British public with certain privations, so that the "Blitz spirit" they like to refer to can be experienced again: All for boosting the "asabiyyah" of the British nation, and preventing the kingdom from falling into a state of senility. Ibn Khaldun wishes them good luck with that!