July 15 resistance as a democracy lesson and the West's decadence 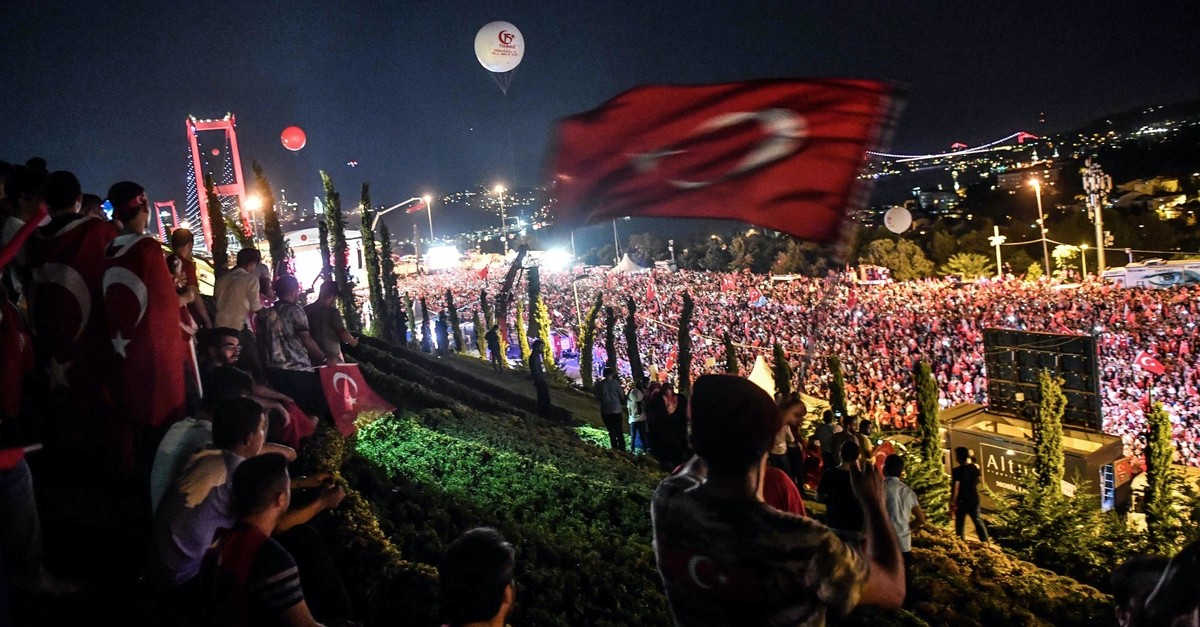 The third anniversary of the July 15 coup and invasion attempt is here. May God spare this country and of course other countries from such intolerable treachery. Just think, you retire to your home for rest, and suddenly F-16s bearing the Turkish flag fly low over our capital and Istanbul, causing sonic booms that sound like bomb explosions. The Bosporus Bridge, later renamed the July 15 Martyrs' Bridge, is closed to traffic by tanks and troops in military uniforms – i.e., by your own soldiers. First, you think that this is a precaution against a terrorist attack. But later on, different reports emerge. In Ankara, the Turkish Grand National Assembly (TGNA), our Parliament, is bombed by F-16s. Special Forces' headquarters, the National Intelligence Organization (MİT) building and the Presidential Complex are also bombed. Tanks are running over those who resist. Bodies are minced and split in half, and the severed head of a citizen is found atop the roof of the Presidential Complex. Horrible!

That night, I was at my home in Istanbul. With my legislative activities for the previous week concluded, I returned to Istanbul. Around 10 p.m., I sensed something strange. I made several telephone calls, but nobody had a clear idea of what was going on. Of course, I also received calls from those outside of Istanbul, but I was similarly puzzled. And soon it turned out that a coup attempt by members of the Gülenist Terror Group (FETÖ), soldiers and other state officials who infiltrated the military and government agencies and affiliated with Fetullah Gülen, who lives under U.S. protection currently, was underway.

Despite little information, I tried to predict what the most critical places might be. I was figuring out what I could do, whether I could be of any help in preventing the invasion of my country. I picked up my sister and drove toward the Justice and Development Party's (AK Party) Istanbul provincial headquarters in Sütlüce. Some friends called and warned me: "Let us take you to a safe place. Since you are known from TV screens, they will kill you." I told them: "I would have done what you said – not for myself but for my country – if I had been an important person who should stay alive. But I'm not. So, if I do not go out tonight, I will suffer from a sense of guilt for the rest of my life."

On the way, I saw lines in Maslak in front of gas stations and at ATMs, and I became angry. Upon learning that tanks of FETÖ's putschists were welcomed with applause along Bağdat Avenue and some other places, I became enraged. But especially the Republican People's Party (CHP), led by Kemal Kılıçdaroğlu who assumed the party's leadership in 2010 after a sex tape plot by FETÖ, had consciously radicalized its followers. As I had watched these processes closely, it did not come as a surprise to me. But what else can sustain a person if he or she loses the love for the motherland or democracy?

I parked the car a little away from the building as a precaution. According to reports, around 80 FETÖ-affiliated soldiers occupied the provincial headquarters. Citizens came to protect the party building. I waded through the crowd and passed to the room of Selim Temurci, the provincial head. It turned out that Temurci went to Atatürk Airport a short while ago to greet President Recep Tayyip Erdoğan. The soldiers tried to capture the building. As thousands of citizens gathered in front of the headquarters, however, they became afraid and moved to the side street. These soldiers were led by majors Faruk Şimşek and Erol Hazıroğlu and captains Gükhan Güney and Hasan Hüseyin Altınsoy. We negotiated with them constantly, either by phone or face-to-face, to persuade them to surrender their arms, and to ensure their safe evacuation and eventual surrender to justice. But both these so-called commanders and their subordinates kept on following orders and instructions received via radio and the progress of the coup, with rounds chambered and ready. I understood that they would carry out a massacre there, if the coup succeeded, if, for example, news of the killing of the president came because it was impossible for them to subdue thousands of people into submission. Everyone took to the streets that night to die for the motherland.

Now let's examine how the U.S. and the EU countries – i.e., our NATO allies, European Council stakeholders, Western media (the "champion" of freedom of thought and expression), and the democratic Western world "as a whole" reacted to that terrible night and the next day as the coup was thwarted. It would be right to evaluate the night of the coup attempt and the following days separately when it became clear that the coup failed, which were quoted by my dear friend Idris Kardaş in his piece:

"Americans in general would not tolerate a military coup. Considering the anti-democratic nature of Erdoğan's regime, however, Turkey may not have another option."(Huffington Post)

"The attempted coup against Turkey's president Recep Tayyip Erdoğan is just the culmination of a long-simmering discontent with Erdoğan, who has been ruling the country since 2002." (Wall Street Journal)

"Erdoğan paved the way for the coup." (Expressen, Sweden)

"The military was fed up with Erdoğan." (Bergens Tidende, Norway)

On the night of the coup attempt, Turkish officials called then-U.S. Ambassador John Bass, a controversial figure, at 11:57 p.m. and asked him to deliver the message to Washington that the Turkish government was expecting support from the U.S. administration. At 12:37 a.m., however, the U.S. secretary of state made that despicable statement: "I hope here will be stability and peace and continuity within Turkey. All parties in Turkey should show restraint and avoid any violence or bloodshed."

Ankara's request for support from the U.S. received a weak response three hours later, when it became clear that President Erdoğan escaped an assassination and that the coup was going to fail, "All parties in Turkey should support the democratically elected government of Turkey."

Although it was daytime in the U.S., and the White House and State Department were following what was happening minute by minute, Washington did not make such a statement for three hours. The U.S. simply waited. President Barack Obama's "unwavering" support came a day later, at 7:31 p.m. on the evening of July 16: "The U.S. reiterates its 'unwavering support' for the democratically elected, civilian government of Turkey."

But a stranger thing also happened that night. Stratfor, a Texas-based geopolitical intelligence firm founded by George Friedman, swiftly pinpointed the exact location of a plane bringing Erdoğan to Istanbul, even as coup-plotters were seeking his location for possible assassination and tweeted three times about its flight path. In the first tweet, Stratfor revealed that Erdoğan's plane was over the Sea of Marmara. In the second, Stratfor reported that Erdoğan's plane was tracked approaching Istanbul and would "likely" land.

In its last tweet, Stratfor wrote that it was confirmed that Erdoğan's plane had landed in Istanbul, including a satellite image showing the location of Ataturk Airport. Contacted by Anadolu Agency (AA), Stratfor officials were evasive when asked how they could pinpoint the exact location of the plane. It's apparent that they did not expect the coup to be defeated.

Now, let's have a look at Western newspapers, those "champions of democracy and freedom of expression," which were upset that the coup failed. Here are excerpts from İdris Kardaş's piece:

Italy's ANSA: "Turkey should respect the rule of law."

Internazionale: "Turkey's democracy is dead no matter which way the crisis ended. It wasn't a very competent coup attempt. The first rule of coup-making is: Arrest or kill the person you are trying to overthrow. The coup leaders should have been able to grab Erdoğan, who was on holiday at the seaside resort of Marmaris, but they didn't."

The Financial Times: "The government has now declared victory, but this is very far from being a victory for Turkish democracy."

The Guardian: "Turkey was already undergoing a slow-motion coup – by Erdoğan, not the army."

The Jerusalem Post: "The failed coup is not likely to change Turkey-Israel relations, but Jerusalem would not have shed a tear had Erdoğan been ousted."

A special place should be reserved for The Washington Post, which has recently published an article by Cemil Bayık, one of the leaders of the PKK terrorist group, which has massacred tens of thousands of people. Two quotes would be enough: "How Erdoğan's anti-democratic government made Turkey ripe for unrest."

"Why the defeated coup in Turkey could make democracy weaker there."

You all know that quote from a notorious article in The New York Times: "Erdoğan supporters are sheep and they will follow whatever he says."

The Independent: "Turkey's coup may have failed – but history shows it won't be long before another one succeeds. Two thousand or so arrests are quite a coup for Erdoğan – rather larger, in fact, than the coup the army planned for him."

FETÖ has used religious and educational initiatives as a shield for the last 60 years, evolving into a Gladio (a clandestine NATO intelligence and operation network) structure. It is obvious who is behind this organization. What's also evident is that the West wanted this coup. That an independent Turkey freed from the clutches of Gladio structures and acting as an equal partner is not desired is equally true. Sadly, we have seen that democracy is a mere detail, a screen, for these countries, their think tanks and media. The same countries have portrayed Egyptian President Abdel-Fattah el-Sissi, a murderer who not only killed an elected president but also massacred thousands of civilians, as a champion of democracy. The EU attended a summit in Egypt just after nine young men were executed following unfair trials based on confessions extracted under torture.

According to philosopher Immanuel Kant, to be civilized means having a sense of shame on proper occasions. Kant's ideal man is an honorable and dignified human being endowed with reason and free will.

Polish historian and philosopher Leszek Kolakowski's following remark in "Europe's Modernity on Endless Trial" is relevant: "We might quite plausibly claim that Europe, at the same time as she acquired, perhaps largely thanks to the Ottoman threat, a clear consciousness of her own cultural identity, also began to question the superiority of her values, thus setting in motion the process of endless self-criticism which was to become the source not only of her strength but of her various weaknesses and vulnerability. This capacity to doubt herself, to abandon – albeit in the face of strong resistance – her self-assurance and self-satisfaction, lies at the heart of Europe's development as a spiritual force."

The West's decadence as a whole regarding democracy, and its complacency with that, is alarming. The July 15 coup attempt showed this once again. And the practices that inspire hope in the name of democracy in the 21st century come from Turkey. We have defeated a brutal coup at the cost of at least 250 dead and through the courage of millions of citizens, in a peaceful way. While Europeans were not able to agree on how many refugees to take in, we admitted nearly 4 million refugees and provided them with the best conditions possible. Turkey is currently the most generous foreign aid donor in terms of the share of its GDP.

And they still say Erdoğan is a dictator. Nonsense!