Can the F-35 crisis be turned into an opportunity? 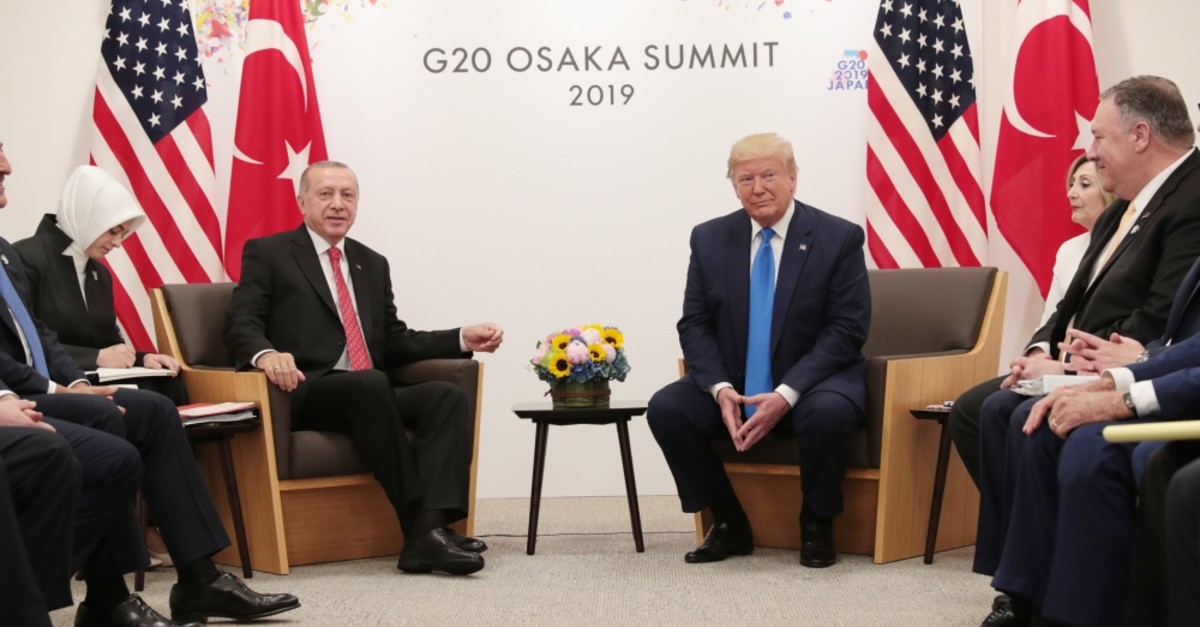 Solving the F-35 crisis would serve to put Turkey-U.S. relations back on track and provide a positive platform where the two allies could find an opportunity to respect one another's national security concerns and demands

In this column I have been writing about the S-400 issue for a long time. It seems to me that recent developments have made it necessary for me to write another piece about the S-400s. Yes, as I have asserted on numerous occasions (since I'm a lawmaker from the ruling party, it would not be an exaggeration to also say "I informed" readers), the components of the S-400 air and missile defense system were delivered to Turkey.

The system will be fully operational by April 2020. Thus, at last, Turkey will be able to protect itself against air threats from beyond its borders. It's a shame on our NATO allies, particularly the U.S., that Turkey had long been left without an air defense, although it sits beside the Middle East and shares a maritime border with Russia.

What's worse, during the heat of the Syrian war, the allies withdrew Patriot missile batteries temporarily deployed in Turkey. Despite that, Ankara has faced every kind of threat to deter it from buying the S-400s. In fact, this defies understanding.

At the latest G20 summit, even U.S. President Donald Trump mentioned this oddity. The U.S., or at least a certain part of the U.S. government, has tried to deflect criticism over this blatant injustice by portraying it as Turkey's treachery, unreliability, or its unruliness, to say the least.

A multipronged campaign was launched to force Turkey to backtrack. U.S. apologists inside Turkey strove to create the impression that there was a debate or a rift in the country over the issue. The Republican People's Party (CHP), the Good Party (İP) and, of course, the Peoples' Democratic Party (HDP), the PKK's political wing, have willingly advanced this campaign. They have produced many scenarios, saying that Turkey cannot back down but at the same time will be unable to use the S-400s in the face of U.S. threats. It was a plot intended to pressure the government.

The claims over deployment

Turkey, they claimed, will buy the missiles but deploy them in Qatar or Azerbaijan, or keep them in a depot. Reports like "Ankara contemplates these alternatives" were published in the media. In parallel, the U.S. has kept on making threats. In other words, both the threats and the solution came from the same center. The intention was to pressure Ankara and manipulate the public at the same time.

But nearly 70% of Turkish citizens supported the purchase of the S-400s. President Recep Tayyip Erdoğan, Defense Minister Hulusi Akar and Foreign Minister Mevlüt Çavuşoğlu have repeatedly said that the purchase of the S-400s is a done deal. And finally, the first cargo planes carrying S-400s hit the tarmac at Mürted Air Base, immediately before the third anniversary of the heinous coup and invasion attempt staged by the Gülenist Terror Group (FETÖ). Mürted Air Base, the headquarters of FETÖ's putschists, has symbolic importance.

President Trump demonstrated the most reasonable stance on the issue. His first statement after the commencement of the delivery of missile systems was again balanced. Trump reiterated that Turkey was not treated fairly and said, "I'm not looking at sanctions right now." Later, his discourse on sanctions changed a bit. Turkey was excluded from the F-35 project and training for Turkish personnel at U.S. bases was stopped.

For the moment, the issue seems to have reached a sort of equilibrium in this manner. Of course, if President Trump faces too much pressure over the issue, he may reluctantly agree to a compromise on the Countering America's Adversaries Through Sanctions Act (CAATSA). We will see how it unfolds. Whatever the U.S. chooses to do, however, we can definitely say this for Ankara: Turkey will make the S-400s operational by April in any case, and make no mistake, will use the system for defense purposes.

As for the F-35 issue, legally the U.S. cannot exclude Turkey since it is a partner in the project. To put it differently, such a move is not compatible with international law. If the U.S. is to avoid becoming a country that violates laws and is seen as unreliable by its allies, it has to ponder the issue of exclusion.

Turkey cannot accept this attitude. The U.S. denied an air defense system to its NATO ally and has excluded it from a joint fighter jet project. And it did this even though Turkey paid a huge sum in advance (for the F-35) and despite the fact that 932 parts for the fighter jet are produced in Turkey. This is definitely inadmissible. Turkey will pursue the issue in the context of both international law and the principle of reciprocity.

Yet the issue goes beyond that. What does the U.S. want to do? Turkey bought the S-400s from Russia because the U.S. had not sold them Patriot missiles. And now, is it going to be forced to buy fighter jets from Russia to make up for the loss of the F-35s?

How can you both push around Turkey and show hostility toward it and oppose it seeking alternatives at the same time? Turkey is a NATO member fulfilling its duties and obligations, and a lauded one at that, with its flawless record of meeting the relevant military and financial requirements. So, why does it face enmity when it needs support and assistance?

What is the U.S. really trying to do? Rational American officials have to ask this question and give more serious answers. What does the suspension of Turkey from the F-35 program mean, other than saying, "Go and buy fighter jets from Russia or China?" If this happens, a new crisis will break out and push NATO into a more critical deadlock. If Turkey does not buy another warplane in place of the F-35, however, NATO's southern flank will face significant risks.

It is apparent that these attitudes are beneath the U.S., which claims to be a democratic state of law, and will bring about a lose-lose situation no matter what logic is behind it. These choices by the U.S. are obviously shaped by Israel. But they will bring no benefit to Israel. Israel's extremist government thinks the picture that emerged in the wake of the Arab Spring presents an opportunity for annexing Palestine. Egypt, Saudi Arabia and the United Arab Emirates (UAE) appear to be made to toe the line. As a result, Erdoğan's Turkey, which is still arguing for a two-state solution and is set to oppose most vehemently any fait accompli like the so-called "deal of the century," is hated.

Again, Turkey also blocks the creation of a puppet Kurdish (actually a PKK-ruled) statelet that is aimed at containing Turkey. There are also other points to be mentioned but these are the main fault lines. Without doubt, the energy reserves in the Eastern Mediterranean are also an issue. But I believe that it can be overcome through a win-win formula. Otherwise, Turkey would not let others expropriate the resources there. And now, the desired solution to all these issues is Erdoğan's overthrow through a coup or another undemocratic method, and his eventual replacement by a puppet government like in Egypt that is ready to do everything demanded of it. In fact, I believe that these efforts began with the "One Minute!" crisis in 2009.

The U.S. protection of terrorist leader Fetullah Gülen along with initiatives to help the PKK carve out a statelet in Syria have destroyed the image of the U.S. as a democratic superpower and a reliable and predictable partner. Hence, it is widely believed in Turkey that NATO and the U.S. were behind the July 15 coup attempt and that FETÖ is just a pawn. Except for President Trump, every statement and every attitude by the U.S. has just strengthened, instead of weakened, this opinion so far. This is difficult to grasp. It is as if a secret plan is underway to lose Turkey.

What lies behind this inexplicable attitude is the common perception of Turkey in the U.S. Turkey is still seen as a fragile country that joined NATO in 1952. To say it openly, it is treated as, if not a banana republic, an incompetent state.

Certainly, the U.S. itself has also changed over time. For a long time, it has relied on the principle of unilateralism with its economic and military power, being carried away by a mood that regards its partners as a drag. Whereas, Turkey had never been a burden on the U.S. like Europe, but as opposed to pampered European allies, shouldered too much as a firm ally for too little in return.

The real problem is the pointless insistence within the U.S. government to refuse to establish a new relationship with Turkey. Turkey aims to be an equal partner of the U.S., not its outpost in the region. An equal relationship is Turkey's ground rule, on which it will never allow a compromise. The recent S-400 issue has probably been another proof of it.

We can keep on trying. Surely, Turkey has suffered, is still suffering and will suffer damages. It is prepared to take every risk for sovereignty. But Turkey is also aware of its strengths. It makes note of all damage inflicted on it, and when the time comes, it will remind its interlocutors and demand compensation. Otherwise, it would not be a genuine state but an Egypt or the UAE.

Turkey will make up for the loss of the F-35s in some way. But the U.S. should think thoroughly about the price of hurting and tiring Turkey so much. For the U.S., EU and Israel, Turkey is a uniquely secular Muslim country with which they can work in every area as long as they respect its sovereignty and interests.

President Erdoğan and the political style he has established in Turkey represent an organic and rational type of politics. Instigating coups in other countries and using clandestine organizations like FETÖ and terrorist groups like the PKK would only bring disaster to the world. The U.S. is losing its democratic shine, which is much more potent and valuable than its military and economic might.

Behind that sheen is the splendid history of the U.S. and some universal principles, in which the founding fathers believed and for which presidents Lincoln and Kennedy even sacrificed their lives. Current U.S. relations with Turkey are not compatible with these values, and do not seem rational even from the perspective of pragmatic reason. We hope that the F-35 issue is solved in a manner that gives rise to a new relationship. Anyway, no one is dreaming of a problem-free world. Otherwise, life will have its own way and things will take their natural course.