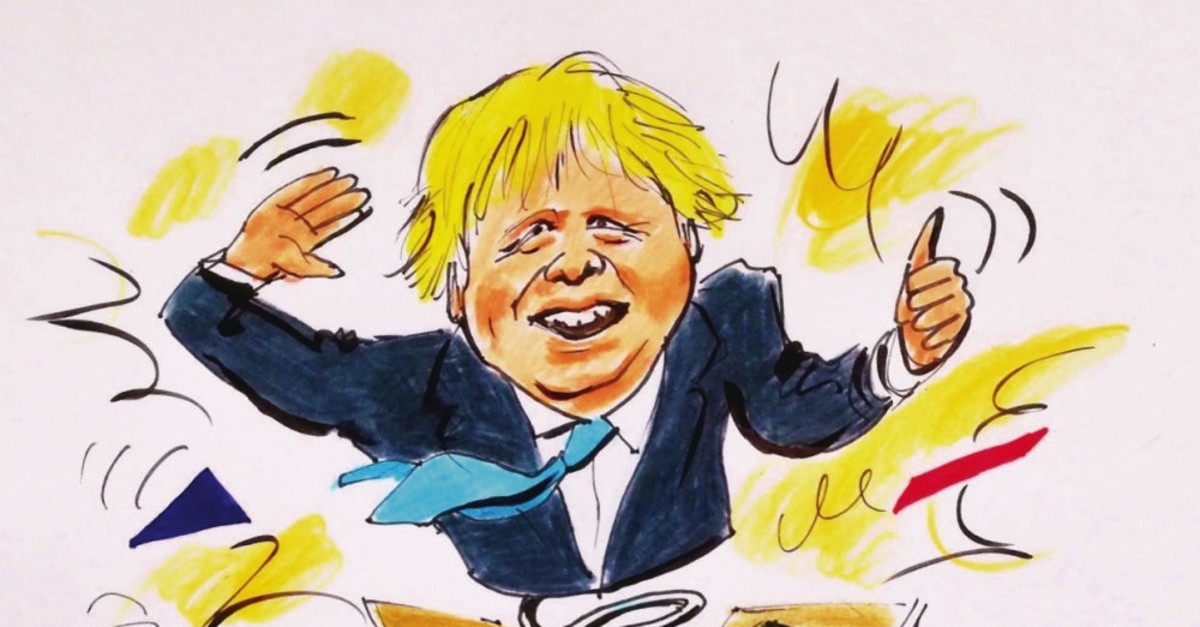 Those who think Britain's new Prime Minister Boris Johnson has a secret, crazy plan to sort out the Brexit mess are wrong. The crazy plan was to enter Downing Street, and this is where it ends. He will fail if he asks Brussels to renegotiate the current deal. He will fail, too, if he refuses to do so as there is no majority in Parliament for a "no-deal Brexit." And he will fail anyways if he turns 180 degrees and asks Brussels for just another extension as then his own party will see him off – which might be a good solution as Brexit would perhaps be seen off, too.

Disclaimer: these are not the words of the author of this analysis, but a personal summary and translation of commentary published by Germany's mainstream television station ARD early on July 24, 2019.

No small verbal fry, so to speak. Basically what this leading media organ wants its viewers and readers to believe is that whatever Johnson does regarding Brexit will amount to nothing and that, perhaps, the best solution would be for his own party to remove him from power and thus in all likelihood, remove Brexit from the political agenda, too. Written before he even had had his chance to enter Downing Street Number 10 as its new resident: "Has Boris Johnson bashing replaced Turkey bashing?"

Now let us set the United Kingdom aside for a paragraph or two and engage in a comparison of sorts. When examining the online version of the news program this week, observers were automatically reminded of the harsh rhetoric normally employed by this and other European media houses vis-à-vis modern Turkey. More objective commentators who follow Turkish developments either from within Turkey or from abroad are used to these unfair remarks implying that whatever modern Turkey does is wrong: Turkey has an authoritarian leadership; Turkey is no democracy; Turkey this and Turkey that; and of course, as always, a few lines about President Recep Tayyip Erdoğan, whom many European "Turkey experts" so illogically and absurdly profess to hate no matter what he does. Without directly saying it, some of these remarks could easily be interpreted as asking for regime change.

Could it be considered meddling in the internal affairs of a proud nation-state or its freedom of expression? The choice is yours to make as our esteemed readers.

Who is afraid of Brexit then?

If one could measure seismic tremors of a political kind in and around the European Union's Brussels headquarters, the needle would exceed all peaks previously recorded. At stake: Britain having to deal with the situation if the EU does not agree to talk with London about how best to come away with a two-way, win-win situation since the United Kingdom is leaving on the last day of October 2019, not 2029. And the latter scenario is what makes one hear the Brussels elites' alarm bells ringing ever more loudly.

With Theresa May no longer in office and regardless of a hung Parliament in Westminster, it is a fact that Boris Johnson is entering Downing Street Number 10 as a politician who does not normally take no for an answer. Polls already indicate that should he deliver Brexit in whatever format by the end of October of this year, his Conservative Party would come out on top should there be early general elections – a sensational potential development after such a catastrophic performance at the ballot boxes more recently. With this in mind and many new Cabinet members having been chosen by Johnson, we shall return to this point in the following section. It seems ever more certain that Johnson will try his best to present a deal in whatever format, but if the opposite outcome materializes, he will not shy away from taking the no-deal route either. Yes, Parliament has voted against a no-deal Brexit before, but who knows what a new prime minister and new Cabinet could manage to achieve in cross-party negotiations?

Could Johnson reunite his deeply divided Conservative Party and at the same time unite the country behind the notion of a strong, independent Britain finally delivering on the 2016 referendum results?

First, this Wednesday while following developments live, some fellow commentators argued that the new Cabinet would be a "leave" Cabinet. Granted, with high profile pro-Brexit personalities now part of the command center of the government pushing Brexit through seems much more likely than under May, who until her final hours as prime minister was by many regarded as a "remainer" who had no choice but to support Brexit to become prime minister in the first place. Think Dominic Raab, as the new foreign secretary, or consider Michael Gove as chancellor and as head of the new no-deal Brexit planning unit. In total, 17 senior government figures either resigned or are no longer needed under Johnson, an almost complete reshuffle indeed. Yet, Johnson will be very well aware of the necessity of seeking a compromise of some form with the opposition and should he really plan to prorogue Parliament so that he could determine which Brexit the U.K. chooses, Queen Elizabeth II would need to give consent and legal analysts already warned Johnson of such an attempt as it would put the Queen in an extremely delicate constitutional position.

Secondly, and mostly completely misinterpreted by continental media, there is the misperception that even if there is a no-deal Brexit, EU citizens currently living in the U.K. would lose their residency rights. Johnson set the record straight in his very first public speech as prime minister, labeling it false. On the contrary, for the first time EU citizens will have their legal rights certified via a settlement scheme, which is already up and running and can even be started via a mobile phone application. Previously, EU citizens simply arrived and stayed while U.K. citizens moving to other EU countries had to apply for residency papers that in return gave them the same documented rights as their EU neighbors. In the U.K. and from the perspective of EU citizens, this process was missing.

Third, even if there is a no-deal Brexit, at some stage the EU would sit down with London and talk about a trade arrangement of some proportions. Elected politicians or unelected civil servants may not prefer such a move, but their respective industry bosses for sure will insist on it. It may no longer be a kind of customs union but will most definitely a balanced EU-U.K. trade agreement. Boris Johnson knows this too; hence, he has good verbal and factual ammunition ready to tell his electorate that even if there is a no-deal Brexit, we will continue to trade with our European neighbors and vice-versa.

Finally, assuming there will be a deal of some sort, it will need to resolve the issue of the Irish backstop. In particular, a government under Johnson will not tolerate an unspecified period of time in which either Northern Ireland alone, or the entire United Kingdom, will maintain any form of a customs union with the EU.

What about objective journalism?

Every author has her or his own views on world affairs, and rightly so. Yet there is a huge difference in whether we publish an opinion article or are tasked with analyzing breaking news. The former can at least to some extent be based on assumptions to stimulate debate; yet the latter must ideally be based on facts.

On the downside, waking up in London as an expatriate and consulting your home nation's leading media organs warning you about that your future as a U.K. resident is at risk because of Brexit could lead some to actually believe it and pack their bags.

Yet, there is a much bigger upside – few expatriates would ever trust such fake news because they actually live on location.

Which brings us back to the very first words of this contribution: Has Johnson bashing replaced Turkey bashing? Unfortunately, no. It has simply become a parallel issue. The sad truth is that whoever and whatever dares to present a strong, powerful and proud alternative to the current EU inner workings is automatically sidelined, categorized as a serious threat to the continent's welfare. A strong Britain outside the EU and a strong Turkey inside the EU are both bitter pills for all those who prefer to belittle entire nations and their fine citizens to swallow. This is not journalism. This is cheap propaganda.