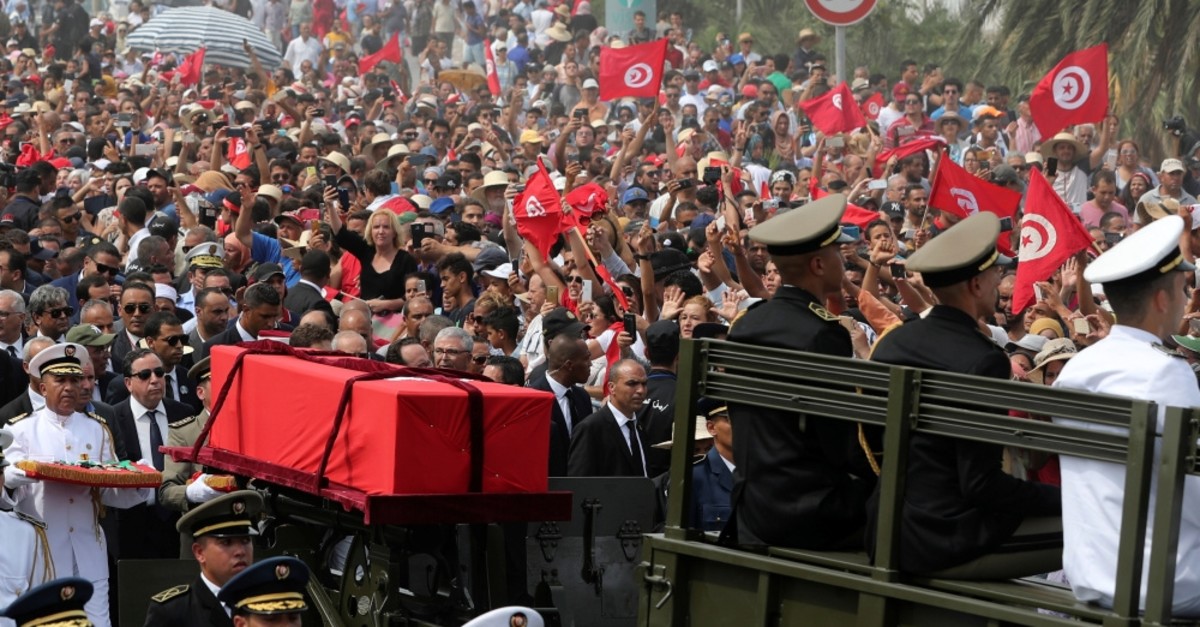 After the death of Tunisia's first democratically elected president, Beji Caid Essebsi, the lack of a great figure in Tunisian politics and Tunisian modernization may create instability, new political forces, alliances and opponents in politics

Tunisia has witnessed rising worries concerning legal procedures allowing the transition of power to a new president since the day Essebsi's health worsened and he had to be taken to a military hospital. The indecision and disagreement in the Tunisian parliament concerning the functionality of the Constitutional Court seemed to look very costly, as it could have risked eight years for a democratic transition. People's worries went further, questioning whether this authority gap could lead the country to division and instability, thus jeopardizing the peaceful conclusion of the planned coming presidential election expected in November.

Luckily for Tunisia, the constitution has managed to ensure a peaceful transfer of power to Parliament Speaker Mohamed Ennaceur, who was sworn in as interim president. For its part, the electoral commission announced an early presidential election for Sept. 15, two months ahead of schedule because the constitution says a new president must be chosen within 90 days.

Legacy in the democratic transition

Some see that the peaceful transfer of power that took only a few hours after Essebsi's death is itself a legacy he left for the country and proof of his ability along with other key political figures of directing Tunisia on a stable path for democracy since 2011.

After ousting Ben Ali from power in the 2011 uprisings, Essebsi became interim prime minister on Feb. 27 that year. Following a different track from those in other Arab spring countries, Beji passed the power to his "Islamist" opponent Hamadi Jebeli in December 2011.

Politicians from divergent ideologies recognize that despite their difference with some of his old policies, Beji helped draft a new democratic constitution guaranteeing fundamental rights, such as freedom of speech, and succeeded in stabilizing Tunisia for its first free elections.

In 2012, Beji Caid Essebsi or Bajbouj, as the Tunisian public calls him, founded the secular Nidaa Tounes party, a diverse party made up of business leaders, intellectuals, unionists, leftist militants and members of the old regime. Two years later, on Dec. 31, Essebsi became Tunisia's first democratically elected head of state.

Tunisians differ in their assessment of the five-year performance of Beji Caid Essebsi in Carthage Palace. But the majority of observers in the regime and the opposition note that among the strengths of the leader was his ability to reconcile his modernist and secular positions with those of Islamic parties through policies of "consensus" and "national unity." Many of his followers today praise him for co-brokering a historic power-sharing deal between his Nidaa Tounes movement and Ennahda that helped steady the country at a time when the MENA region was torn apart by upheaval and wars.

This consensus policy has enabled Tunisia to avoid division, confrontation and make the country a successful example for other Arab states to follow.

In general, Beji's policies were seen as unifying; however, assessments of the outcome of his consensus policy are still debated in his own party, which has been torn apart for many reasons, including the disagreement of some of its leaders on Beji's alliance with "political Islam" leaders.

That being said, others consider that Caid Essebsi's policies were ultimately unable to bring prosperity or lasting calm to a country with economic crises and social challenges.

Beji Caid Essebsi was among the key political figures that guided and influenced the direction of Tunisian politics for the past 70 years. His role was witnessed before the 1956 Tunisian independence, then under both Habib Bourguiba (1956-1987) and Zin Alabidine Ben Ali (1987-2011) regimes and carried on after the 2011 Jasmine revolution.

In 1952 Essebsi started his political career as a lawyer, which paved the way for his rapprochement with human rights activists and political leaders, including among the secretary-general of the Constitutionalist Party and a main leader in the National Movement – Saleh Ben Youssef.

Essebsi joined the socialist, pro-independence Néo-Destour party, the constitutionalist party. Habib Bourguiba, Essebsi's idol, became president of Tunisia in 1957 and appointed him in the first independence government as a central director in the prime ministry. In the 1960s he was assigned as a general director of national security, an interior minister and then a defense minister.

These great responsibilities enabled him to be close to Habib Bourguiba during his battles with his opponents, supporters of the dissident Secretary-General Saleh Ben Youssef, nationalists and leftists.

However, after the ruling party's convention in 1971, Essebsi sided with liberal opponents of Bourguiba's policies in the ruling party, leading to his expulsion along with other opposition figures headed by former Justice and Interior Minister Ahmed Mestiri.

In the late 1970s, with the party's dissidents, he helped establish the first nucleus of the Liberal opposition and nongovernmental human rights organizations. Bourguiba, however, brought Beji back into the government and appointed him a foreign minister during the reign of Liberal Prime Minister Mohamed Mazali between 1981 and 1986.

After assuming duties at the head of Tunisian embassies abroad, he returned to the leadership of the ruling party under President Zine el Abidine ben Ali and was appointed parliament speaker in 1991 and 1992.

However, Ben Ali quickly removed him, just like he did the majority of the symbols of the state in the era of his predecessor, Habib Bourguiba.

Beji returned to his law office; nevertheless, he remained a member of the Central Committee (RCD) of the ruling party until 2003. Caied Essebsi had spent a long time among the salons of politicians and businessmen, including a number of opponents of former President Zine el Abidine ben Ali. He had close ties to the brothers Kamal, Salahuddin and Raouf Lateif, successful contractors and real estate investors, and among the closest to the presidential palace in Carthage between 1987 and 1992. It was known that the Lateif brothers got distanced from Ben Ali after his second marriage with Leila Trabelsi. Essebsi was, thus, subjected to harassment because of these friendships; however, he chose to preserve these strong ties.

Soon enough, after the fall of Ben Ali in January 2011, Kamal Lateif and his supporters formed a pressure group for Beji Caied Essebsi's candidacy for the presidency of the transitional government in 2011, and supported him once more in the formation of his party and political project, which brought him to power at the end of 2014.

Today, the common priority among different political parties is clearly the preservation and the acceleration of presidential elections.

The smooth transition of power to the speaker of parliament highlights that all parties in the country respect decision-making institutions, the Constitution and laws governing the political life.

Along the Prime Minister Yusuf al-Shahid and the Ennahda party, which has announced that it is reconsidering the candidacy of the movement's leader, Rashid Ghannouchi, other populist leaders are emerging at the top of the political scene at a time where the strongest secular party, Nida Tounes, is suffering from interior divisions and the loss of its wisest leader.

The absence of a godfather, uniting secular politicians and the generation of the founders of the modern state over the past 60 years, leaves a political void that may cause an imbalance in the political forces in favor of rising populist parties.

The polls are headed up by some presidential candidates that can be described as populist. Among them is the owner of Nessma TV and the head of the newly created party, Kalp Tounes, Nabil el-Qarawi.

On the other hand, some consider that the furious Ben Ali'st, head of the Free Constitutional Party and a main populist figure, Abir Moussa, is another reckless populist who can disperse the secular votes. She gains popularity from criticizing the policy of consensus adopted by the secular Nida and the "extremist" Ennahda Parties, condemning governments of Habib al-Sid and Yousef al-Shahid to have failed people during the past years.

Last but not least, the death of Beji Caid Essebsi leaves the presidency vacant at a time of increasing tensions in Tunisia. The coming elections will thus highlight new political forces, alliances and opponents and most of all the prospects of the democratic path in Tunisia.