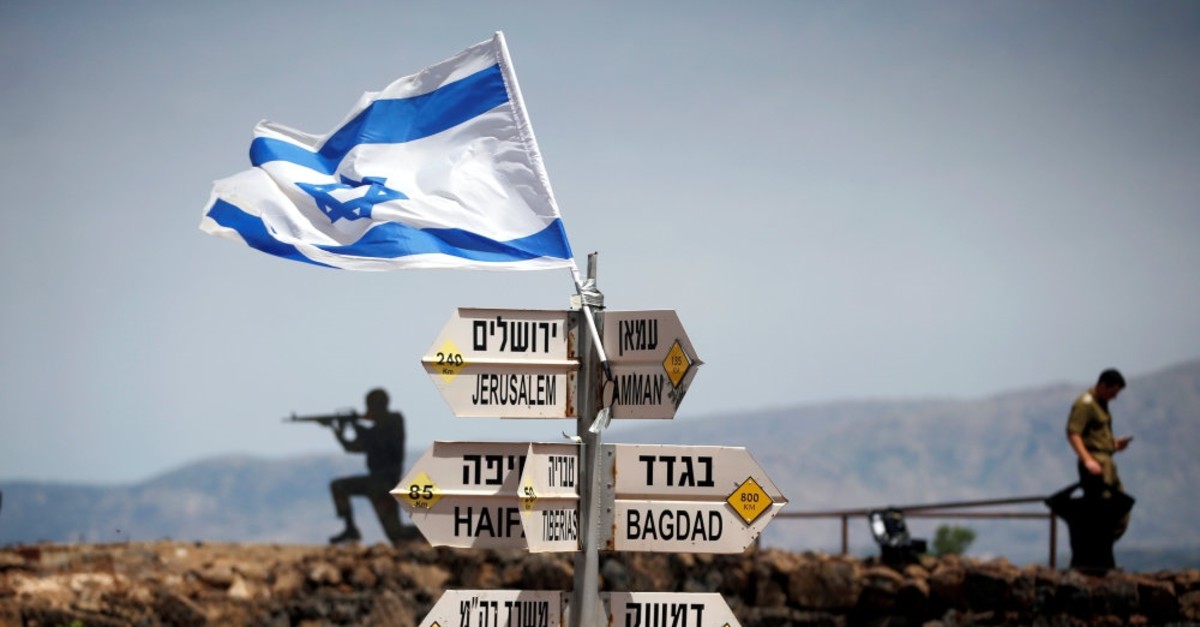 An Israeli soldier stands next to signs pointing out distances to different cities on Mount Bental, an observation post in the Israeli-occupied Golan Heights that overlooks the Syrian side of the Quneitra crossing, May 10, 2019.
by Ferhat Küçük Aug 01, 2019 1:18 am

Article 51 of the U.N. Charter confirms that the Israeli annexation of the Golan Heights is a serious violation of international law. This means the U.S. is backing an illegal move in the Middle East

Israel announced in 1981 that it had annexed the strategically important Golan Heights, which it occupied illegally in the closing stages of the Six-Day War in 1967. After having changed the demographics of the region through Jewish settlements over 50 years during which its occupation was maintained in defiance of international law, Israel went so far as to convene a cabinet meeting in the Golan Heights last year. Afterward, U.S. President Donald Trump hosted Israeli Prime Minister Benjamin Netanyahu at the White House and signed a decree that recognizes Israeli sovereignty over the Golan Heights. Turkey's Ministry of Foreign Affairs issued a statement that said Turkey regrets and strongly condemns the U.S. administration's decision. The U.N. Security Council, with Resolution 497 adopted in 1981, rejected the Israeli occupation of the Golan Heights.

It asserted: "The Israeli decision to impose its laws, jurisdiction and administration in the occupied Syrian Golan Heights is null and void and without international legal effect." Therefore, Israel's annexation is a clear and grave violation of international law, particularly Security Council Resolution 497. Again, the Golan Heights is referred to as the "Syrian territory occupied by Israel" in Security Council Resolutions 242 and 338.

Why is the Golan Heights so important for Israel?

Syria tried to recapture the Israeli-occupied Golan Heights during the Yom Kippur War in 1973, but Syrian forces were pushed back by an Israeli counterattack. Israel and Syria signed a cease-fire agreement in 1974 that left almost all of the Golan Heights in Israeli hands. In 2000, Israel and Syria negotiated a peace deal that would include Israeli withdrawal from the Golan Heights. But the initiative failed and there had been no development since that date until the Syrian civil war broke out.

Security and water resources are therefore among the key factors that make the Golan Heights important. The region has huge strategic importance in terms of security. In addition to its geostrategic location, the region also has rich water resources. According to some sources, the Golan Heights and the Jordan River, into which rainwater from the Golan's catchment feeds, provide around 50% of Israel's fresh water. Located only 60 kilometers from Damascus, the Golan Heights gives Israel an excellent vantage point for monitoring Syrian movements. Orthodox Jews increasingly regard the Golan Heights, which is under de facto Israeli occupation in violation of international law, as a sacred place since it is mentioned several times in Jewish holy books. There are more than 30 Jewish settlements on the Heights. Also defying international law, these settlements are intended to help ensure a Jewish majority in the occupied territory. Netanyahu has recently said, "Israel won the Golan Heights in a just war of self-defense."

What does the right of self-defense mean in international law?

Article 51 of the U.N. Charter recognizes the right of self-defense as follows: "Nothing in the present Charter shall impair the inherent right of individual or collective self-defense if an armed attack occurs against a member of the United Nations, until the Security Council has taken measures necessary to maintain international peace and security."

The same article also states that measures taken by members in the exercise of the right of self-defense shall be immediately reported to the Security Council and shall not in any way affect the authority and responsibility of the Security Council to take actions it deems necessary to maintain or restore international peace and security.

Again, one of the essential features of the exercise of the right of self-defense is the responsibility of accountability before both the U.N. and the world public. Another restriction is found in Paragraph 4 of Article 2 of the U.N. Charter itself: "All members shall refrain in their international relations from the threat or use of force against the territorial integrity or political independence of any state, or in any other manner inconsistent with the purposes of the United Nations."

The annexation is an example of a serious form of violation of international law, as per Article 51 of the U.N. Charter, without U.N. Security Council approval. And the U.S. administration continues to be a part not of the solution but the problem in the Middle East.