Manzikert: A battle that changed the face of world history 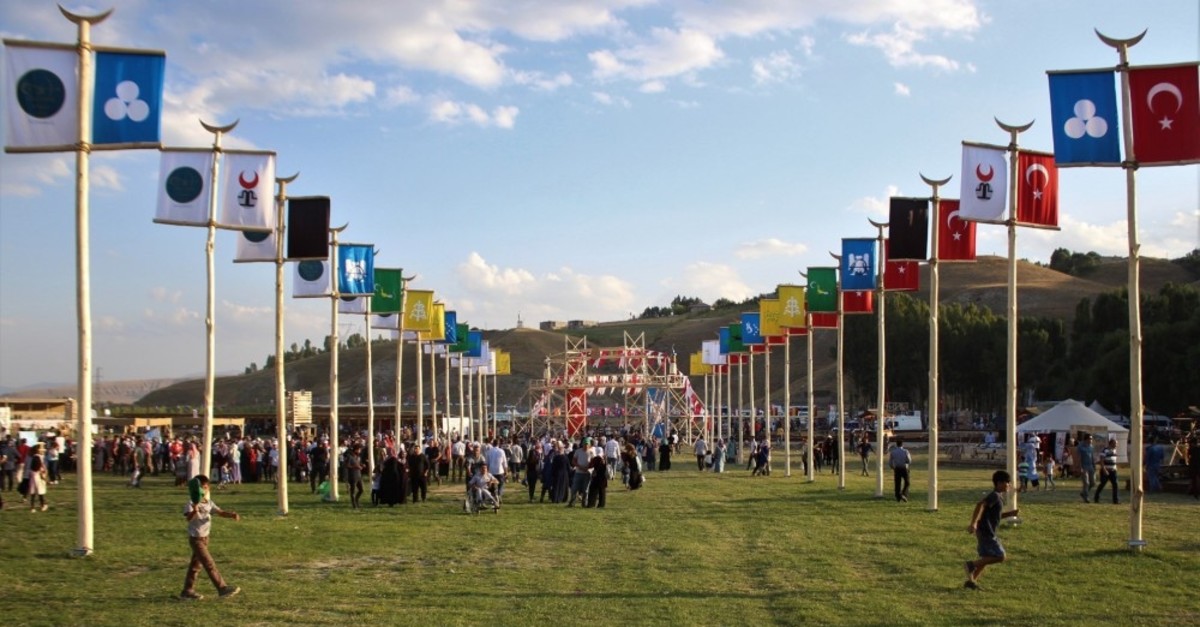 The Battle of Manzikert in August 1071 was not simply a victory for the Seljuk Turks, opening the gates of Anatolia for them, but a crucial historical moment that changed the course of world politics

Every year on Aug. 26, the entire Muslim world and Turks in particular, commemorate victory of the Seljuk Turks, led by Sultan Alp Arslan, over the emperor of Byzantium, Romanos IV, in the Battle of Manzikert in 1071. The stage of the battle, Manzikert is located in present-day Muş in eastern Turkey.

Just like the historically important battles of Hittin and Ain Jalut, the Battle of Manzikert was also crucial. Its results were felt for several centuries in the region. To precisely evaluate the outcomes of the very historic moment, the lifetime of Sultan Alp Arslan needs a brief examination.

After the death of Tuğrul Bey, the actual founder of the Seljuk state in 1063, a power struggle erupted because he did not have an heir to the throne. His nephew Muhammad Alp Arslan (1029-1072) would be chosen with the help of his minister Nizam al-Mulk, known for his intelligence, power of influence, and resourcefulness.

Alp Arslan, like his uncle Tuğrul Bey, was a fearless and skillful leader, and he took a special policy of consolidating his rule in the Seljuk-dominated country before looking to subjugate new territories to his state. It took almost seven years to establish the foundations of his rule and the stability of the state from the inside before making any external conquests.

On Aug. 26, 1071, preachers were heard all over the Muslim world, praying to Sultan Alp Arslan and his soldiers by the order of the Caliph Abbasid.

Causes for the change

Sultan Alp Arslan prepared a large army with the intention invading Egypt to rid it of the Fatimids. On the way, he besieged the city of Diyarbakır and took control of it, then besieged Alrha (today's Şanlıurfa), but he could not capture it as it was under the rule of the Byzantines. After that, Arslan took his army to Aleppo and took control of it from pro-Fatimid Mardasians. He then learned that the Roman Emperor Romanus Diogenes came out with a huge army to destroy the Seljuk state and end the Turkish presence in eastern Anatolia and Iran and then in Baghdad.

Alp Arslan immediately went to the east of the Euphrates. However, on his way, he lost many soldiers and equipment. He also ordered the demobilization of most of the troops that were exhausted and continued to walk a few with him to the city of Khoi in Azerbaijan. He sent his wife and his minister Nizam al-Mulk to Hamedan and did not think of returning to his capital and gathered his soldiers and called for struggle. He considered waiting for reinforcements would not be in his favor and decided to confront the huge army of Byzantines with his soldiers.

In his famous book "The History of the Seljuks," the renowned Iranian historian Isfahani says, "He remained with 15,000 horsemen of the elites of his men, and each one riding a horse and another by his side while the rum in more than 300,000 between Rumi, Russians, Oğuz, Caucasians, Abkhazian, Khazars, Franks and Armenians."

The Byzantines were greatly disturbed and annoyed by the movements and conquests of the Seljuks led by Alp Arslan in eastern and southeastern Anatolia. Emperor Romanos IV was determined to come up with a large army that would destroy the Seljuks and secure the borders of his empire.

The new emperor needed a great victory and success to prove himself as an emperor and assert his legitimacy. Even though he was a great leader and warrior and hailed from an eminent family, he did not descend from the dynasty but was crowned emperor after marrying Empress Edukia Makramboltisa, widow of Emperor Constantine X Dukas.

Historians differed in determining the number of members of the Byzantine army, some of them say that the army of the emperor had 200,000 soldiers of different races while some other historians say that they were 300,000.

However, most sources say that the Byzantine army numbered 300,000 against 15,000 soldiers with Sultan Alp Arslan, including 4,000 of what we might call "special forces" accompanying the Sultan.

The sultan arrived with his soldiers while the Byzantine emperor was camped in a place known as al-Rahwa, between Akhallat and Manzikert. Alp Arslan sent the emperor a messenger offering him a truce.

The emperor asked the messenger of the Sultan, Ibn Mahlaban, "which is more beautiful Hamedan or Isfahan?"

After attending the Friday prayer, Alp Arslan donned a white dress, held the tail of his horse, and delivered a speech to his soldiers.

"Whoever loves to follow me, follow me and those who want to go away, go away with my blessings. We are all equal in the service of Islam. I'm here not as the sultan who commands and or gives soldiers orders. I desire martyrdom. If I die in the battle, bury me in the same place and continue jihad [an Islamic term to define the struggle for the sake and in the name of Allah] under the leadership of my son, Malik Shah."

The two armies met and fought a fierce battle that lasted until the sun's demise. Sultan Alp Arslan was at the front of the ranks fighting with great courage. During the battle, the Seljuks carried out Turkey's famous war tactic and pretended to withdraw its soldiers while ordering other groups of soldiers to hide in positions close to the battlefield.

The Byzantine army thought that the Seljuks were retreating and followed them for a long distance, but they were unable to catch up with them due to a lot of equipment and the weight of their armor, while the Turkish cavalry was lighter and more agile.

Shortly afterward, hiding groups of soldiers began to surround the Byzantine army from behind in a crescent-like form. The Seljuks showered the Byzantines with a barrage of arrows and killed thousands.

Before sunset, the Seljuks won a clear victory over the Byzantine army, killing most of them, and the rest fled. Romanos was taken, prisoner. For the first time in history, a Byzantine emperor became the prisoner of a Muslim commander.

Sultan Alp Arslan scolded the emperor for not accepting the truce and insisting on fighting Muslims.

He asked the emperor, "What would you have done if I was brought before you as a prisoner?" The emperor replied, "Perhaps I'd kill you or exhibit you in the streets of Constantinople."

Alp Arslan replied, "What do you think I should do to you?" The emperor said, "There are three options. The first is killing me, the second is exhibiting me in your country, which I want to take from you, and the last one is not something you would do to me."

Alp Arslan asked the emperor what the final option was. "Forgiving me and accepting the ransom for letting me get back to my kingdom that is owned by you as a deputy in the Roman kingdom," the emperor said.

Alp Arslan said he chooses the last one, and uttered the historic words, "I forgive you and set you free."

Romanos was in shock as he did not expect such generosity from a rival. Alp Arslan treated him peacefully and respectfully. A ransom of 1.5 million gold dinars was later agreed upon; however, when Romanos returned to his capital, he was dethroned.

He wrote to Arslan, "As emperor, I promised you a ransom of a million and a half. Dethroned, and about to become dependent upon others, I send you all I possess as proof of my gratitude."

He could collect only 300,000 dinars, which he sent to Alp Arslan​ with a humble request to accept it. Sultan Alp Arslan pardoned the rest with his symbolic generosity.

When Emperor Romanos returned to his territory with the good sense of Islam, his courtiers deposed him, cruelly blinded him on June 29, 1072, and exiled him to Prote where he died of his wounds.

The news of the Seljuks' victory over the Byzantine army spread throughout the Muslim world and the caliph sent a letter to Sultan Alp Arslan congratulating him on a great victory and he titled him as the greatest sultan of the Arabs and the "Ajam."

Sultan Alp Arslan suffered an accident about 11 months after the battle; he arrested a hostile chief named Yousuf. When he was brought to be executed, he suddenly attacked Alp Arslan with a dagger.

The sultan was seriously wounded and died after a few hours on Nov. 25, 1072, at the young age of 44. He was buried at Merv next to his father Dawood Chaghri Bey. He was succeeded by his 17-year-old son Malik Shah.

Results of the victory

The victory of Manzikert is considered as the opening of Anatolia to Turkish tribes and clans. Sultan Alp Arslan allowed all commanders and tribal chiefs, who were with him in the war, to carry out offensives and conquests in Anatolia.

Anyone who would capture land was allowed to own and live with his clan on it. Thus the first period of Turkish Anatolia began to appear.

This was also a prelude to the establishment of the Seljuk Anatolian state or the Seljuk Rum. Then, the Ottoman Empire — the most powerful empire in Turkish history — followed its Seljuk ancestors.

The victory of Manzikert was also the beginning of the Crusades against the Muslim world. After the Seljuk state grew stronger and the Byzantine Empire was defeated, the European West realized that it could no longer rely on Byzantine and Rome to guard Europe's eastern door against Muslim attacks. So it began to think about conquest itself, and this resulted in the First Crusade (1096-1099) upon the invitation of Pope Urban II in 1095.