Who hit Saudi Arabia and what does the US want from Iran? 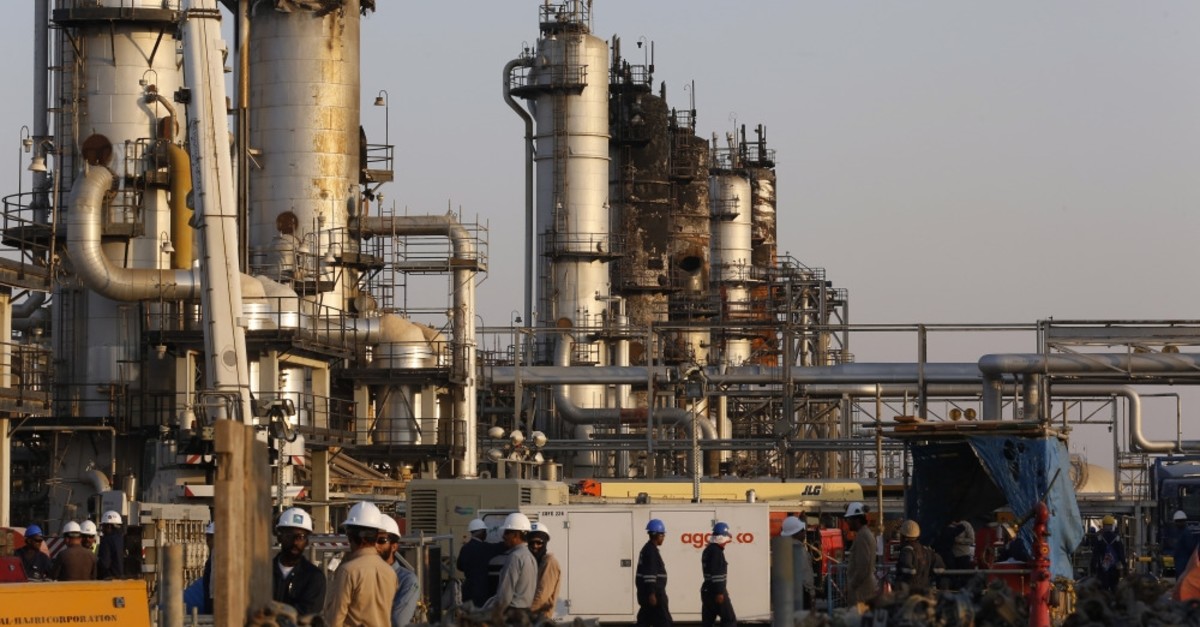 During a trip organized by the Saudi information ministry, workers fix the damage at Aramco's oil processing facility after the recent Sept. 14 attack in Abqaiq, near Dammam in the kingdom's Eastern Province, Sept. 20, 2019.
by Cafer Talha Şeker Sep 24, 2019 1:17 am

U.S. President Donald Trump declared his administration's decision to withdraw from the Iran nuclear deal in May 2018.

The Iran nuclear agreement was signed in 2015 but was called as "the worst deal ever" in U.S. history by President Trump. The CIA, in 2017, predicted that Iran might strike at American policy by launching an attack in the Persian Gulf if the U.S. government pulled out of the deal.

The New York Times Magazine published the CIA report on Sept. 4, 2019. It touched on a debate that has been a current issue in U.S. politics whether the president would meet with his Iranian counterpart at the United Nations.

Despite adopting tough discourse and launching sanctions on Iran, the White House has recently been considering starting negotiations with Iran again. When Tr

ump was asked last Wednesday if he would meet the Iranian president, he replied, "We'll see what happens."

Just three days later, all the world witnessed what happened as a Saudi oil producing area, the Aramco plant, was attacked by unidentified drones. Someone attacked Saudi soil where massive oil facilities are at work, threatened world oil prices and energy security, and seems to have prevented direct talks between American and Iranian leaders.

It is no secret that some circles in both Israel and the U.S. in recent years have been promoting an offensive strategy to launch against Iran to eliminate Tehran's nuclear capabilities. The goal presumably is to reduce and limit the Iranian diplomatic room for maneuver.

The actors that come out on top with the Persian cat cornered are the usual suspects like Iran's oil producing neighbors, who like to market their hydrocarbon assets with better prices, and the backers of the so called "the deal of the century."

Not to incriminate anyone but some are pointing to radical elements in the U.S. government causing the attack on the Saudi Aramco plants. So, the answer for "what the U.S. wants from Iran" is also part of the game that the allies want from America's Iran policy.

Within this complex situation between a clash of interests and common interests, the U.S. decision making organs and allies in the Middle East pressure Iran will naturally cause unrest in European security as well.

The attack on Saudi Arabia came ahead of Iranian President Hassan Rouhani's visit to Turkey to meet his Turkish and Russian counterparts for regional conflicts after France offered a lifeline to Iran by offering a credit line of $15 billion guaranteed by Iranian oil in return.

France would organize the financial support by the United States to permit the credit line to Iran. In return Iran would bring back the nuclear deal terms, open negotiations and not threaten the security of the Persian Gulf. The active involvement of French President Emanuel Macron in Iranian geopolitics naturally preoccupies the Americans, who consider the 2015 deal to Europe's benefit rather than America's, even though the U.S. administration has not hurried to either back or refuse the French good offices.

France was one of the biggest investors in Iranian oil and other sectors as billions of dollars of Iranian-French commercial deals were made after the nuclear deal was signed.

Hence, in the long run, it is in French national interest that the Élysée Palace's involvement be indispensable in bringing Iran to the Western table either way. On the other hand, Trump has also begun to consider preparing a meeting with his Iranian counterpart soon at the U.N.

So, the attack happened not only during Rouhani's visit to Turkey to meet Russian President Vladimir Putin but also before his visit to the U.S. to meet the American president. Iran then declared that the presidents will not meet because of the American accusations.

Considering the Iranian case from a historical perspective, one might see that if Iran will come to terms with the West, Anglo-American oil giants and French Total need to save their pre-revolution concessions or negotiate on them.

In the past, both the rivalry and collaboration in Iran were conducted between three Western powers, the U.S., the U.K. and France, who are permanent members of the United Nations Security Council but today, the other two permanent members, Russia and China, are waiting for Iran in the global market. A great competition on arms sales to Iran might begin as Russia and China are ready for this.

Iran at peace with the West is a potential menace to most other Gulf oil producing countries as their geopolitical value will be redetermined in line with Iran's situation. It can destroy or reduce the capacity of the current Arab-Israeli common interests in Middle Eastern geopolitics.

Since the beginning, President Trump's policy against Iran and right after the recent attack on Saudi Aramco, accusations made by the U.S. Secretary of State and ex-CIA Director Mike Pompeo on Iran reveal that American policy is still not enough for a deal that protects American interests in the Gulf more than Europeans.