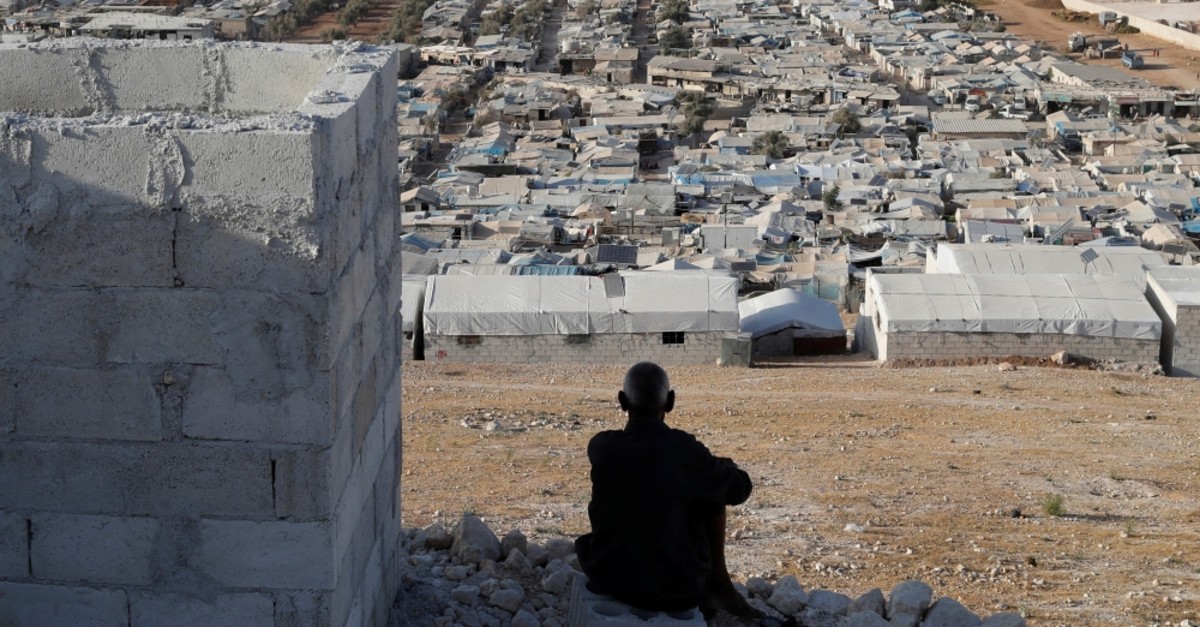 An elderly Syrian man sits overlooking the Atmah camp for displaced Syrian people, near the border with Turkey, Syria, Sept. 25, 2019.
by Mojtaba Barghandan Oct 02, 2019 1:25 am

In an internationalized economy, where the underlying liberalist understanding of interstate relations become the trademark, international cooperation is in fact challenged by the consequences of new capitalist forms of exploitation under a specific frame of inter-dependencies.

These new forms have either created apprehension in the state and nonstate actors besides nongovernmental organizations (NGOs) or became an instrument for the great powers to increase their surplus-value. The international political system is more than anarchic; widespread uncontrolled chaos governing the globe, shattering the foundations of sustainable international cooperation and international relations while the presupposed central authority, that is, the U.N., as the post-World War II legacy, has not been able to enforce rules and regulations.

As an effect, sovereign states have been affected differently in terms of their share of such a complex condition. This has brought up the emergence of new coalitions, alignments and line-ups in particular against the interests of geographies, the countries of which have been targeting each other's interests. Influenced by such lingering insidious death of goodwill in interstate cooperation, formation of a sort of greater constellation in international relations is averted.

The sharp gap between the concepts and realities is, in fact, the root cause of the challenges. While the actors' preferences are neither identical nor irreconcilable, international cooperation as an entity, which is the step forward in partnership and interdependency, whether it is on economy, politics or on other issues of significance such as security and human rights, won't be able to define interactions to achieve common and collective objectives.

The widespread political and economic inequalities, at least, since the aftermath of World War II is proof of sagging achievements in this respect. Essentially, the existing understanding of international cooperation based on a vague consensus has not been able to provide grounds for the development of tangible cooperation.

Geographic locations would sometimes leave no chance for some states but to cooperate even when their benefit of cooperation may be much less than the partners.

The states' binding agreements with each other in particular with the nature of agreements inked between great powers and more of developing, under-developed countries and least developed countries have, to some extent, prevented the development of sustainable international cooperation although these agreements have delivered some major progresses on the surface.

The success of every state to gain domestic political support for cooperative policies is also a matter of significant impact on the agenda for international cooperation since the nation dissatisfaction of the state's share of cooperation would potentially hinder the state's intention for an active or positive role in the process.

These factors have so far had dual effects; they not only put constraints on some states' aptitude or intention for cooperation but also leave no chance for some states but to cooperate based on subjugation by others. That is, there is a sharp difference between the realities we encounter around the globe with the theories and concepts in defining international cooperation.

Cooperation among states is not a new phenomenon nor is the differences in the agenda, preferences and priorities of the states' foreign policy. However, the impact of the international political system on foreign policy of states is undeniably sensitive and determinant.

The proof of this argument is the nature of interaction among its units; that is, the state and nonstate actors as well as international organizations and NGOs, is marked by the intention of a bigger section of the globe to exert pressures of any sort through any instrument on the much smaller portion of the globe based on many irrelevant and fabricated bases.

The tussles over power exhibited by the great powers since post-World War II and in particular the post-Cold War era and their hunger and thirst for more control of the Mideast through creating new proxies or consolidating new allies and/or coalitions with some of the Persian Gulf Arab states plus Israel has not only negated and deactivated the bases of regional along with international cooperation but it has also left seriously ineffective the diplomatic efforts of a very small numbers of states in reviving those bases; even if such a condition may be defined as the necessity for the survival of international relations and/or global politics.

Surely, waging war on Yemen, Iraq and Syria, for instance, or maximizing pressures on Iran through imposing sanctions, which, to me, has not been unilateral in essence, or the supporting of an occupying regime; that is, Israel in the region, would not only soon leave no reason for some states to respect and follow the existing principles of international political systems but also would erode the foundation of interstate cooperation and sap people's confidence in the advantages of cooperation.

The rhetoric used by some of the heads of states in their addresses at the 74th session of U.N. General Assembly is proof of this claim. The rhetoric indicates more threats of taking revenge and the application of nuclear weapons.

To conclude: firstly, concepts have not been able to accommodate global politics with the accepted or desired norms. Secondly, existing internationally accepted regulations have led the globe toward some ill and damaging forms of cooperation and interaction.

Thirdly, the current U.N. charter is undeniably fragile and too ineffective to tackle and curb the ongoing global challenges even with a partnership approach. And lastly, the international political system needs urgent revival through promoting policies that can curb shared international challenges for the development of sustainable international cooperation based on the equal share of advantages; otherwise, states with no or the least share of the advantages of international cooperation will either question the credibility of the international political system or take the necessary actions to end the great powers' political and economic hegemony, since the current situation is not the outcome of a leadership based on equality in partnership and a win-win approach in the interdependence approach.